“Motel”—the third act of America Hurrah by Jean-Claude van Itallie—is at last something new. Perhaps one should temper one’s impatience for novelty in a form in which so many of the rudiments of ordinary competence are often lacking—and yet what a rare pleasure it is to see a work freshly conceived. But what we have missed even more than originality of conception has been the sense of our own time, our own country. Nearly everything worth commending has in the past few years come to us from England. Of course in the arts there is no need fortunately for nationalism or imperial competition, nevertheless a country and a people are ennobled by those arts that bring into form and coherence the chaos of daily life and living experience. “Motel” is not exactly a drama; rather it is a sketch, or an image. It is brilliantly theatrical and most peculiarly American. The cast is just a voice, that of the Motel Keeper, who drones on and on without regard for the action. The characters are two hideous, speechless, life-size dolls: a mature, gross, rubbery couple, two figures from the mud of the present, fascinating constructions of anarchy and compulsion.

The scene opens on a tacky little motel room and the droning voice of the Motel Keeper. It is her function to give the cover story, our cover story—the endless commercial by which our existence is explained, glorified, and sold. She combines in almost every sentence the claim of an unnecessary and fragile newness combined with a fraudulent oldness. “It’s a nice room, not so fancy as some, but with all the conveniences. And a touch of home. The antimacassar comes from my mother’s home in Boise. Boise, Idaho. Sits kind of nice, I think, on the Swedish swing.” The dolls, the dummies, are the object of all this never-ceasing solicitation. They come into the motel, bent, no doubt, upon some obscene assignation. Wordlessness is the very skin of their nature and they never speak. They are beings of constant action, creatures of devastation, breakage, and defacement. Their destructiveness has an anarchic sexuality about it: bed, toilet, and dirty words; magical obscenities are scrawled with lipstick on the walls, just as the cavemen drew their bulls and swimming deer in the dark chambers of prehistory.

The Motel Keeper continues, “There now…. There’s a button-push here for TV. The toilet flushes of its own accord. All you’ve got to do is get off. Pardon my mentioning it, but you’ll have to go far before you see a thing like that on this route.” When the woman doll enters she goes into the bathroom, flushes the toilet. Soon, “pieces of her clothing are thrown from the bathroom…. Now the toilet articles and the fixtures from the bathroom follow the clothing.” The man doll jumps up and down madly on the bed. He strikes the objects in the room with a cigar. The Motel Keeper’s voice continues to name objects and things, as a sort of creation, which, in a simultaneous death, the dummies destroy. The naming is a victory of an unimaginably free enterprise: “bottles, bras, breakfasts, refrigerators, cast-iron gates, plastic posies, paper subscriptions…clitter-clack darning hooks…cats, catnip, club feet, holy books….” The dolls do the twist, tear the bedspread to bits, smash the pictures, pull down the plastic walls, while the voice continues, “didies, total uppers, basting tacks….”

The work is extraordinarily funny and terrifying. Gratefully you notice that the play and the beautiful direction by Jacques Levy do not surrender to the temptation to instruct. In a version of the script, printed last year, it is otherwise: at the end, in the midst of the devastation, you are to see “an available object of incredible beauty,” perhaps a painting by Vermeer. What a piece of good luck that this was deleted. Our didacticism has its counterpart in Soviet Art and perhaps comes from the same spirit of rationalistic puritanism. The dolls are a fairy tale. They represent something hidden and yet of the greatest simplicity about things and the consumption of things. And in their destructiveness there is no particular distress to them, to the Motel Keeper, and most importantly—no distress for us. The motel and its objects, its improvements and features, were not built to survive sun-up in any case.

IN HAROLD PINTER there is no tendency to the moralistic italicizing that marks the American theater. He avoids exposition in the ordinary sense and is not seduced by affection for pieties. The Homecoming * is indeed difficult, and one of the most interesting works to reach New York in some time. It is acted and directed with such beauty and rightness that the gray monotony of the scene has an exhilarating effect upon the spirits. The immaculate dialogue has a life of its own, beyond the movement of the plot; it is an original contribution to the contemporary theater, a discovery in the use of language for the stage. Once you truly hear Pinter’s dialogue, you begin to hear it outside the theater, in the taxicabs, on the telephone. It is the poetry of bare, insistent repetition:

How are you Uncle?

Not bad. A bit tired.

Tired? I bet you’re tired. Where you been?

I’ve been to London Airport.

All the way up to London Airport?

Yes, all the way up there….

It may be that the justification for his dialogue lies in the strange statement of Ruth, the young woman of the play. “My lips move…Perhaps the fact that they move is more significant than the words which come through them. You must bear that…possibility…in mind.”

Pinter is, like Beckett, an intensely masculine writer. The bareness, the plainness, the silences are not mere devices: they seem to be expressions of an imagination peculiarly stripped of decoration. Speech and movement are minimal; the setting is in many ways more important than the actual content of the dialogue. The flat in The Caretaker, the underground room in The Dumbwaiter are in themselves a great deal of the significance of the play. (I do not mean the way in which the settings are executed by stage designers, but the power the place has for Pinter.) In The Homecoming the four quarrelsome, unappetizing men live in a large, gray, nearly empty room, which gives on to a hall where one sees an oddly sinister, long stairway. The setting is extraordinarily provocative, even though it is empty, dusty, realistic—not in the least one of those expressionistic constructions. What the set represents, with the men lounging about in horrible discomfort and ugliness, is not bachelorhood but a domesticity that has declined and decayed. And indeed this is the house in which three sons were reared and in which the father’s brother-in-law also lived. There had been one woman, the wife and mother, Jessie. So the stairway led to the marital bed, to the room where the boys were yelled at and bathed and beaten and tucked into sleep. Now, empty cupboards, dirty glasses: you feel the gray sheets hidden upstairs and the grease in the oven. The two sons, Lenny and Joey, are strangely lingering on at home. The father Max and his bachelor brother Sam are also waiting, lingering.

Into this empty grayness the third son, Teddy, comes suddenly, with his wife, Ruth. Teddy is a “doctor of philosophy” at an American University. He and Ruth have three sons whom they have left at home. Ruth is laconic, cool, self-possessed. She is distant in manner and yet gives promise of the utmost availability. Indeed she had been a whore before her marriage and the plot of the play begins rather slowly to develop its shape. Ruth, entering the world of discontented men, does not represent hot biscuits, sofa covers, and curtains. Indeed she does not seem particularly gifted in the “domestic sciences.” Yet she is clearly some strange sort of wife-mother figure and the plot is merely her decision, taken in front of her husband and with his consent, to stay on in the house with the men, to clean and cook, and to be some sort of lover to each of the men, and “for a few hours in the evening,” to earn money by being a call-girl in the stable of one of the brothers. “She will have to pull her weight a little,” as her husband says.

IN ALL OF PINTER’S PLAYS, the more or less realistic core, the everyday cadence of the dialogue, invites the audience to strain for a realistic interpretation. It does not seem to me that this effort is wasted, even though the plot will never fill out entirely. For it is characteristic of these plays that they are not symbolic or distorted; they are instead prosaic, recognizable, but unexplained. The moving of the lips truly does mean more than what is said. You do not doubt that things are the way they are on the stage, but you do not know why they should be that way. In The Homecoming, the mind is asked to believe that Ruth would leave her husband and sons and stay with this disgruntled, unpromising group of men she has “come home to.” We are asked to believe that she would actually be a prostitute—and that her husband would consent to the “proposal.”

The dead mother, Jessie, who lives in the play as a dramatic absence is at one time described as a good mother and wife and at other times as “a slut” and “a bitch.” At the very end, Sam the brother-in-law tells of her infidelity with MacGregor, who had long ago worked in the butcher shop with Max. “MacGregor had Jessie in the back of my cab as I drove them along.” And Ruth, for instance, makes very clear demands in return for the money she will earn as a call-girl. What are the demands? They are the same currency in which husbands “pay” for the favors of their wives. “I’d need an awful lot,” Ruth says. “Otherwise I wouldn’t be content.” She wants an apartment with “conveniences.” And have we not been told recently that our poor President forfeited his life because Marina Oswald was denied the “conveniences” which are part of the sexual contract?

The acting of The Royal Shakespeare Company and the direction of Peter Hall are of such splendor that one cannot question anything. In the end, the play is profoundly suggestive of something we know to be true about men and women even if it cannot be reduced to “motivation.” Motivation is after all a conjecture and what you are told in art is a fact, a fact, however lonely and unsupported, that convinces. 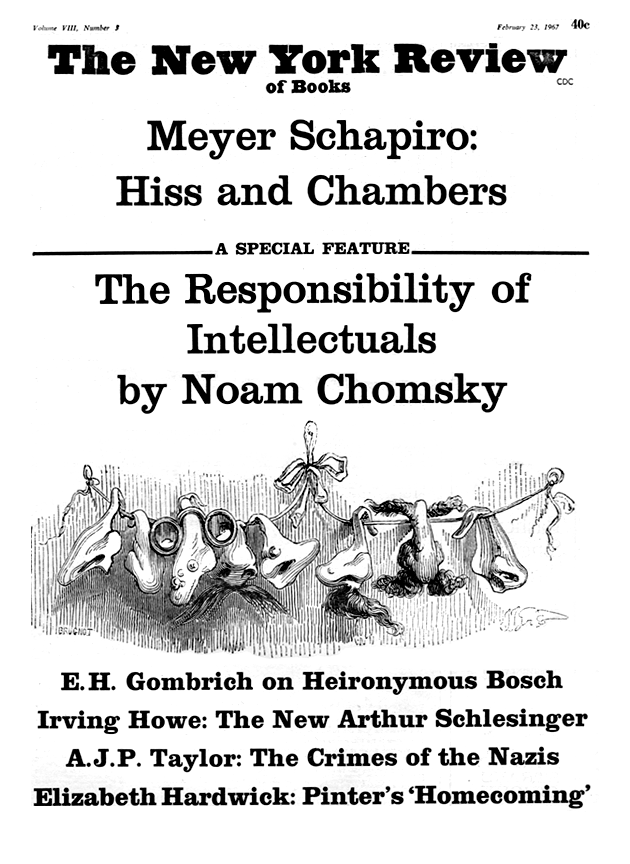 Elizabeth Hardwick (1916–2007) was born in Lexington, Kentucky, and educated at the University of Kentucky and Columbia University. A recipient of a Gold Medal from the American Academy of Arts and Letters, she is the author of three novels, a biography of Herman Melville, and four collections of essays. She was a co-founder and advisory editor of The New York Review of Books and contributed more than one hundred reviews, articles, reflections, and letters to the magazine. NYRB Classics publishes Sleepless Nights, a novel, and Seduction and Betrayal, a study of women in literature.

The Play that Dare Not Speak Its Name

‘Something Wonderful Out of Almost Nothing’

The psychological insight of Maurice Sendak