Some books, perhaps some authors, resist the reviewer if not the reader. The reviewer, that show-off drudge, is perhaps a man who hates to make up his mind and thus compulsively gets into positions where he has to do it. And the reviewer also thinks he ought to be a critic. He ought to have the further nerve to become conscious of his like or dislike. This is not so easy as it might seem to us when we think we are doing it in conversation: “How did you like it?” The reviewer wants to describe a book, analyze it, say where it belongs in the range of the author’s work and in the range of literature; he wants to say why it is there, where it came from, and where it seems to be going. Books can’t be put through a quantitative analysis, and the road test of a play is not the same as the road test of a new kind of automobile.

Either you feel yourself into the center of a book, always a rather frightening and surprising experience if it is any kind of book at all, as surprising and frightening as the revelation in a fight or a new love—or you don’t. If you do, you then have to think your way out again, and that can be hard work. Some books resist all this.

Norman Mailer’s Cannibals and Christians was published nearly a year ago, and the following brief notice is the first this journal has carried. I don’t know how many reviewers have jilted or failed my editors over this book during these months, but I hereby fail them now by offering a notice rather than a proper review or a proper piece of criticism. A notice is also offered of Norman Mailer’s play, The Deer Park, which opened weeks ago. I will even include here for notice the title The Presidential Papers by Norman Mailer (1963), unreviewed in this paper; Mailer prints, in Cannibals and Christians, his side of the correspondence with the paper about this omission, and lists the eleven people to whom he sent carbon copies.

THE PLAY dramatizes the central plot of Mailer’s novel The Deer Park (1955). It is a good evening of theater, and seems to prove again the assertion that our novelists could write our playwrights off the stage if they only cared to. And yet perhaps it also shows why they don’t care to do it. The theater at last gets the best of the author. The play is excellently produced, and although it seems much too long, it keeps jumping around like popcorn popping. The actors look so much like the people in the novel that it is almost spooky. The general scene is convincing, as if this might be what Hollywood really was like back in the old days of movie czars and movie queens and UnAmerican Activities Committees. Hugh Marlowe as Eitel, the blacklisted movie director, has a splendid authority; so few American actors are able to give the impression of intelligence. The actors are all good: Gene Lindsey as Sergius O’Shaughnessy; Rip Torn as the hipster Marion Faye, in scary black leather pants; Beverly Bentley as the Marilyn-like Lulu; Mickey Knox as the villainous Munshin; Rosemary Tory as sad Elena; and especially Will Lee as Teppis, Head of Supreme Pictures. Teppis, aloft over all the action, sits on his throne which is a baroque chaise percée, and being totally corrupt, corrupts them all. But at the same time, he is endearingly comic. The orgiasts are endearingly campy, ‘Munshin is endearingly villainous, with his big cigar, his cocky Mickey Knox strut. Even Elena is endearingly mixed-up, she just can’t stay out of beds.

In fact, instead of being alluring or horrifying, the vices as presented here seem only little human weaknesses, often very funny ones. And the final effect of the play is not apocalyptic, as the ringing bells and the big bang and the windy speeches try to make it. Rather it seems to declare good homely morals. Do not sell out for money and do not be unfaithful to your sweetheart or you will be unhappy and die of a heart attack. The big speeches—those windy ideas that Sergius O’Shaughnessy spouted in the novel and which were so important in the development of Mailer’s rhetoric, that rhetoric which rises to a power nearly Faulknerian in “Advertisements” and in “The Time of Her Time”—these speeches on the stage seemed to me embarassments, as were the dialogues of affection. In these Eitel and Elena, after the modern convention, exchange avowals of the amplitude of their sexual responses rather than saying, as heroes and heroines used to do, that they love each other.

They are touching, though, these characters, and they make one feel that their problems could so easily be solved if only they had learned that other, simpler way of talking, and if, perhaps, they had at an earlier and less impressionable age learned something of the varieties of sexual experience. The comedy, then, is really comic, a comedy of manners in Old Hollywood, and quite effective on the stage. But the author meant far more than that.

IT IS THIS “FAR MORE” which makes Mailer’s books resist the reviewer and the critic. Like the writers of the old Modern Literature days, like Yeats and Pound and Joyce and Mann, he has to invent systems of thought. He makes up for himself a theology, an economics, a politics, an architecture, a psychology, and even a pharmacopoeia. As Norman Podhoretz, one of the few good critics who have given Mailer serious attention, has said, Mailer seems to have to learn everything for himself, to recapitulate all intellectual experience no matter how outmoded it may be. And he puts it all in, piece by piece, as he learns it. His chief current preoccupation is the theology, which Podhoretz describes as a “fantastic collection of ancient Christian heresies.” These heresies, a kind of homemade Manicheanism in which God and the Devil struggle in various ways, provide a theme of sorts for Cannibals and Christians. The book is another of Mailer’s miscellanies, like Advertisements for Myself and The Presidential Papers. It contains some of his political reporting, for which that worn word “brilliant” ought to be reserved from its easy misuses; this writing really is “brightly shining, glittering, sparkling, lustrous…splendid, illustrious, distinguished, striking the imagination.” He picks off the Republican leaders one by one with a total and merciless accuracy, physical description so intense that the entire soul seems to be laid bare in every visage. Rockefeller: “He had a strong decent face and something tough as the rubber in a handball to his makeup, but his eyes had been punched out a long time ago—they had the distant lunar glow of the small sad eyes you see in a caged chimpanzee or gorilla.”

The book has also short stories, essays, book reviews, letters, running comments, interviews, and, alas, a number of those strange little squibs of words running pointlessly down the page which Mailer thinks are poems. For them he has the unattractive and apt name of “short hairs.” The miscellany is a good form for Mailer. Everyone interested in the life of the mind in our time should read this book. But it is less than a triumph to say, as he so honestly does speaking of his choice of a form for one piece, this which could also stand for the book as a whole:”…it is easier than an essay…. You see, my mind wanders. It dissipates. I have no patience left for quiet exposition. In an essay you must obey formal concerns which I have not the enthusiasm to obey any longer.”

In criticism you must quietly expound the ideas of the author and their connections with his form, his matter. If Mailer has not the patience to try for these connections, neither has his reviewer. Let the collection stand as a miscellany, the bright and the dark, the rich and the empty. The man is there, pugnacious, abusive, battered, out on a razor edge talking a blue incoherent streak, and endearing. 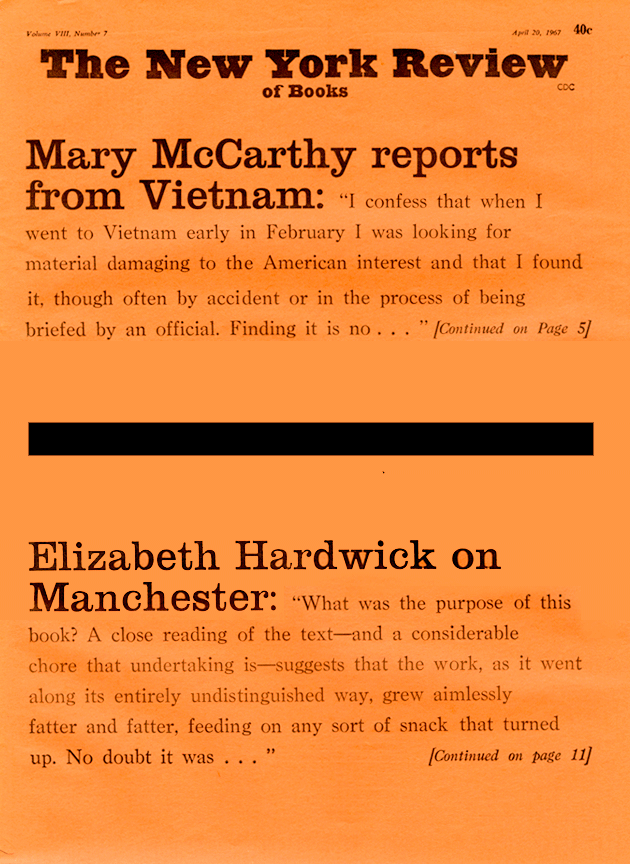