In his comment on my book, The Atomic Bomb and the End of World War II [NYR, June 15], Gar Alperovitz writes that I come “close to being our official national diplomatic historian.” I don’t know how close that is supposed to be. But I should like readers of his article to know that this book was an entirely private and independent undertaking. No one in the government, or former member of the government had anything to do with its inception; nor did any of them pass upon the manuscript. I was under no obligation to defer to any official or official opinion, nor did I. No branch of the government (not even the CIA provided a dollar toward its production. Long before the book was begun my last connection with the government had ended.

I have the impression that Alperovitz attributes my uncertitude about various hypothetical “options” to my wish to spare friends or former associates. Could it be due rather to knowledge that in decisions upon which so many considerations bore, what is known justifies only surmises, not certitudes? Sometimes decision-makers do not themselves clearly know the relative impact of the many ideas or calculations which influence them. Sometimes what may appear in the calm of the study years afterward to have been a genuine “option” at the time, was not actually so in the hot flux of events.

Alperovitz also seems to impugn my judgment because of my previous personal or professional connection with some of the chief figures in the narrative. Might that rather not have caused my interpretation of complex circumstances to be closer to the whole truth than any derived from the available record, even were it impartial?

Who, if he did not know it, would gather from reading his article that a bloody and dreadful war was being fought, that each day it continued meant agony to our combatants as well as to the Japanese? Who would gather that the fanatic military leaders preferred death to acceptance of defeat?

In short, this essay illustrates how preconceptions assist hindsight; they act as a focus which selects the conclusions.

May I take this chance to state that one of my main efforts at present is to induce the American government to make the records of the diplomacy of the recent past available to all, more quickly and fully. My latest attempt to arouse interest in the purpose is an article in the January, 1967 issue of Foreign Affairs, called “The Shackled Historian.” Perhaps Alperovitz and his colleagues in the Kennedy Center will take up the cause.

Since Alperovitz, like myself, is interested in the origins of the cold war, will he not call on the Soviet government—which he apparently thinks was merely the hapless object of our vicious diplomacy—to do the same? Without the Soviet documents and memoirs all accounts of the cold war must be lopsided. Were they to be published, I do not think it possible that Alperovitz could continue to write in the same vein as he does now.

Herbert Feis’s letter is strangely ambiguous: The trouble is that like his book it never quite faces fundamental issues squarely.

My review attempted to document three specific points about the Hiroshima decision: (1) By July 1945, before the atomic bombs were used, other courses of action seemed likely to end the war well in advance of the planned November landing; (2) This is true not merely in retrospect: We now know that a variety of other courses were offered directly to the President by his highest official advisers before Hiroshima—at a time when he was also shown intercepted cables revealing Japan’s willingness to end the war on acceptable terms; (3) The main reason other possibilities were passed up appears to be that implicitly or explicitly a demonstration of America’s new power was judged necessary to strengthen the U.S. hand against Russia. The bomb was a “master card” of diplomacy, in the words of Secretary Stimson; it would make Russia more “manageable,” according to Secretary Byrnes.

Characteristically, Mr. Feis does not directly dispute any of the documents, facts, or arguments offered in support of this view.

Neither do his comments about Soviet documents relate to the main point at issue (although, of course, as a historian I welcome his efforts to obtain further historical materials).

When Mr. Feis does touch on a point of substance, he does so in a curiously defensive way. I mentioned his official connections and privileged access to inside information not to impugn his motives. Rather I wished mainly to stress that an established historian—not an ill-informed layman, not an inflammatory publicist—has reached important new conclusions about Hiroshima: It is significant that an expert of Mr. Feis’s stature—who has private information not available to other scholars—has come to understand there were other ways to end the war. And he has written that President Truman “probably,” and Secretaries Stimson and Byrnes “certainly,” viewed the bomb as a way to bolster the US diplomatic position against Russia.

In sum, Feis’s book marks a major shift in the accepted view of America’s use of the first atomic bomb (although the shift is unfortunately shrouded in rather vague phrases). My review attempted to cut through to underlying evidence to show that considerations related to Russia were absolutely central to the Hiroshima decision. His response, I had hoped, might contain documented, expert objections. Regrettably, however, his general remarks about preconceptions and hindsight once again define a position of ambiguity. We are left to puzzle whether Mr. Feis is withholding such objections as he has, or whether, in fact, he holds no substantive objections at all. 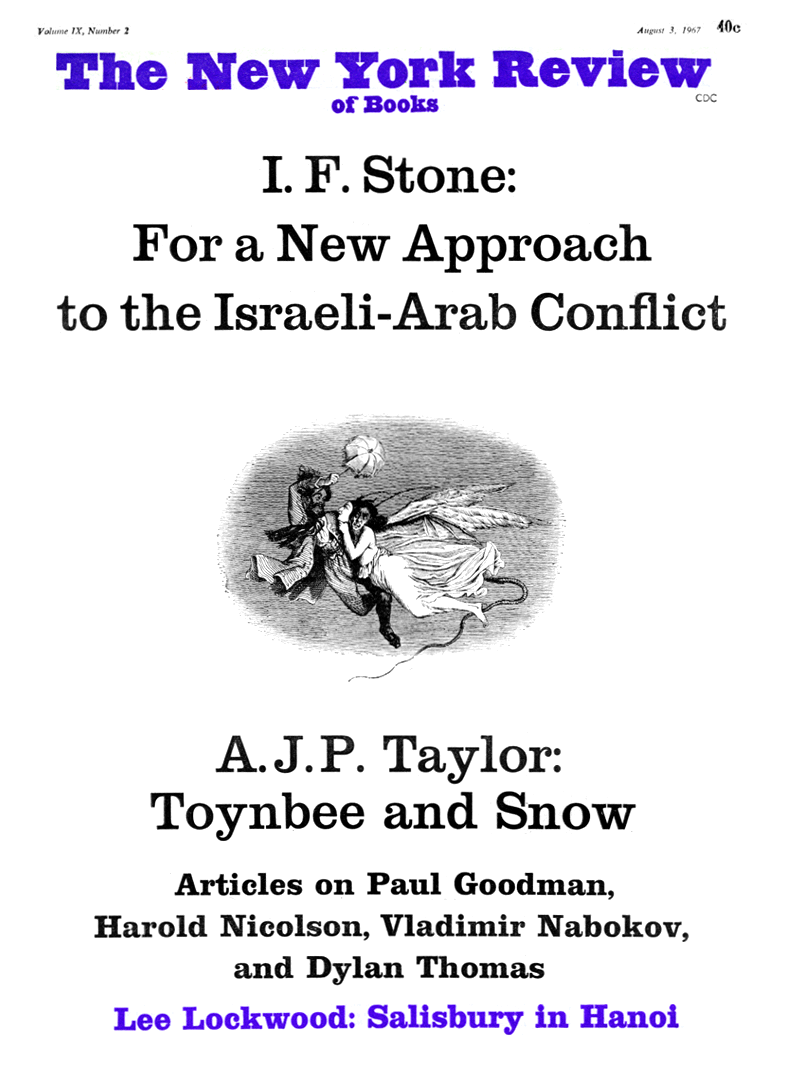