As an (expatriate) Englishman, may I suggest that Steiner’s Language and Silence could have been reviewed much better by an American? The stock English response to Steiner is, “Come now, don’t exaggerate, let’s keep our sense of humor,” and D. J. Enright [NYR, October 12], though he scored some sharp points, was too prejudiced against Steiner’s manner to come to interesting grips with his matter. For instance: Steiner is much less silly about “comparative studies” than Enright’s running commentary would suggest. “Scott is to be seen in relation to Hugo, Manzoni, and Pushkin….” Why not? If there is something to be said for Scott’s novels, this might be a way to get at it. “The problems of form and consciousness met by the Spanish poet in Mexico are to be compared with those of the Anglo-Indian….” Again, why not? There is a lingua franca of modern poetry, shared by writers in widely separated places, that makes such an approach perfectly sensible, even conventional. “To value Pope without a sure grasp of Boileau…is to read thinly or falsely.” (Steiner, followed by ironic asides from Enright.) I’d be inclined to substitute Horace for Boileau, but I’d take Boileau. The best recent book on Pope, Reuben Brower’s Pope: The Poetry of Allusion, works by measuring him against his foreign masters. (Pound, a sadly unenglish type, has had the same bad habit of using foreign literature. Would Enright study Pound with no reference to Greek, Latin, Chinese, Italian, Anglo-Saxon, French, etc.?) Only “an extremely rare bird,” Enright complains, could profit from the type of study Steiner proposes. Well, yes, comparative literature (a rude word only in England) is for rare birds. The rooster had better, as Enright recommends, stick to a couple of plays of Shakespeare and be taught that Pope existed in a safe English vacuum.

Steiner has a footnote (page 233) in which he speaks of the danger that England “folds inward into a kind of ‘post-Habsburg’ provincialism.” I wonder if Enright marked it? I can see why he didn’t quote it.

So the student, for whom Scott is likely to be a minor figure and a minor problem anyway, is to study (in translation) Hugo, Manzoni, Pushkin, to find out whether Scott is a good writer…? Where Pope is concerned, the student is to achieve “a sure grasp” of Boileau, presumably as a poet (therefore in French) since we are talking about poetry…. The answer to Mr. Carne-Ross’s reiterated “Why not?” is “Because there isn’t time”; and in some cases, “Because there isn’t much point.” This sort of treatment of literary texts generally results in educated illiteracy, in students who know all about “ideas” without having felt one. If anything, I suspect I was overgenerous toward “comparative literature” as an undergraduate course: it is probably a soft option. Hence my reference to the greater value, the greater meaningfulness, for English-speaking students, of deep immersion in a couple of Shakespeare plays.

In his last paragraph Mr. Carne-Ross seems to be barking up the wrong tree. I too am an expatriate. I know personally quite a number of Indo-Anglian poets (and their chief problems are writing good poetry and getting people to read it). I have written on German, Japanese, Chinese, Italian, and French literature. I admit, though, that as an undergraduate I studied English literature, and as a teacher I teach it. 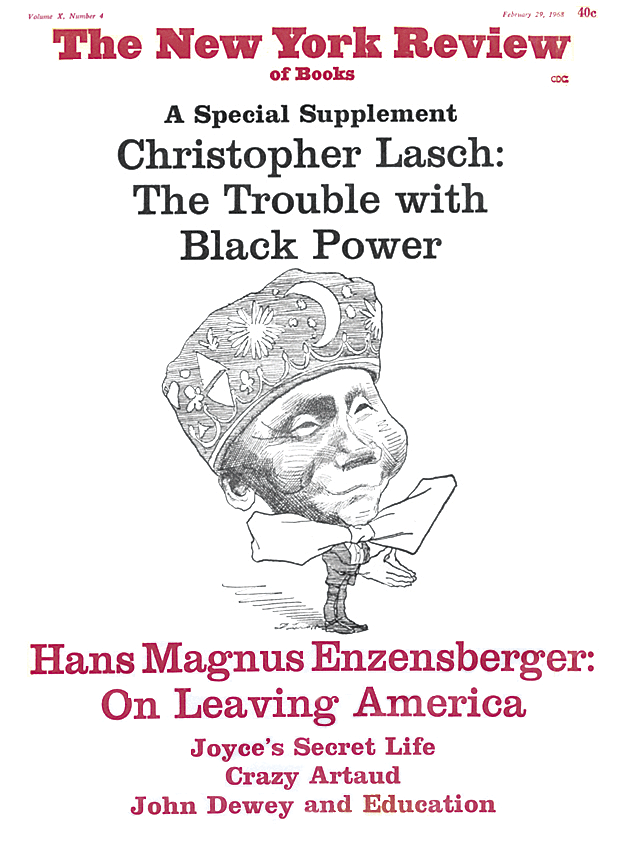