By courtesy of Holbein the bloated Henry VIII of middle age is familiar to us all, tight-mouthed and pig-eyed, so obese that it needed machinery to haul him upstairs. In A Man for All Seasons Robert Shaw gave us the young Henry VIII, a booming, back-slapping locker-room bore, and a bad man to cross.

The film version has solid support in fact. Henry was “noisy, unbuttoned, prodigal,” “a formidable, captivating man who wore regality with splendid conviction”—and a cold, vicious man, whose reign opened with the cynical sacrifice of Empson and Dudley, his father’s most valued servants, and ended with the execution of the Earl of Surrey. The saints, Fisher and More, and the delinquent wives, Anne Boleyn and Catherine Howard, feature in every martyrology of Henry’s reign, but as Professor Elton has pointed out, the fact that these others “were unattractive, and did not fall for religion’s sake, has obscured the fact that they were unusually innocent of the charges preferred.” Even more revolting was his steady annihilation of the Plantagenet line: Henry Pole, Henry Courteney, and Edward Neville in 1538, Lady Margaret Pole, Countess of Salisbury, in 1541, while hired assassins roamed the Continent in the wake of Cardinal Reginald Pole. To many of his subjects he was “a tyrant more cruel than Nero.” “a beast and worse than a beast.”

His willfulness was legendary. His decision to divorce Catherine of Aragon, which brought on the English Reformation, was inspired by dynastic motives of some importance, but most contemporaries simply attributed it to an irresponsible sexual itch—“Junker Heintz will be God, and does whatever he lusts,” was Luther’s comment. But even his most experienced councilors were staggered when a year later he wanted to divorce his new queen, Anne Boleyn. It was typical of him that he celebrated the news of Catherine of Aragon’s death in 1536 by a high mass, followed by a court ball at which he appeared dressed in yellow.

Naturally he has been a cruel embarrassment to all Anglican leaders, from Cranmer to Newman, but to A. F. Pollard, who wrote the last useful biography in 1902, he was a great national leader, “the most remarkable man who ever sat on the English throne.” However, in the clear light of reason his achievement was so stupendous, his character so petty, that his responsibility for that achievement must be called in question. Was it really this lecherous and bedizened Falstaff who “Ruined the great work of Time,/And cast the Kingdom old/Into another mould”? The greatest of modern Tudor historians, Geoffrey Elton, returns a flat and emphatic negative—“He was no statesman, and inasmuch as qualities of statesmanship can be discerned in his reign they must be looked for elsewhere.” In Wolsey, that is or Thomas Cromwell.

TO SCARISBRICK the issue is more complex. He clears the ground by pointing out something which is scarcely disputable but often ignored, that Henry was “the true source of the really important events of his reign—the wars, the divorce, the breach with Rome.” Whether these were wise decisions is another matter; he criticizes Henry’s wars as irresponsible and wasteful, and he brushes aside the dynastic excuse Henry offered for his divorce, and which has usually been accepted. Divorce and remarriage could not produce the needed son before 1533 (actually it was 1537), and it therefore almost certainly doomed England to the succession of a minor, and a regency. It would have been better in every respect to leave the succession to his eldest child, Mary, who was thirty-one when he died, and could so easily have been married off in the meantime to a man agreeable to her father.

Also the divorce was egregiously mishandled, tactically as well as strategically. After an illuminating discussion of contemporary canon law on this matter, Scarisbrick points out that Henry and his advisers took the wrong tack from the beginning, when a different approach might well have brought an easy victory. Having bungled things at Rome, Henry then bungled things in bed, and with Anne Boleyn pregnant, the final stages were taken at a gallop. The result was a breach with Rome which Henry had never bargained for—after all, it was only in 1521 that he had secured the proud title “Defender of the Faith”—and which placed him in a position of extreme danger.

Scarisbrick concludes that Henry’s responsibility for policy was considerable, but far from continuous. He was:

Now glad to release all into his minister’s hands, now irrupting suddenly and decisively into affairs both big and small, now in enthusiastic partnership with his servant, now, equally unpredictably, lapsing into lazy indifference to public business. Now he was hot, now he was cold. Now he was masterful, now docile; now wax, now steel, now honey. He was neither roi fainéant nor working monarch, but each in turn, erratically.

But to a great extent the attempt by historians to apportion responsibility between Henry and his ministers is beside the point; the choice of servants is one of the most crucial tests of executive ability, and good ministers serve good kings. (There are a few exceptions, but Henry was no Louis XIII, and Crom-well no Richelieu.) And in his choice of ministers, remember, Henry displayed unusual discernment. Wolsey in 1512, Cromwell in 1530, were both obscure men likely to continue so; Henry chose them, magnified their status and authority by the gift of honors, offices, and grants, and backed them to the limit. But would anybody else have picked out Thomas Cromwell as likely to be “the most accomplished servant any English monarch has enjoyed”—or Thomas Cranmer as the first and in many ways still the greatest Protestant Archbishop of Canterbury? Sir Thomas More was his choice to succeed Wolsey, an eccentric and heterodox man who had written a book regarded by most contemporaries as wildly subversive of the established order of society.

More was another brilliant choice, but he was hamstrung by the breach with Rome, and from 1529 until the rise of Cromwell in 1533 Henry had to take the decisions alone, and carry them out. Scarisbrick points out that policy in these years is a reflection of the King’s character, “belligerent and outwardly confident, yet nervous and uncertain.” But Henry had every right to be nervous; bloodshed and open revolt were always possible. If they did not come it was probably owing to Henry’s tactics of introducing new measures piecemeal, with long intervals between, and hustling the clergy over one fence after the other without giving them a chance to turn and make a stand. Whether intentional or not, it was a masterly performance.

THE INTELLECTUAL FRAMEWORK of the Reformation is another matter, but Scarisbrick gives Henry equal credit with Cromwell for the revolutionary dogma of the Royal Supremacy, a Headship more Supreme than any of his successors dared attempt. Similarly, the conventional picture of Henry as a true son of Mother Church being carried kicking and screaming into the sixteenth century needs severe amendment. The death of his first two wives in 1536 cleared the way for reunion with Rome, and no doubt the fatted calf would have been killed for the prodigal; but Henry was not interested. He did not will the development of English Protestantism, but he created the conditions of free debate that made it possible, and though he was distressed to find “how unreverently that most precious jewel, the word of God, is disputed, rhymed, sung and jangled in every alehouse and tavern,” it was his own fault if it was. He himself had “a mind on the move.” His theological opinions were distinctly his own, and whether they were orthodox or heterodox was irrelevant in the Supreme Head. They could be both at the same time; for if his anti-clericalism led him to enforce the Roman prohibition of clerical marriage (for fear of establishing ecclesiastical dynasties), it also caused him to strike the adjective out of the term “Holy Orders.” His attempts to amend the Ten Commandments (the first, not the seventh, by the way) and juggle with the Sacraments shocked even Cranmer.

SCARISBRICK’S ANALYSIS of Henry’s theology deserves to be read in full. It is difficult to think of any biographer more in command of his scattered material and his protean subject, and the more complex and mind-wearing the topics with which he deals—Wolsey’s foreign policy, the canon law of divorce, the law and dogma of the Supremacy—the more compelling his approach. If he rejects Pollard’s flawless, commanding omnicompetent ruler, he also rejects Elton’s paper mandarin, the front man for ambitious schemers. The monarch who emerges is a fallible being of enormous intelligence and vigor but uncertain concentration and capacity for work, who had the will to insist on a continuous policy but not the art to maintain it. He was the victim of a well-concealed lack of confidence which is most obvious in his relations with women.

Henry’s kaleidoscopic married life is so notorious that in discussing it we can adopt his own summary technique. He married six times, divorced two wives, executed another two, and saw another die in childbed. Undeterred by successive failure, he always embarked on what he understandably called “the extreme adventure” with renewed passion and expansive braggadocio, but it is significant that “two years of intense marriagemongering” between 1537 and 1539, “in the course of which at least nine women were seriously considered, several more glanced at and five of them were required to sit for portraits to Hans Holbein the Younger,” ended in a disastrous match with Anne of Cleves which was not even consummated. This is not the record of a sexually adroit man, and Scarisbrick comments:

Behind his troubadour gallantry lay not the passion and skill of a seasoned voluptuary, but probably the unstudied, matter-of-fact sexuality of a man whose primary expectation of a woman was that she should bear his children.

He showed little understanding of women, and less regard for them; when the Earl of Surrey wanted to take his wife on campaign, Henry curtly told him that war was “unmeet for women’s imbecilities.”

However, in this as in other spheres, lack of understanding was held not to matter. The most impressive thing about Henry VIII is his aggressive regality; he was every inch a king, and even at his most despicable he still behaved like one. Through his example as well as his policy he gave the Crown a new dignity. His father had been “his Grace,” Henry was “his Majesty.” By 1534 he was “most rightful and dreadful Sovereign Lord,” and in 1536 he was “daily finding and devising the increase, advancement and exaltation of true doctrine and virtue,” and “the total extirpation and destruction of vice and sin.” The true title of the famous Act of Six Articles was “An Act abolishing diversity in Opinions.”

He was arguably the most atrocious tyrant who ever sat on the English throne—John and Richard II are pygmies beside him. Scarisbrick admits that “it is difficult to think of any truly generous or selfless action performed by him.” Yet by the end of his long reign most of his subjects had come to accept him at his own valuation:

Despite everything, he was indisputably revered, indeed, in some strange way, loved. He had raised monarchy to near-idolatry. He had become the quintessence of Englishry and the focus of swelling national pride. Nothing would ever be quite the same after he had gone. 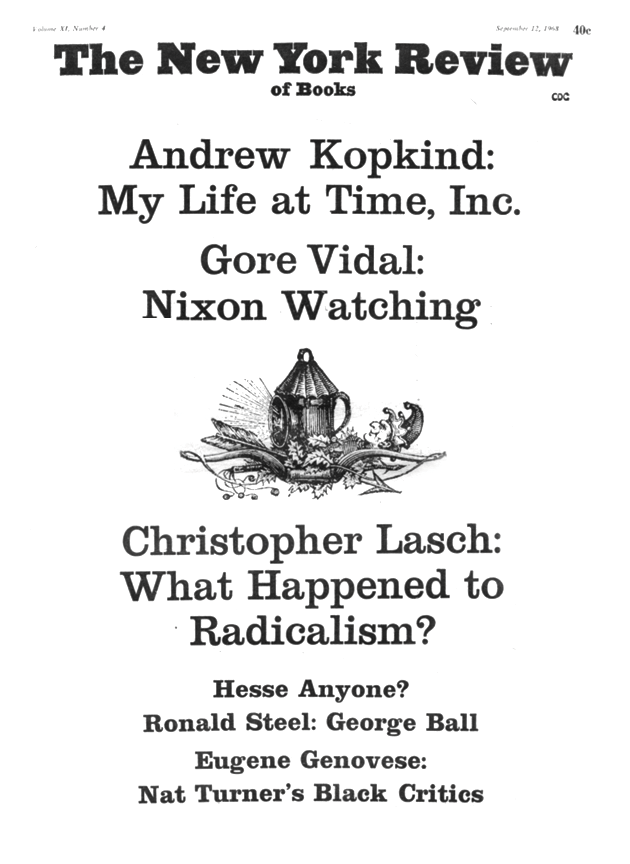