Writing about the theater—is this a possible activity for the independent critic just now? Those who write for the newspapers and the popular magazines do so as a part of a larger enterprise. They have responsibility, so to speaks, for the activity called “theater.” Other critics and writers, living in the eternal, may write of general ideas about dramatic literature without ever going out at night; and they would be no more negligent of their duty than would Professor Leavis by ignoring Jacqueline Susann or—who knows?—Ernest Hemingway. For one, however, who is self-propelled toward comment upon an art from, upon the passing scene, his very activity is fogged with doubt at a time like the present. Without a sufficient measure of positive feelings on cannot write to much purpose about any art from. In the shadow of the negative there must always be the promise of something hoped for, the lament for losses. In the long run, why are we asked to remind the world more than occasionally of the trashy? How can one give, time and again, attention to the trivial? To think of oneself as a constant corrective is a morbidity.

These remarks, alas, are a foreword to some further animadversions. Hope, like any fever, came with the autumn—and that itself is the measure of the addiction, sustained for decades. Perhaps the theater is finished for good this time. Many people think that to be true and the shrinking commercial situation confirms them. However, the diminishment of the commercial theater has to do with efficiency rather than art. Films and television offer entertainments in a more useful packaging, and the films, in addition, are far more interesting. I do not feel that the commercial theater, playing to more or less large audiences, bears any special claim upon our loyalty. The use made of its large budgets is a hindrance to interesting art. I believe Oliver Smith, with his two hideously mounted new productions—Indians and A Patriot for Me—belongs in Las Vegas. But true theater is an ancient and noble calling, both for those who create it and those who watch it. The wonder about it, the meditation on what theater can be in our time, what joy and beauty and knowledge it can bring to our lives—and how to bring it—that, in spite of disillusion and anxiety, occupies the thoughts of those who have still within them a belief in the form. But isn’t all of this just cant? I am not sure. I undertake new assaults with great misgiving.

These misgivings are especially painful in the case of the “New Theater”—and for a number of reasons. Last year I spent many evenings downtown. Disappointment was sharp. Reluctance to think what one actually thought was even greater, for the atmosphere of the new theater is warm and trusting. It is benevolent, evangelical, and yet seems knowledgeable enough about the world not to expect real understanding outside its own orders. Sometimes when your heart had closed you felt as if you’d just closed the door on a Jehovah’s Witness. One’s deepest emotions and beliefs were engaged by the social elements in the enterprise, by its vows of unchaste poverty, by its talk of community and sharing, by the ugly, sweating foolishness.

Experience. With the theater groups this word has taken on special aesthetic properties that are, one supposes, meant to replace the older critical vocabulary and the idea of measurement by standards of the past, of truth, significance, beauty, whatever. What one is asked about a play or an evening is: Did you have a good experience? I myself have had a good experience at two important group performances I thought were bad art and bad theater. The “experience” came from the pleasure of the people I was with and from my own feeling that I must (why?) see these particular productions and lo, there I was, marking it off, seeing it, experiencing it…and well, being quite unmoved, intensely critical at the same time. It is always a good experience to go to the Cafe LaMama, because of the charm and simplicity, the high quality of the productions, achieved by the strictest, most liberating, economy, the outstanding acting in certain of the current modes they especially understand. Everywhere in the downtown theater there is poverty, peace, love, community. Theater works are said to grow, by a sort of organic gardening; the group creates, each member adding his own idea. Plays are “investigations,” or “improvisations,” or “ceremonies.” Thus far, except in works like the Living Theatre’s Frankenstein, this communal art has been, like Communism itself, prone to unexpected corruptions. One must so often say to oneself, suffering, that inane as it sometimes is, the idea should be kept alive for one’s children, for “the promise of the future.”

Glibly, people speak of the “nonverbal theater.” This is a misunderstanding. Words abound in the new theater and this is the source of trouble when inspiration is lacking. Ritual and myth: the use of these words is just a fraud, or perhaps ignorance. You cannot create ritual and myth in a loft. Ritual and myth are created by society, in the time, in history, and through profound imaginations and conceptions brought, by way of some immense creative insight, into the drama of certain great periods. Formlessness is not ritual, young men and women simulating birth pains, as in Schechner’s Dionysus, are not ritual; it is just modern dance. Perhaps one cannot try for “ritual.” There is some contradiction there. (The only American ritual I saw last year was the Broadway production of James Weldon Johnson’s Trumpets of the Lord. But the audience fled from this gospel singing and the improvisational and yet traditional sermons that told the mythic story of man. It seemed an embarrassment to them, reminding them uncomfortably of the ritualistic Christian past.)

The Open Theater’s production of The Serpent bears sharply on all the problems of the serious group theater. This work was some years in the shaping. There is a published text by Jean Claude van Itallie, which he speaks of itself as existing in collaboration with the members of the acting group. From the myth of the Fall of Man the Open Theater has created a soft, sentimental work, sadly trivial and banal. These self-sacrificing, good people, all of them concerned with the slow and loving creation of the work, seem here to lack all culture, history, ideas. The actors throw you an apple, whispering, eat! They make charming little beginning-of-the-world music on funny little instruments, they jump about to show murder, assassination, they stick out their tongues in lust, they writhe in a line like a snake. Still, one thing our time is pre-eminent in is the dance and the achievements of The Open Theater in that art are rather minimal.

The work is called a ceremony and it is loosely based on Genesis. Ah, the sadness of “loosely.” How could they make the decision to forego the great text in favor of one of their own devising? The composition of their own dreadfully commonplace words is a deeply unnecessary vulgarity. At a re-enactment of the Kennedy and King assassinations actors are running about, saying: I was not involved/I am a small person/I hold no opinions/I stay alive…. When the beauty of the Biblical language intrudes, your first thought is relief and the second is that the physical representation of the Biblical text, by the actors, is quite unbearable in its inadequacy. In the begetting scenes, actors straddle each other, ramming front and back: and no matter, it is all appallingly mushy and weak. The theme of “the Serpent,” in history, or in culture, is a vast one, the largest there is: By Man came Death. This ceremony represents it by pathos and teasing, sexiness and bad writing. At the end, they are all singing, along with the rest of the fallen in the audience: “We are sailing along on Moonlight Bay.”

The “new theater” cannot represent tragedy by its methods, or even sadness. It is best suited to farce and satire, thus far at least. For it is not radical theater, but love-culture theater, friendly, trusting, playing about in the nude. Childishness is its prevailing mood. In that way, its roots in the worst of the old commercial theater are still very deep.

With Arthur Kopit’s Indians the new vocabulary works perfectly. This is a really bad “experience.” It is hard to know how to describe the many distresses of the evening. The laughably expensive production, done with a soft of boutique eclecticism, exaggerates, if that is possible, the heartless emptiness of the play, or more accurately, the shooting script. The destruction of the Great Plains Indians, the death of Sitting Bull, the complex history of the slaughter of the buffalo herds, the massacre at Wounded Knee, the vogue for Buffalo Bill’s Wild West Show: out of this eternally reverberating history Kopit has produced exactly nothing. Two ideas are reputed to be on the stage: one, genocide of the Indians; two, a complex American character in the form of Buffalo Bill, the old scout, great hunter, genuine American figure, self-corrupted into show business, and the bearer of our determination to exterminate the true story of the Indians from our national consciousness.

At no point does inspiration strike. The dialogue is full of anachronisms. Characters say, “Right?” with that upward inflection characteristic of New York today. Buntline speaks of people “identifying” with Buffalo Bill. All of the language is dead and more than that, scene after scene is simply boring. The action is confusing, and grossly unworthy of the somehow implied seriousness of the occasion. Like the forest about them, the story of the Indian is rich with the tragic, the symbolic, the unknown. Kopit chooses the US Commission that went to Standing Rock in 1886 as the occasion for a good deal of his exposition. These scenes did not give essential historic fact and they also lacked dramatic power. Americans in period dress refuse to listen, Indians talk Indian talk. Buffalo Bill wanders back and forth between show business and unrevealing encounters back at the reservation.

The greatest fault of the composition, apart from the bad writing, is our inability to imagine Cody as a scout. We can only imagine him in a circus and even there the dummy horses are rather inhibiting. It was, perhaps, the possibility of the theatrical, the Wild West Show, that first made the play take shape; and it is on this that it falls. To bring death and vaudeville together we would need a dramatic talent of the highest order, for this could be a true insight into the American psyche at that point at which it meets the American Indian. But in this play, with its electronic buffalo stampedes, its restlessly shifting, undeveloped episodes you feel all about you the old American attitude toward the killing of the Indians: indifference. 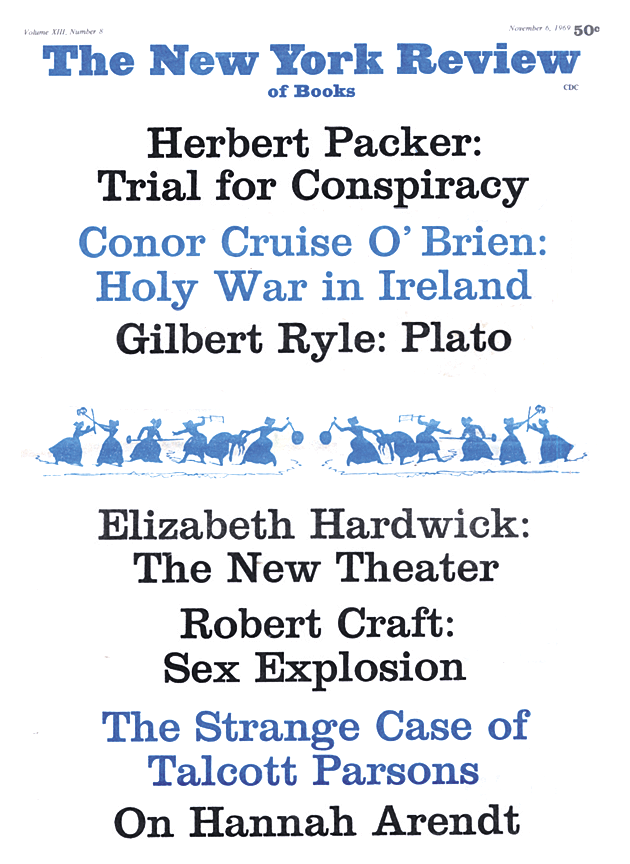 Elizabeth Hardwick (1916–2007) was born in Lexington, Kentucky, and educated at the University of Kentucky and Columbia University. A recipient of a Gold Medal from the American Academy of Arts and Letters, she is the author of three novels, a biography of Herman Melville, and four collections of essays. She was a co-founder and advisory editor of The New York Review of Books and contributed more than one hundred reviews, articles, reflections, and letters to the magazine. NYRB Classics publishes Sleepless Nights, a novel, and Seduction and Betrayal, a study of women in literature.

The Disaster at Lincoln Center