The Mystery of Jean Bodin from the October 14, 1976 issue

I am pleased that The New York Review (October 14) chose to review my book The Colloquium of the Seven About Secrets of the Sublime (Princeton University Press, 1975), a translation with introduction and annotations of Jean Bodin’s Colloquium Heptaplomeres de rerum sublimium arcanis abditis. I am honored that one of the great Renaissance scholars of our time, Frances Yates, wrote the detailed review and indicated the value of the Colloquium as an area of research. I am also very pleased with Professor Yates’s approval of my translation and certain points in my introduction.

Therefore, with great respect for the scholarship of the reviewer and in the best interests of scholarly debate, I challenge several of the assumptions in Professor Yates’s review.

Miss Yates’s deep interest in and thorough knowledge of Renaissance magic has led her to place more emphasis on demons and magic than is warranted by the text of the Colloquium. She constantly refers to Bodin’s Demonomanie and seems to find it necessary to impose the ideas of the Demonomanie upon the Colloquium. Certainly there are lively discussions in the latter work about demons, magic, and the spirit world, but these conversations in the early part of the work lead the discussants to the central problem of events which seem to happen outside the laws of nature. Toralba, the natural philosopher of the dialogue, indicates that these events do not happen from necessity or the necessary power of demons for this would snatch away free will from God. (Colloquium, p. 27.)

The discussion of demons and magic is only a springboard to a lengthy analysis of free will and necessity. At the conclusion of Book II Toralba advises his friends that the origin of demons, their place, and condition seem far removed from positive proofs, but that hidden scientific knowledge had proceeded from the Chaldeans in a certain occult discipline called Cabala. The point here is that the orientation of the Colloquium is not demonic. Rather the conversations about angels and demons provide a locus ex quo for unfolding the major theme of universal harmony, which finds much of its source in the Cabala.

Demons and magic are introduced most often to prove certain points that the speakers want to make; for example Simon Magus and Apollonius Tyana are said to be better magicians than Jesus. This scandalous remark surfaces among the lengthy discussions in Books V and VI concerning Jesus’ Messiahship and what hinders each greatest magician making himself a god, if miracles make gods.

Professor Yates errs in her belief that Bodin, the legalist, the prosecutor of witches in the Demonomanie, is complementary to the upholder of the Law in the Colloquium. While Salomon the Jew does proclaim the Divine Law and its primacy, Toralba argues equally cogently that: “If the law of nature and natural religion which has been implanted in men’s souls is sufficient for attaining salvation, I do not see why the Mosaic rites and ceremonies are necessary.” (Colloquium, p. 186.)

And here is precisely where Professor Yates’s reading of the Colloquium is most in error. She uses the statement of one speaker to prove a point she wants to make. For example, she thinks there is a “great shift from Pico’s position in Bodin’s outlook” because she believes that Salomon does not admire prisci theologi, that Renaissance magic is banned. This is fallacious argument because what one speaker believes, four, five, or even six others may disbelieve. The only belief that all seven share is that there is a God. Miss Yates thinks that I failed to recognize Bodin’s criticism of Pico in the Demonomanie. This is not the case; rather it is a different Bodin speaking in the Colloquium, for in the Colloquium he calls Pico the most learned philosopher of the century. (Colloquium, p. 283.)

One of the most amazing paradoxes of the Colloquium and indeed one of its greatest mysteries (there are many, many more!) is the relationship of Guillaume Postel to the Colloquium. I detailed aspects of Postel’s thought which appear in the Colloquium and are more typical of Postel than Bodin. I agree with Frances Yates that Postel belongs to a different line from Bodin, but in no way does this alter the fact that Bodin used Postel in the work clandestinely circulated under the title Colloquium Heptaplomerers; the internal and external evidence will be revealed in my book on Postel which will be appearing shortly. The manuscript tradition of the Colloquium also supports my thesis.

In speaking of manuscripts I must point out that I do not “claim to have seen a manuscript with the date 1588 on it.” I saw a manuscript, have a complete copy of said manuscript, and noted the manuscript number in my introduction (p. xxxviii). If Miss Yates had wanted to verify my citation, she could have written to M. Piquard, Director of the Bibliothèque Mazarine.

Frances Yates assumes that Roger Chauviré was correct in his negative assessment of Noack’s Latin text (1857). That mistake has been repeated too often. Chauviré was wrong about the date because he did not bother to look at the manuscript. He was wrong in stating that Noack’s text was unreliable. Noack had a poor typesetter, but his edition is based upon the Senckenberg codex, which reflects the readings of BN fonds latin 6564, 6565, 6566, as well as the British Museum manuscript 9002 in the Sloane collection, of which Chauviré was unaware or which he failed to consider. I have collated all the best sixteenth- and seventeenth-century manuscripts of the Colloquium; I recorded in my book the readings of BN 6564 (Memmianus) and Reginensis 1313, and on occasions Mazarine ms. 3529, when I preferred their readings to those of Noack. I have established the stemma of the Colloquium manuscripts, and a lengthy study of the manuscripts will appear in the coming year. My manuscript studies support my method of using Noack’s text, the only complete text of the Colloquium, and of correcting it when necessary by use of BN 6564 and Reg. 1313.

One final point must be made. Miss Yates faults my annotations as “sadly inadequate,” stating that I used standard reference works to elucidate obvious points. I annotated 2,480 references in the Colloquium, eighteen of which are from the scholarly eleventh edition of the Encyclopaedia Britannica and fortytwo from the Catholic Encyclopedia. Where better to locate Priscillians, Noetians, Ubiquitarians, Eutychians, Sabellians, etc.? The other 2,420 annotations are from primary sources for the most part. I am certain that if a team of scholars in various disciplines had pooled their resources the annotations would reflect their expertise. But lo, I am only one woman, and since the Colloquium had been neglected for more than 350 years, it seemed necessary for one to do something about it.

However, in the true spirit of the Colloquium, Professor Yates should be allowed her “demonic” reading, and I shall maintain that universal harmony and toleration are the heart of the matter. I feel certain there will be many other interpretations. The Colloquium is that kind of work. The closing sentences of the Colloquium (p. 471) seem apropos: “Henceforth, they nourished their piety in remarkable harmony and their integrity of life in common pursuits and intimacy. However, afterwards they held no other conversation about religions, although each one defended his own religion with the supreme sanctity of his life.”

I want to thank Professor Kuntz for the courteous tone of her reply to my review of her book and to emphasize to her the more positive aspects of the review rather than the remarks which she has felt to be overly critical. For instance, I say: “In the Heptaplomeres, Bodin gives his secret views on religion, and as Marion Kuntz rightly remarks in her introduction, it connects with all his other works, including the Démonomanie.”

Bodin’s intense belief in demons and fierce persecution of witches is notorious. The awareness of this aspect of his mind is no invention of mine but has been the preoccupation of all Bodin scholars, except those who try to forget it in concentrating on his political thought. Professor Kuntz is not one of the obscurantists, as the above quotation from her introduction shows, but she disagrees, in her letter, with my interpretation of the references to demonology and witchcraft in the Heptaplomeres.

In his article “Jean Bodin’s Demon and his Conversion to Judaism” (Jean Bodin, Proceedings of the International Conference on Bodin, Munich, 1973), Christopher Baxter was, I believe, the first to make the suggestion that the connection between all Bodin’s works may be his insistence on the Mosaic Law, which would also account for his severe disapproval of witchcraft and sorcery. It is a pity that Baxter’s projected translation of the Démonomanie has not been published. A translation of the Universae naturae theatrum, fundamental for Bodin’s science and full of demons, is also much needed. We already have translations of Methodus and République, and now of Heptaplomeres. The addition of Démonomanie and Theatrum to Bodin in English would help, by bringing the works together, to place this strange man in relation to his French Renaissance contemporaries.

One point which mystifies me in Professor Kuntz’s letter is that she says that she does not claim to have seen a manuscript with the date 1588 on it, whereas if we turn to the relevant passage (p. xxxviii of her introduction) we find these words: “a manuscript of the Colloquium which I discovered in the Bibliothèque Mazarine (Bibliothèque Mazarine fonds latin 3527) carries the date 1588.”

However, concerning the Bodin manuscripts and concerning Professor Kuntz’s work on Bodin and Postel, it would be pointless to argue until we have the further information promised in her forthcoming studies, to which I look forward with the greatest interest. In the meantime I assure her that I do indeed appreciate the magnitude of the task which she undertook in producing single-handedly a translation and critical edition of this formidable work. As I remarked at the end of my review, her publication of an English Colloquium Heptaplomeres is bound to attract general attention to the work. 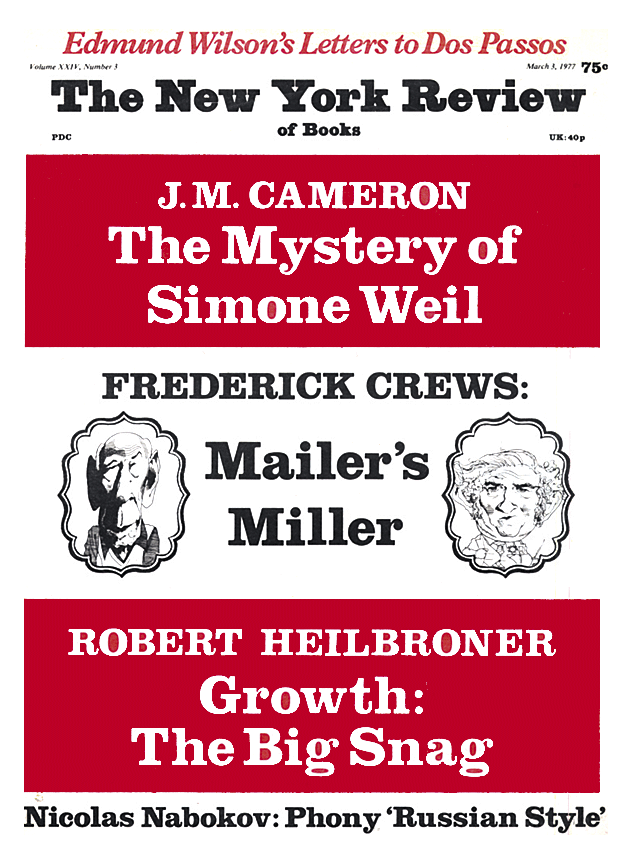 The Mystery of Jean Bodin