RN: The Memoirs of Richard Nixon

The author will surely think it appropriate, perhaps inevitable, that I review this book, for it tells, at around the average level of truth, that I both started Richard Nixon on his public career and helped bring his career to an end.

The beginning was in January of 1942 when he was brought into the Office of Price Administration to work on rubber and tire rationing, tasks then under my direction. (The management of price control and rationing were shortly afterward separated, to the benefit of both.) However, in line with a notable Nixon tradition, I must plead that I didn’t know what was going on. I didn’t meet Mr. Nixon either then or later. He tells here that he had earlier tried for the FBI but was turned down not on grounds of character but because of an appropriations cut. So once, under Hoover, the FBI had its appropriations cut.

My contribution to ending Mr. Nixon’s career was in the mid-Sixties when the Kennedy Library asked me for my papers. On leaving OPA, the State and War departments, and from being an ambassador, I did not think to take my official papers, which I supposed belonged to the government and, in any case, were rather bulky. (I’ve since had to go to the Federal Archives on occasion to look things up.) I did send to the Kennedy Library manuscripts of The Affluent Society, The Great Crash, other folk classics, a mass of personal correspondence, and, by accident, our canceled checks, bank statements, marriage license, my naturalization certificate, and our old income tax returns. Taking a tax deduction on old tax returns would have been a major break-through in sophisticated tax avoidance. However, Dave Powers sent these, the checks, and the other detritus back.

On the manuscripts and correspondence, including that with JFK, his wife, Adlai Stevenson, Harriman, Schlesinger, numerous editors, economists, and literary types, Nathan Marsh Pusey, and various government loyalty boards, they allowed me, as it then seemed, a stunning $4,500. This, Mr. Nixon here says, encouraged him to take a deduction of $576,000 on his more official papers, with endlessly damaging results, made worse because the deduction had ceased to be legal and the gift was backdated without his knowledge. He also blames Lyndon Johnson, George Wallace, Hubert Humphrey, and others for putting him on this downward path.

I tell the foregoing partly for my own pleasure but also because it reflects a central theme of this book. Mr. Nixon never did anything wrong unless someone else had done something like it first. And all evil disappears if it has a precedent.

As committee work goes, this book is not badly written. And, as in the matter just cited, it bears the undoubted imprint, for better or worse, of Mr. Nixon’s personality. This personality is certainly not without interest. He is imaginative and resourceful, and, if one is to believe in democracy, one must find some qualities to explain and justify his twice serving as vice president, twice being elected president. It isn’t as though he weren’t known. I think it was this resourcefulness and imagination that allowed him to see, along with Henry Kissinger, the opportunity that the frozen cold-war diplomacy of his predecessors had given him. Thus the ensuing and important improvement in relations with China and the Soviet Union. This resourcefulness also explains his almost incredible ability (until Watergate) to battle his way out of an endless series of personal and political disasters. The disasters, it is even more interesting to reflect, invariably were invited by his own bad judgment.

This bad judgment arises, one judges, from his inability to think, or anyhow believe, that he could, himself, do anything wrong. That Nixon was a rascal is now generally accepted. But, as his political career revealed and this book superbly affirms, he was and remains a rascal who either considers himself a deeply moral man or, at a minimum, believes that he can so persuade any known audience.

This belief bears heavily on the reader of this book. Were it a candid account of the author’s lifetime of political and personal tergiversation, it would be wonderful reading. But the compulsive search for precedent, the innumerable explanations of the ineffable, and the belief that all his accusers are ill-motivated except when they say something on his side (as even Archibald Cox once did) gets to be a bore.

But not entirely, for one gets caught up in the game—in looking for the flaw in his explanation. Thus, as he sees it, one of the typically egregious misunderstanding to which he was subject concerned that $100,000 that Bebe Rebozo got in 1970 from Howard Hughes. Bebe, “one of the kindest and most generous men I have ever known,” intended to hold it for the 1972 campaign. But then various feuds within the Hughes empire and the danger of exposure and embarrassment caused him to sock it away in a safe deposit box and not even tell Nixon about it for a long while. Later, when the risk of exposure was still acute, it was returned. There couldn’t have been anything funny about the transaction, for an inspection of the bills showed that they had been issued by the Treasury well before the date when Rebozo said he got the money. No switch.

One’s mind dwells, inevitably, on why the payment was in cash money, why 1972 campaign contributions were being collected so early, what would have happened to the bills had there been no danger of exposure. Here is the real interest. Nixon’s explanations almost always invite such thoughts, and they do not greatly tax the mind. I’m persuaded that most of his disasters came from his conviction that if he could persuade himself that something was virtuous or legitimate, he could persuade almost everybody else.

There are other aspects of the Nixon personality which command attention. Sometimes it is less the resourcefulness than the convolution:

I was concerned that Haldeman handle the matter deftly. I did not want him to strong-arm Helms and Walters, nor did I want him to lie and say there was no involvement. I wanted him to set out the situation in such a way that Helms and Walters would take the initiative and go to the FBI on their own. I told Haldeman to say that I believed this thing would open up the whole Bay of Pigs matter—to say that the whole thing was a sort of comedy of errors and that they should call the FBI in and say that for the sake of the country they should go no further into this case.

After this passage one almost feels sorry for Haldeman. Lompoc or wherever must have been a blessed relief. Nixon is not only a master of convoluted thought, but he appreciates it in others. Here is his account of his briefing by Dean Rusk on Vietnam during the 1968 campaign.

Rusk, one of the ablest and most honorable men ever to serve as Secretary of State, made the point that the rest of Asia would be in a “panic” if the United States were to withdraw from Vietnam without an honorable peace settlement. He said that he held this view completely apart from the domino theory, which he considered simplistic. He believed that American withdrawal from Vietnam would leave the Chinese Communists as the only major power on the Asian mainland, thus creating the panic.

The ability to distinguish between the simplistic domino theory and the sophisticated panic theory is the kind of thing Mr. Nixon cherishes. He also responds well to a really complex metaphor. He remembers and quotes Bryce Harlow as telling him on April 23, 1973, that “if Haldeman, Dean, and Ehrlichman have undertaken actions which will not float in the public domain, they must leave quickly—they are like a big barnacle on the ship of state, and there is too much at stake to hang on for personal reasons.”

Perhaps for reasons of professional pecuniary interest, I’m against those who would boycott this work. Quite a few people will find the reading and associated unraveling if not a pleasure at least a challenge. I’m also against a too violent reaction to Mr. Nixon’s belief, here affirmed, that the misuse of FBI, IRS, and other federal agencies is one of the accepted rights of incumbency. He tells with sorrow that Patrick Gray and the FBI were out of control in their pursuit of wrongdoing, that the IRS was not adequately motivated in the investigation he ordered of Larry O’Brien and the McGovern supporters during the 1972 campaign. The orders were wrong, but the book is a testament to the number who would not go along with wrongdoing.

Indeed, next only to the self-justification and the convolution, the book comes across as a bill of complaint against civil servants, members of Congress, Kennedy-types, newspapers, television people, who were out to sabotage his intentions. These were bad, but Nixon was far from effecting them. As one reflects, there never was a time when more Americans were expressing themselves more stridently and diversely with so little fear as in the Nixon years. I’m firm in the belief, a minority view of long standing, that anyone who spoke out under Richard Nixon had little to fear, anyone who was shut up by Richard Nixon had nothing to say. 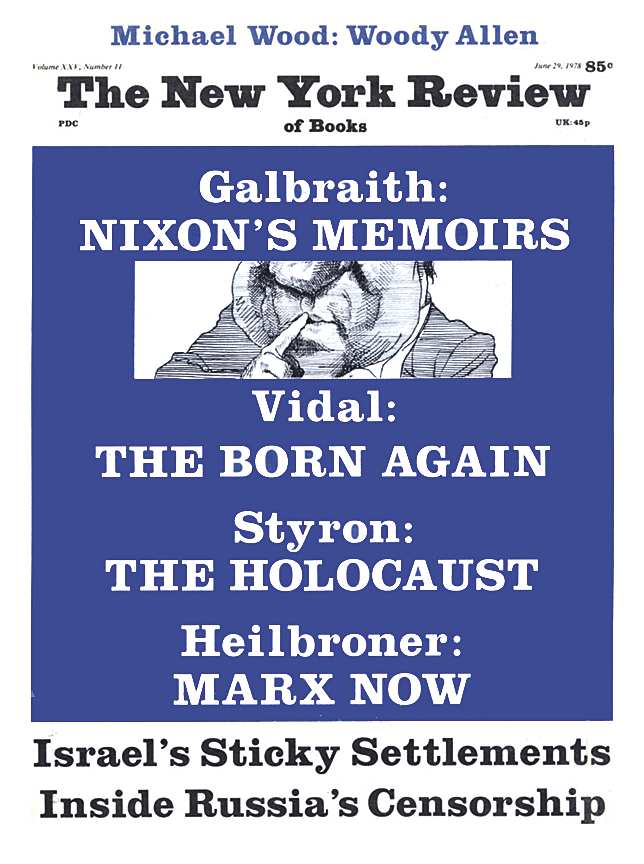 John Kenneth Galbraith (1908–2006) was a Canadian economist and politician. He taught at Princeton and Harvard. His works include The Affluent Society, The Age of Uncertainty and Economics and the Public Purpose. Galbraith’s many honors include the Presidential Medal of Freedom, the Lomonosov Gold Medal, the Order of Canada, and the Padma Vibhushan, India’s second highest civilian award.

Lost in the Cosmic