Like so many blind people my grandfather was a passionate sightseer; not to mention a compulsive guide. One of my first memories is of driving with him to a slum in southeast Washington. “All this,” he said, pointing at the dilapidated red brick buildings, “was once our land.” Since I saw only shabby buildings and could not imagine the land beneath, I was not impressed.

Years later I saw a map of how the District of Columbia had looked before the District’s invention. Georgetown was a small community on the Potomac. The rest was farmland, owned by nineteen families. I seem to remember that the Gore land was next to that of the Notleys—a name that remains with me since my great-grandfather was called Thomas Notley Gore. Most of these families were what we continue to call—mistakenly—Scots-Irish. Actually, the Gores were Anglo-Irish from Donegal. They arrived in North America at the end of the seventeenth century and they tended to intermarry with other Anglo-Irish families—particularly in Virginia.

George Washington not only presided over the war of separation from Great Britain (revolution is much too strong a word for that confused and confusing operation) but he also invented the federal republic whose original constitution reflected his powerful will to create the sort of government which would see to it that the rights of property will be forever revered. He was then congenial if not party to the deal that moved the capital of the new republic from the city of Philadelphia to the wilderness not far from his own Virginia estate.

When a grateful nation saw fit to call the capital-to-be Washington City, the great man made no strenuous demur. Had he not already established his modesty and republican virtue by refusing the crown of the new Atlantic nation on the ground that to replace George III with George I did not sound entirely right? Also, and perhaps more to the point, Washington had no children. There would be no Prince of Virginia, ready to ascend the rustic throne at Washington City when the founder of the dynasty was translated to a higher sphere.

Although Washington himself did not have to sell or give up any of his own land, he did buy a couple of lots as speculation. Then he died a year before the city was occupied by its first president-in-residence, John Adams. The families that had been dispossessed to make way for the capital city did not do too badly. The Gores who remained sold lots, built houses and hotels; and became rich. The Gores who went away—my grandfather’s branch—moved to the far West, in those days, Mississippi. It was not until my grandfather was elected to the Senate in 1907 that he was able to come home again—never to leave until his death in 1949. He lived most of his life in Rock Creek Park, then as now a beautiful wild piece of countryside at the city’s heart, with a rapid shallow stream or creek (pronounced “crick”) running through it. The house he built of local stone is now an embassy, unbeautifully added-to. Otherwise, the country within the city is just as it was half a century ago.

Although foreign diplomats enjoy maintaining that Washington is—or was—a hardship post, the British minister in 1809, one Frances James Jackson, had the good sense to observe, “I have procured two very good saddle horses, and Elizabeth and I have been riding in all directions around the place whenever the weather has been cool enough. The country has a beautifully picturesque appearance, and I have nowhere seen finer scenery than is composed by the Potomac and the woods and hills about it; yet it has a wild and desolated air from being so scantily and rudely cultivated, and from the want of population…. So you see we are not fallen into a wilderness—so far from it that I am surprised no one should before have mentioned the great beauty of the neighborhood. The natives trouble themselves but little about it; their thoughts are chiefly of tobacco, flour, shingles, and the news of the day.” Plus ça change.

Twenty years ago, that well-known wit and man about town, John F.Kennedy, said, “Washington perfectly combines southern efficiency with northern charm.” I think that this was certainly true of the era when he and his knights of the Round Table were establishing Camelot amongst the local chiggers. By then too many glass buildings were going up. Too many old houses were being torn down or allowed to crumble. Too many slums were metastasizing around Capitol Hill. Also, the prewar decision to make an imperial Roman—literally, Roman—capital our of what had been originally a pleasant Frenchified southern city was, in retrospect, a mistake.

I can remember that when such Roman palaces as the Commerce Department were being built, we used to wonder, rather innocently, how these huge buildings could ever be filled up with people. But a city is an organism like any other and an organism seems to know just what it has been encoded to be. Long before the American empire was a reality, the city was turning itself into New Rome. While the basilicas and porticoes were going up, one often had the sense that one was living not in a city that was being built but in a set of ruins. It is curious that even in those prenuclear days many of us could imagine the city devastated. Was this perhaps some memory of the War of 1812 when the British burned Capitol and White House? Or of the Civil War when Southern troops invaded the city, coming down Seventh Street Road?

“At least they will make wonderful ruins,” said my grandfather, turning his blind eyes on the Archives Building; he was never a man to spend public money on anything if he could help it. But those Piranesi blocks of marble eventually became real buildings that soon filled up with real bureaucrats and by the end of the Second World War, Washington had a real world empire to go with all those (to my eyes, at least) bogus-Roman sets.

Empires are dangerous possessions, as Pericles was among the first to point out. Since I recall pre-imperial Washington, I am a bit of an old Republican in the Ciceronian mode, given to decrying the corruption of the simpler, saner city of my youth. In the Twenties and Thirties, Washington was a small town where everyone knew everyone else. When school was out in June, boys took off their shoes and did not put them on again—at least outside the house—until September. The summer heat was—and is—Egyptian. In June, before Congress adjourned, I used to be sent with car and driver to pick up my grandfather at the Capitol and bring him home. In those casual days, there were few guards at the Capitol—and, again, everyone knew everyone else. I would wander onto the floor of the Senate. Sit on my grandfather’s desk if he wasn’t ready to go, experiment with the snuff that was ritually allotted each senator; then I would lead him off the floor. On one occasion, I came down the aisle of the Senate wearing nothing but a bathing suit. This caused a good deal of amusement, to the blind man’s bewilderment. Finally, the vice-president, Mr. Garner—teeth like tiny black pearls and a breath that was all whiskey—came down from the chair and said, “Senator, this boy is nekkid.” Afterward I always wore a shirt on the Senate floor—but never shoes.

I date the end of the old republic and the birth of the empire to the invention, in the late Thirties, of air conditioning. Before air conditioning, Washington was deserted from mid-June to September. The president—always Franklin Roosevelt—headed up the Hudson and all of Congress went home. The gentry withdrew to the northern resorts. Middle income people flocked to Rehobeth Beach, Delaware—or Virginia Beach, which was slightly more racy. But after air conditioning and the Second World War arrived, more or less at the same time, Congress sits and sits while the presidents—or at least their staffs—never stop making mischief at the While House or in the splendid old State and War Departments building, now totally absorbed by the minions of President Augustus. The Pentagon—a building everyone hated when it was being built—still gives us no great cause to love either its crude appearance or its function, so like that of a wasp’s nest aswarm.

Now our Roman buildings are beginning to darken with time and pigeon droppings while the brutal glass towers of the late twentieth century tend to mask and dwarf them. But here and there in the city one still comes across shaded streets and houses,* little changed from the last century, relics of that lost time—when men wore white straw hats and suits in summer while huge hats decorated the ladies (hats always got larger just before a war) and one dined at Harvey’s Restaurant where the slow-turning ceiling fans and tessellated floors made the hottest summer day seem cool even though the air of the street outside was ovenlike and smelled of jasmine and hot tar, while nearby Lafayette Park was a lush tropical jungle where one could see that Civil War hero, Mr. Justice Oliver Wendell Holmes, stroll, his white mustaches unfurled like fierce battle pennants. At the park’s edge our entirely own and perfectly unique Henry Adams held court for decades in a house opposite to that Executive Mansion where grandfather and great-grandfather had reigned over a capital that was little more than a village down whose muddy main street ran a creek that was known to some even then as—what else?—the Tiber. 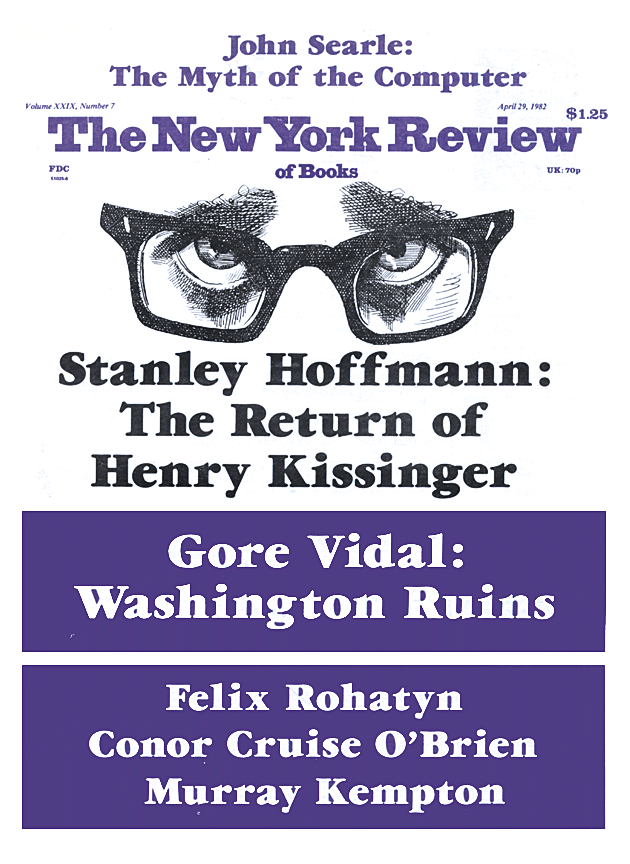 The Ashes of Hollywood

You Can Look It Up

The Ashes of Hollywood

You Can Look It Up

Gore Vidal (1925–2012) was an American novelist, essayist, and playwright. His many works include the memoirs Point to Point Navigation and Palimpsest, the novels The City and the Pillar, Myra Breckinridge, and Lincoln, and the collection United States: Essays 1952–1992.