Page Stegner’s review of Peter Matthiesen’s In The Spirit of Crazy Horse [NYR. April 14] is a collage of errors of omission and commission. Stegner tells the tragic story of the humiliation and killing of Raymond Yellow Thunder, a 51 year old Sioux, by white bigots in Gordon, Nebraska, in February, 1972. But he does not tell the follow-up story of the brutal and senseless Indian retaliation for the killing against Clive Gildersleeve. Gildersleeve, a white man nearing 80, was married to an Indian woman. The couple lived in Wounded Knee, just over the Nebraska border in South Dakota on the Pine Ridge Sioux Reservation. Gildersleeve had lived more than fifty years among the Sioux. They called him brother. He spoke their language and he joined in their ceremonies. And for years he collected beautiful and valuable Sioux artifacts—beaded saddles, medicine bundles, hide paintings, bows, arrows, quivers, pipes, beadwork—and tended them in a log cabin he called the Crazy Horse museum.

Shortly after the killing of Yellow Thunder and in some sort of sick, symbolic gesture, an estimated one hundred to two hundred Indians led by members of the American Indian Movement (AIM), swarmed into Wounded Knee and wrecked Clive Gildersleeve’s museum. They knocked the old man down and spat on him. They smashed and overturned glass display cases and slashed hide paintings and pictures. Then they left, these self-proclaimed AIM “warriors,” taking with them whatever artifacts they had not destroyed. Altogether they stole, destroyed or damaged $50,000 worth of irreplaceable Sioux treasures. Many of these items were later sold to white collectors. “The reason for that destruction,” AIM “leader” Clyde Bellecourt said, “was that the owner, even though he was married to an Oglala Sioux, was white.”

Of the Wounded Knee occupation in 1973, Stegner writes: “The occupiers held Wounded Knee for three months while negotiations with the Justice and Interior Departments went on—then having won a number of promises and feeling they had at least captured the nation’s attention, a settlement was made. But—the government began to violate its agreements almost before the last ‘hostile’ was removed from town.”

The government made no substantive promises because the Indians wanted the country back. And the “occupiers” did not hold Wounded Knee. They paraded openly about under what was at worst the equivocal safety of the federal guns. The Indians knew they could count on the guilty indecisiveness and ambivalence of the federal government. The occupation was a Wild West show, a repetitious exercise in culture play. For as soon as the federal officers were positioned, as soon as the TV cameras were set up, the Indians, in tragicomic fashion, set about reinforcing all the stereotypes whites hold near and dear: they daubed on warpaint, beat tomtoms, sweated in a “sacred purification lodge,” smoked the peace pipes and shouted Hoka Hey, the Sioux warcry. Rather than the threatening warriors, they reverted to self-caricature, to the Hollywood Indians, to the National Park poseur. “From the start,” Time reported, “the confrontation…had all the elements of bad theatre.” Said the San Francisco Chronicle, “It…had the effect of having been scriptwritten.” And Wounded Knee was held 71 days, not three months. 71 days was quite enough. The AIM people destroyed the homes of Indian residents. They stole valuables and burnt furniture. They shot pets, dogs and cats, and smashed children’s tricycles. They defecated and urinated on floors—after having “purified” themselves in “sweat” rituals. Sanitation does not obtain in the Indian movement. But Stegner writes only that “the Sioux people…invited AIM to the Pine Ridge Reservation to help them with their struggle.”

As one example of Matthiessen’s thesis that violent acts against Indians begot Indian militancy, Stegner cites the killing of Richard Oakes. “In September 1972 Richard Oakes, the Mohawk leader of the Alcatraz occupation was murdered by a white man in Santa Clara, California.” Oakes was shot to death near the coastal hamlet of Annapolis, more than 200 miles north of Santa Clara. His killer was Michael Morgan, a YMCA camp manager. Morgan was charged with manslaughter, not murder. Six months later a Santa Rosa (Calif.) Superior court jury found Morgan not guilty. The shooting of Oakes, however tragic, was an isolated incident and was in no way related to violence on the Sioux Reservation.

Referring to the killing of FBI agents Jack Coler and Ronald Williams on the Sioux Reservation, Stegner wrote: “The psychological climate in which the FBI agents were killed is clearly not the result of Indian paranoia. They had good reason to be frightened of armed lawmen.” But the “psychological climate” was far less important than the symbolic “climate.” The date was June 26, the 99th anniversary of the Custer fight. And the point blank execution of the agents as they lay wounded and helpless sings of the killing of the wounded on Custer battlefield, even of the scoring of coups. Given the century-long preoccupation of the Sioux with Custer (“Custer Had It Coming,” Custer Died for Your Sins) and the cultural adherence to symbolism (the occupation of Wounded Knee), it is more than probable the agents were casualties of a planned reenactment of the Custer fight. The bold ambush and deliberate murder of the agents does not reflect panic or “fear of armed lawmen.” And AIM has, ever since the birthday of the “Sovereign Oglala Sioux Nation” during the Wounded Knee occupation, considered itself to be at war with the US, and with the FBI regarded as the attenuated and symbolic extension of Custer’s 7th Cavalry.

Among his litany of egregious white sins against the Indians, Stegner cites a lack of respect—the “least respected ethnic minority.” But William Least Heat Moon, an Osage Indian and author of Blue Highways wrote: “Because many Americans’ respect and sympathy for Indians tends to be nostalgic and romantic rather than informed, the very attitude that should help intercultural relations hinders them.” (emphasis mine)

Least Heat Moon could be talking about Stegner’s review.

Mr. Burrows’s announcement of my “collage of errors of omission and commission” scarcely deserves a reply since his cavils seem largely designed to allow him to air his reactionary opinions about the American Indian Movement under the guise of correcting my “errors.” He complains that I did not “tell the follow-up story” of Clive Gildersleeve after my allusion to the murder of Raymond Yellow Thunder. So what? Neither did Peter Matthiessen, whose book I was reviewing, and whose name Mr. Burrows hasn’t bothered to spell correctly. In fact, I omitted a great number of possible “follow-up” stories that didn’t have any relevance to what I was talking about at the moment. What is Mr. Burrows’s point? That the humiliation and death of Yellow Thunder was not a tragedy because some angry Indians committed a senseless act of retaliation? That the second act negated the first? That Indians aren’t really filled with fear and loathing when they are brutalized by whites because they can behave just as stupidly? Mr. Burrows doesn’t make any point, actually—he just seems to be insisting on equal time.

His attempt to instruct me in the history of the Wounded Knee conflict is a mistake. “The government made no substantive promises,” he says, during the negotiations that ended the occupation of the town. On the contrary, they made a number. To take but a single instance, they agreed, during talks that took place on May 1 and May 2, that if Indians with federal warrants outstanding against them would surrender, neither bond nor terms of release would be imposed. Of fifteen who were ultimately arrested, some were released, others were held and bail set as high as $150,000. That alone seems to qualify under my remark “the government began to violate its agreements.” Mr. Burrows, incidentally, changes my language, “agreements,” into his “substantive promises” (as if there is some difference) because he apparently feels only the latter are binding.

“The ‘occupiers’ did not hold Wounded Knee,” says Mr. Burrows, either denying that the whole situation ever took place, or making some kind of odd distinction between hold and occupy. It hardly matters. His real purpose here is to chastise the “occupiers” (his word now) for their behavior, which he finds disgusting. What this has to do with my review of Peter Matthiessen’s book escapes me.

I’ll take Mr. Burrows’s word for it that Richard Oakes was shot 200 miles north of Santa Clara. It is not a major issue. The reason for mentioning Richard Oakes at all was to make the point Burrows goes on to underscore (inadvertently)—i.e., that Oakes’s killer was charged with manslaughter, not murder, and was never convicted. Whether Oakes’s death was an isolated incident unrelated to the kinds of Indian/white conflicts that led to Wounded Knee is a matter of opinion. A good many people whose views on the matter carry more authority than Mr. Burrows’s do not agree. One might as well argue that the killing of a Black Panther in Oakland had no effect on the Chicago branch of that organization, or that Chicanos in California never heard of Tijerina in New Mexico.

Whether, as Mr. Burrows argues, the “psychological climate” that existed when Agents Coler and Williams were killed at Pine Ridge is less important than the “symbolic climate” is again a statement of opinion, not fact, and to say that it is “more than probable the agents were casualties of a planned reenactment of the Custer fight” is pure speculation. If Burrows has any evidence for this thesis, other than that it amuses him to think so, he doesn’t offer it.

Finally, the invocation of William Trogdon (William Least Heat Moon) to suggest that my attitude toward Indians is romantic rather than informed is ridiculous. In the first place, Heat Moon is not “an Osage Indian,” he is half Indian by birth and not much of an Indian at all by temperament. I happen to admire Blue Highways, but it is least interesting in the few places its author encounters Indians, and while Least Heat Moon alludes to Black Elk on occasion his spiritual mentors are more demonstrably Walt Whitman and Alexis de Tocqueville. His comment about America’s romantic and nostalgic attitude toward Indians is probably borrowed from the Laguna Pueblo writer, Leslie Marmon Silko, who said almost exactly the same thing, but who went on to observe that this sympathy is not transferred to government policy dealing with Indians. From the tone of Mr. Burrows’s letter he evidently thinks it is—or that it should not be to those whose behavior doesn’t correspond to his notion of respectability. There is absolutely nothing romantic or nostalgic about the US Department of Justice’s attitude toward rebellious Indians (if, indeed, toward any Indian). And that, not the ways in which Indians have abused their image by peeing on some white man’s floor, was the subject of Peter Matthiessen’s book. 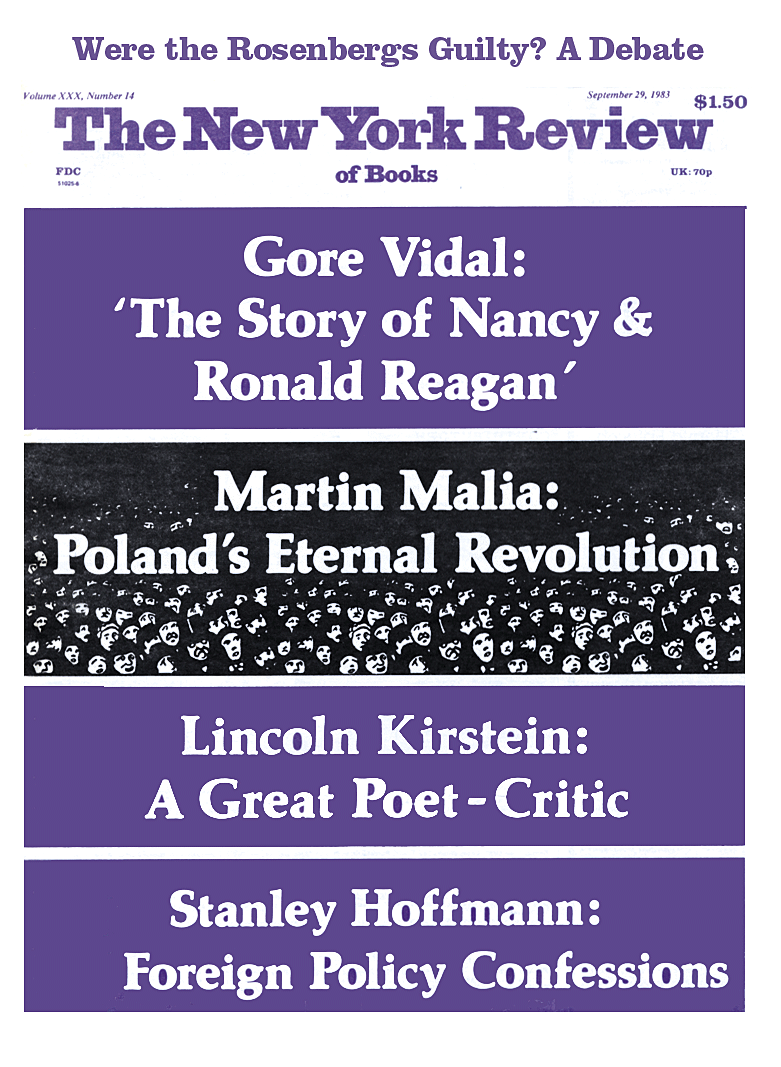 Bringing on the Indians

American Indians and ‘The Other Slavery’

The discoverer of the New World soon became its first transatlantic human trafficker.

The Intent Was Genocide

The Indians’ Own Story