Salman Rushdie wrote the following in January after a public burning of copies of The Satanic Verses took place in Bradford, West Yorkshire, which has a Muslim population of 50,000. The burning was carried out by a group of Muslims led by the city’s senior imam, or religious leader. The book was also burned in Oldham, in Greater Manchester. Large demonstrations by Muslims against the book have since taken place in London. In New York the offices of Viking Penguin, the publisher of Satanic Verses, have received seven bomb threats from people who object to the book.

Muhammad ibn Abdallah, one of the great geniuses of world history, a successful businessman, victorious general, and sophisticated statesman as well as prophet, insisted throughout his life on his simple humanity. There are no contemporary portraits of him because he feared that, if any were made, people would worship the portraits. He was only the messenger; it was the message that should be revered.

As to the revelation itself, it caused Muhammad considerable anguish. Sometimes he heard voices; sometimes he saw visions; sometimes, he said, the words were found in his inmost heart, and at such times their production caused him acute physical pain. When the revelations began he feared for his sanity and only after reassurances from his wife and friends did he accept that he was the recipient of the divine gift of the Word.

The religion which Muhammad established differs from Christianity in several important respects: the Prophet is not granted divine status, but the text is. It’s worth pointing out, too, that Islam requires neither a collective act of worship nor an intercessionary caste of priests. The faithful communicate directly with their God.

Nowadays, however, a powerful tribe of clerics has taken over Islam. These are the contemporary Thought Police. They have turned Muhammad into a perfect being, his life into a perfect life, his revelation into the unambiguous, clear event it originally was not. Powerful taboos have been erected. One may not discuss Muhammad as if he were human, with human virtues and weaknesses. One may not discuss the growth of Islam as a historical phenomenon, as an ideology born out of its time. These are the taboos against which The Satanic Verses has transgressed (these and one other; I also tried to write about the place of women in Islamic society, and in the Koran). It is for this breach of taboo that the novel is being anathematized, fulminated against, and set alight.

Dr. Aadam Aziz, the patriarch in my novel Midnight’s Children, loses his faith and is left with “a hole inside him, a vacancy in a vital inner chamber.” I, too, possess the same God-shaped hole. Unable to accept the unarguable absolutes of religion, I have tried to fill up the hole with literature. The art of the novel is a thing I cherish as dearly as the book-burners of Bradford value their brand of militant Islam. Literature is where I go to explore the highest and lowest places in human society and in the human spirit, where I hope to find not absolute truth but the truth of the tale, of the imagination, and of the heart. So the battle over The Satanic Verses is a clash of faiths, in a way. Or, more precisely, it’s a clash of languages. As my fictional character “Salman” says of my fictional prophet “Mahound,” “It’s his Word against mine.”

In this War of the Word, the guardians of religious truth have been telling their followers a number of lies. I am accused, for example, of calling Muhammad the devil. This is because I use the name Mahound which, long ago, was indeed used as a derogatory term. But my novel tries in all sorts of ways to reoccupy negative images, to repossess pejorative language, and on page 93 explains: “To turn insults into strengths, whigs, tories, Blacks all chose to wear with pride the names they were given in scorn; likewise, our mountain-climbing, prophet-motivated solitary is to be…Mahound.”

Even the novel’s title has been termed blasphemous; but the phrase is not mine. It comes from al-Tabari, one of the canonic Islamic sources. Tabari writes: “When the Messenger of God saw his people draw away from him…he would gladly have seen those things that bore too harshly on them softened a little.”

Muhammad then received verses which accepted the three favorite Meccan goddesses as intercessionary agents. Meccans were delighted. Later, the Archangel Gabriel told Muhammad that these had been “Satanic verses,” falsely inspired by the Devil in disguise and they were removed from the Koran. Gabriel consoled Muhammad, however; earlier prophets had experienced similar difficulties for similar reasons, he said. To my mind, Muhammad’s overcoming of temptation does him no dishonor; quite the reverse. The Archangel Gabriel felt the same way, but the novel’s opponents are less tolerant than archangels.

The zealots also attack me by false analogy, comparing my book to pornography and demanding a ban on both. Many Islamic spokesmen have compared my work to anti-Semitism. But intellectual dissent is neither pornographic nor racist. I have tried to give a secular, humanist vision of the birth of a great world religion. For this, apparently, I should be tried under the Race Relations Act, or if not that perhaps the Public Order Act. Any old act will do. The justification is that I have “given offense.” But the giving of offense cannot be a basis for censorship, or freedom of expression would perish instantly. And many of us who were revolted by the Bradford flames will feel that the offense done to our principles is at least as great as any offense caused to those who burned my book.

The Muslim world is full of censors these days, and many of its greatest writers have been forced into silence, exile, or submission. (The Joycean option of cunning seems unavailable at present.) To find Labour councilors in Bradford, and Labour MPs in Westminster, joining forces with the mullahs is hugely depressing. When the Labour MPs Brian Sedgemore, Max Madden, and Bernie Grant, and Councilor Mohammed Ajeeb, the former mayor of Bradford, start asking for censorship to be extended and for the blasphemy laws to be expanded rather than abolished, then it’s time for the Labour leadership to respond by disowning such initiatives in the clearest possible terms. The Conservative education minister Kenneth Baker, writing in the London Times, has already deplored the threats and burnings, and dismissed the desirability of using the blasphemy law. The silence of the leader of the Labour party, Neil Kinnock, is beginning to look distinctly odd. Apart from anything else, doesn’t he mind that elected representatives of the Labour party were present at the Bradford auto-da-fé?

The Satanic Verses is not, in my view, an antireligious novel. It is, however, an attempt to write about migration, its stresses and transformations, from the point of view of migrants from the Indian subcontinent to Britain. This is, for me, the saddest irony of all; that after working for five years to give voice and fictional flesh to the immigrant culture of which I am myself a member, I should see my book burned, largely unread, by the people it’s about, people who might find some pleasure and much recognition in its pages. I tried to write against stereotypes; the zealot protests serve to confirm, in the Western mind, all the worst stereotypes; of the Muslim world.

How fragile civilization is; how easily, how merrily a book burns! Inside my novel, its characters seek to become fully human by facing up to the great facts of love, death, and (with or without God) the life of the soul. Outside it, the forces of inhumanity are on the march. “Battle lines are being drawn up in India today,” one of my characters remarks. “Secular versus religious, the light versus the dark. Better you choose which side you are on.” Now that the battle has spread to Britain, I can only hope it will not be lost by default. It is time for us to choose. 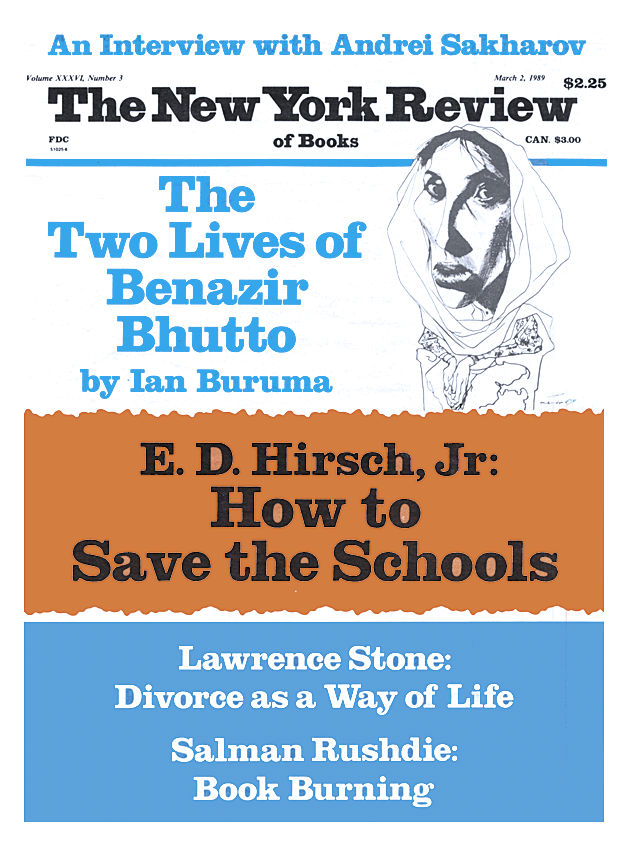