French politics often seem to be an extension of French culture by other means. Jack Lang, the minister of culture, was the only prominent socialist to do well in the last elections, and the plans for a new national library, the Bibliothèque de France, have continued to cause intense controversy in Paris.1 A critical report on the new library, by a distinguished, officially appointed group, was finally made public in March, two months after the text had been submitted to the government. It called attention to serious structural problems in the current plan, particularly the original proposal to store books in the four high glass towers that stand at each corner of the building, which is to be constructed on a site overlooking the Seine, to the east of the Gare d’Austerlitz.

It is unfortunate that the publication of this report was held up so long, since changes in the project become more difficult to make with each day that passes. Moreover, Laure Adler, who supervises the project for President Mitterrand’s office at the Elysée, refused in January to discuss the report publicly and dismissed as “informations partielles tout à fait étranges” (biased and completely weird reports), what we now know to be the very accurate account of the committee’s critical views that had been leaked to the press (Le Monde, January 23).

Mitterrand probably would not have allowed this report to be commissioned if he had not been confronted by a petition circulated by Georges Le Rider, a former head of the Bibliothèque Nationale, and signed by seven hundred intellectuals from many countries. In this open letter sent on August 20, 1991, to the president, Le Rider endorsed several aspects of the project, especially its computerized catalog, but he sharply criticized the nonfunctional design of the proposed building as “spectacularly bad.” In Dominique Perrault’s plan, two thirds of the books were to be stored in four soaring glass towers, while reading rooms would be underground, surrounding a sunken courtyard planted with trees. Like Philip Leighton of Stanford, an internationally respected expert on library design, Le Rider was scathing about the inanity of storing precious books under glass.

Responses to Le Rider’s petition—many from readers of this journal—were unexpectedly numerous. Emboldened by this surge of public concern, Jacques Chirac, the mayor of Paris, during the first week of October personally asked Mitterrand to revise the project. Chirac ordered that the work on the site, which belongs to the city, be stopped. On October 9, 1991, at 5:45 pm he explained to the press that Mitterrand had agreed to consider the matter; but at 6:45 pm Jack Lang majestically announced that the project would go on as before. The site was taken over by the state.

But seven hundred signatures from throughout the world cannot just be ignored, and on October 11, Emile Biasini, the Secrétaire d’Etat aux Grands Travaux, asked the body that officially oversees French libraries—the Conseil Supérieur des Bibliothéques—to appoint a committee to defuse “a situation of conflict that was in large part artificial.” The committee’s mandate was at once broad and drastically curtailed, since in Biasini’s words, it would not question the “architectural choice made and confirmed by the president of the Republic.” One wonders what the group would have recommended if its members had had a truly free hand.

The conseil named a five-man commission (or groupe de travail), which met from November 15 to January 17, consulted more than a hundred experts, and inspected the new British Library. Its twenty-nine-page report on the library makes thirteen major recommendations and puts particular emphasis on the need to integrate the old National Library with the new Bibliothèque de France and to install electronic systems and catalogs that would provide the basis for a truly national system of state, university, and municipal libraries.

Although barred from challenging the architectural project itself, the commission members point nonetheless to what they called its “worrisome” features, and they specifically recommend modifying the “geometry” of the plan. Four proposals explicitly deal with Perrault’s building. The two most important call for additional underground engineering in order to allow the gradual transformation of the inner garden into a storage space for books, and a higher ratio of usable surface to volume, “to minimize or eliminate the storage of printed documents in the towers.” They also call for improved ventilation to safeguard the air intake and less reliance on fragile high-tech systems for delivering books and controlling the internal climate. The committee’s direct criticism of the use of towers for storing books—on grounds of their physical risks, costs, and the fragmenting of the work force they would cause—confirms the scientific claims put forward in Le Rider’s petition. Notwithstanding the restrictions on the committee, the report clearly endorses the campaign to improve the library’s physical plan.

Mitterrand’s response was typical: he began by congratulating himself because “the report does not bring into question the choice of Dominique Perrault,” even though he had explicitly excluded from its consideration the decision to choose Perrault when the committee was first set up. He endorsed the proposal to improve ventilation, and agreed to shift 20 percent more of the books from the towers to the underground level, a tacit admission that the glass towers present insuperable problems. For budgetary reasons, the height of Perrault’s structure was shortened by 10 percent. An order was given that the garden be redesigned by Jacques Wirtz, a Belgian specialist in topiary art—undoubtedly an improvement over Perrault’s plan for a sunken space darkened by a simulated forest of Fontainbleau.

All of the commission’s other recommendations about the design of the building were ignored by Mitterrand and his cultural bureaucrats. The headline of the International Herald Tribune’s report was accurate: “Mitterrand Brushes Off Library Criticism.”

Since then, other developments have underscored the incoherence of Perrault’s design. When the commission began its investigations, the books were to have been protected by wooden shutters set inside the glass towers, a system said to be a technological tour de force. (On French tv Pierre Nora, the editor of Le Débat, and I were castigated by Dominique Jamet, the president of the library project, and his friends for questioning this.) The latest plan for the towers provides a five-layered envelope: two outer layers of glass, a wooden sheath, rock-wool insulation, and a concrete shell. As a result, the usable surface area has been reduced to about 50 percent of the entire space available, as I predicted a year ago.2 It is estimated that on sunny summer days the temperature between the two glass layers might reach 60 degrees centigrade. (Water boils at 100.) Climate controls in the stacks will be difficult to maintain, since parts of the space allotted for transporting the books will not be air conditioned.

The quick-fix solutions now being devised to make up for a poor and hastily chosen design invariably complicate the difficulties they are supposed to resolve. The original idea had been to store rare books in the towers while the most frequently consulted books would be near the reading rooms below. But now that the towers have been found to be inadequate for fragile books, the arrangements for storage may have to be inverted. The more a book is read, it seems, the further away it will be from the reader. All of Perrault’s Rube Goldberg devices, of course, increase a budget that is already overstrained. Today’s fiscal irresponsibility may reduce the amounts available for acquiring books and publications in the future.

What is to be done? The simplest suggestion is that Mitterrand should accept the commission’s thirteen recommendations. This is now difficult to do, since the building’s foundations have already been poured. But all the books should be moved out of the towers and the project’s fragmented design should be made more coherent. The garden should be reduced in size, and the glass towers turned over to administrative uses. Regrettably, because of Perrault’s refusal to alter his design, it may now be necessary to keep all of the library’s rare books (including two million books published before 1875) at the old Bibliothéque Nationale on the rue de Richelieu.

Another possibility is that the entire project for a new library will be sabotaged after the French legislative elections scheduled for March 1993. This is a disquieting prospect in many ways. Some conservative politicians such as Jacques Chirac (who wants the towers to be shorter in order to preserve the Paris landscape) have endorsed the aims of the project, although not its form. But others, more philistine, are cooler to this necessary but very expensive library. Mitterrand’s obstinacy, it is clear, now threatens the entire program. 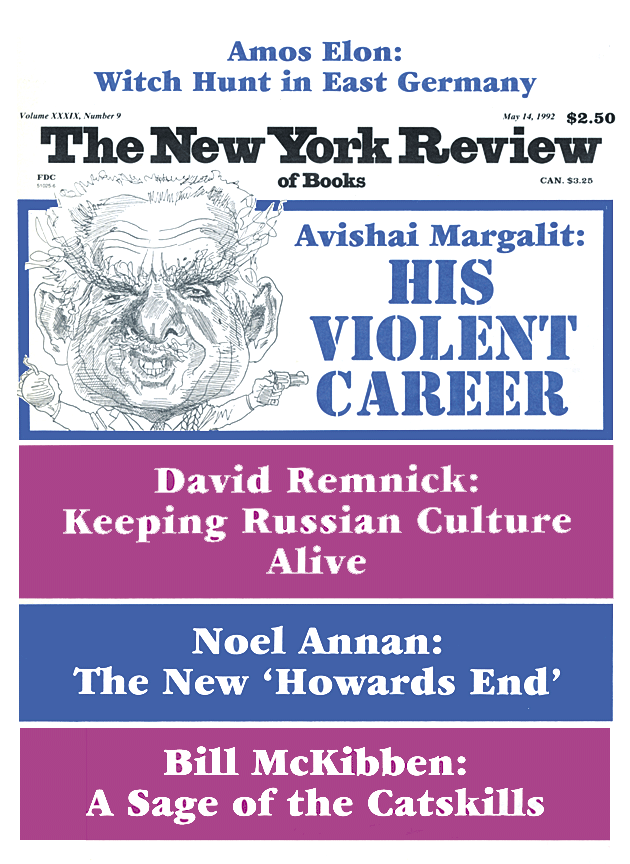 Patrice Higonnet teaches French history at Harvard. His latest book is Goodness Beyond Virtue: Jacobins During the French Revolution. (July 2001)