It seemed like a simple day’s work last March: to travel down from London to Exeter University for the paper I work for, the Independent, spend a pleasant day at this small town in the English west country, and interview a former major general from the KGB about his evil past. My journalistic friends in Moscow confirmed to me that Oleg Kalugin was the person he claimed to be: a major general who had, among other things, studied journalism at Columbia and served for several years at the Soviet embassy in Washington. Returning to the Soviet Union, he had rapidly become disillusioned with the corruption and inefficiency of the system and had become a prominent liberal opponent of Gorbachev’s.

He was appearing with a former press aide to Gorbachev in a debate at the Exeter Student Union as part of the annual Russian week run by the exceptionally energetic and imaginative Russian Studies department. They were to debate the previous summer’s coup; but the real interest in his visit was simply the chance to talk to someone who had worked for the KGB. Like most other journalists, I had assumed that virtually all intelligent and personable Soviet diplomats were in fact KGB men, and the more suave and diplomatic an official Soviet representative was the more likely he was to be from the KGB and not the Foreign Service. But appearances have to be maintained, and Kalugin was the first Russian I’d met who was completely open about his former employment.

He turned out to be a man of considerable force of character and no obvious regrets. His work abroad had been perfectly honorable, he said: it was only when he returned home that he found the system wholly corrupt. Then he had rebelled. But all countries needed a secret police and an intelligence organization. These must be under democratic control, but even the British had problems with that, he said, in a nicely edged allusion to the Spycatcher case. I talked to him for about half an hour in his hotel room; and then for a further twenty minutes in the company of Richard Norton Taylor, a Guardian journalist who had also come from London for the debate.

Following the lecture I borrowed a room from the Student Union and sat down at my laptop to produce a five-hundred-word news story. After I had sent over the main story, I rang the news desk in London. They wanted more on spying and less on Russian domestic troubles. So while talking on the telephone and reading straight from my notes taken during the day, I added one of Kalugin’s anecdotes about the difficulty of getting interesting people to talk to the KGB. There had been a journalist in Washington, he said, who had broken off all ties with officials at the Soviet Embassy in 1956. He, Kalugin, had persuaded the man to talk to them again in the 1960s, but after the invasion of Czechoslovakia, they had one last lunch, for which the journalist had not even let him pay the bill.

Kalugin did not name the journalist involved, and, as he told the story and as I understood it, there was no suggestion that the journalist was a paid agent, just that he was a useful contact: someone with whom conversation was possibly enjoyable and certainly of mutual benefit. When Kalugin said the man was an agent, I took him to mean that he was useful to talk to, and no more than that. Perhaps I should have made this clearer, but the point seemed trivial—I wasn’t giving evidence before the House Un-American Activities Committee.

Except that, in effect, I was. Three sentences from the published story, phoned at the last minute from my notes, have been the sole quoted evidence from a named source in the attempt to smear I.F. Stone as a paid KGB agent. The sentences are as follows: “We had an agent—a well-known American journalist—with a good reputation, who severed his ties with us after 1956. I myself convinced him to resume them. But in 1968, after the invasion of Czechoslovakia…he said he would never again take any money from us.” (Ellipsis in the original.)

My story appeared in the Independent on March 12. The quote from Kalugin was repeated word for word in an article by the former HUAC employee Herbert Romerstein in the conservative magazine Human Events on June 6.

Romerstein, however, added an interpretation of the quote which turned it into a direct attack on I.F. Stone. He also gave a mistaken attribution of the source of Kalugin’s statement, which may seem trivial but allows us to trace all subsequent versions of the attack on Stone to him. When he reproduced my quote from Exeter verbatim, he attributed it to “a speech in London.” He also introduced a second high-ranking former KGB officer into the story, whom he refused to identify; and it was this man—let’s call him Romerstein’s spook, since he has no better name—who claimed that Kalugin had been referring to I.F. Stone. Kalugin himself, when we talked at Exeter, declined to identify the journalist in question: “KGB officers, even retired ones, don’t like to identify their agents,” Romerstein wrote.

But anonymous KGB agents apparently like to do so. In Romerstein’s words:

My KGB source in Moscow was much more frank. He said that Stone would not even allow Kalugin to buy him lunch during their last meeting. He insisted he wanted nothing from the Russians. However, according to the source, Stone had taken a considerable amount of KGB money for more than two decades.

The anonymous statement that Stone took money from the KGB for more than two decades is the central accusation in the campaign against his memory. It has been explicitly denied on the record by Oleg Kalugin. The only source is Romerstein’s spook—and what a remarkable figure he is. He somehow knows what I left out of my Exeter story in the ellipsis indicated by three dots: that Kalugin told me that the Washington journalist had refused to let him pay for lunch. And he tells Romerstein, without adding any other evidence to the story in the Independent, that the journalist in question was Stone, and that Stone had been a paid KGB agent for two decades. Then he vanishes from history, leaving only a smear behind him.

Romerstein’s story was checked by D.D. Guttenplan, Stone’s biographer, who described in the Nation of August 3 a telephone call he made to Kalugin in Moscow on June 12. Kalugin then explicitly denied that he had recruited Stone or paid him any money. Guttenplan also spoke to Romerstein, who refused to discuss whether Kalugin himself had confirmed to him what the anonymous “former high-ranking KGB officer” had told him.

Meanwhile, Accuracy in Media (AIM), a right-wing pressure group, republished Romerstein’s claim. The version in their newsletter adds nothing of substance to the original accusation against Stone. Since it repeats the false statement that Kalugin had made his quoted remarks during a speech in London, we learn from it that Accuracy did not stoop to mere factchecking. However, another anonymous spook told AIM that five other prominent Washington journalists had been KGB “agents of influence.”

The next version of the accusation cropped up in the New York Post of July 10, in which the columnist Ray Kerrison denounced Stone as “a hired Soviet shill.” In his version, Stone was on the KGB’s payroll for fifteen years. He gives no reason for thus revising Romerstein’s original estimate of “more than two decades.” But he did quote word for word from the “speech in London,” and this attribution marks every version of the story originating with Romerstein and his spook.

The New York Times defended Stone in an editorial; the New York Post responded with a defense of its columnist. The Washington Post defended Stone and the five other journalists named by AIM. All this was lively, but added nothing to the substance of the gloss put by Romerstein’s spook on the quote that Kalugin first gave me.

An editor of The New York Review of Books was the first journalist to try to track down the original story in the Independent. He rang me and asked what Kalugin had actually said. I couldn’t find the note I had made. So I spoke to Kalugin on September 3 and asked him what he had meant. He confirmed that Stone had been the subject of his original anecdote. He then said; on the record and without hesitation or equivocation, that he had not paid Stone any money. He had just paid for lunches. He had also, he said, bought lunches for numerous other Washington journalists without anyone supposing that they were KGB agents. The accusation that Stone had been an agent was, he said, “just a malicious misinterpretation. Why they drew conclusions of that sort, I don’t understand.” Kalugin then said: “Never did I mention Stone as a man who was paid as a Soviet agent. I had no facts to back that accusation up.”

“And a man in your position would have known if he was a Soviet agent?” I asked.

“Absolutely right,” replied Kalugin. “He refused to be paid for the lunch. That’s all.”

I rang Herbert Romerstein and read him Kalugin’s quotes. “You could not persuade me that I.F. Stone was not a KGB agent,” he said. He said a great deal else, but that was the central statement he made; and when Romerstein says he cannot be persuaded, I am utterly convinced he is telling the truth.

“I’m telling you that I don’t believe he denied it [that Stone was a KGB agent]…” Romerstein said. “If in fact he has said this, there are others who will contradict that statement.” These “others” appear to be more former KGB officers who would prefer to remain anonymous.

I asked why he believed such people now after a lifetime spent professionally disbelieving them. “I disbelieved them when they said what I knew to be false,” he replied. “I believe those things that either can be confirmed or cannot be proved to be lies.” 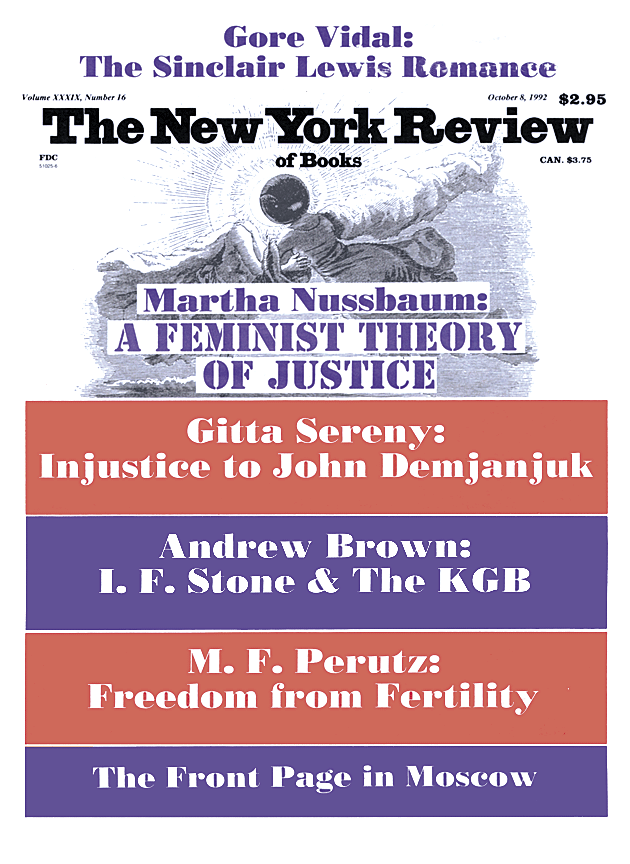