The following is an open letter from PEN, concerning the trial on December 13, 1995, of Wei Jingsheng, which resulted in his being sentenced to fourteen years in prison. It is addressed to:

“Dissent may not always be pleasant to listen to, and it is inevitable that it will sometimes be misguided. But it is everyone’s sovereign right. Indeed, when government is seen as defective or unreasonable, criticizing it is an unshirkable duty.”
—Wei Jingsheng

We, the undersigned, are writers of the developed world who are privileged to live and work under circumstances that allow us to express our opinions freely. We come together now in hopes of focusing your attention on the urgent plight of our Chinese colleague Wei Jingsheng.

On November 21, 1995, Wei, who disappeared from sight after being arrested by Chinese secret police agents in April 1994, was formally charged by the leadership of the Chinese Communist Party with “conducting activities in an attempt to overthrow the government.” This is a grave criminal offense, which guarantees, at the least, a long incarceration and harsh treatment—in this case, for a man who is in the forefront of the battle for human rights in his country.

As a young man, Wei Jingsheng first protested publicly against repression during the so-called Beijing Spring of 1978-1979, when only the bravest spirits dared speak out after the Orwellian silence and darkness in which China had been wrapped for years. All China’s “springs” have failed Wei since then, but he has never failed his country, repeatedly protesting and being repeatedly and inhumanely punished for it. Now at the age of forty-five, he has served nearly sixteen years in prison for stating his opinions.

In 1993, pressure from the United States and other Western nations helped obtain Wei Jingsheng’s release from prison. He immediately recommenced his campaign for democracy, was soon detained again, and, if convicted at his December 13 trial, faces potentially life-threatening punishment.

Recently, a former Chinese Communist Party official living abroad remarked that the Chinese government’s policy toward dissidents would be tested in the wake of President Jiang Zemin’s “summit meeting” with President Clinton.

“When Jiang came back from the summit with Clinton,” said the former official, “instead of releasing Wei the government charged him…. This proves the hard-liners still have the upper hand.”

We believe that the hard-liners will continue to have the upper hand so long as they convince their colleagues in government that economic opportunities for Western business will take precedence over Western concern for democratic freedoms and basic rights. As Wei wrote in The New York Times after his release in 1993, they are asking:

Is it really likely that Americans would abandon an opportunity to make money just to protect the human rights of those they have befriended?

Is it really likely that the American people’s determinations of right and wrong could ever influence the judgment of the US government?

It looks as if the Communist Party has answered these questions in the negative. So even though it may have realized that its own conduct might have been in error, it still firmly pursues a strategy of brinkmanship, giving ground only when absolutely necessary and always in the last five minutes….

The Chinese people’s understanding of the new direction of US policy toward China leads them to believe that the party was right all these years in saying that the American government is controlled by rich capitalists. All you have to do is offer them a chance to make money and anything goes. Their consciences never stopped them from making money.

Wei’s words about the United States might apply to any of our countries in their relations with China. We cannot know whether Wei Jingsheng, in the cell where he is at present confined, is aware of what happened in Port Harcourt, Nigeria, on November 10. That day, the repressive military government of Nigeria, secure in its belief that oil and profits matter more to the West than human rights, hanged the writer Ken Saro-Wiwa and eight of his codefendants on charges universally regarded as false, committing a brutal act of judicial murder. It is easy to imagine that Nigeria’s indifference to belated pleas and threats was not lost on Wei Jingsheng’s jailers.

We, writers living in freedom, request with the greatest urgency that you not allow a repetition of the Port Harcourt murders to occur in China. We ask that you act to justify Wei Jingsheng’s faith in our shared principles. We fervently request that every available influence be brought to bear to secure his release and that of other patriots and prisoners of conscience in China. The day will surely arrive when a generation of leadership comes to understand the necessity for tolerance as an emblem of participation in a civilized world community. Until that day, if our hopes for such a community are to mean anything, we must help and support those who work toward it. This test of our countries’ concern in the matter of human rights is being observed by the whole world. We must not be found wanting, thereby giving satisfaction to the enemies of freedom everywhere. 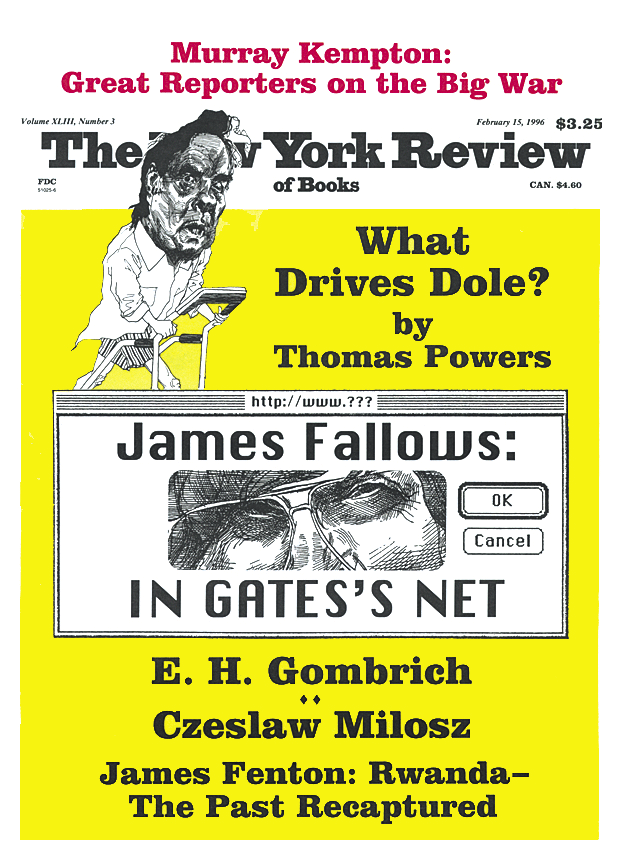 Some Advice for the New Government

The Popularity of Chinese Patriotism

Will the Chinese Be Supreme?

Competition, friction, and testing between the United States and China are unavoidable, probably for decades.