Perseverance to the Point of Madness from the July 17, 1997 issue

Near the start of his essay on Charlie Chaplin [NYR, July 17], which pays a certain amount of attention to my new biography of the great comedian, Michael Wood flatly declares that Chaplin’s father was a music-hall performer. How can he be so sure? In my book I speak of my fruitless efforts to locate a birth certificate for Chaplin in English files, and I further relate that in the 1920s he confessed to Eddie Sutherland, the assistant director of The Gold Rush, that the question of his father’s identity remained unresolved. “Charlie Chaplin was born of a man named Chaplin, possibly,” Sutherland later told the Columbia University Oral History Project. “Apparently the mother had strayed from the path with several men—at least she had romances with quite a number of men—and Chaplin told me, ‘I don’t know, actually, who my father was. There’s some doubt about it.”‘

Turning to the question of the social condition of Chaplin’s South London childhood, Wood accuses me of placing such a strong emphasis on the the pleasantness of the Methley Street rooming house where young Charlie and his mother, Hannah Hill Chaplin, resided for a time that I leave no room for the possibility that their life there was shadowed by financial difficulty. “You can worry about where the next meal is coming from in the most pleasant of rooms,” Wood writes, “and you can be very poor some of the time even if you have a windfall now and again.” But the truth is that I stress the precariousness of Hannah’s situation in all of her perches, including the one in Methley Street. “If the frequency of her changes of residence was any indication, the lovers who enabled Hannah to rent decent lodgings quickly became disillusioned with her erratic behavior and dropped out of sight, leaving her at the mercy of that awesome figure of late-Victorian urban culture, the landlady…. In the quiet and modestly attractive backwater of Methley Street…she may have soon run into trouble about the rent.” Perhaps this was the reason, I go on to suggest, that she agreed to allow Charlie, at the tender age of nine, to join a music-hall troupe.

A willingness to ignore critically important facts becomes strikingly evident, in sum, in the early paragraphs of Wood’s essay, and continues to mark it as he moves on to other matters. His discussion of the political implications of Monsieur Verdoux (1947) is particularly louche.

Chaplin’s politics in his films, we are told, “scarcely seem like politics at all; more like a wishful, sometimes fuzzy, sometimes sharply focused appeal to an old-fashioned ethic of kindness, which is the reverse of ruthlessness.” Thus Verdoux, in his speech at his trial, declares he was “forced to go into business for myself,” and insists that in comparison with the contemporary “world,” which is “building weapons of mass destruction for the sole purpose of mass killing,” he is only “an amateur.” The reference to America’s atom bombs is “purely topical,” Wood asserts, in a dismissive phrase that wipes away a lot of history. For in 1947, a world-wide, Kremlin-inspired peace offensive against atomic America was in full cry. Monsieur Verdoux represented Chaplin’s first contribution to this campaign, but it was not his last, as evidenced by the public statement he made in 1949 in support of the Paris meeting of the Communist-front World Congress for Peace, his endorsement of the Mexico City meeting that following September of the Communist-front American Continental Congress on World Peace, and his acceptance in 1954 of the World Peace Prize of the Communist-sponsored World Peace Council.

In the wake of his erasure of the atom-bomb aspect of Monsieur Verdoux’s message, Wood attempts to remove the Red coloration from Chaplin’s equation of business enterprise with Verdoux’s money-accumulating history of wife murder. “You don’t have to be a Communist to think such thoughts,” Wood protests, and as proof of this he points to John Gay’s Beggar’s Opera, which argued—so he claims—that murder for profit is just another form of capitalism “some hundred years before Marx was born.” (Actually, ninety.) That I, to the contrary, regard Chaplin’s equation as an expression of his surging anti-Americanism strikes Wood as a deplorable throwback to cold war thinking. But Monsieur Verdoux was a product of the cold war, and no account of its creation can be deemed to be complete that does not reckon with Chaplin’s close friendship in the 1940s with the German Communist composer Hans Eisler.

For a period beginning in 1935, this brilliant, witty, utterly ruthless man (whose own sister believed he was capable of murder) served as the head of the Comintern-connected International Music Bureau in Moscow, the purpose of which was to foster allegiance to the Soviet Union among musicians all over the world. Because the Kremlin was impressed by his aptitude for cultural infiltration, he was eventually sent to Hollywood, where he became the driving force, once Hitler invaded the USSR, behind Artists’ Front to Win the War, which drew Chaplin, Rockwell Kent, Paul Robeson, Larry Adler, Muriel Draper, and various members of the future Hollywood Ten into its fold. Following his deportation from the US in 1948 on perjury charges—a proceeding thatChaplin fiercely fought every step of the way—Eisler proclaimed that during his residence in the United States he had got to know capitalism in its “most naked, most savage, and most brutal form.” Nevertheless, he had accomplished many things of significance in this country that he despised, and one of them was that with the assistance of Bertolt Brecht, whom he and his wife had been careful to entertain with Chaplin, he had “radicalized” the comedian. In addition, he had done his best to show Chaplin that his destiny lay in making his humor more consistently radical. For although Chaplin had told him many jokes, Eisler had mainly laughed at those that had “a strong political thrust.” The success of his manipulativeness may be observed in Monsieur Verdoux.

I am grateful to Mr. Lynn for his correction of my imprecision about Charles Chaplin Sr., and I should have been clearer about what I thought Mr. Lynn was doing with Chaplin Jr.’s early life. Mr. Lynn does indicate how socially and financially uncertain that life was, but then manages to make it sound a little too easy in spite of that uncertainty—he writes, quoting Charles Booth, of “working class comfort.” If Mr. Lynn didn’t mean anything by remarking on the pleasantness of the rooms at Methley Street, why did he remark on it?
For the rest, I wasn’t attempting to remove the red coloration from Monsieur Verdoux, I was suggesting that there are other colors there too, and that there are many ways of arriving at the color Mr. Lynn so avidly and exclusively sees as red. Is he seriously suggesting that in 1947 only Communists and Communist stooges failed to love the American atom bomb? And if Monsieur Verdoux represents the best Hans Eisler could do by way of radicalizing Chaplin, we shall have to think again about the sinister powers of this “utterly ruthless man.” 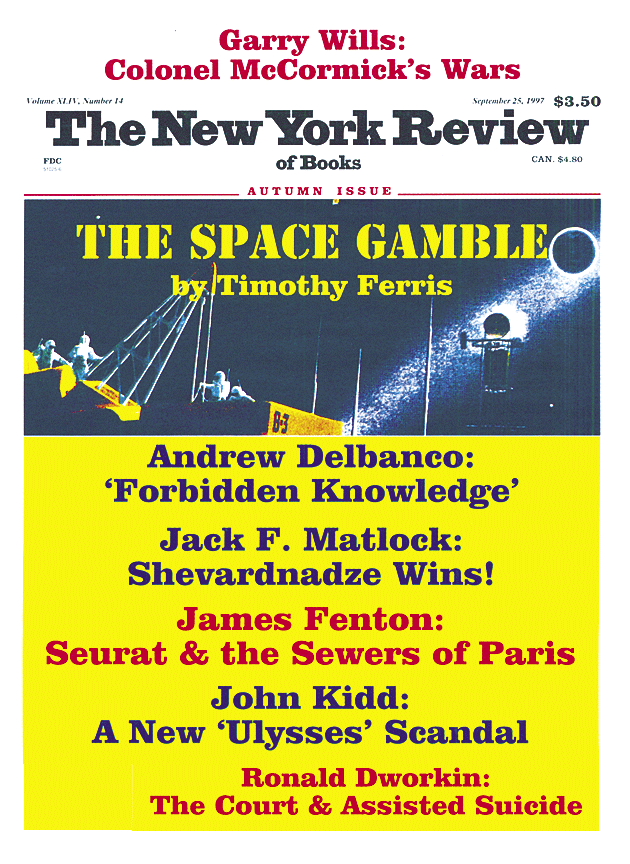 The Prime of James Wood

The Case of the Colorblind Painter

Perseverance to the Point of Madness