Until recently it has been, not a secret, but a fact kept carefully closeted, that the countries that consider themselves the most advanced and civilized had for many years been sterilizing “undesirable” people, or taking their children away from them, in order to improve the “race.” This was going on in the United States until 1973.

The matter gained renewed public attention in August when the Swedish press revealed that between 1935 and 1976 more than 60,000 people in Sweden were sterilized against their will, or in ignorance of what was being done to them. These were mentally or physically handicapped people, or those congenitally ill, or socially “undesirable” women who had “too many” children and were considered to be living “bad lives.” Among them, at least in the earlier years of the program, were Gypsies, vagabonds, and people who were not “of pure Swedish race” (as that race was supposed to look, according to a series of engraved plates produced at the Institute of Racial Biology in Uppsala in 1922).

However, Sweden should not be singled out. The same thing was going on in other Nordic countries, as well as in Switzerland, France, Britain, Japan, the United States, and elsewhere. In the United States, the American Eugenics Society, founded in 1921, called for sterilization of 10 percent of the American population in order to prevent “the suicide of the white race.” In 1927, in rejecting a suit against the state of Virginia on behalf of a white woman of eighteen who had been forcibly sterilized in a Virginia asylum, the Supreme Court ruled that rather than eventually having to execute criminals born of the mentally defective, or see their children die of want, it was better for the state to prevent their birth.

Forcible sterilizations were banned by the US Department of Health, Education and Welfare only in 1973, following Senate hearings chaired by Senator Ted Kennedy, which revealed that in 1972 alone some sixteen thousand men and eight thousand women had been sterilized under existing federal programs.

There have been two rationales for such policies. One claims to protect the well-being of the sterilized person and his or her offspring. Sterilization is requested by the person’s family or by doctors or institutional authorities who find that the person is incapable of responsible choice with respect to bearing children, or would be incapable of caring for offspring. In Britain, France, and most other countries, these interventions have been made under some system of ethical and legal oversight, at least in principle. In France this September a weekly magazine caused a stir with an article estimating that some fifteen thousand mentally handicapped people had been sterilized in recent years. Senior ministers promised an inquiry and asked the inspector general of social services to ascertain whether new measures were needed to protect people’s rights in such matters.

The other rationale is the theory for improving mankind proposed by a cousin of Charles Darwin, Francis Galton (1822-1911), and based on Darwin’s observations of natural selection in the plant and animal kingdoms. The theory of eugenics held that factors under social control could improve or impair future generations of humanity. In its early and radical versions eugenic theory held that human beings should be “bred” in order to eliminate the unfit or “degenerate,” and to promote the propagation of the allegedly superior.

Eugenics first became a popular social cause in Britain after the Boer War, stimulated by the fear that Britain’s troubles were the result of “degeneration” of the British “race.” Later it seemed to offer a response to manpower losses in World War I. From that period until the 1950s, some British children’s charities sent large numbers of poor or illegitimate children confided to them—some orphans, some the children of people who could not afford to support them—to institutions in Australia, where a number of them ended in more or less the condition of indentured servants, totally cut off from their origins.

All of this was based on clear assumptions about which “races” are superior and which inferior. Bitterly remembered in Australia is a comment made by Winston Churchill in 1942, when he diverted Australian troops to doomed Singapore, in place of British divisions, revealed in official documents released under the fifty-year rule. He said the Australians could be sacrificed because they were “bad blood.”

The United States at the same time was drafting black citizens mainly to serve in segregated Army labor and transport battalions. Blacks weren’t allowed in the Navy or Marines. The Navy Department believed they didn’t have what it takes for combat, and that white Americans would not share quarters with them on ships.

That is the way people thought, including some who might seem the least likely to have done so. A scandal recently erupted in Israel concerning the treatment of Yemeni Jews in the late 1940s, when the Israeli state had barely been established. It was revealed that hundreds of children of immigrant Yemeni Jews were literally stolen from their Arabic-speaking parents for adoption by families of European Jewish origin, in an attempt to meld the Yemenis into what then was the European mainstream. The blood of Ethiopian Jews was for a time segregated in Israel’s blood banks. The entire relationship between Jews and Arabs, from the time of Mandate Palestine to the present day, has been influenced on both sides by racist stereotypes.

One must judge all this in historical perspective. The Darwinian analogy with plant and animal kingdoms seemed convincing. Programs to “improve” the race seemed progressive, which is why Social Democratic leaders in Scandinavia were particularly attracted to them, as well as “progressive” thinkers elsewhere. They were ideas congenial to a generation of intellectuals in the United States and Europe given to larger theories of social engineering and social planning. Eugenic programs resulted from the “best” scientific opinion of the time, the “best” medical opinion, and many were ordered and carried out in the democracies with the best of intentions. If some individuals suffered, that simply was the price of progress.

Nazism carried eugenics to a demented climax, not only in the death camps themselves but in the eugenically inspired murders of insane, handicapped, or congenitally ill individuals begun in Germany in 1939, and in the experiments on living humans conducted by Nazi doctors during the war. Church protests against the early euthanasia program in Germany caused it to be for the most part abandoned by the end of 1941, although a similar program for killing handicapped and “anti-social” children at Vienna’s Steinhof Psychiatric Hospital continued until 1945, eliminating what Hitler called “lives unworthy of life.” The brains of the murdered children, preserved for research purposes, are only now to be given burial, after recent publicity in Austria concerning what were described at the time as “death accelerations.”

Nazism gave eugenics a bad name. As a result there now is a nervous refusal to admit that any differences at all exist between groups of people. It is all but impossible to talk about “race,” whatever race is. Probably this is a good thing. Possibly it is not, since there could eventually be a cost to be paid for the claim that there are no distinctions to be discussed.

The obvious lesson is not only that theories, even ostensibly progressive theories, can be deadly, which we knew, but also that when a theory requires that people be made to suffer here and now in the cause of some grand future project, we should just say no.

Another lesson concerns the consequences of professedly value-free science, when closed to criticisms founded on philosophical or religious considerations. The record of eugenics is pertinent to the debate over new developments in genetic research and engineering, which, some claim, now offer us an opportunity vastly to improve mankind by remaking men. 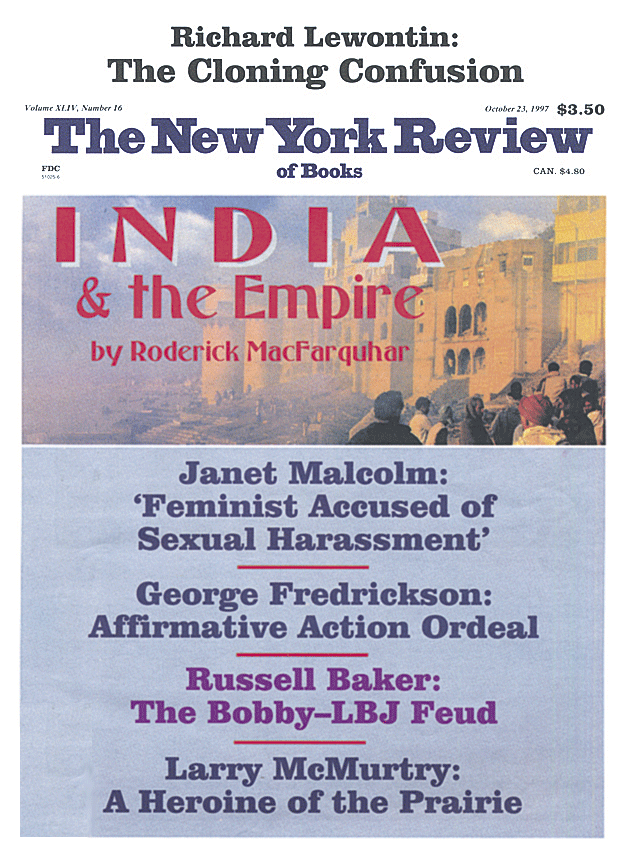 ‘Challenge to the Church’

Challenge to the Church

‘Challenge to the Church’

Challenge to the Church

The Fire Next Time