Among the Missing from the October 9, 1997 issue

I must respond to Gordon A. Craig’s review of E. Simpson’s The Spoils of War: World War II and Its Aftermath: The Loss, Reappearance, and Recovery of Cultural Property and Hector Feliciano’s The Lost Museum: The Nazi Conspiracy to Steal the World’s Greatest Works of Art [“Among the Missing,” NYR, October 9, 1997].

Toward the end of his article, Mr. Craig quotes remarks by Hector Feliciano which seem to cast doubt on the attitude of the museums of France toward reparations. I refer to the following passage: “‘Whatever the case…how could the curators of France’s museums not have ascertained these facts themselves after all these years?’ And why did they discourage his own search and refuse to allow him to see relevant documents? ‘The only reason can be the lack of any will to learn who the owner was, or why he never reclaimed the work.”‘

Allow me to draw your readers’ attention to certain facts:

Jacques Jaujard was director of the national museums of France under the Occupation. In 1939, he began evacuating treasures of the Louvre, crating them and shipping them off to the provinces where they could be stored in various châteaux in the southern Loire Valley. Equally concerned over the fate of private collections, he did everything in his power to ensure their safety as well, in some cases finding them a temporary haven in the vaults of our national museums. (This was true of the collections of Roger Lévy, Jacobson, Leven, Reichenbach, Raymond Hesse, Léonce Bernheim, Simon Lévy, Kapferer, Erlanger, and David-Weill.) Some collections had been confiscated and in some cases put up for sale by central Vichy’s government offices; but the national museums acquired parts of them by exercising their right of preemption as soon as they came on the market. (In this way forty-nine treasures of the celebrated Schloss collection were returned to that family after the war, and more than two hundred Iberian idols from the Stora collection were eventually left by their owner to the Museum of National Antiquities, which had acquired them by right of preemption before they were put up for sale by the various regional offices in charge of state property. The Maurice de Rothschild collection was subject to a fictive “sale” by right of preemption; in reality, it was simply transferred to unoccupied territory.) Lastly, forged documents were predated, in some cases, so as to make it appear that private collections had been acquired by the museums of France before the war. (The collections of Claude Roger Marx and the family Calmann-Lévy are cases in point.)

Mr. Craig completely ignores the essential role played by Jacques Jaujard’s colleague, Rose Valland, who oversaw the Jeu de Paume. That museum, which had previously housed work of the modern period from the foreign schools of painting, was seized by the Nazis for use by the EER (Einsatzstab Reichsleiter Rosenberg)—the principal agency responsible for the looting of art treasures—and turned, in effect, into a gare de triage, a center for sorting pillaged art. For four solid years, Rose Valland worked tirelessly gathering information about the provenance of plundered art that came through the Jeu de Paume and keeping track of where it went in Germany, work in which she reported regularly to Jaujard. Without her efforts, the instances of stolen art restored after the war would have been nowhere near as numerous.

In the autumn of 1944, the Commission on Art Recovery (CRA) was set up at the instigation of Jacques Jaujard, the director of the national museums of France. From this point on, the museums of France worked closely with that agency to see to it that their inventories were administered in strict accordance with Valland’s researches and the records she had collected.

Based on the statements of 2290 victimized families, a “Directory of Artwork Looted During the Second World War” was published. It consisted of fourteen volumes which were disseminated throughout France—to museums, galleries, and antiquarian dealers—as well as in Switzerland, the United States of America, Austria, Italy, and Germany. It was kept up to date until 1956. Between 1944 and 1949, close comparison of this directory with the information collected by Rose Valland, along with inquiries conducted by the Ministry of Foreign Affairs and by the various regional state governments, made possible the restitution of 45,411 artworks and art objects—out of some 61,257 that had been gathered from “collecting points” that had been earmarked by the Allies in Germany.

The administrative management of recovered artwork now entered a second phase. A decree issued on September 30, 1949, put an end to the work of the Commission on Art Recovery, and the handling of current and future cases was placed in the hands of a branch of the Ministry of Foreign Affairs—the Office of Goods and Private Property (OBIP). The Direction des Domaines—an office responsible for administering state properties—was instructed to put up for sale the roughly 13,000 remaining pieces that were either of indeterminate origin or else of no very great artistic value. But the office of the national museums of France intervened, stipulating that the pieces of greatest interest should be entrusted to their keeping—as with cases of forgery, so as to keep them from circulating on the open market. Nevertheless, the terms of the 1949 decree required that a commission be set up to judge which among the artworks should be put up for sale by the Direction des Domaines and which should be left, for the time being, in the museums.

This last category consisted of 2,058 artworks and art objects, including 1,029 paintings. Some of these, of uncertain origin, were of course still liable to be claimed by eligible parties; but by this time it was known that the great majority had not been plundered at all, but acquired on the Paris art market by dealers and collectors, Goering and Hitler among them, and German museums.

According to the terms of the 1949 decree, museums were required to exhibit the 2,058 works and art objects entrusted to their care, and to list them in temporary inventories and make those inventories available to eligible parties. These conditions were complied with. Each museum and relevant section of the Louvre does indeed keep on file a provisional inventory which anyone wishing to claim a work of art is entitled to consult.

An exhibition of all these works was held at the Château de Compiègne from 1950 to 1954. During this period the museums pursued their own inquiries, without prompting from the private individuals concerned, and as a result some thirty acts of restitution were carried out. Following this exhibition—it occupied fifty-four rooms and several galleries and was widely publicized—many of the works were stored in the national museums; and the rest, in accordance with the specific terms of the 1949 decree, were deposited in regional museums. At the same time, the decree planned that a final date for claims be fixed. In fact, in spite of three attempts to get a bill passed, no specific date for the end of this delay was ever set (on obvious moral grounds). It is for precisely this reason that the museums of France always take the position that they have no more than custody of these works, and not outright ownership of them.

To suggest that our museums have lost interest in following up on the provenance of unclaimed artworks (called MNRs* ) is inaccurate and unfair. I would recall, first, that Rose Valland, the person most knowledgeable about these matters, continued her investigations well into the 1970s, until she retired from professional life. Furthermore, the investigations have been conducted by curators in each case whenever an unclaimed artwork has had occasion to be exhibited. It must be remembered that before the fall of the Berlin Wall and the publication of previously classified American records in the mid-1980s—two events that brought these matters to the attention of the public and media—demands for restitution of pillaged art had virtually ceased, and that the tendency to let such matters drop predominated among the people who had suffered most during the war.

In 1991 the Commission on Artistic Recovery’s archives were turned over by the office of the national museums of France to the Ministry of Foreign Affairs’ Office of Archives and Documentation, which succeeded the Office of Goods and Private Property in taking responsibility for following up these cases. The 800 containers that hold these archives are now undergoing systematic classification and analysis with the aim of compiling a scientific illustrated catalog of MNRs to be published by the Réunion des musées nationaux. In anticipation of this publication, which will commence with the category of paintings and drawings, a website—“Catalogue des MNRs”—was set up in November of 1996, at the Ministry of Culture’s home page, on which photographs and full descriptions can be found for each one of the 2,058 relevant artworks. Research continues and, as it progresses, information about the histories of the works is continually updated. This research further confirms that the great majority of works were not looted by the Nazis but acquired by the Germans on the open market during the Occupation. Of the 1,029 relevant paintings, scarcely fifteen would have passed through the Jeu de Paume, thereby qualifying for the classification of objects plundered. Furthermore, only about a dozen of the claims for restitution that are now being considered by the Ministry of Foreign Affairs concern MNRs.

With my thanks for the opportunity to make these facts known to your readers,

In her reply to my article “Among the Missing,” Françoise Cachin says that I completely ignored “the essential role [of]…Rose Valland, who oversaw the Jeu de Paume.” If I did so, it was because I considered Valland’s valorous service during the war years in keeping records of art stolen by the Nazis (about which I wrote in an earlier article in The New York Review, “Loot,” November 17, 1994) largely irrelevant to the argument of Hector Feliciano’s The Lost Museum, the book that I was reviewing.

Mr. Feliciano’s basic question was why, during the fifty years following the end of the Second World War, French national museum authorities and the French government showed so little energy and had such indifferent results in identifying the owners of the paintings that had come into their possession. It is a good question, and Mme. Cachin’s letter, which concentrates on administrative arrangements and changes, does not fully answer it. Unless, of course, her statement that until the mid-1980s “demands for restitution of pillaged art had virtually ceased, and that the tendency to let such matters drop predominated among the people who had suffered most during the war” is intended as an answer. If so, it’s not a very compelling one, suggesting as it does that the lack of effort about which Mr. Feliciano complains is explained by a lack of demand that it be made. 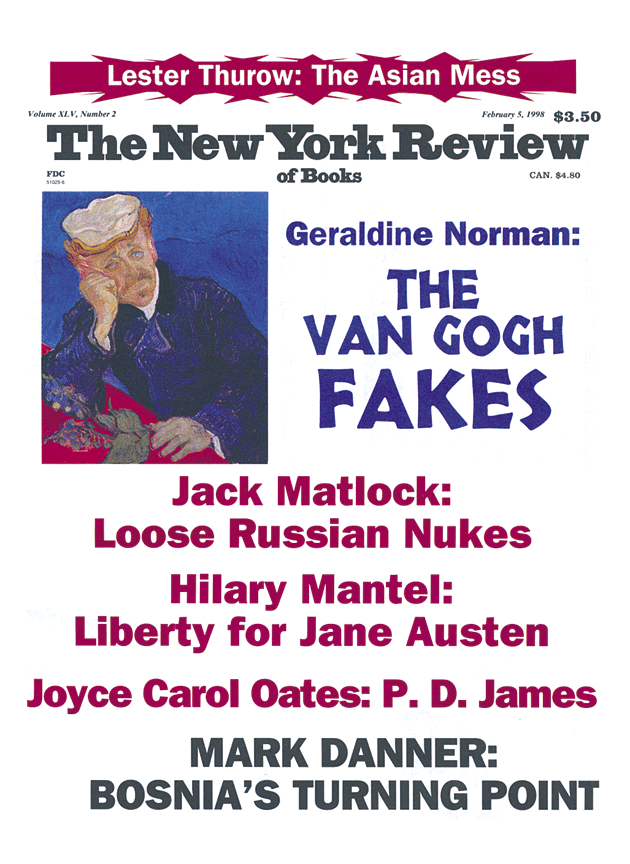 The Art of Our Terrible War

The Torture of Algiers