Since I’m of the generation of musicians who were struck by the revelation of Charles Rosen’s The Classical Style and by the illuminating ideas of his books since that one, I’m sorry to have had to dodge some potshots from him in regard to my book Johannes Brahms: A Biography [NYR, October 22, 1998].

I won’t complain too much about his comments on my writing. That’s a matter of opinion, and among critics and readers it’s a minority opinion. If Mr. Rosen wanted to cite an example of my “appalling” passages, though, it was careless of him to pick one where the presumably appalling part echoes a phrase of Clara Schumann’s (“sweet dalliance”) in a letter of hers I’d just cited.

Mr. Rosen’s books are written for musicians, and I am one of those who admires them not for their prose, but for the often remarkable things they say about the music. I write scholarly biography for nonmusicians as well as musicians and make no apology for that. In my view Western classical music is not primarily an intellectual or tenure-achieving or even moneymaking exercise, but rather something important and exciting that people do for people. I write expressive and engaged prose because that’s how I feel about my subjects, and that’s how my subjects experienced their lives and their art. No apologies for that either. (I suspect the parts of the book that other reviewers have cited for their “poetry” are exactly the ones that most irritate Mr. Rosen.)

In taking me to task for holding to the old story that the teenaged Brahms played in waterfront bar/brothels, Mr. Rosen is following mainstream academic opinion. That opinion was formed by Kurt Hofmann’s 1986 book Brahms und Hamburg, in which the author waved away the “myth” of the bars, saying the story is “nowhere verified” by Brahms’s friend and biographer Max Kalbeck, “and is simply false.” With due respect for a distinguished scholar, I believe Herr Hofmann is wrong.

I won’t go into my argument in detail here, because I’ve written an article summarizing his and my evidence. The article will be published either in print or on line during the next year. As the article shows, there is no question that the “myth” of the bars originated not with biographer Kalbeck but with Brahms himself. He related the story all through his life to any number of people, telling friends that it wrecked his relations with women, telling Clara Schumann (as her daughter recalls it) that “he saw things and received impressions that left a deep shadow on his mind.”

So Herr Hofmann’s theory requires us to believe that Brahms spent his life fomenting, in Brahms’s terms, a shameful and humiliating lie about himself. Hofmann’s evidence for this revisionism, however, is entirely circumstantial. Anyone reading my biography will understand that for a man like Brahms, who for all his faults was a remarkably honest, self-aware, and commonsensical person, Hofmann’s theory is far less believable than this scenario: Brahms told the truth about the bars, as he generally did about everything else.

In my book I take Brahms at his word: he played in sleazy waterfront bars as a teenager, was sexually abused by prostitutes there, and the experience traumatized him. It was because of the depth of trauma he spoke of that I added a speculation, contained in the passage Mr. Rosen cited: perhaps Brahms was abused by sailors as well. Mr. Rosen and another critic have tacitly accused me of adding that detail for sensational effect. (Others have accused me of timidity in regard to Brahms’s sex life, so I break even.)

I thought a long time about that sentence concerning the sailors, and left it there for two reasons. First, there is the trauma Brahms spoke of, the “deep shadow on his mind.” This heartfelt statement is hard to understand if he were abused only by prostitutes, because Brahms frequented brothels from his teens on. Why would the ordinary activities of the places remain so terrible in his memory? (Brahms was, in fact, tough as nails.) Second, the bars were frequented by sailors fresh off the sea. What was to stop the worst of them from abusing a beautiful boy who was entirely at their mercy?

As Mr. Rosen notes, my biography doesn’t mention Kurt Hofmann’s book, and there’s no doubt I should have. During the galley phase I told my publisher I wanted to add an appendix about Hofmann, but the request was refused. In hindsight, I should’ve fought for the appendix, but that’s hindsight. (In the publisher’s defense, the book was nearly a year late and from the beginning was intended to come out during the Brahms anniversary year of 1997. It appeared in late November of that year.)

In other words, I’m not complaining about Mr. Rosen’s complaints about the bars in my book. He’s not a biographer, and he’s following received opinion. I’m quarreling with that opinion, so for the moment the burden is on me. I refer the reader again to my forthcoming article. I’ll add that I have no investment in the bar story or in any other aspect of Brahms’s life other than what I’m convinced is true. I am persuaded by some details of the Brahms family finances that Herr Hofmann uncovers, and plan to revise my book accordingly. The changes will amount to a few sentences in the first chapter, mostly having to do with the house and neighborhood in which Brahms was born: they were not the slums later biographers describe.

It’s been an interesting if ambiguous experience, to be chided in print by a musician I’ve admired for some two decades.

Whatever Clara Schumann wrote, it wasn’t “sweet dalliance,” since she wrote in German. Nor is “sweet dalliance” proper modern English. Today it is either highfalutin or facetious. It is unlikely that Clara meant either effect. If Swafford intends his translation to make fun of Clara, he should have made it clear that it was a joke. If he wanted to translate her letters in an outdated period style, he should have done so consistently. In addition, I am not sure just what “sweet dalliance” is supposed to mean: sentimental conversation, flirtation, or what has recently been termed an “inappropriate relationship” that stops short of penetration? I am relieved that Professor Swafford does not admire my prose.

I will be very interested if Professor Swafford’s forthcoming article presents real evidence that little Brahms was molested by prostitutes. Even if the challenged opinion that the cafés he played in as a child were brothels is accepted, the rest is speculation. The secondhand evidence is that he said he “saw things and received impressions.” Any port city like Hamburg may present scenes that might shock a child. Swafford leaps from this to an assertion that what Brahms saw was things being done to him, the impressions received were prostitutes’ hands on his young private parts. This is how he takes Brahms at his word. He makes a further leap and assumes that being the object of sweet dalliance by prostitutes as a pubescent child will cause a man to be incapable later of a relationship with a respectable woman. Of course, this could be the result of having found the attentions of prostitutes rather agreeable so that the elderly Brahms preferred frequenting brothels to marriage, but this is not horrid enough for a modern biographer. We need a further speculative leap: How about sexual abuse by sailors?

It is proper for a biographer to speculate, but not to take his speculations for proven fact and to keep returning to them throughout the book in order to explain his subject’s psyche. My own theory about Brahms’s inability to achieve a satisfactory love affair or a marriage was his early passion for Clara Schumann: he wrote to Joachim that his love for her made it impossible for him to be interested in younger women. As an ambitious twenty-one-year-old composer, nevertheless, he may well have drawn back from marriage to an internationally famous pianist with eight children when Robert Schumann died. For years afterward, however, she was clearly jealous of any interest he showed in another woman, and yet his attachment to her endured, even if they rarely saw each other. My theory is not lurid enough for some tastes, and it is speculative, too, but at least it does not require the baroque construction of Professor Swafford. 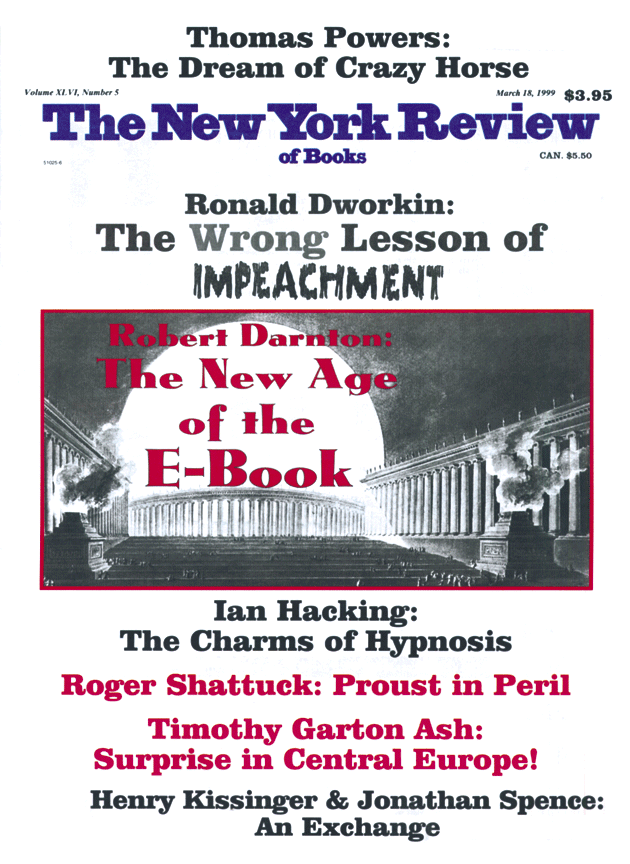