The following speech was given by President Havel in New York on September 19, 2002, at the Graduate Center of the City University, on the occasion of his last official trip to the United States as President of the Czech Republic.

I still have vivid memories of the concert almost thirteen years ago—in February 1990—when New York welcomed me as the freshly minted president of Czechoslovakia. It was not, of course, just to honor me personally. Through me, it was a way of honoring all those fellow citizens of mine who, by nonviolent action, were able to overthrow the vicious regime that ruled over our country. And it was also to honor all those who, before me, or with me, had resisted this regime, again by nonviolent means. Many freedom-loving people throughout the world saw the victory of the Czechoslovak Velvet Revolution as heralding hope for a more humane world, one in which poets might have as powerful a voice as bankers.

Our gathering today, no less warm and impressive, quite naturally leads me to the question of whether I have changed in those almost thirteen years, of what that incomprehensibly long sojourn as president has done to me, and in what ways the countless experiences I have lived through in these tumultuous times have changed me.

And I’ve discovered an astonishing thing: although it might be expected that this wealth of experience would have given me more and more self-assurance, confidence, and polish, the exact opposite is true. In that time, I have become a good deal less sure of myself, a good deal more humble. You may not believe this, but every day I suffer more and more from stage fright; every day, I am more afraid that I won’t be up to the job, or that I’ll make a hash of it. It’s harder and harder for me to write my speeches, and when I do write them, I am more fearful than ever that I will hopelessly repeat myself, over and over again. More and more often, I am afraid that I will fall woefully short of expectations, that I will somehow reveal my own lack of qualifications for the job, that despite my good faith I will make ever greater mistakes, that I will cease to be trustworthy and therefore lose the right to do what I do.

And while other presidents, younger than me in terms of their time in office, delight in every opportunity to meet each other, or with other important people, to appear on television or deliver a speech, all of this simply makes me more fearful. At times, the very thing I should be welcoming as a great opportunity I deliberately try to avoid in the almost irrational fear that I will, in one way or another, squander the opportunity and perhaps even harm a good cause. In short, I seem more and more dubious, even to myself. And the more enemies I have, the more I side with them in my own mind, and so I become my own worst enemy.

How am I to explain this thoroughly improbable development in my personality?

Perhaps I will think about this more deeply once I am no longer president, which will happen at the beginning of next February, once I have time to withdraw for a while, to gain a certain distance from politics and—as an entirely free man again—start writing something other than political speeches.

For now, however, let me suggest one of many possible explanations for this state of affairs. As I grow older, as I mature and gain in experience and reason, I am gradually coming to realize fully the measure of my responsibility and of the strangely varied obligations that flow from the job I accepted. Moreover, the time is inexorably approaching when those around me, the world, and—what is worse—my own conscience will no longer ask me what my ideals and goals are, what I wish to achieve and how I wish to change the world, but rather will start asking me what I have actually achieved, which of my intentions I have realized and with what results, what I would like my legacy to be, and what kind of world I would like to leave behind me. And suddenly I feel that the very same spiritual and intellectual unease that once compelled me to stand up against the totalitarian regime and go to jail for it is now causing me to have such deep doubts about the value of my own work, or the work of those I have supported, or those whose influence I have made possible.

In the past, when I would receive honorary degrees and listen to the laudatory speeches made on those occasions, I often had to smile to myself at how, in so many of those tributes, I came across as a fairy-tale hero, a boy who, in the name of the good, beat his head against the wall of a castle inhabited by evil kings, until the wall fell down and he himself became king and and then went on to rule wisely for many long years. I have no wish to make light of such occasions; I value deeply all of my doctorates and I am always moved when I receive them.

Nevertheless, I mention this other, somewhat humorous, side of things because I am just beginning to understand how everything has, in fact, been a diabolical trap set for me by destiny. Because I really was catapulted overnight into a world of fairy tales, and then, in the years that followed, had to return to earth, the better to realize that fairy tales are merely a projection of human archetypes and that the world is not at all structured like a fairy tale. And so—without ever having tried to become a fairy-tale king, and despite finding myself practically forced into this position, through an accident of history as well—I was given no diplomatic immunity from that hard fall to earth, from the exhilarating world of revolutionary excitement into the mundane world of bureaucratic routine.

Please understand me: I’m not saying at all that I have lost my fight, or that everything has been in vain. On the contrary, our world, humanity, and our civilization find themselves at perhaps the most important crossroads of their history now. We have a greater chance than ever before in recent times to understand our situation and the ambivalence of the direction we are headed in, and to decide in favor of the way of reason, peace, and justice, not for the way that leads to our own destruction.

I am saying only this: to set out on the path of reason, peace, and justice means a lot of hard work, self-denial, patience, knowledge, a calm overview, a willingness to risk misunderstanding. At the same time, it means that everyone ought to be able to judge his or her own capacity and act accordingly, expecting either that one’s strength will grow with the new tasks one sets oneself or that it will run out. In other words, there is no more relying on fairy tales and fairy-tale heroes. There is no more relying on the accidents of history that lift poets into places where empires and military alliances are brought down. The warning voices of poets must be carefully listened to and taken very seriously, perhaps even more seriously than the voices of bankers or stock brokers. But at the same time, we cannot expect that the world—in the hands of poets—will suddenly be transformed into a poem.

Be that as it may, there is one thing I know for certain: that regardless of how I played the role allotted to me, and regardless of whether I wanted it in the first place, or deserved it, and regardless of how much or how little I am satisfied with my efforts, I understand my presidency as having been a magnificent gift of destiny. After all, I have had the opportunity to take part in truly world-changing historical events. And that—as an experience of life and a creative opportunity—has been worth all the traps that lay hidden within it.

And now, if you will allow me, I will at last try to gain some distance from myself and attempt to formulate three of my old certainties, or rather my old observations, that my time in the world of high politics has only confirmed:

(1) If humanity is to survive and avoid new catastrophes, then the global political order has to be accompanied by a sincere and mutual respect among the various spheres of civilization, culture, nations, or continents, and by honest efforts on their part to seek and find the values or basic moral imperatives they have in common, and to build them into the foundations of their coexistence in this globally connected world.

(2) Evil must be confronted in its womb and, if there is no other way to do it, then it has to be dealt with by the use of force. If the immensely sophisticated and expensive modern weaponry must be used, let it be used in a way that does not harm civilian populations. If this is not possible, then the billions spent on those weapons will be wasted.

(3) If we examine all the problems facing the world today, be they economic, social, ecological, or general problems of civilization, we will always—whether we want to or not—come up against the problem of whether a course of action is proper or not, or whether, from the long-term planetary point of view, it is responsible. The moral order and its sources, human rights and the sources of people’s right to human rights, human responsibility and its origins, human conscience and the penetrating view of that from which nothing can be hidden with a curtain of noble words—these are, in my deepest convictions and in all my experience, the most important political themes of our time.

Dear friends, when I look around me and see so many famous people who appear to have descended from somewhere up there in the starry heavens, I cannot help feeling that at the end of my long fall from a fairy-tale world onto the hard earth, I suddenly find myself once more inside a fairy tale. There is perhaps only one difference: now I can appreciate this feeling more than I was able to in similar circumstances thirteen years ago. 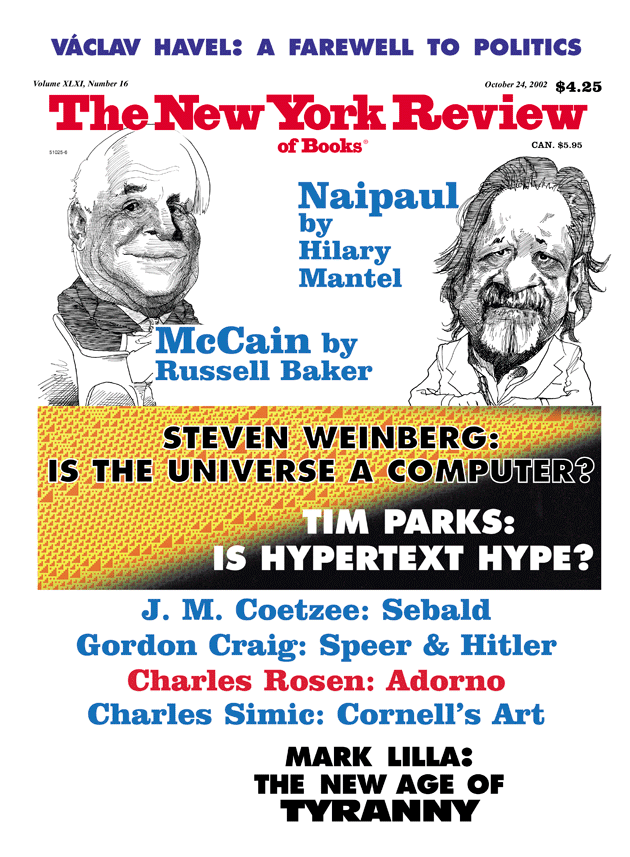