In his review of D.D. Guttenplan’s American Radical [NYR, September 24], Jonathan Mirsky rejects our observation in Spies: The Rise and Fall of the KGB in America that evidence from KGB archives documents I.F. Stone’s status as a KGB agent from 1936 until at least the end of 1938, insisting that most of our claims have been refuted by D.D. Guttenplan. By not even mentioning the evidence we provide, he misleads readers who will be unaware just how unconvincing Guttenplan’s argument is. The evidence against Stone comes from documents recorded by Alexander Vassiliev at a time when he had access to Soviet intelligence files. And even Mr. Guttenplan has by now admitted that the documents are genuine.

A KGB New York station report in April 1936 noted that Isidor Feinstein (then Stone’s name), a commentator for the New York Post, had been suggested as a possible recruit by another journalistic source. By May, “Relations with Pancake [Stone] have entered the channel of normal operational work.” Over the next several years, Stone worked closely with the KGB, chiefly as a courier and recruiter.

In the review that Mr. Mirsky so much admires, Mr. Guttenplan claimed that for dramatic purposes we misled our readers and falsely inserted quotation marks around the sentence that Stone had entered “the channel of normal operational work.” This is false. If Mr. Guttenplan had bothered to read Spies carefully, or to actually look at the original document, available on the Web, he would have noticed that it is a direct quotation from a KGB report.

Mr. Guttenplan speculated with no evidence that KGB officers were habitual frauds, reporting back to Moscow that they had recruited people who were, in fact, simply casual acquaintances. The KGB had mechanisms ensuring that no one officer could recruit and run a source exclusively. Moreover, in the late 1930s, with a Stalinist purge of its stations underway, KGB officers were reporting on supposed mistakes and violations of proper tradecraft by their colleagues. In this atmosphere, any KGB officer creating a fictitious agent was likely signing his death warrant.

There is another document we cite that Mr. Guttenplan scrupulously avoids mentioning. It is a KGB New York station list of its “agentura” in the latter half of 1938. “Agentura” is a KGB work term and defined in Vasily Mitrokhin’s KGB Lexicon as “a collective term for agents,” who are individuals

Nor are we the only people who have examined this material and concluded that it demonstrates that Stone cooperated with Soviet intelligence. Max Holland wrote a detailed and meticulous paper examining these allegations and others swirling around Stone and concluded the same thing (“I.F. Stone: Encounters with Soviet Intelligence,” in the Journal of Cold War Studies, Summer 2009, and on the Web at www.mitpressjournals.org/doi/pdf/10.1162/jcws.2009.11.3.144).

The Nation, where Mr. Guttenplan’s review appeared, has a long history of proclaiming the innocence of Soviet spies, most notably Julius Rosenberg and Alger Hiss. Just as their defenders have slowly and ungracefully retreated, those who refuse to examine the evidence about I.F. Stone will rue their uncritical defense of his actions.

Since the letter from John Earl Haynes and Harvey Klehr mainly concerns D.D. Guttenplan’s review of their book in The Nation rather than my review of American Radical in these pages, he has sent me the following comment:

Historians, like journalists, should always be wary of consensus. So perhaps it would be useful to your readers if I explained why, as I.F. Stone’s biographer, I share the views of Jonathan Mirsky, Geoffrey Wheatcroft (“Digging for Moles,” NYR, October 22), Robert Kaiser (“Heart of Stone,” Columbia Journalism Review, July/August 2009), and numerous others that Stone was never a Soviet spy, or even a witting agent.

Even J. Edgar Hoover, who loathed Stone, and in the 1950s made him the target of a full-scale espionage investigation encompassing daily surveillance, wiretaps, and mail and garbage “covers,” reluctantly concluded that his adversary was exactly what he seemed: an unabashed independent radical who concentrated his fire on his own government.

Haynes and Klehr claim to have new evidence proving that “Stone was a Soviet spy” in the form of notebooks compiled by Alexander Vassiliev, a former KGB officer, purporting to record documents in Soviet archives. All the notes pertaining to Stone come from the so-called “Black” notebook, where on page 23 (a photocopy of the Russian original appears on page 144 of Spies ) we read:

p. 283 Letter dated 20.5.36
Relations with “Pancake” have entered “the channel of normal operational work.” He went to Washington on assignment for his newspaper. Connections in the State Dep. and Congress. Knows Prince.

There follows an account of some gossip “Pancake” passed along about Karl von Wiegand, a Hearst correspondent in Berlin, who “had been ordered to maintain friendly relations with Hitler” and complained about this to “Pancake’s boss.” The same entry goes on to say that William Dodd Jr., son of the US ambassador to Germany, was present and expressed an interest in “anti-Fascist work.” The next entry notes that “Pancake” established contact with Dodd, followed a few lines later by a report from August 1936 that “Pancake” gave Dodd the name of a contact in Berlin. It also says that Dodd in turn passed along the name of an embassy employee “suspected of having ties with the Fascists” and concludes, bizarrely enough, by stating “the American military attaché in Berlin gave [Dodd’s] father information that the Germans were planning to go to war with the USSR in the fall of 1936.”

Even if we take Vassiliev’s notebooks on trust, all we can safely conclude is that in 1936 Stone was briefly in contact with someone he might (or might not) have known was a KGB officer, and that the code name “Pancake,” used to identify Stone in 1936, also shows up on a list of “agents” two years later. But since the Soviets frequently recycled codenames, with “Liberal,” for example, referring at various times to both Frank Palmer, a reporter for the Federated Press (a labor wire service that also employed Stone’s brother Marc), and to Julius Rosenberg, we simply can’t be certain to whom the “Pancake” on the 1938 list refers. In any case, code names were also assigned to people who had no clandestine relations with the Soviet Union. (Henry Stimson was given the code name “Bomb.”)

I never claimed Vassiliev’s notebooks were entirely fraudulent, and the suggestion that I was somehow forced to “admit” they are genuine is a red herring, as is the charge that I or anyone else failed to consult “the original document.” Original documents are precisely what we do not have. Their absence is what distinguishes both Spies and The Haunted Wood, an earlier book also based on Vassiliev’s researches, from the many books based on the VENONA material (intercepted KGB cables decoded by the National Security Agency). It is also what prompted Hayden Peake, former curator of the CIA’s Historical Intelligence Collection, in a review of The Haunted Wood, to warn that “because there is no way to check the sources,” in the absence of other corroborating evidence, final judgment “must be withheld.”

Far from using Vassiliev’s notebooks to close cases, responsible scholarship would acknowledge the limits of inference imposed by the selective nature of Vassiliev’s access to files, our inability to verify his note-taking, and, crucially, the lack of archival context for the material we do have. Instead Haynes and Klehr engage in a regrettable rush to judgment.

Had they bothered to consult the record of their coauthor’s 2003 libel trial they would have discovered, as Amy Knight points out in her review of Spies ( TLS, June 26, 2009), the contradictions between Vassiliev’s account of his note-taking in Spies and his sworn testimony.

Equally a matter of public record is the fact that Vassiliev couldn’t convince a jury—in Britain, where the libel laws are notoriously favorable to plaintiffs—that the characterization of him, in a review of The Haunted Wood, as “an unreliable author whose identification in the book of persons who worked for the KGB is in part wrong, in part based on out-of-context information, and in part mere guesswork” was unfair. And while Haynes and Klehr may disagree, I don’t think it unreasonable to ask whether Vassiliev—who still has an outstanding £70,000 costs order from his libel trial—was paid for his notebooks, and if so by whom.

My objection to “the channel of normal operational work” has nothing to do with punctuation, but with the spurious implication that the phrase is a KGB term of art. Haynes and Klehr never acknowledge that in 1938 Soviet agents in America were under immense pressure to produce results, with slackers facing recall to Moscow (where several, including Vladimir Gorev, the man who recruited Whittaker Chambers, were executed in Stalin’s purge). Outright fabrication was indeed dangerous, but exaggeration—pripiski (literally “over-reporting”)—was endemic. Finally, Haynes and Klehr never address the possibility that Stone may have been used “blind”—vtemnuyu (“in the dark”)—a common KGB practice.

Curiously enough there is an illuminating discussion by Alexander Vassiliev of the difference between blind and witting “agentura“—not in Spies, but in Istochniki v Vashingtone (Sources in Washington), the title of the first draft that Vassiliev sent to Allen Weinstein, his coauthor on The Haunted Wood. Though Haynes and Klehr seem not to have read it, this manuscript is among Weinstein’s papers at the Hoover Institution.

Unlike the charge of spying, there is evidence for both sides of the argument about whether, in 1936–1938, I.F. Stone might have been a witting source for Soviet intelligence. He was, as I write in American Radical, “an enthusiastic fellow traveler” right up until the Nazi–Soviet pact. And though Haynes and Klehr show that Walter Lippmann was a far more productive source for the Soviets than Stone, it wouldn’t surprise me to learn that Stone happily traded information with a Tass correspondent in 1936—when the Soviet Union was a potential ally, not an enemy—whether or not he suspected the man had other duties. For readers who want a more considered discussion of these questions my review of Spies is on The Nation ‘s Web site. 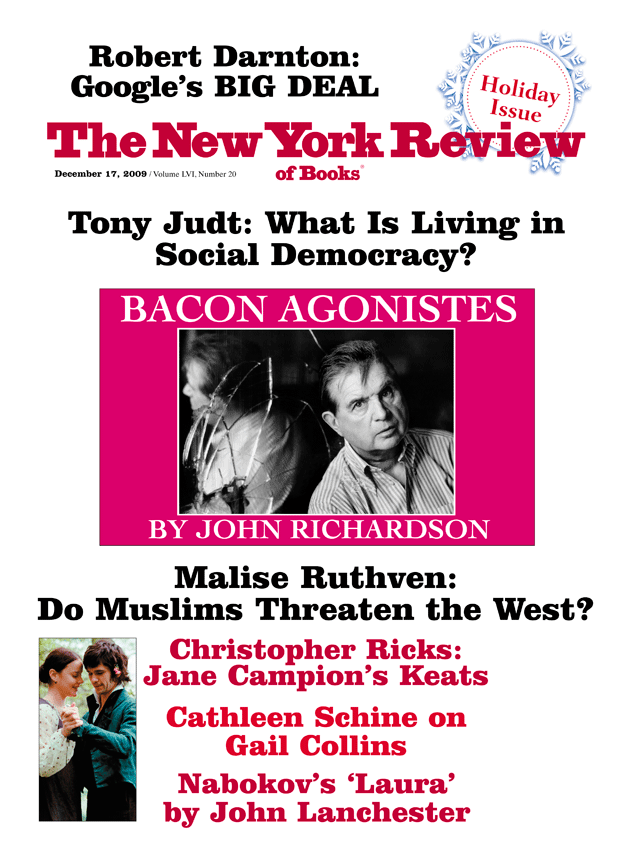 ‘The Problem of Evil’: An Exchange

The Attack on I.F. Stone