During the two weeks before the Super Bowl there were more than 10,000 news articles written about the slight deviation in air pressure of the footballs used by the New England Patriots in their American Football Conference Championship victory over the Indianapolis Colts. The Patriots quarterback Tom Brady, in an attempt to defuse conspiracy allegations, joked in a press conference, “Things are fine—this isn’t ISIS.”

He was right: it wasn’t ISIS. During those two weeks, the Islamic State of Iraq and Syria was the subject of only seventy-nine articles in The New York Times. “Deflate-gate” was the subject of eighty. These included interviews with football players, who explained why a deflated ball was easier to throw and catch; physicists, who suggested that the deflation might have occurred due to climate effects; logisticians, who opined on the time necessary to deflate a football; and a seamstress of Wilson footballs who vowed, “It’s not Wilson’s fault.” Even the leader of the free world felt obliged to make a statement. “Here’s what I know,” said President Obama on Super Bowl Sunday. “The Patriots were going to beat the Colts regardless of what the footballs looked like.”

In that period Andy Studebaker’s name appeared in only nine articles, all published in sports blogs. Studebaker is the twenty-nine-year-old backup linebacker for the Colts who, while defending a punt return, was blindsided with a gruesome hit to the chest by the Patriots’ backup running back Brandon Bolden. Studebaker’s head jerked back and he landed on his neck. On the sideline after the play Studebaker was seen coughing up blood.

Nor was much made of the fine levied on professional monster Clay Matthews of the Green Bay Packers for illegally smashing into the defenseless head of Seattle Seahawks quarterback Russell Wilson in the National Football Conference Championship game. Matthews’s fine was $22,050, or approximately what he earns every ninety seconds of game play. There was also little attention given to the fact that, in the second half of that game, Seattle cornerback Richard Sherman injured his left arm so badly that he couldn’t straighten it; he played the final quarter with it bent and pressed tightly to his chest like a chicken wing.

Was it broken? Badly sprained? Was he given shockingly powerful illegal or legal drugs in order to endure the pain? The league, and Seattle, were mum on these points. When asked ten days later about the injury, Sherman said, “It’s a little sore, but not too bad.” Then, with a wink: “That’s my story and I’m sticking to it.” Minutes after the Super Bowl ended it was revealed that Sherman had torn ligaments in his elbow and will have to undergo reconstructive surgery.

NFL Commissioner Roger Goodell might have been grateful for the deflation controversy because it distracted from what otherwise have been the season’s two dominant storylines: the league’s reluctance to discipline players who commit domestic violence and its failure to protect its players from brain damage. But Goodell didn’t need the help. Every thinking fan must, in order to enjoy any NFL game, consent to participate in a formidable suspension of disbelief. We must put aside our knowledge that nearly every current NFL player can expect to suffer from chronic traumatic encephalopathy, a degenerative disease that leads to memory loss, impaired judgment, depression, and dementia.

Football players are also four times more likely both to die from ALS (a fact that Goodell, despite participating in this past year’s ALS ice-bucket challenge, refuses to acknowledge) and to develop Alzheimer’s disease. An NFL player can expect to live twenty years less than the average American male. The average NFL career lasts 3.3 years. By that measure, each season costs an NFL player about six years of his life. Football fans, in other words, must ignore the fact that we are watching men kill themselves.

We must also ignore the fact that we are supporting an industry so averse to negative press that for decades it has systematically covered up incidents of domestic violence, sexual harassment, and bullying within its ranks. More than half of the players accused of sexual assault during Goodell’s nine-year term have avoided punishment. We must pretend that NFL players, despite all appearances to the contrary, do not ingest large quantities of chronically impairing, performance- enhancing drugs. We mustn’t mind that, while the players are mostly black, the league’s main beneficiaries are the team owners, all of whom are white, and the majority of whom are male billionaires. (The Green Bay Packers, owned collectively by their fans and governed by a board of directors, are the single exception.)

If some of the league’s sins remain foggy to the average NFL fan, it may have something to do with the NFL’s tenacious public relations policy. Goodell, the son of a New York senator, has sought the help of Republican pollster Frank Luntz to draft his public statements and advise league press strategy. This has resulted in Goodell’s repeating the word “integrity” incessantly during press conferences, and asserting that the rate of concussions has declined thanks to new safety protocols. Yet the victims of the two highest-profile head injuries suffered in this year’s playoffs—Pittsburgh Steelers quarterback Ben Roethlisberger in the Wild Card round and Wilson in the NFC Championship—were both mysteriously exempted from the protocols and allowed to return to the field without medical evaluation.

What, then, explains football’s appeal among Americans? Why do more Americans watch football on Sundays than go to church? Why was this year’s Super Bowl the most-watched television program in history? Why did Americans spend more than $12 billion on food, drink, merchandise, and electronics in preparation for the game?

It is not football’s pace, which is the slowest among professional sports: an average three-hour broadcast contains only eleven minutes in which the ball is actually in play (there is also an hour of commercials). It is not the game’s strategy, the complexity of which many fans are only beginning to appreciate. Though Seattle Seahawks coach Pete Carroll’s disastrous decision to call a goal-line pass at the end of the Super Bowl has yielded a cloudburst of second-guessing, baseball, with its more precise advanced statistics, consistently offers richer opportunities for analysis.

Is it football’s uniquely military symbolism—the offensive approach deriving from formations (wedge, phalanx, strong flank) invented by the Roman and Greek armies, not to mention the aerial attack, the running backs like charging panzers, the annexation of territory? Or is it simply the sheer spectacle of the game, the extravagant graphics, special effects, and celebrity pomp that augment the action on the field?

I thought about this as I watched this year’s Super Bowl, which was one of the most thrilling sporting events in recent memory. My fandom has only increased in recent years, against my better judgment (and even as my New York Giants have foundered). I didn’t have to think very long. The source of the game’s appeal is obvious. It’s the violence. The NFL understands this. Why else would it risk lawsuits and moral indignation? If violence wasn’t a crucial element of the sport’s appeal, the league could institute two-hand touch tomorrow.

An experiment: place a football fan’s brain in an MRI scanner during a game. I would bet that most of the moments of peak activity in the nucleus accumbens—the pleasure center—would correlate with the most violent collisions: a quarterback sacked from his blind side, a running back breaking through a tackle, a receiver laid out by a vicious open-field hit. But the constant threat of violence heightens the stakes even on plays where no actual violence occurs. A perfunctory screen pass or routine handoff, let alone a diving catch, is elevated to high drama by the knowledge that the players are waging not only their careers, but their lives, on each play.

The question is not why the NFL can’t be safer. It’s why we—why Americans, since football is primarily a national obsession—crave its brand of violence. Do we watch simply for the visceral thrill, the same reason we might choose to buy a ticket for the upcoming film Jurassic World (a Super Bowl sponsor)? Or is it an inoculation against real violence; that is, do we watch football in the same way that certain deviants watch extreme pornography to satisfy their perversions? Or perhaps we watch to avoid contemplating the greater violences occurring all around us—of foreign wars, civil rights abuses, environmental collapse, and, per Tom Brady, ISIS.

America is addicted to violence; America is addicted to football. We look up and find ourselves at a strange moment. Our anxiety about the individual violence committed by NFL players, and to them, now receives greater public attention than many of the various forms of mass violence endorsed by our politics. It is easier to attack the Patriots than to attack the crimes committed daily in the name of patriotism. But sports have always been that way: a glorious distraction. 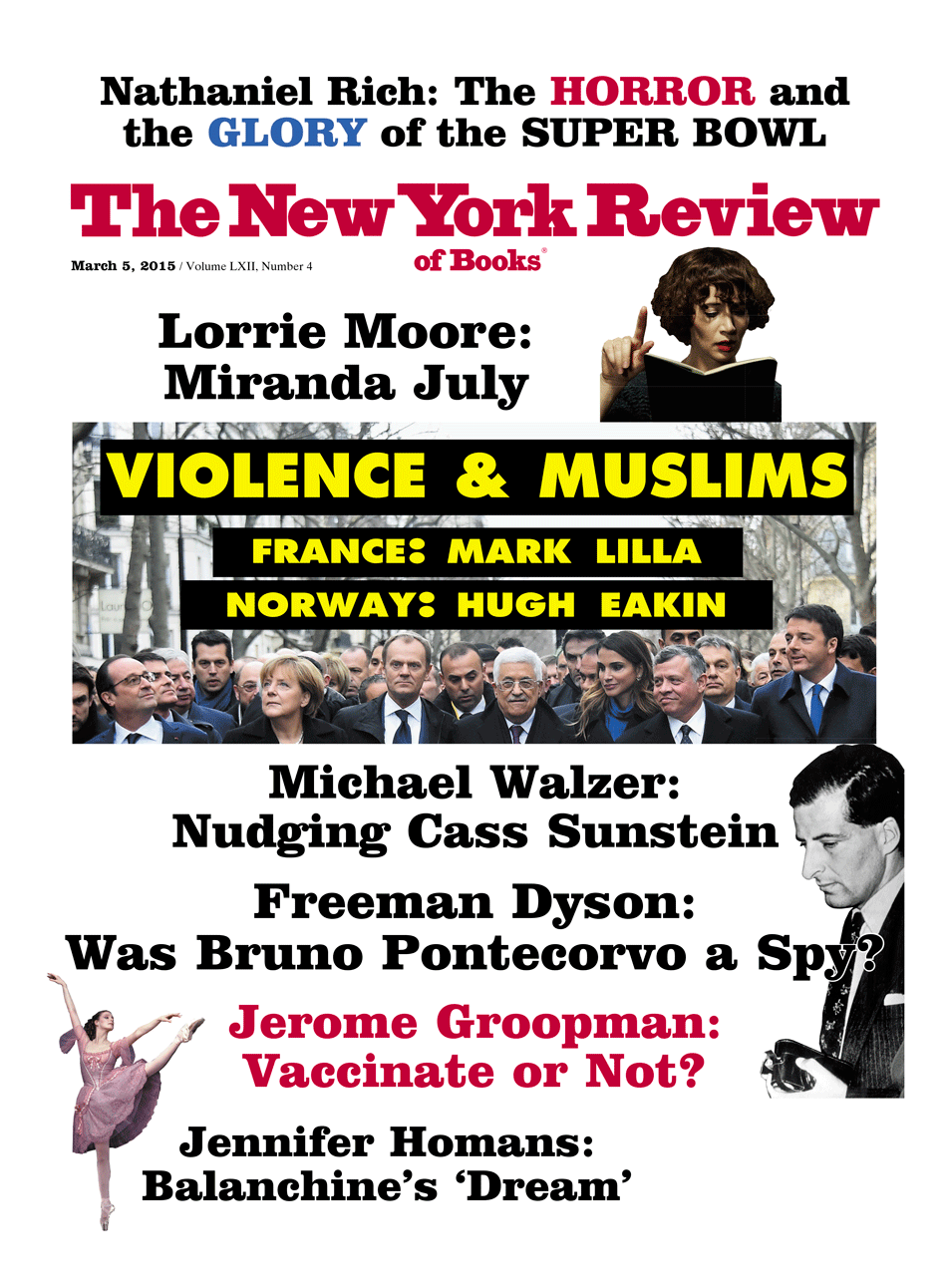 The Damage to NFL Players

The Voice of Big-Time Sports

Blood Lust and the Super Bowl

The reality behind the Super Bowl is superb young bodies being broken and irretrievable harm being done to brains.

Why Is This Man Laughing?