The federal judge Jed S. Rakoff has written a self-congratulatory account of the way he and his fellow judges have responded to the Covid-19 crisis [“Covid & the Courts,” NYR, May 28], in particular regarding applications from inmates for release from prisons run by the federal Bureau of Prisons (BOP). Some federal judges have, indeed, risen to the crisis. But Judge Rakoff’s account of circumstances in federal prisons is shockingly ill-informed.

Judge Rakoff writes that “a few federal prisons have encountered significant numbers of Covid-19 cases, including fatalities, but the great majority have not,” and that only a “small number of prisoners…are reported to have contracted the virus.” Those assertions are wrong. As of May 16, the rate of infection among federal prisoners is approximately six and a half times more than the population of the United States as a whole, with infections per 100,000 people at 4.45 for the general population but 28.56 for federal prisoners.

Judge Rakoff goes on to refer to “the very low rate of coronavirus-related prisoner deaths in the federal system.” That assertion is also wrong. The death rate among prisoners is more than 1.3 times as many as among the general population.

Building on his false assumption that only a “small number of prisoners…are reported to have contracted the virus,” Judge Rakoff asks whether that number is “a function of the isolation imposed on them, or simply of the fact that they have been tested” at a relatively low rate. The question ignores the gravity of the problem: the BOP has systematically covered up the extent of infections among inmates by refusing to test them. For example, at the Metropolitan Detention Center in Brooklyn (MDC)—the country’s largest federal pretrial detention center—the BOP has tested only sixteen of more than 1,600 inmates. Yet of tests that the BOP has conducted nationwide, 70 percent come back positive. And when an outbreak hits a federal prison, the number of prisoners who fall sick is staggering. When the low-security federal prison at Lompoc, California, expanded testing in early May, the number of positive cases soared in just two days from 52 to 541 cases, and by mid-May 882 of 963 inmates tested were infected—that is, more than 90 percent. The federal prison in Butner, North Carolina, reported its first case on March 24, and within six weeks six inmates had died. The federal prison in Terminal Island, California, reported seven cases as of April 13, and within three weeks five inmates had died.

Judge Rakoff also misses the mark in wondering about the success of the BOP’s “prophylactic measures,…such as frequent extended lockdowns of prisoners in their cells.” Dr. Homer Venters—former chief medical officer for the New York City jail system—inspected Brooklyn’s MDC on April 23 and, in an expert report, expressed alarm about multiple systemic failures in its Covid-19 response. He found that the MDC deviated from Center for Disease Control guidelines by not screening many new arrivals; failed to check the temperatures of inmates regularly enough; failed to monitor their heart rate and blood oxygenation at all; failed to screen for symptoms (such as fatigue, shortness of breath, or coughing); generally ignored sick-call requests from inmates or waited days before responding; and regularly destroyed sick-call requests (an apparent intentional destruction of medical records and a gross deviation from basic health care standards). In fact, he found that the MDC refused to track the incidence of Covid-19 symptoms among inmates and concluded that this refusal was intentionally designed to avoid learning the extent of the outbreak and providing necessary medical care.

Judge Rakoff has peppered his article with a series of hard legal questions and correctly comments that fair judges can answer them differently. But his implication is wrong that different answers to hard questions are all equally meritorious. They are not. And there are other pressing questions that judges—and citizens—should ask but Judge Rakoff does not. When, and why, are a significant number of judges oblivious to the unprecedented dangers that the present pandemic poses for the men and women in prison? Which judges are indifferent? When does indifference become callousness, callousness cruelty, and cruelty inhumanity? Present litigants cannot raise those hard questions when making arguments on behalf of particular clients. Future historians will.

Future historians may benefit from the reflections of a judge like Judge Rakoff, who has the luxury of being able to write, according to his introductory paragraph, from the comfort of his judicial chambers. They will also benefit from plumbing the plight of prisoners—the poor, the undocumented, the people of color, the mentally ill, the badly damaged, the foolish, the rash, the misguided—who are trapped with a stranger in a cramped cell looking out through cold bars in dread of an invisible but deadly virus.

We should be grateful for the passionate advocacy that public defenders like Mr. Morris bring to their calling. Over the past few months, Mr. Morris has been actively litigating in federal court in Brooklyn motions raising the same contentions regarding coronavirus and prison inmates referred to in his letter. And, without commenting on those motions (none of which are before me), I fully agree with Mr. Morris that the combination of Covid-19 and prison conditions poses a serious threat to prisoners. This, as I stated in my article, is because “social distancing is not practical, sanitary conditions are less than ideal, and medical assistance is limited.” And to this I added, “This is made all the worse by the scourge of mass incarceration.”

Mr. Morris’s letter, however, is more of an advocate’s brief than a balanced account. As of today (June 3), three months into the crisis, there has not been a single coronavirus death reported in the two federal jails in New York City (the center of the pandemic), where Mr. Morris practices. (See bop.gov/coronavirus.) And, without discounting the other perils of coronavirus, it is the risk of death that is, and must be, our primary focus.

Keeping this in mind, one can see that Mr. Morris’s statistics are misleading. As I stated in my article, “A few federal prisons have encountered significant numbers of Covid-19 cases, including fatalities, but the great majority have not.” This is still true today. Indeed, as of June 3, out of 121 federal prison facilities reported on the Bureau of Prisons website, 101 have reported no coronavirus deaths whatsoever. Furthermore, out of the 121 facilities, about 12 account for about 95 percent of the coronavirus cases (fatal and otherwise) on which Mr. Morris’s statistics rely. One should note, moreover, that according to Mr. Morris’s own statistics, “the death rate among prisoners is more than 1.3 times as many as among the general population [of the US].” Even assuming this relatively small difference is statistically significant, it hardly suggests that the lives of inmates are being threatened to the degree Mr. Morris proclaims.

Nor would we expect otherwise, for although prison conditions favor the spread of coronavirus, the relatively young age of much of the prison population makes it unlikely that those who contract the virus will suffer life-threatening consequences. Nonetheless, despite Mr. Morris’s claim that “a significant number of judges [are] oblivious” to the dangers inmates face, my colleagues have repeatedly told me that they are acutely aware that, as stated in my article, an erroneous failure to release can have “potentially fatal consequences.” Accordingly, my colleagues and I have not hesitated to release many federal inmates who, because of age and/or underlying health problems, are at very high risk and can otherwise satisfy the fairly strict legal requirements for such release. And the Bureau of Prisons, which has greater discretion in these matters, has released over three thousand such prisoners.

Most of my article was not, however, about prisoner release. The main point of my article was simply to note that, because of almost two decades of advance planning, the federal courts in New York have been able to remain open for business throughout the pandemic. A better argument Mr. Morris might have made, I respectfully suggest, is that the Bureau of Prisons appears to have done much less in the way of advance planning, thereby creating risks that might have been avoided. And while Mr. Morris views the pride I continue to take in my colleagues’ great work in keeping the federal courts running as simply a “self-congratulatory account,” it is because of those efforts that advocates like Mr. Morris are having their motions for inmate release promptly heard and decided. 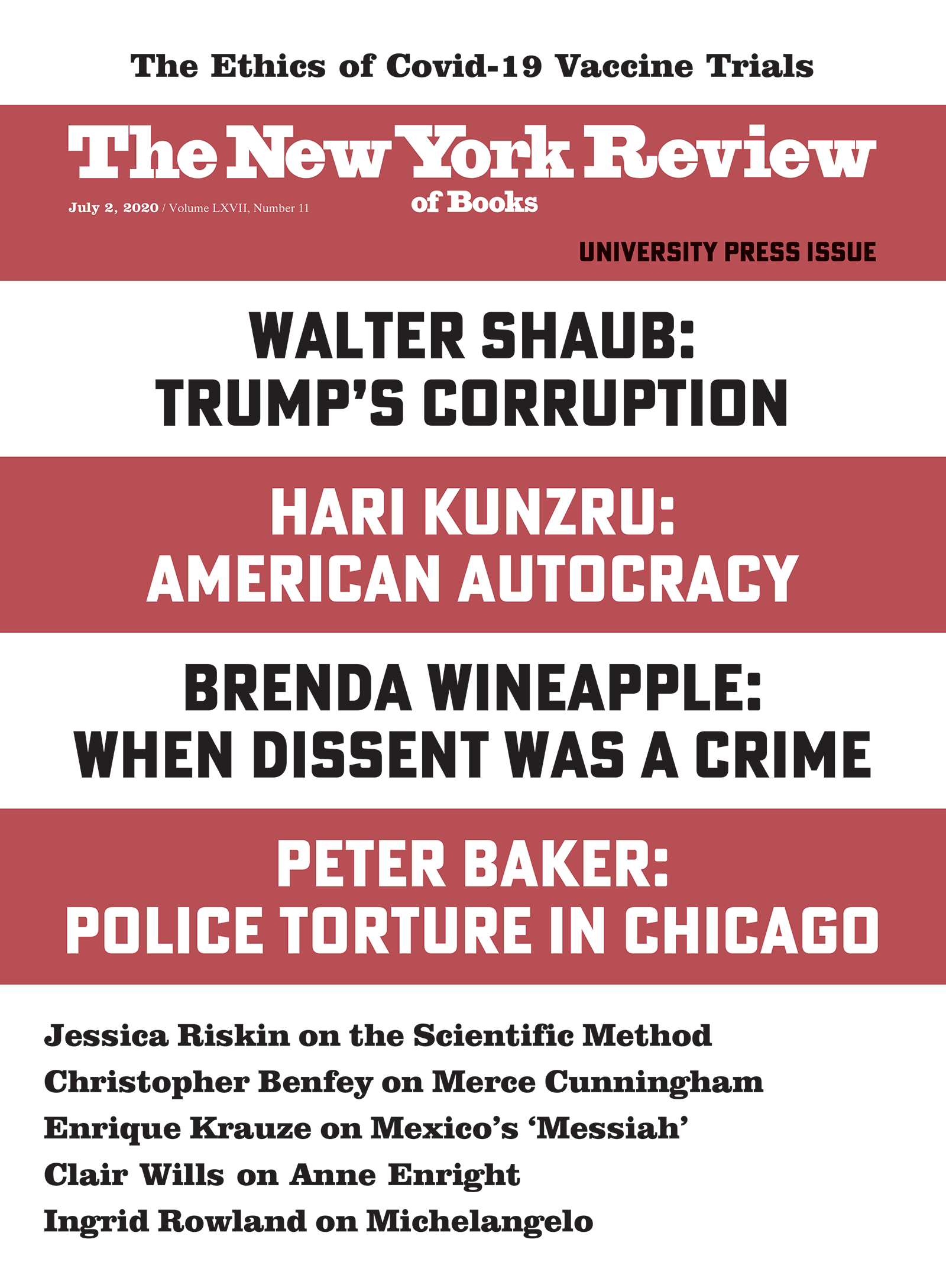 In Love with the Judge

Our Awful Prisons: How They Can Be Changed

President Trump is attempting to turn “law and order versus anarchy” into an election issue that will distract voters from the White House’s incompetence.