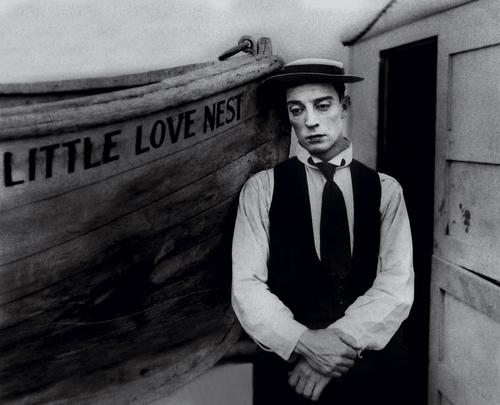 I have a collection of Buster Keaton’s films I bought in the late 1980s when they first became available on video. It’s made up of nineteen half-hour shorts and his nine full-length films, all made between 1920 and 1928. Every few years I take a look at some of them, and recently, being thoroughly depressed by our wars and our politics, I watched a dozen of his shorts to cheer myself up. Almost ninety years old, these shorts are still very funny and visually beautiful. They make the Dada and Surrealist pranks everybody was scandalized by in that era seem dated and tame in comparison.

Charlie Chaplin’s bum is at the mercy of a cruel world. Keaton, with his impassive face and a hat flat as a pancake, is a stoic. He confronts one setback after another with serenity worthy of a Buddhist monk. In one short film, “The Goat” (1921) he’s standing on the sidewalk behind two tailor’s dummies, under the impression that they are at the end of a bread line. When he discovers his mistake, he moves on quietly.

Keaton’s movies were a big success in Europe since his type of comedy doesn’t need a translation. I first saw one of his shorts in occupied Belgrade during the Second World War. I liked him instantly. His films are full of remarkable acrobatic stunts. Keaton started out in vaudeville when he was four years old working with his parents, whose comedy act included a lot of roughhousing; he was thrown by his father across the stage and sometimes even at the hecklers in the audience.

A plot of a good comedy can be written on a postcard, Keaton said. For instance, in “Cops” (1922) a girl tells the hero, either you become a successful businessman, or I won’t marry you. Everything that happens in this delightful short follows from his effort to fulfill her request.

Keaton claimed that it was much harder to make a short comic film than a full-length one in which the story is uppermost, since a short film is nothing but a series of gags that follow from the original premise. For the gags to work, they have to be timed just right. Even after a film was completed, he reshot some gags if he felt they were executed either too quickly or too slowly—and many of them, of course, were extremely difficult to do. In “Neighbors” (1921), when a young woman cries for help from a third-floor apartment across the street, Keaton and two other men each step out of their three respective windows to form a human totem pole and rush to her rescue.

At the same time, he warned against the dangers of rehearsing a comic scene too much. To be successful, a scene had to keep its feel of improvisation. In “One Week” (1920), an uncle gives to a pair of newlyweds a build-it-yourself house and a plot of land. A disappointed rival alters the numbers in the boxes containing the house, so that when Keaton begins to assemble it, the result is freakish. A door on the second floor opens to nowhere; the kitchen sink is on the outside wall; the rain pours through an opening in the roof and the house spins in the high wind. An obstinate and ingenious man, he tries to cope with whatever new difficulties present themselves.

In another short, “The Scarecrow,” a couple are eloping on a motorcycle with a side car, pursued by the girl’s father, when in their speed they sweep up a priest who happens to be crossing the street. “Where is the ring?” the priest asks. Using a nut Keaton has just unscrewed, the priest pronounces them man and wife.

In the world in which everything can go wrong, and usually does, Keaton remains unperturbed. In “The Boat” (1921), after the boat he built in his garage sinks, he and his wife and two kids are set adrift on the sea in a bathtub he brought along to serve as a lifeboat. One of the little ones cries for a drink of water, and Keaton, without any sign of anxiety, pours him a glass from the tap, which the kid drinks as they sink. As the old stoic philosophers said, the sage is immune to misfortune. Since most of us are not sages, we can at least laugh.