With the opening of an exhibition of nine important old master paintings from Dulwich Picture Gallery at the Frick Gallery this month, New Yorkers are at most a mere cab ride away from seeing major yet relatively little-known paintings by van Dyck and Poussin, Rembrandt, Murillo, Watteau, and Gainsborough. Even if you think you know these artists well, go anyway: these pictures rarely travel and many are atypical of the artist’s work.

The Canaletto, for example, is not the usual view of Venice but one of a relatively small number of pictures painted during his English period. It shows the wooden arches of Old Walton Bridge over the Thames (c. 1754) on a thundery summer afternoon only moments before a cloudburst will drench the tiny figures animating the foreground. Similarly, most of us think of Peter Lely as a portrait painter; but in his early Nymphs by a Fountain (c. 1650), included here, his brush describes bare flesh so sensuously that you can see at once why Restoration wantons like Barbara Villiers or Louise de Keroualle wanted to be painted by him. And Bartolomé Esteban Murillo’s The Flower Girl—Spring (c. 1668–70) is neither portraiture nor still life nor genre painting, but a combination of all three. The little street girl is painted life-size and with the surface brilliance usually reserved for portraits of noblewomen. Presented to us without sentimentality, her appeal is to the eyes and not—as so often with Murillo’s urchins—to the heartstrings.

What’s been sent to the Frick is only an amuse-bouche to encourage Americans to visit the historic collection at Dulwich the next time they are in London. As at the Frick, the collection isn’t huge and it is displayed in a building that’s human in scale, so getting to know the collections in depth is much easier than it is at lumbering giants like the Met or National Gallery. And as the present show demonstrates, a small exhibition can be every bit as lively and often more rewarding than a blockbuster. The pictures in this show were clearly chosen not only to resonate with the Frick’s holdings, but to supplement them. For instance, the Frick has two wonderful full-length Gainsboroughs, neither of which is as fresh or as intimate as Dulwich’s full-length double portrait of Elizabeth and Mary Linley—the Linely Sisters (1771–72). Believe it or not, there is no Poussin at the Frick and its only Watteau, The Portal at Valenciennes (1709–10), isn’t a fête galante like Les Plaisirs du bal (c 1717) from London. And although the Frick has eight van Dycks they are all portraits, whereas Dulwich has lent a magnificent early subject picture, Samson and Delilah (c 1618–20).

The story of how the Dulwich collection came to be formed is almost as remarkable as the pictures in it. In 1790 the Polish King Stanislaw Augustus commissioned the French art dealer Noël Desenfans and his Swiss business partner Sir Francis Bourgeois to put together a collection of pictures he would purchase en bloc to form the nucleus of the National Collection of Poland. Five years later, their work was finished. But before they could deliver the pictures, international politics intervened to kill the sale. When the country formerly known as Poland was partitioned by Russia, Austria and Prussia, Stanislaw Augustus abdicated, leaving the art dealers with stock they couldn’t readily shift in a market already flooded with paintings displaced by the French Revolution. As a result, the collection not only remained more or less intact, but by selling several of the smaller works, they were able to make further important acquisitions.

When Bourgeois died in 1811, he left his pictures to Dulwich College, nowadays among the most prestigious day schools for boys in London. He chose Dulwich because it already possessed a small (and distinctly doubtful) picture collection and also because of its location in a leafy village far from the polluted air of central London. To build his gallery, he named the architect Sir John Soane, who came up with a design so innovative that his building is studied by architects even today as a model of how to create ideal viewing conditions for displaying pictures, which are illuminated indirectly with natural light provided by skylights. Any visit to the gallery includes an obligatory peek into the lugubrious mausoleum opposite the entrance where Bourgeois and Desenfans lie side by side in eternal rest, proving that even if you can’t take your art collection with you, at least you don’t have to leave it too far behind. 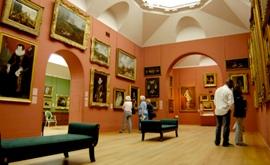 Dulwich Picture Gallery is England’s first purpose-built public art gallery and so well worth taking in that it attracted 140,000 visitors last year. Though only four miles from central London, anyone who lives North of the River Thames will tell you that getting there can be an adventure—and not in a good way. For Dulwich Village is in the vast no man’s land across the Thames known as South London. A glance at an A-Z street map shows that the underground system hardly extends into this part of the city. Though it can be reached either by car or by public transportation, your best bet is to take one of the trains to Dulwich Village that run frequently from Victoria station, with a fifteen minute walk to the gallery at the other end. It used to be possible to drive, but nowadays if you took your car you’d be letting yourself in for a nightmare experience.

Even when motorists pay the hated congestion charge (which has now been raised from £8 to £10 by the new mayor, Boris Johnson), they still sit for hours in traffic queues caused by never ending road works—a situation exacerbated by the urgent need to replace the Victorian pipes that supply Londoners with their water. For months at a time, major roads are closed arbitrarily. And with no central office to coordinate the work, London’s traffic has descended into chaos. For example, it was recently announced that no fewer than five bridges over the Thames are to be closed to traffic, some for up to a year, which means that soon the whole of South London will be cut off from the rest of the city. It may be an exaggeration to say that these treasures of the Dulwich Picture Gallery will be more accessible to us on East 70th Street than they are when the pictures are hanging back home, but with a mayor as useless as Boris Johnson, you New Yorkers don’t know how lucky you are.

Richard Dorment was the art critic for the Daily Telegraph between 1986 and 2015.