I entered Harvard in the fall of 1947. Within a year I started to know members of the physics department. By the time I left Cambridge ten years later I knew them all. A number of them had been at Los Alamos during the war and had essential parts in building the bomb. Norman Ramsey, from whom I took a course in modern physics, had helped assemble “Fat Man,” the plutonium bomb that flattened Nagasaki. Kenneth Bainbridge, probably the last person to touch the plutonium implosion bomb that was tested at Alamogordo in 1945, was department chairman during my last years. Another faculty member, Roy Glauber, who was a little closer to my age, was the second youngest person to be a member of the technical staff. But none of them ever said anything about Los Alamos, at least not to me.

I have often wondered why. It was of course not long after the war and the bombing of Hiroshima and Nagasaki. There was still a great aura of secrecy about the bomb. They probably had mixed feelings, which included the fact that while they were at Los Alamos they had had a very good time. They worked night and day but Robert Oppenheimer made sure that they had fun. There were great parties and lots of their wives became pregnant. They were all so young. If you were thirty in that group you were getting on. My guess is that once the weapons were used on Japan they woke up and realized that it had been a nightmare and did not want to talk about it. 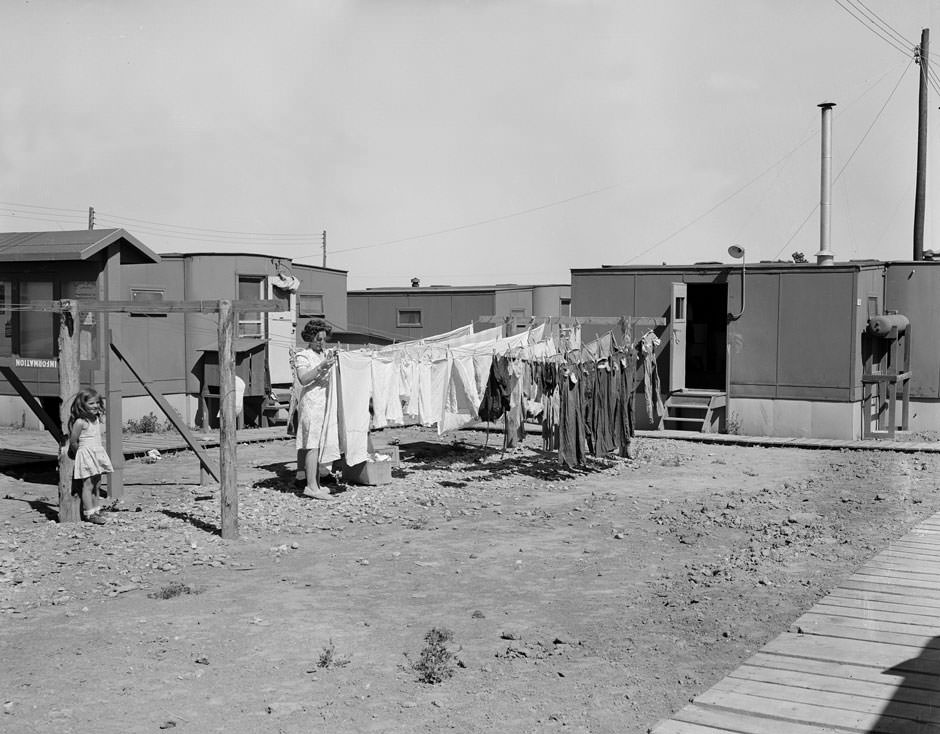 Los Alamos housing for married couples, circa 1945; the elite lived on what was and is called Bathtub Row, which was so called because the houses had bathtubs 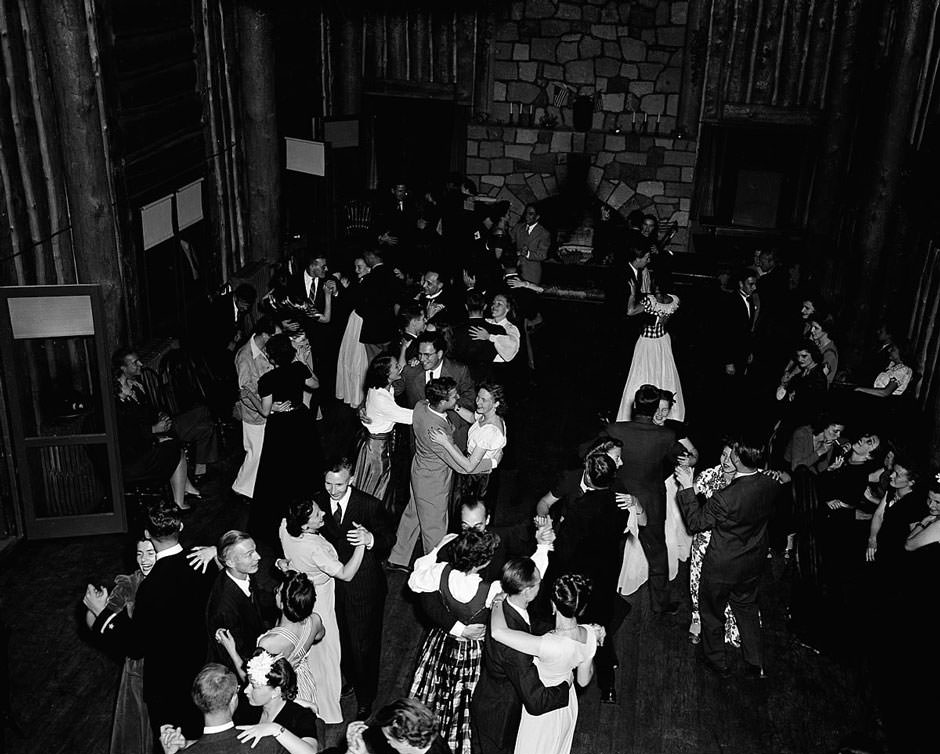 Los Alamos British Mission party in the Fuller Lodge, circa 1945 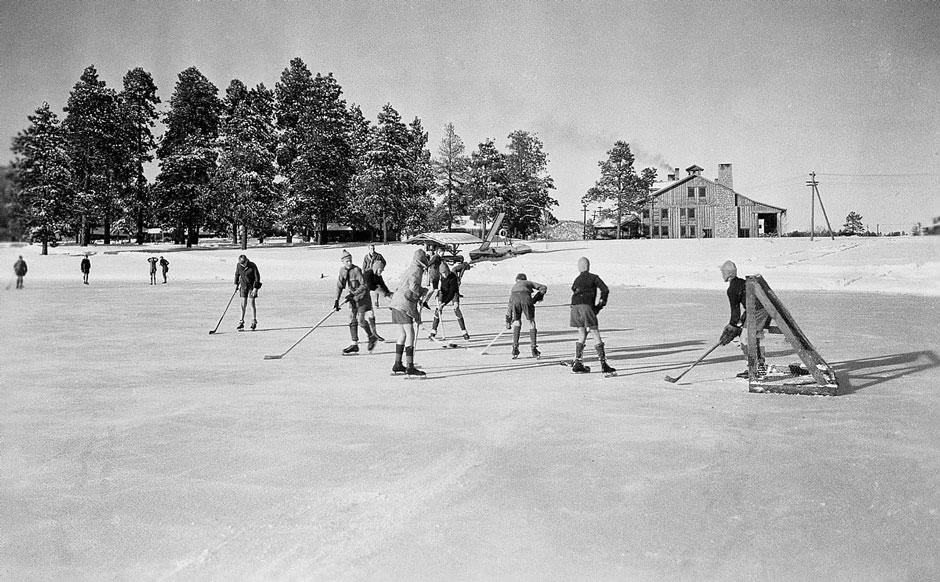 Los Alamos Ranch School students playing hockey on Ashley Pond, 1940; the school, whose students included William S. Burroughs and Gore Vidal, was purchased by the government in 1942 and its campus subsequently used as the site for the Los Alamos National Laboratory 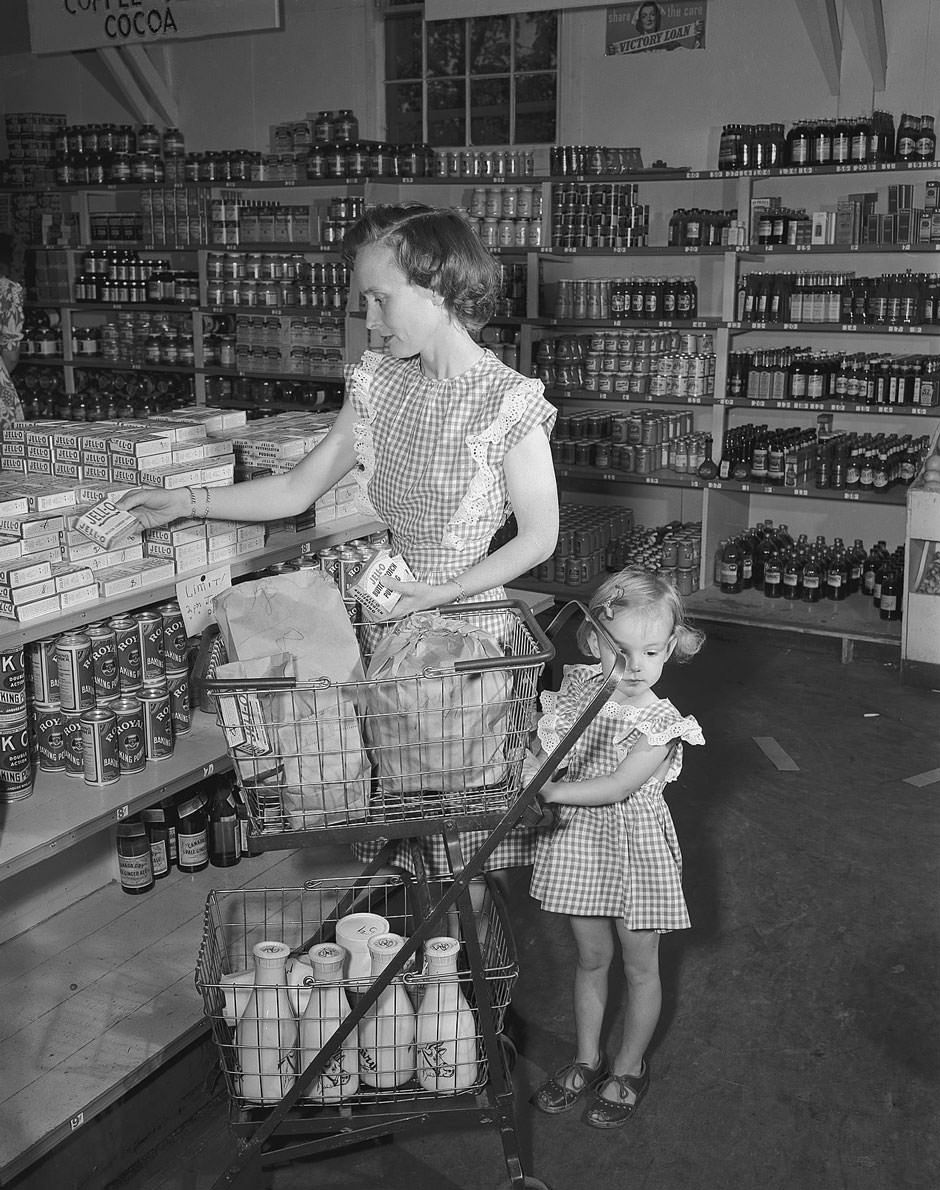 A mother and her daughter shopping in Los Alamos, circa 1943 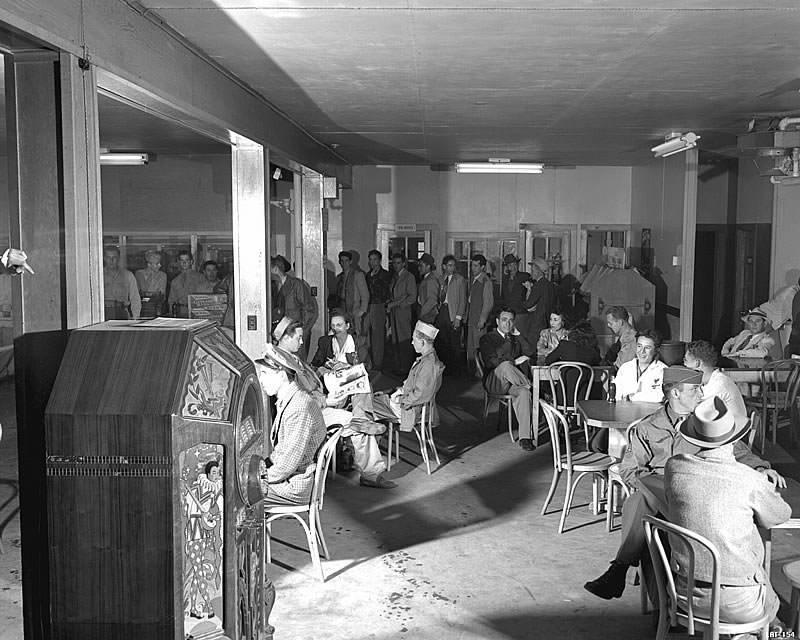 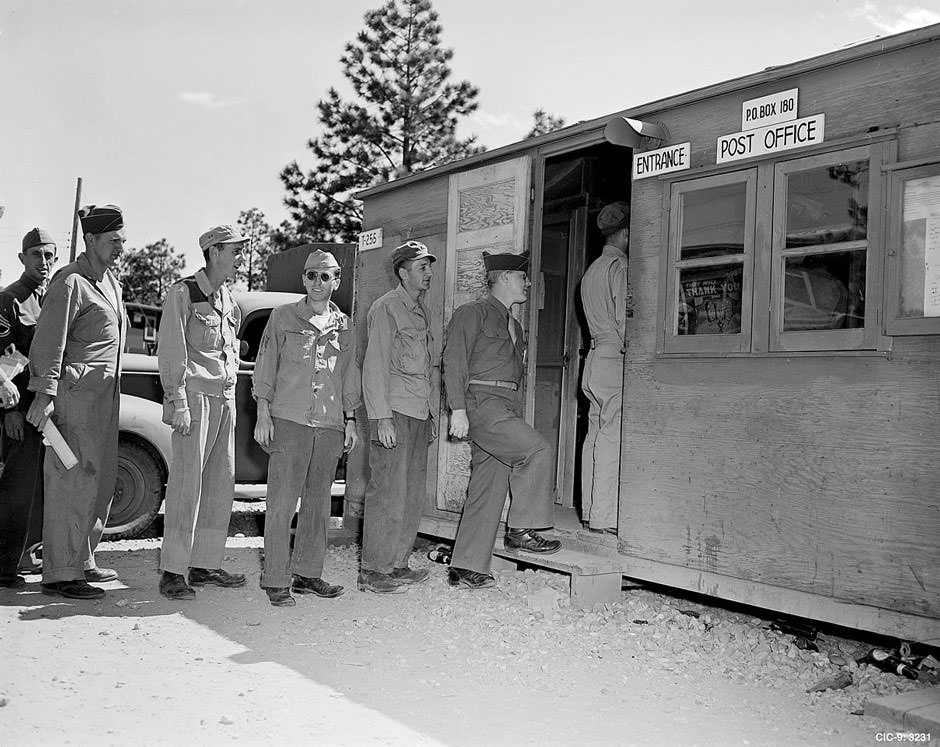 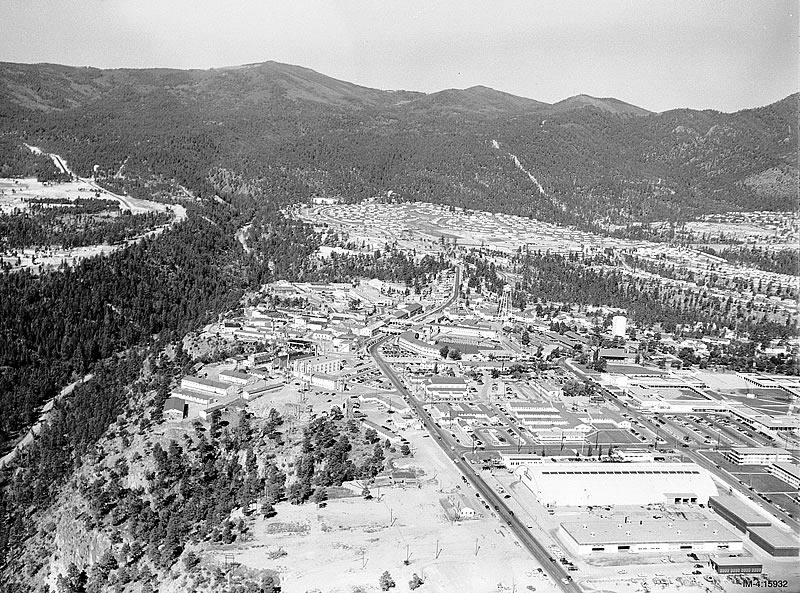 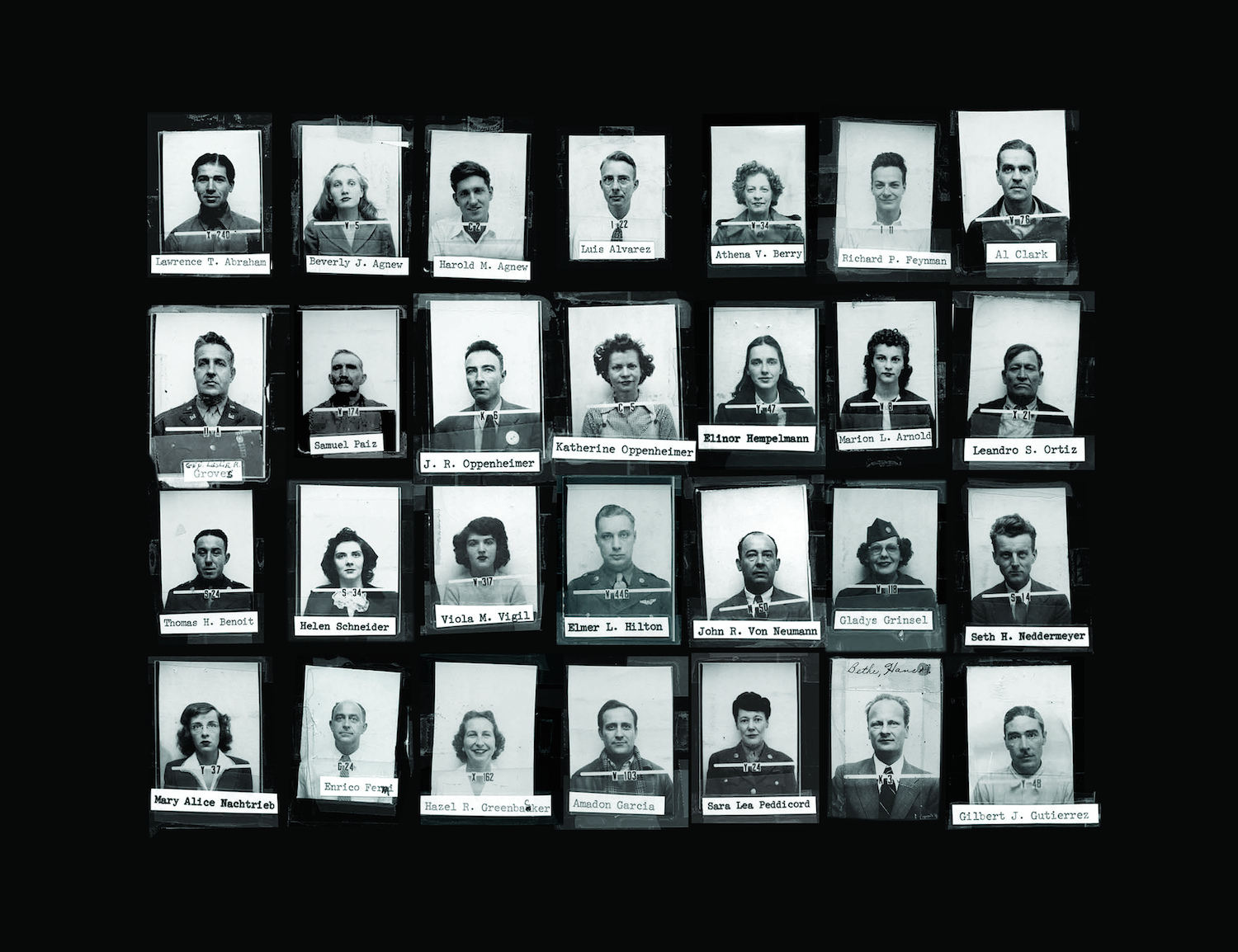 A mosaic of Los Alamos ID badges, including J. Robert Oppenheimer and Richard Feynman, circa 1943

I was reminded of this while looking through recently declassified photos that the Los Alamos National Laboratory has been posting online. Most of the people in these photos—a few of whom I recognize—are now dead. But in the photos they are just kids.

One of the youngest in this young group was Theodore Hall, who went by Ted. He appears in one of the laboratory’s declassified photos, a copy of his badge photo in which he stares off, sleepy or perhaps displeased (his name is taped below, mistyped, and he had just arrived after an arduous cross-country train trip).

Hall was only eighteen years old when he arrived at Los Alamos. He had known Glauber at Harvard and indeed they had roomed together and arrived at Los Alamos together. Hall began to work on the process of implosion, central to creation of the “Fat Man” bomb. To create a nuclear explosion, a small amount of plutonium would be surrounded by a metal shell, which would itself be surrounded by explosives. When these explosives were set off, the force of the blast was directed toward the center of the sphere, compressing the plutonium. At the same time, a neutron initiator, made of beryllium and polonium, would initiate a chain reaction in the plutonium, setting off the atomic explosion.

What no one suspected, including his friend Glauber, was that Hall was a Russian spy. He had volunteered his services, believing that America would turn to fascism if it had access to nuclear weapons. He delivered the earliest news of the activities at Los Alamos to the Russians, first trying to contact Soviet officials through the Communist Party, and then sending messages from Los Alamos through his former college roommate Saville Sax, whose mother, a member of a Communist front organization, had years ago introduced him to Soviet agents.

Hall was not the only spy working at Los Alamos in those years; in fact two of his colleagues were also secretly passing along information to the Soviets. They were David Greenglass, a machinist and brother of Ethel Rosenberg, and, more importantly, Klaus Fuchs, a German-born theoretical physicist who gave the Russians detailed description of the plutonium bomb, including a sketch. These disclosures are thought to have saved the Russians years in development and research.

Some spies were eventually found out, like Fuchs, who served nine years in prison. But although Hall was questioned, he was not charged. The full scope of his spying and the Russian involvement in Los Alamos were only disclosed many years later in 1995, when the American counter-spying initiative, the Venona project, became declassified. By that time, Hall had moved to England, where he worked at the University of Cambridge and died in 1999.

None of my friends were aware that anything was amiss among their colleagues at the time. Fuchs, for example, was a popular figure. His arrest and confession occurred at the time—1950—when I was getting to know my Harvard professors. They were deeply shocked, and this, I suppose, may have been one of the reasons why they did not discuss Los Alamos with people like me.

Okinawa: Why They Chose Death

Would the Japanese have surrendered without Hiroshima? For decades the question has lingered, as historians have challenged one of the most important American rationales for dropping the bomb.

Oppenheimer: The Shape of Genius

Ray Monk’s ‘Robert Oppenheimer: A Life Inside the Center’

In the New World of Spies

Russian spies, past, present, and future