Only twice in modern times have museums surveyed the career of a single Greek vase painter, and both shows were at major international institutions (the Metropolitan Museum of Art in 1985 and Berlin’s Staatliche Museum in 1990-1991). Thus it is a marvel that the more modest Princeton University Art Museum has assembled a vast selection of the works of the master referred to as the Berlin Painter, who lived in Athens in the early fifth century BC. Curated by J. Michael Padgett, the show charts the development, over some four decades, of an artist whose name, nationality, and even gender remain unknown, but whose distinctive and confident illustration in the red-figure style stands out as clearly as any signature.

In his pioneering research on attic vase painting, the Oxford art historian Sir John Beazley devised the label “Berlin Painter” in 1911 in honor of a large lidded amphora decorated by this artist that is housed in Berlin’s Antikensammlung. He assigned thirty-seven other works to the same artist on the basis of the unique line they shared, which he described as “thin, equable, and flowing,” and various features of the depiction of the human form. By now several hundred vases have been attributed, more or less confidently, to this artist’s hand, many recovered from the graves of wealthy Etruscans in western Italy. More than fifty can be seen in the Princeton show, along with pots by the equally talented Kleophrades Painter—who, because of the similarity of their styles, is thought to have been the Berlin painter’s teacher—and by other, later artists who clearly took their inspiration from these two masters.

The Berlin Painter began working at the end of the sixth century BC, when the red-figure technique of vase painting—in which black glaze fills the background, leaving silhouettes of unglazed red ceramic to form the image—was just starting to replace its inverse, the black-figure style that had prevailed earlier. The possibilities offered by this new medium clearly intrigued the artist, who began to expand the black background and diminish the red subject to a single, static figure—a lyre-playing singer with his head thrown back in musical ecstasy, a young athlete holding a discus. These figures seem to float, anchored to the physical world only by the short geometric band on which they plant their feet. In some cases, even this tiny hint of landscape disappears.

The first phase of the Berlin Painter’s career coincided with the birth of democracy in Athens, and the early works—which portray ordinary people caught in simple moments of daily life in much the same way that other vase painters treated gods and heroes—demonstrate the humanism of that political evolution. The vitality that the Berlin Painter gave to these portraits attests to the new social consciousness emerging in Athens that would soon culminate in the great drama, history, and political works of the later fifth century. 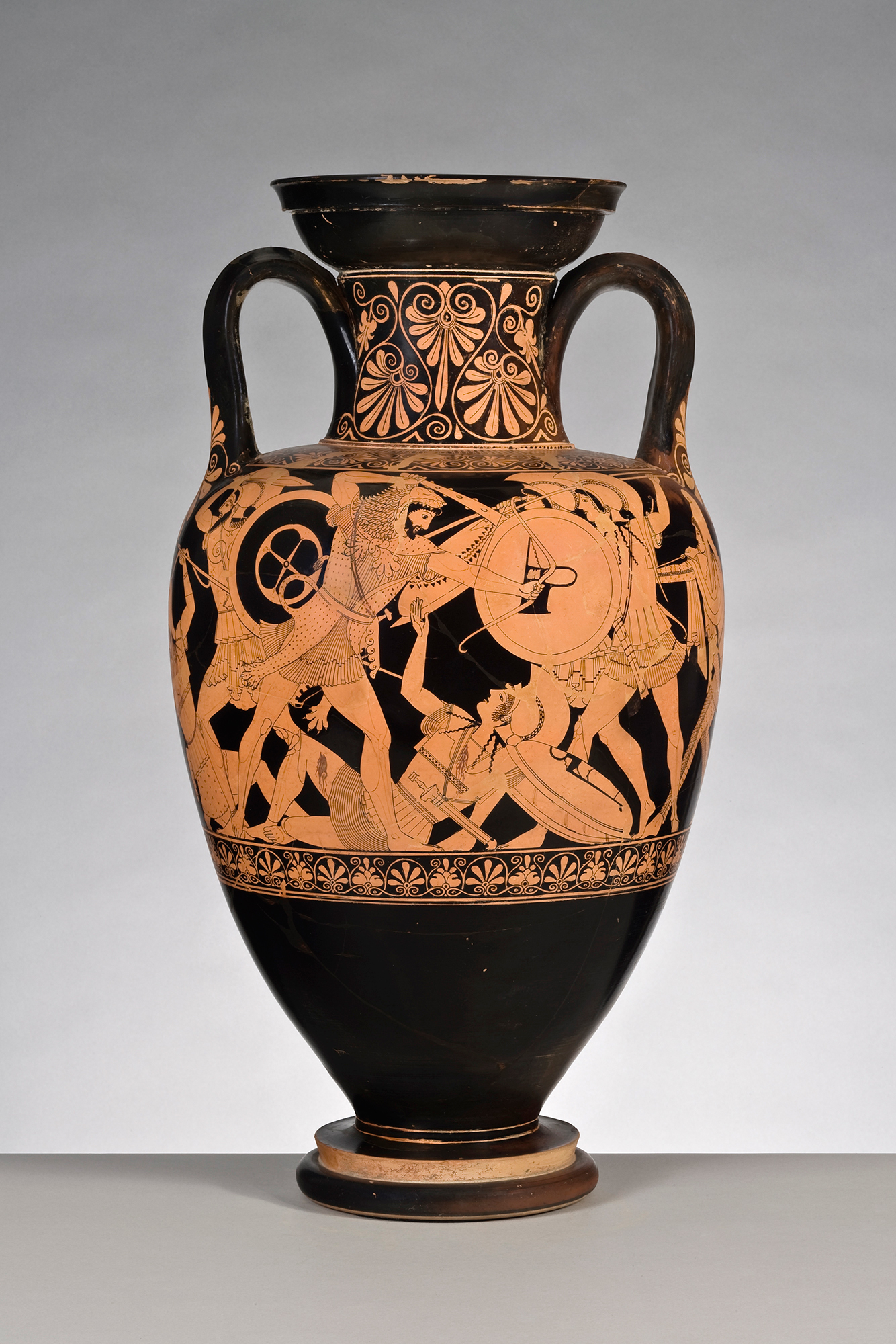 Red-figure neck-amphora with ridged handles showing a battle between two Greeks and ten Amazons, attributed to the Berlin Painter, circa 485-480 BC 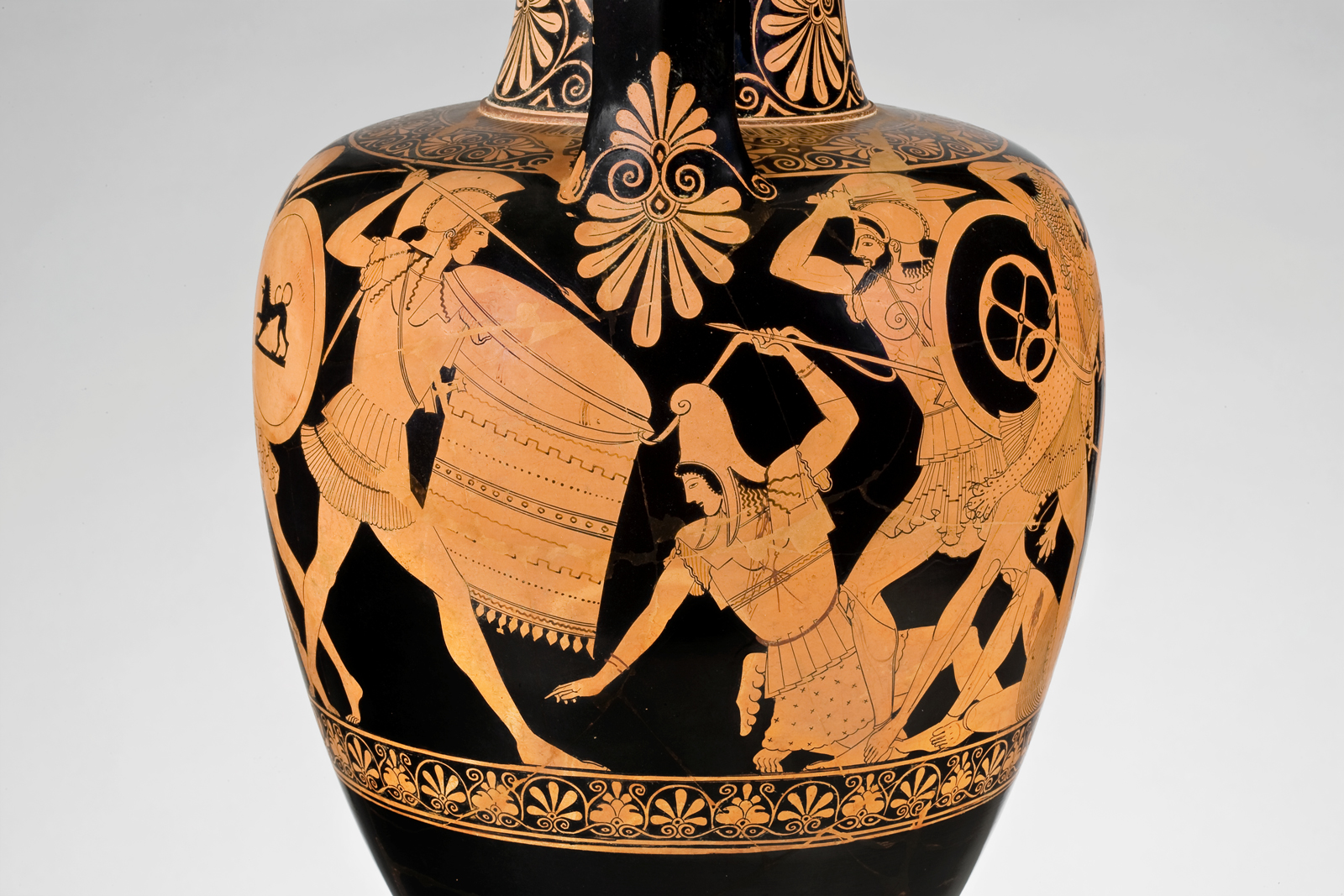 Detail from the reverse side of red-figure neck-amphora showing a battle between two Greeks and ten Amazons, attributed to the Berlin Painter, circa 485-480 BC 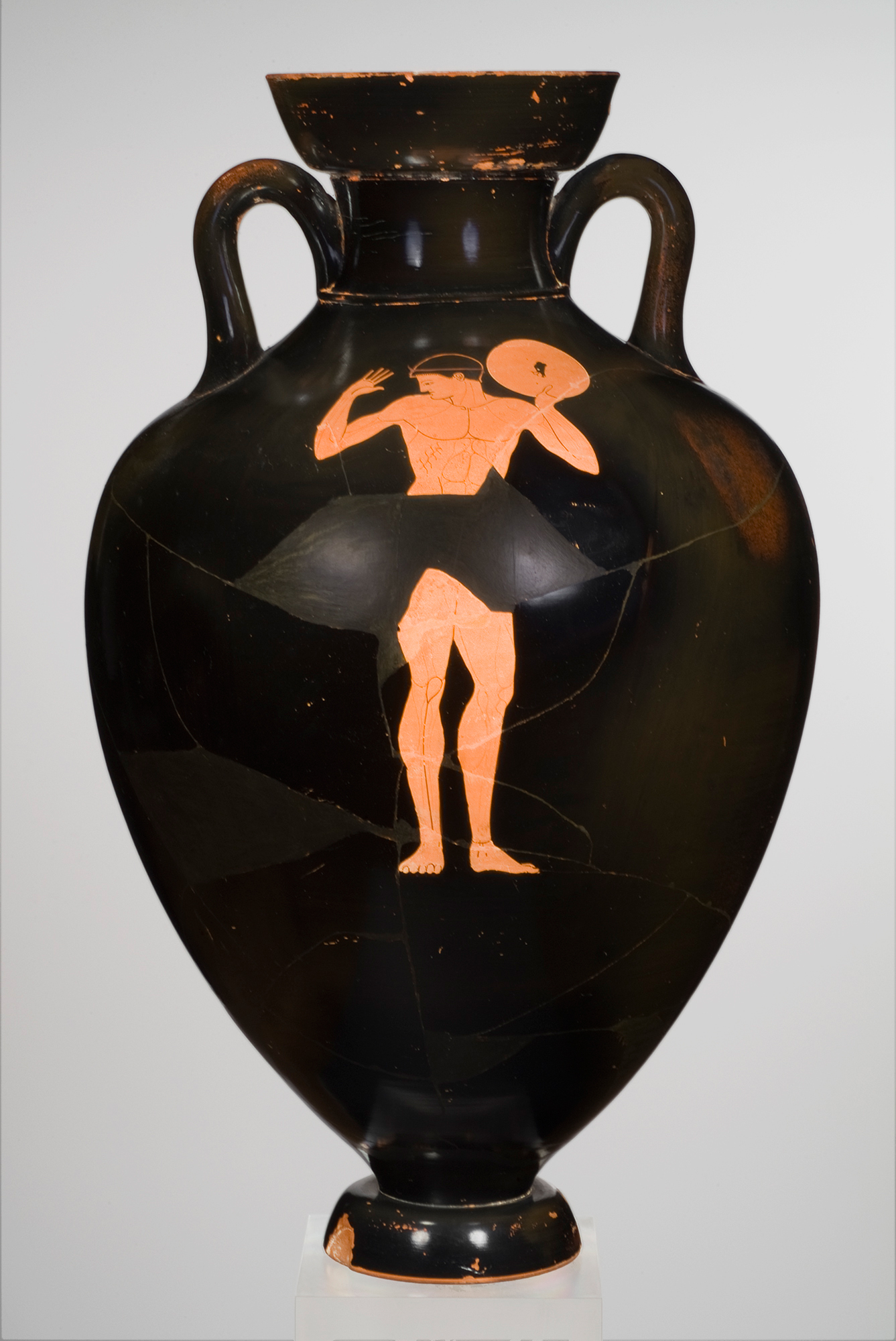 Red-figure amphora of Panathenaic shape showing a discus thrower, attributed to the Berlin Painter, circa 500-495 BC 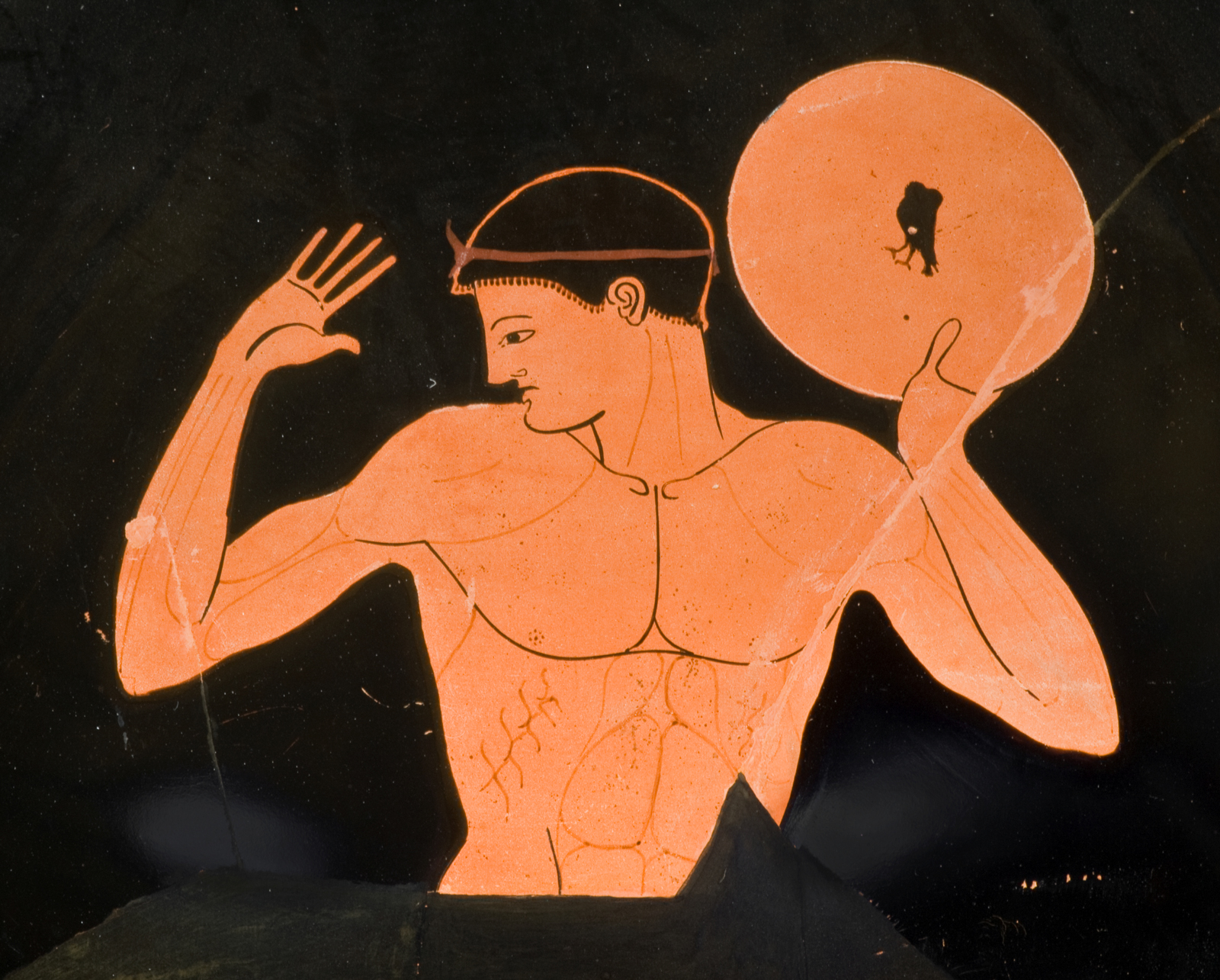 Detail from red-figure amphora showing a discus thrower, attributed to the Berlin Painter, circa 500-495 BC 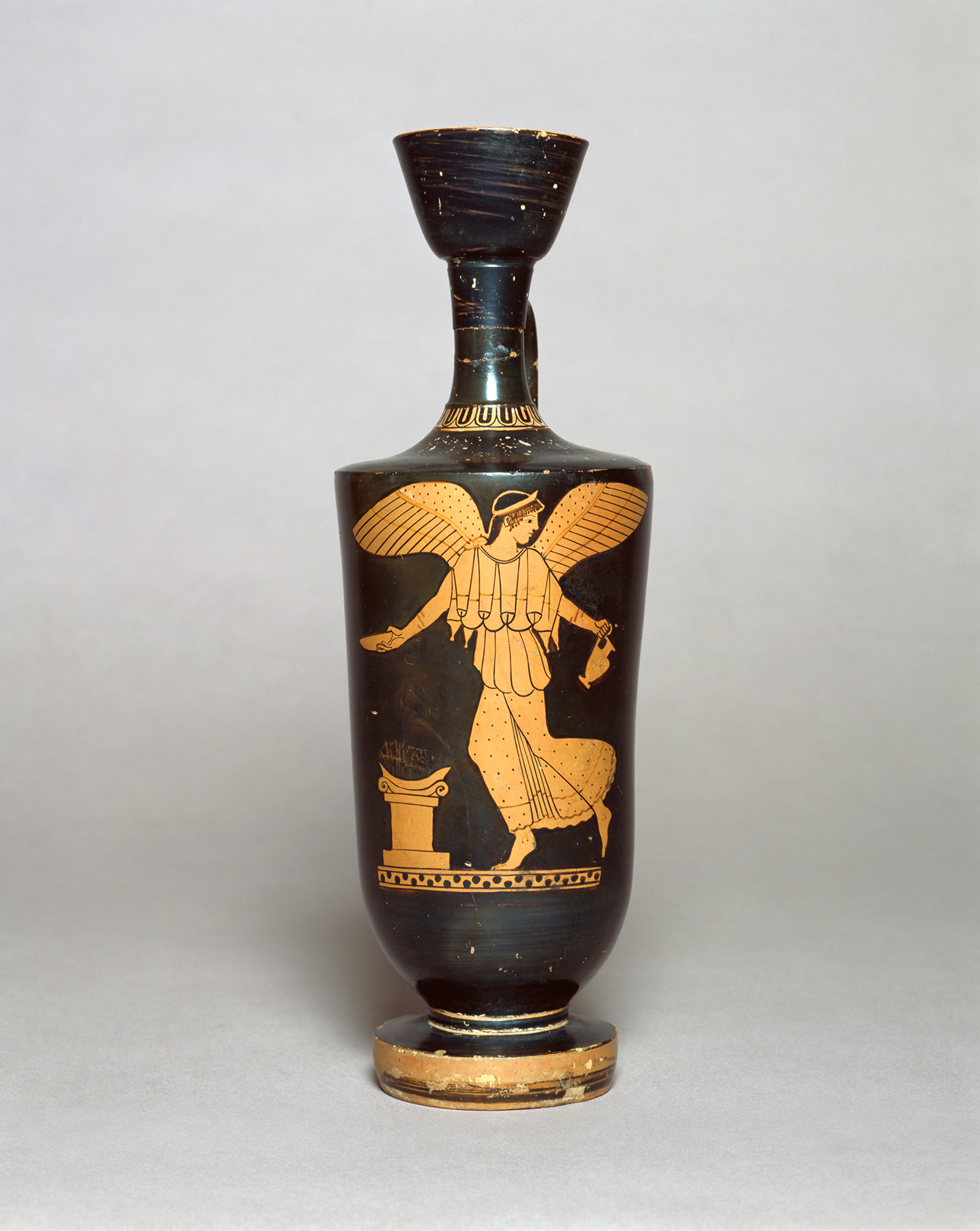 Lekythos (oil flask) showing Nike pouring a libation at an altar, attributed to the Berlin Painter, circa 490 BC 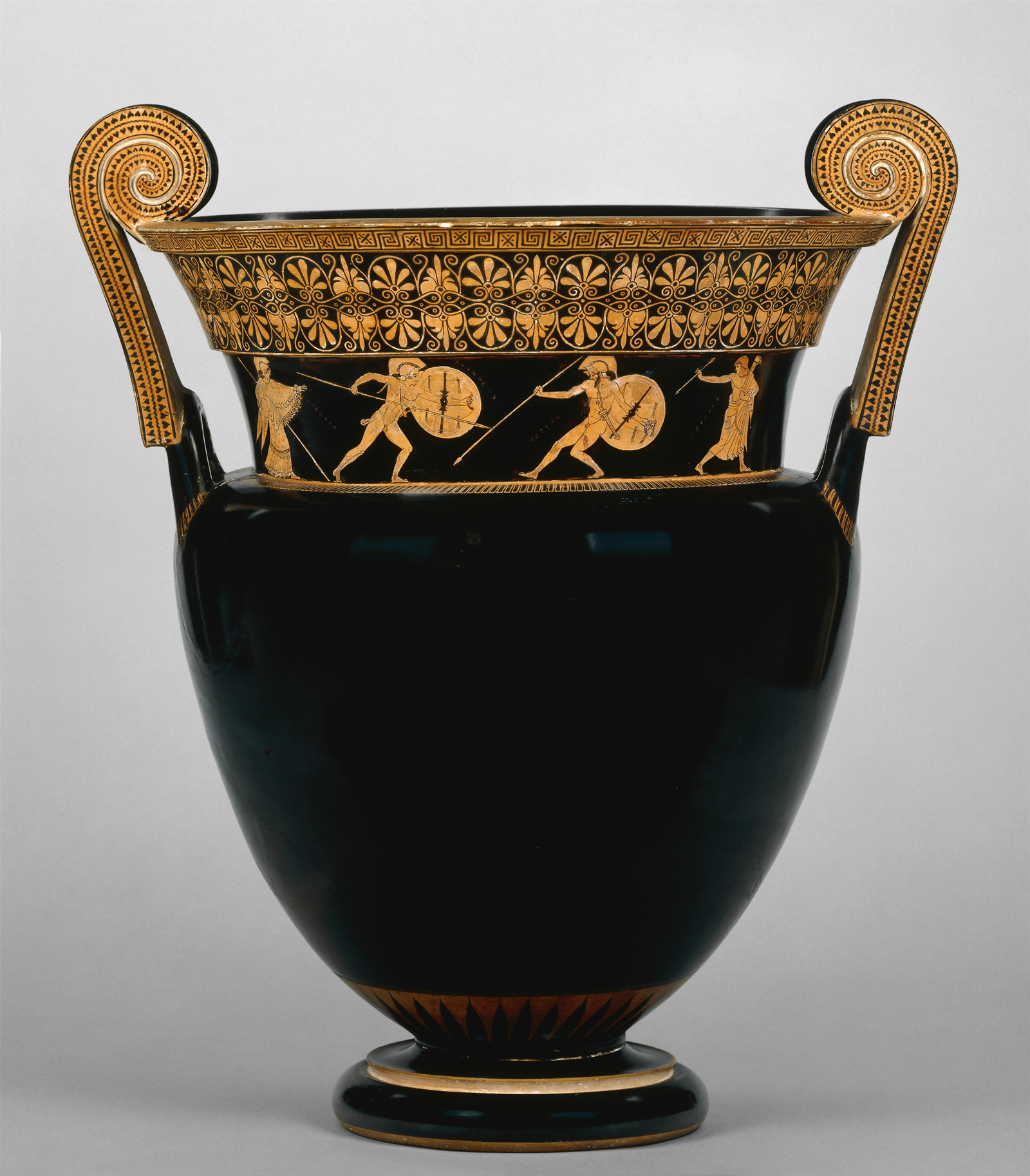 Red-figure volute-krater showing Achilles and Hektor flanked by Athena and Apollo, attributed to the Berlin Painter, circa 490 BC 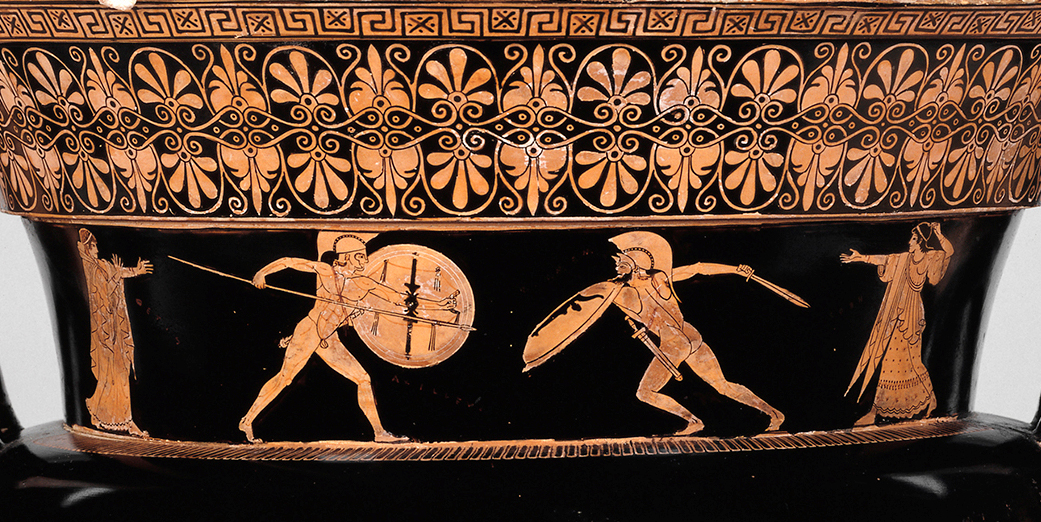 Detail from the reverse side of red-figure volute-krater showing Achilles and Memnon flanked by Thetis and Eos, attributed to the Berlin Painter, circa 490 BC 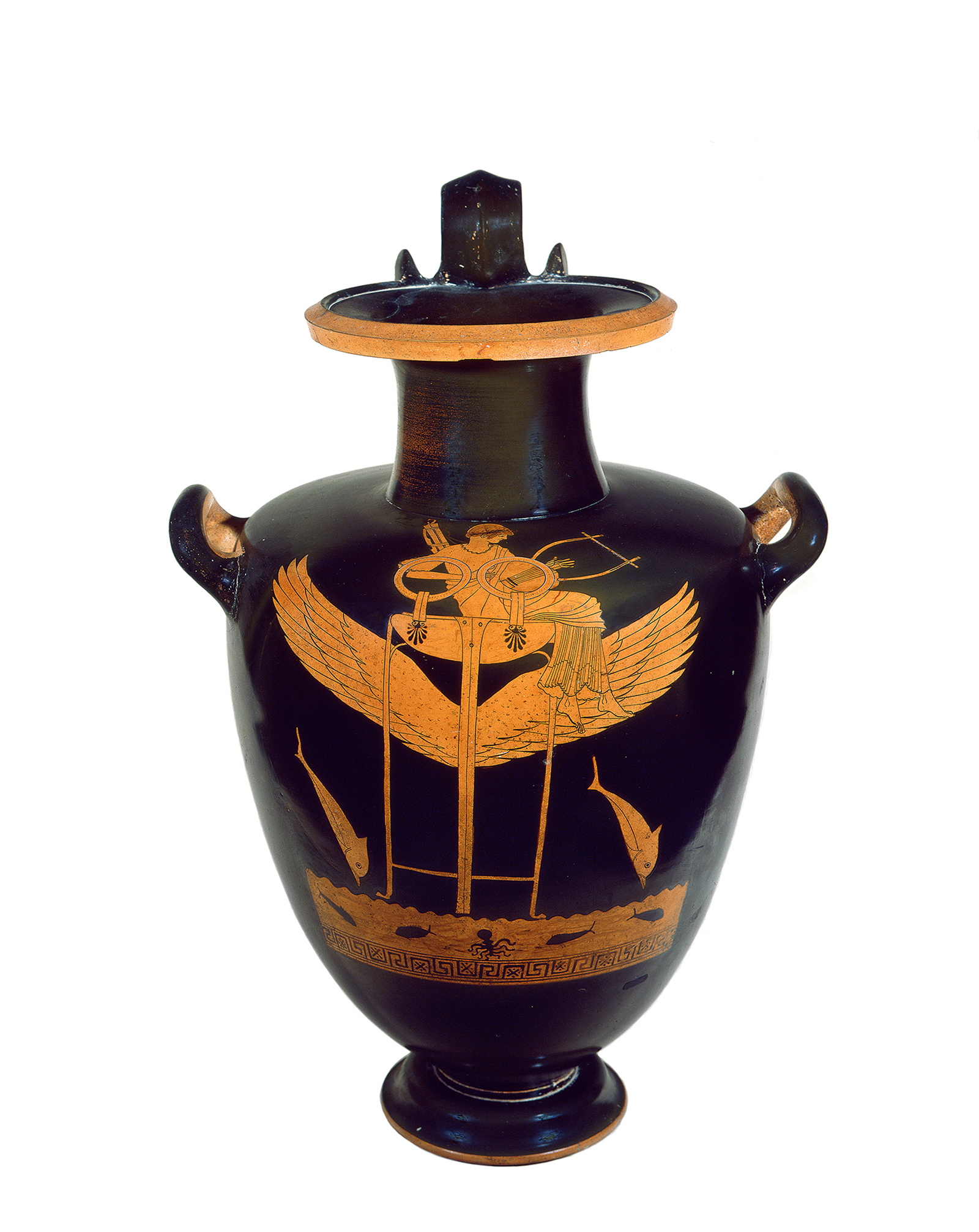 Red-figure hydria of black-figure shape showing Apollo seated on a winged tripod, attributed to the Berlin Painter, circa 500–490 BC 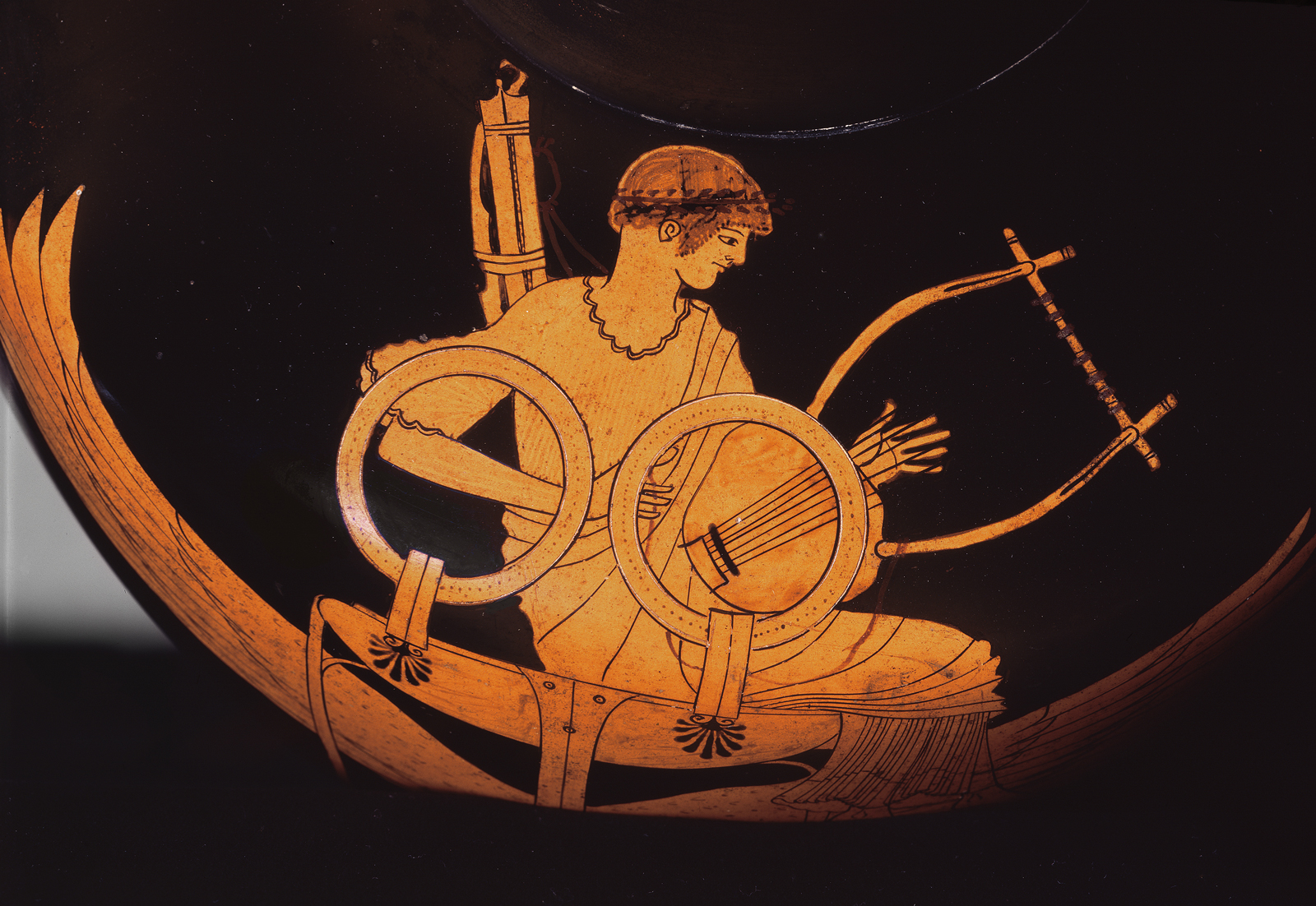 Detail from red-figure hydria showing Apollo seated on a winged tripod, attributed to the Berlin Painter, circa 500–490 BC 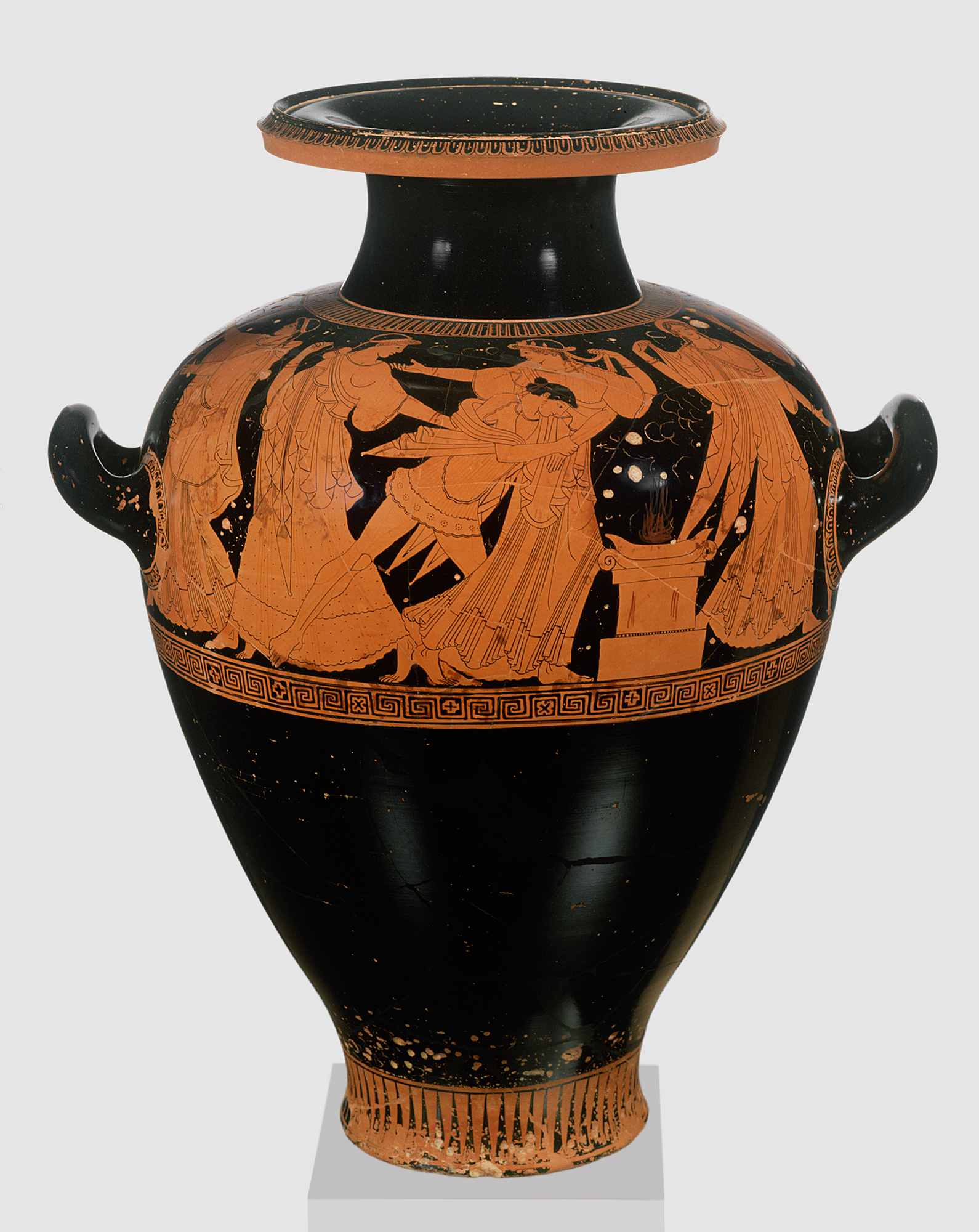 Red-figure stamnos showing the sea goddess Thetis captured by Peleus with fleeing Nereids, attributed to the Berlin Painter, circa 480-470 BC 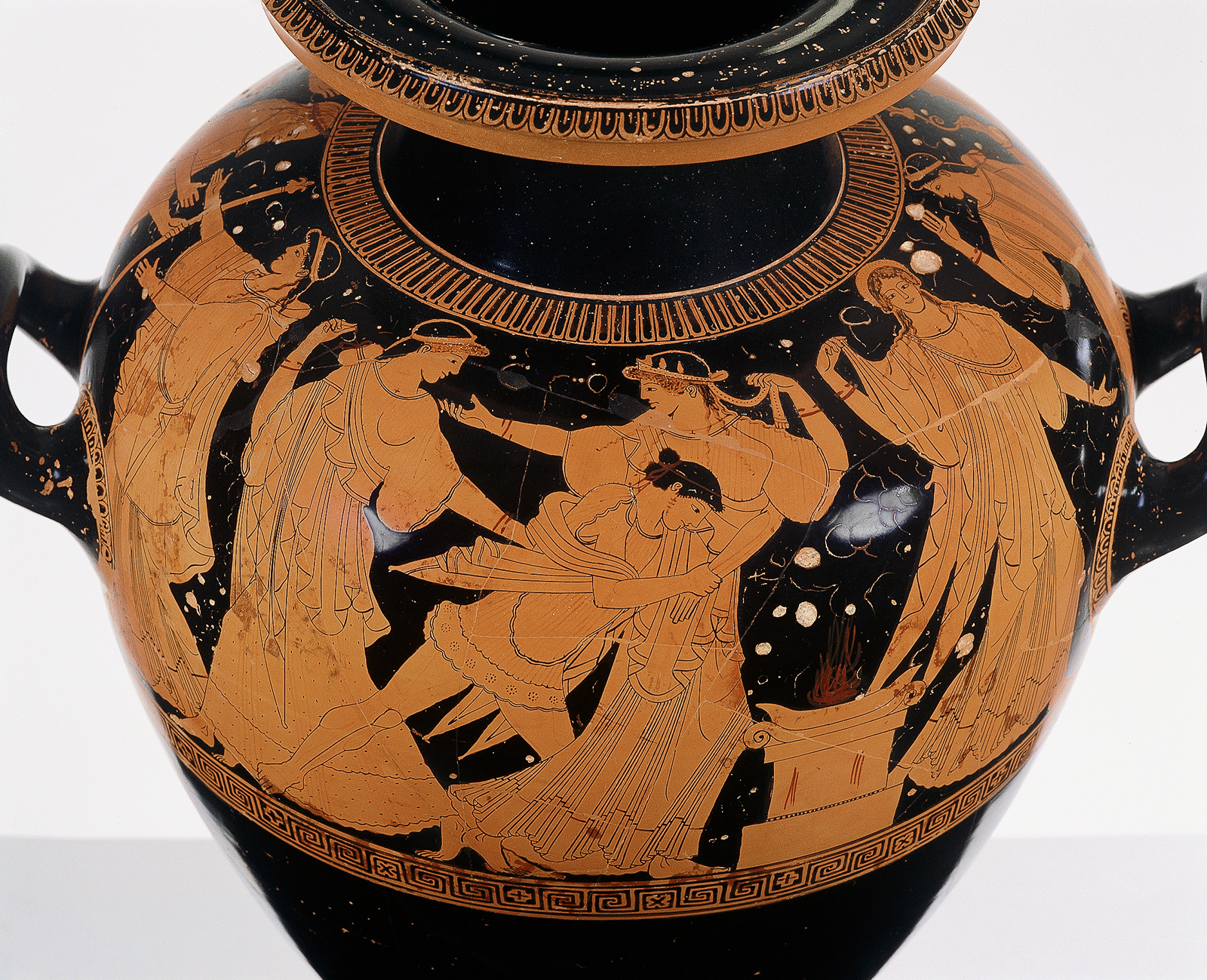 Detail from red-figure stamnos showing the sea goddess Thetis captured by Peleus with fleeing Nereids, attributed to the Berlin Painter, circa 480-470 BC

In the later works, the Berlin Painter tried more crowded and kinetic scenes, divine processions and mythic combats. The results are disappointing compared with these earlier works. One of the fascinations of the Princeton show is that it illustrates the arc of his (or her) career, from youthful exuberance and innovation to a less confident, more conventional mature phase. Even as his early work attracted imitators and rivals, the Berlin Painter moved toward more traditional subjects and developed a clumsier, less graceful line. This shift fits in with a general decline in painting standards during the upheaval following the Persian destruction of Athens in 480 BC, according to Padgett.

Even from the Berlin Painter’s late phase, however, sparks of brilliance emerge. An Athenian state commission was granted to the artist, probably in the 470s BC, to produce the amphorae that were given out as prizes in the quadrennial Panathenaic athletic games. Two surviving examples, out of the thousand-plus that the commission required, are on display in the Princeton exhibition. Both are breathtaking. The design of the Panathenaic vase was fixed by conventions: it had to be decorated in the old black-figure style, and to bear a stock image of Athena on one side, a freeze frame on the other depicting the action of the sport in question. Long-distance runners are vividly portrayed on one of the amphorae in the show, their muscles in vigorous motion as they approach a turning post. One older man, his body still lithe but his hair shaggy and receding, trails behind three rivals, perhaps conserving strength for a final kick. What was, in lesser hands, a staid genre is here infused with personality and drama.

The Earthy Glories of Ancient China

The fascinating exhibition of Qin and Han dynasty artifacts at the Metropolitan Museum of Art presents objects that lay buried in tombs for many centuries.