In defiance and celebration of the earthen black that surrounds them, the vigorously delineated horses, flowers, hands, faces, stripes, a nude, and a foot found in Ellen Berkenblit’s striking new paintings at Anton Kern Gallery are a riot of luminous colors—violets, pinks, reds, oranges, greens, blues, and everything in between. The objects in the paintings have, according to the artist, been present in her imagery since her 1960s childhood in suburban New York, and are the stuff of mid-twentieth-century girlish fascination, mythical emblems amplified in memory.

As with Manet’s matadors or Matisse’s dancers—or more recently, the paintings of one of Berkenblit’s close contemporaries, Carroll Dunham, known for his idiosyncratic color palette, horses, and nudes—the things in Berkenblit’s paintings seem to be malleable and evocative receptacles of color and texture. The intertwining of image and technique has long been a concern of Berkenblit, who has been showing in New York for thirty years, and is, with Dunham, one of a handful of painters, including Dana Schutz, Jason Fox, and Amy Sillman, equally concerned with the possibilities of expressive figuration and virtuosic paint-handling.

Berkenblit began work on the paintings in the present exhibition last fall using her usual toolbox of small brushes, a palette knife, oil sticks, and a palette for color mixing. She employed two distinct modes of painting. In the first, she begins with charcoal on canvas. Then the paint comes in—defining areas, rendering forms, and bringing in bands of color that resemble fabric strips. In the second mode, Berkenblit, who has been a seamstress nearly all her life, sews together various fabrics, has the resultant quilt stretched and backed with cloth, and then coats it with PVA (polyvinyl alcohol), a water-soluble synthetic polymer, so that there’s a proper surface to take the paint. The quilt functions as a kind of under-drawing that she must respond to with bold lines and strips of color. It’s as though, she told me, she had written a poem and the words were thrown back at her with the command to write it anew.

In both modes she paints with the arc of her arm, wrist, and hand—a kind of active body calligraphy one might associate with post-war American abstraction. As the paintings progress over time, and the figures in them coalesce, both the colors and textures determine the formal composition. Berkenblit refers to her color mixing as a joyous, furious, faceted, and meditative process that results in small batches (the palette she uses is not large) that are always different. Tincture of Musk (2017) features a chalky violet for the Victorian cuffs encasing the wrist and hand that dominate the picture. The fingernails are aglow with orange, white, blue, and pink as they reach confidently into the darkness. The horses that stand relaxed and attentive in Lilac (2016) and Green Plume (2016) were initially painted with a mixture of various earthy browns—gritty, orange, and red. Then Berkenblit added transparent and extremely high-tinting paint that brightens the hue of the base color. This last touch—the turquoise—the artist referred to as her version of a perfumist’s “overdosing”—adding to a scent to push it toward a new and perhaps unexpected odor. At first glance, the horse is bay. Wait a second, blink, and there’s a turquoise haze. Then that new light is unavoidably present. In these pictures and others, that brown horse is ablaze against the encroaching black. Every painting in this exhibition features multiple shades and textures of black painted on after the figural elements, helping to build, erase, and ultimately define them. Berkenblit’s blacks are mottled with a palette knife—gently brushed on, dragged and rubbed. 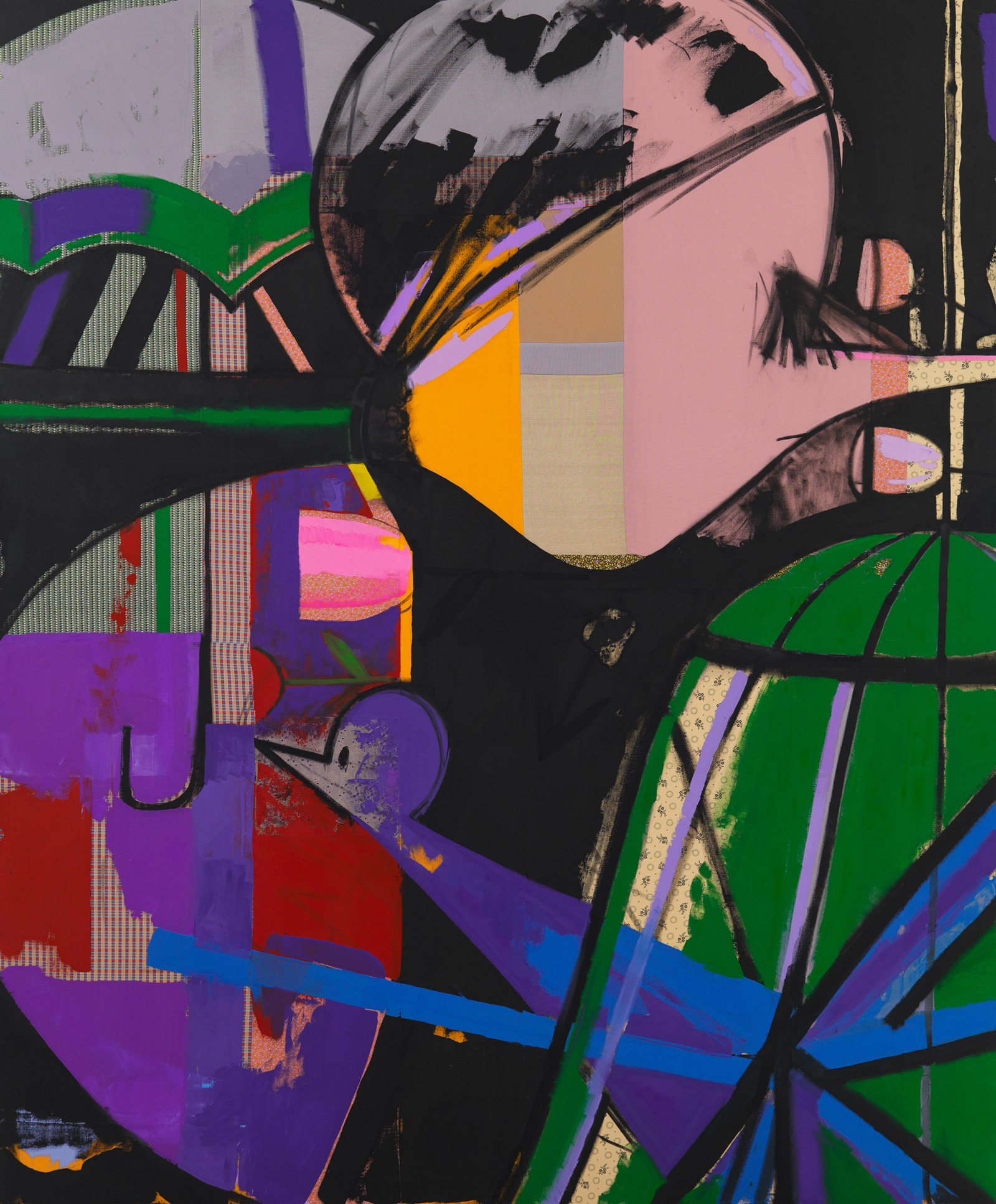 Ellen Berkenblit: I Don't Object If You Call Collect, 2017 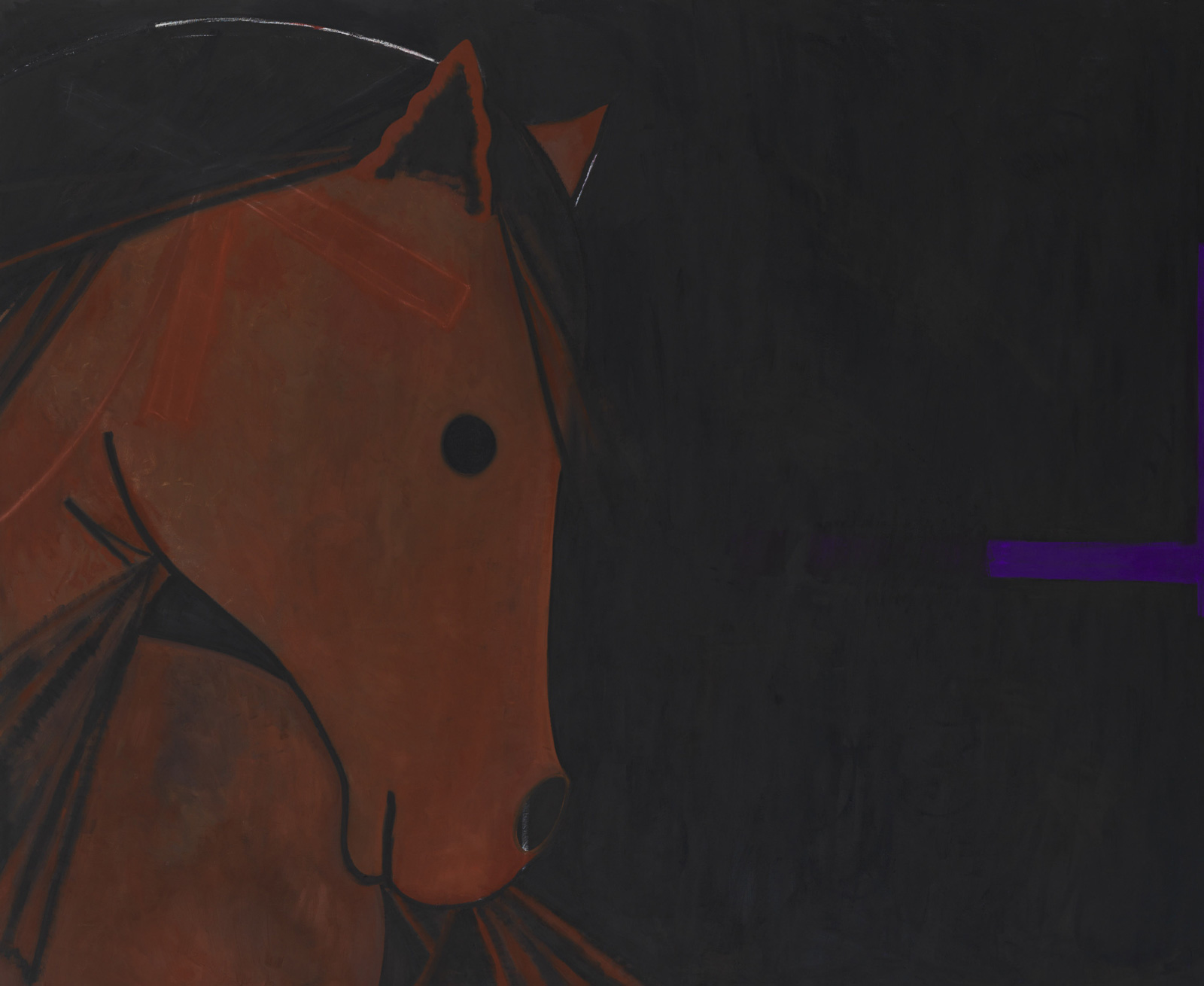 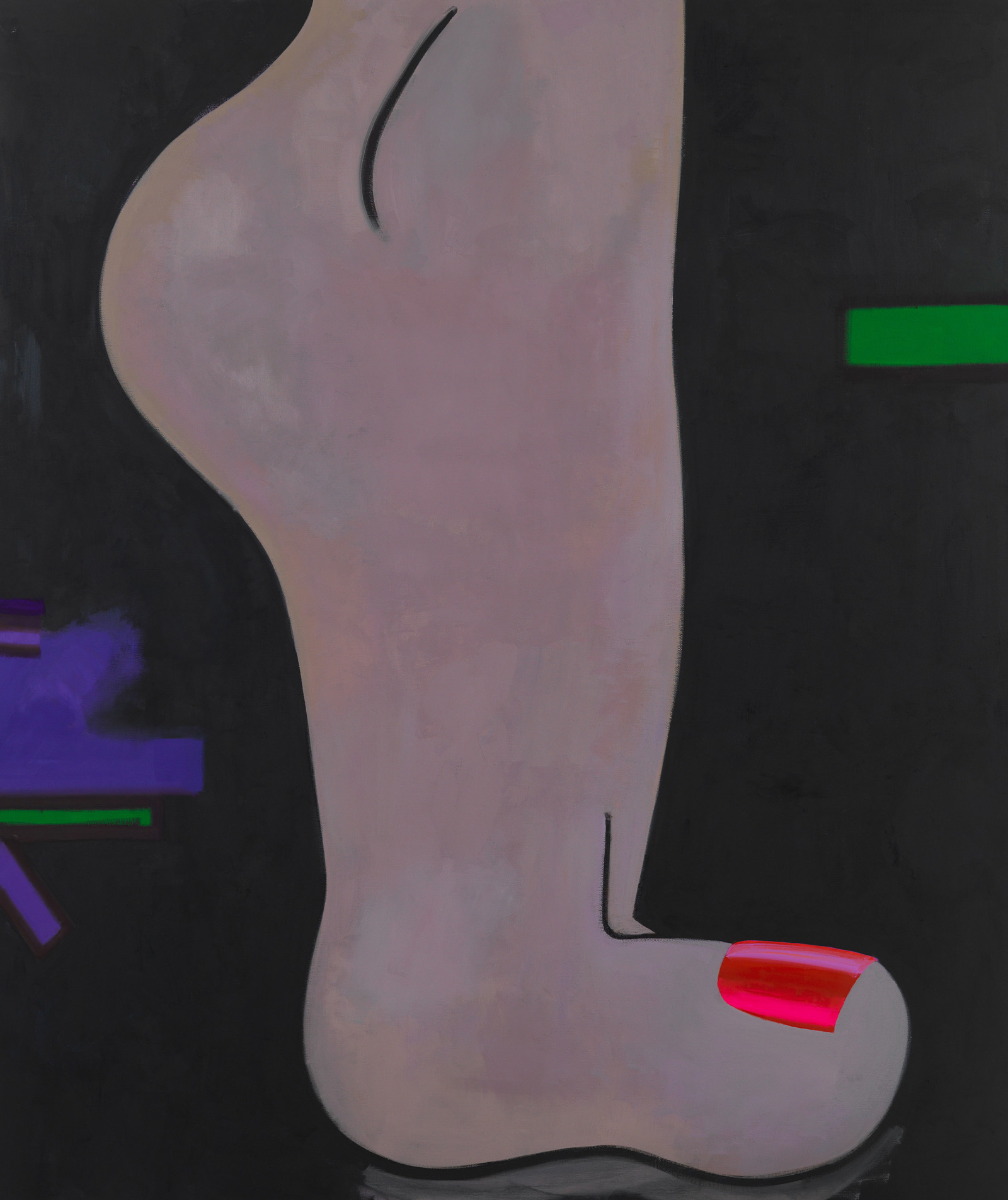 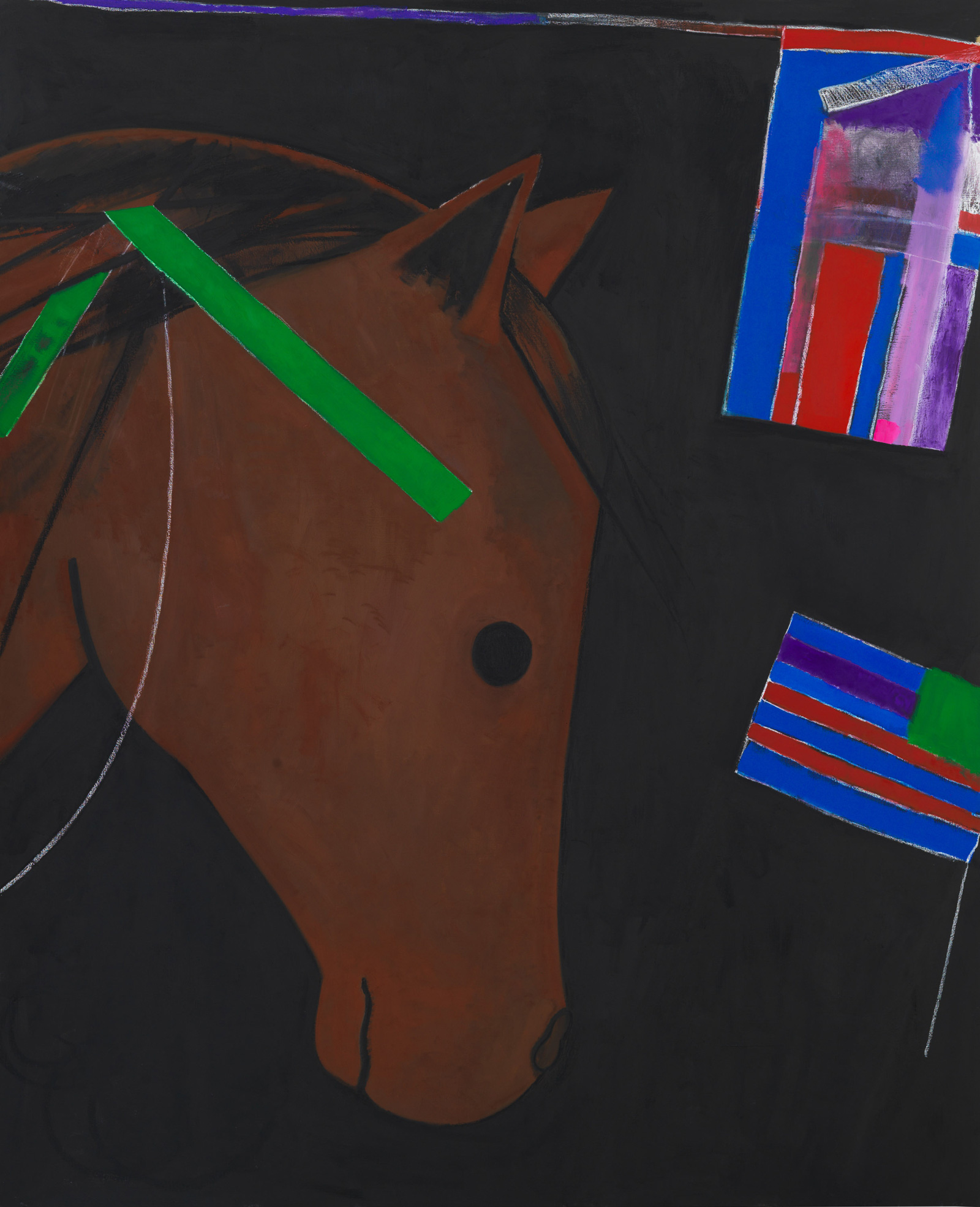 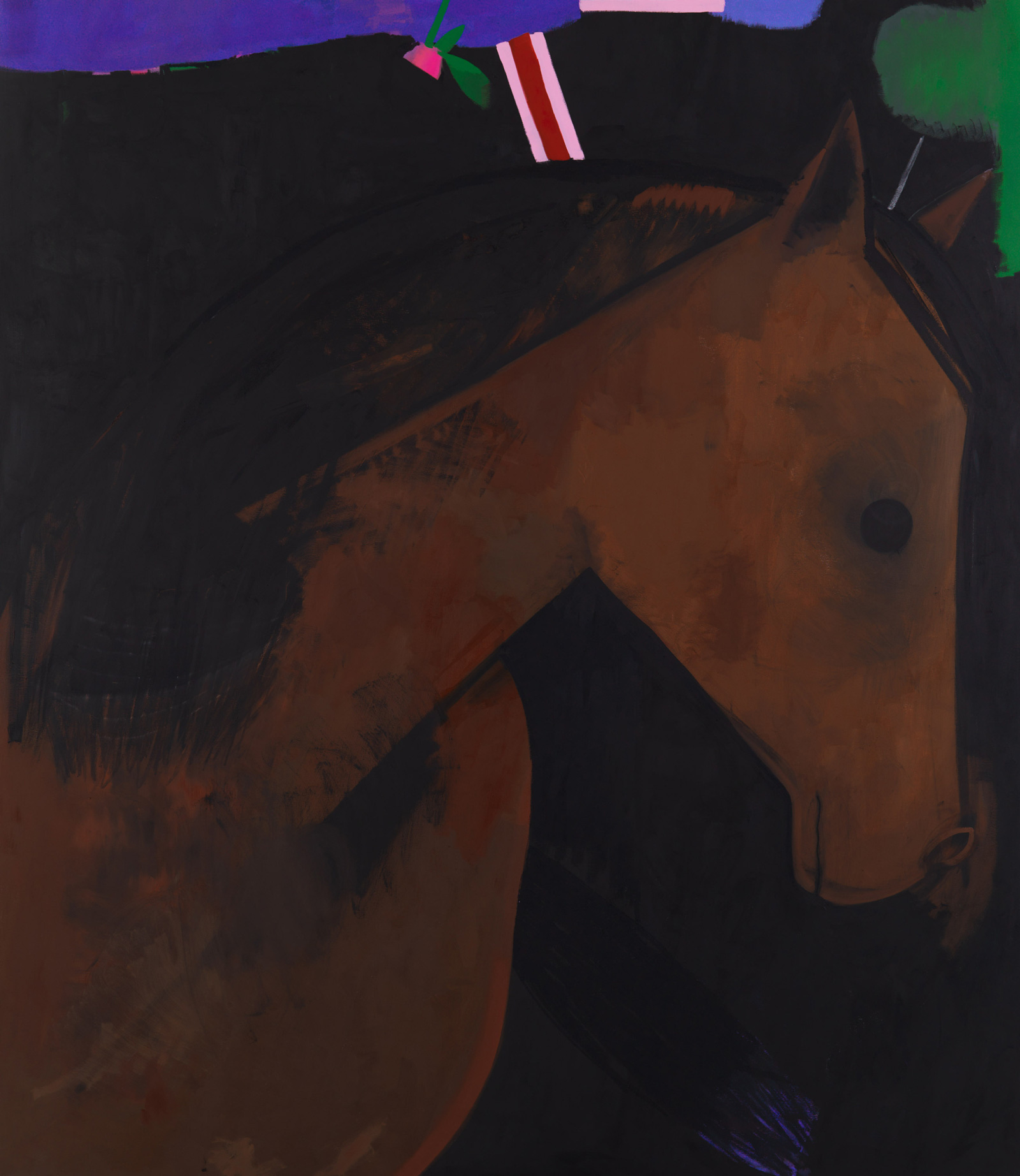 Texture here serves both the painter, by giving her the pleasure of the touch, and the painting, by adding layers of meaning. In I Don’t Object If You Call Collect (2017) purple spreads over an embroidered fabric, highlighting the raised areas like a scientist brushing solution on a specimen. Each layer of paint reveals shapes and colors, both painted and sewn, as if simultaneously pre-existent and made anew. In other works, the layers within Berkenblit’s paintings seem to display the history of their own making. In Untitled (2017) a faint impression of a bow remains on the horse’s neck, a decision unmade and then left open; the horse doesn’t seem to mind as it stares at a horizontal swatch of violet. Berkenblit refuses to resolve her paintings: there is no perfection or sense of clarity here, and in this way she recalls not just her New York predecessors—the action figuration of Jim Dine, say, or the abstract excavations of Arshile Gorky—but Matisse’s scraped spaces in his 1910s paintings. Berkenblit’s refusal to neither thematically nor compositionally seal her pictures allows for many readings, and the pictorial subject matter—horses, tigers, nudes, hands —nods at myth-making. Her work is unironic, unembarrassed, and sincere about both form and content.

It would be foolish to ignore the timespan in which these paintings were made, but equally limiting to attach too much meaning to it. Untitled (2017) gives us a noble horse amidst flags. These are the colorfully emblazoned striped flags that can do double duty as the happy, celebratory signs of childhood parades and the dreadful symbols of today’s nationalism. Perhaps the most shocking and affecting painting in the exhibition is the one that gave Berkenblit the most trouble: V (2017). A woman strides through the black wearing only a dark brown velvet ribbon (composed of transparent reds and greens) around her neck. Her luminous skin tone is made up of various whites, raw sienna, purples, terre verte, and different transparent greens, among other pigments. A row of flowers stands beside her at diagonal attention. Her open hand tells us that she may pick one, or may have already. Her chin is just below the edge of the canvas. She is the most complete and thickly painted figure in the show, and appears uncannily strong. The painting is a stunning thing, alive like little else I’ve seen in recent times, and an act of implicit protest. As with the horses and hands, this woman is somehow moving through the black, hopeful as she evinces a boldness, beauty, and nobility.

Ellen Berkenblit’s paintings are on view at Anton Kern Gallery through July 6.

Dan Nadel is the Curator at Large for the Jan Shrem and Maria Manetti Shrem Museum of Art at the University of California at  Davis. His books include Return to Romance: The Strange Love Stories of Ogden Whitney and the forthcoming Peter Saul: Professional ­Artist Correspondence, 1945–1976.  (July 2020)

Matisse: The Joy of Things

Matisse, unsurprisingly, had strong feelings about the objects of his daily life. They delighted, inspired, or confounded him, in their humble ordinariness and in all that they evoked.