“The first story in the world is about safe passage,” Teju Cole writes in “Blind Spot,” an exhibition of thirty-two photographs and paired prose reflections at Steven Kasher Gallery. The story is an O’odham origin myth about the creator I’itoi, who transformed the first people into ants and guided them through the labyrinth of the Sonoran desert. But the accompanying image evokes contemporary immigration: a red corrugated wall near the US–Mexico border in Sasabe tears through scrubland like a gash or pathway, intersected by a large white cross tilted at a sixty-degree angle. The foreground is screened by a wire fence bisecting the frame, and frontiers collide in the composition’s angular geometry. No human figures appear, but between word and image vast migrations seem to flicker.

Conceived after he suffered an attack of papillophlebitis, or “big blind spot syndrome,” in 2011, “Blind Spot” and its companion volume of the same title complete what Cole calls “a quartet about the limits of vision.” It combines the omnivorous erudition of his 2016 essay collection Known and Strange Things—which includes criticism on Saul Leiter’s early color photographs of New York City, the conflict photojournalism of Sergei Ilnitsky and Glenna Gordon, and Roy DeCarava’s pioneering work on photographing black skin—with the associative structure of Every Day is for the Thief (2007) and Open City (2011), peripatetic novels set, respectively, in Lagos and New York. The show is a record of Cole’s extensive travels between 2011 and 2017, but it is more about the paths of others than his own itinerary. Passing from Zürich and Brazzaville to Chicago, Brooklyn, and Beirut, the exhibition’s progression suggests a journey. The visitor is a pilgrim, circumnavigating globe and gallery in an odyssey of vision regained.

Cole’s photographs are filled with cars, hotel rooms, ladders, boats, bus stops, tire tracks, mountain trails, and street signs—a tacit geography of human transit. A wall in the middle of the gallery collects five pictures of pedestrians turned away from the camera. (Revisiting the World Trade Center site for the first time since 2001, Cole trails a uniformed sailor: “One turns away to show what cannot otherwise be shown.”) The wall’s opposite side showcases “Black Paper,” a smaller exhibition of Cole’s photographs capturing the global mood after the 2016 election. Throughout the gallery, the arrangement of materials invites reading before viewing. Although one’s first impression is of a visual composite, the captions, set in columns at the right of each frame, precede the images in the exhibition’s counterclockwise circuit. (The book also puts captions first, on verso pages.) Words create atmospheres of expectation in which photographs become visual koans, less concerned with what can be seen than with heightening our awareness of what cannot. 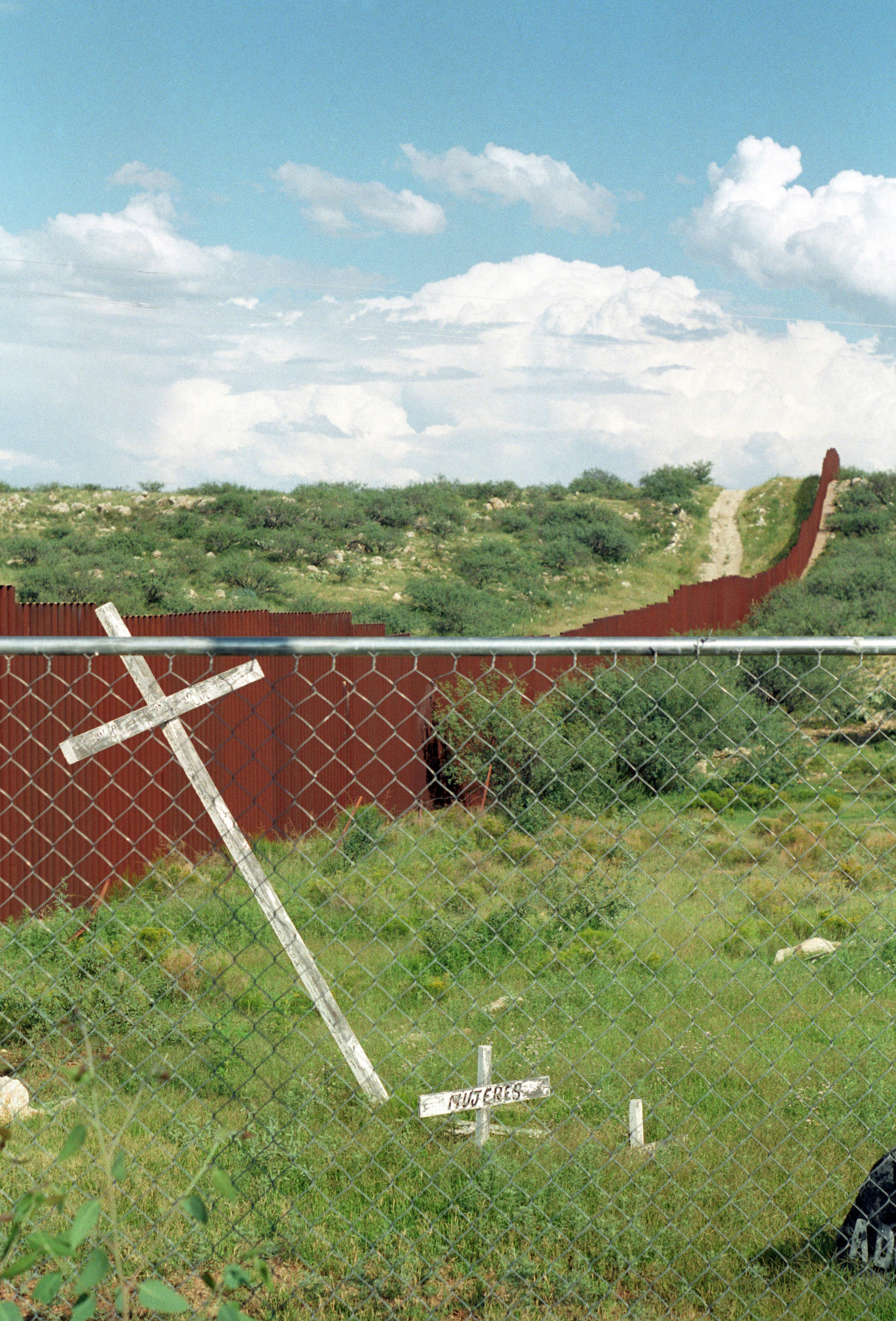 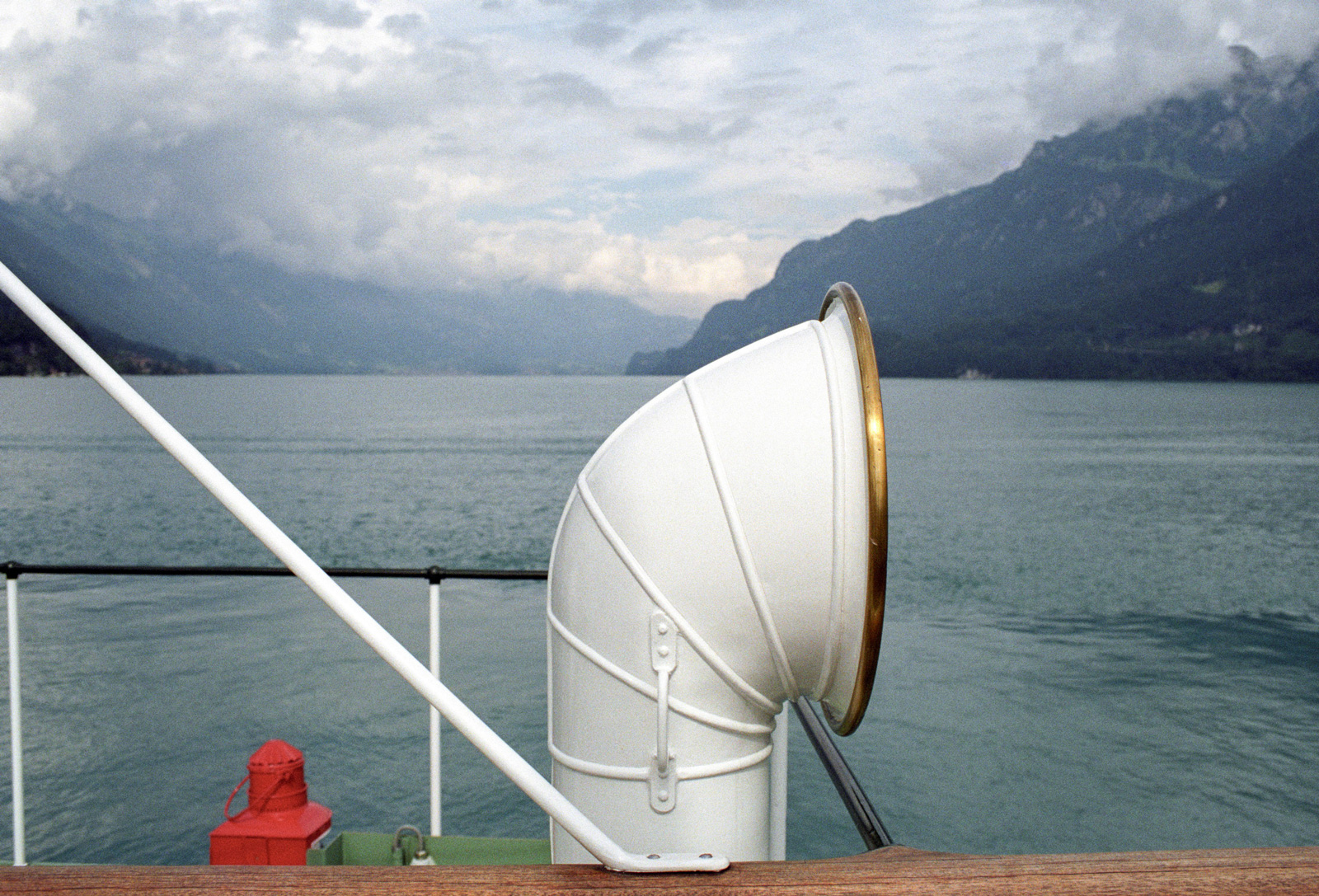 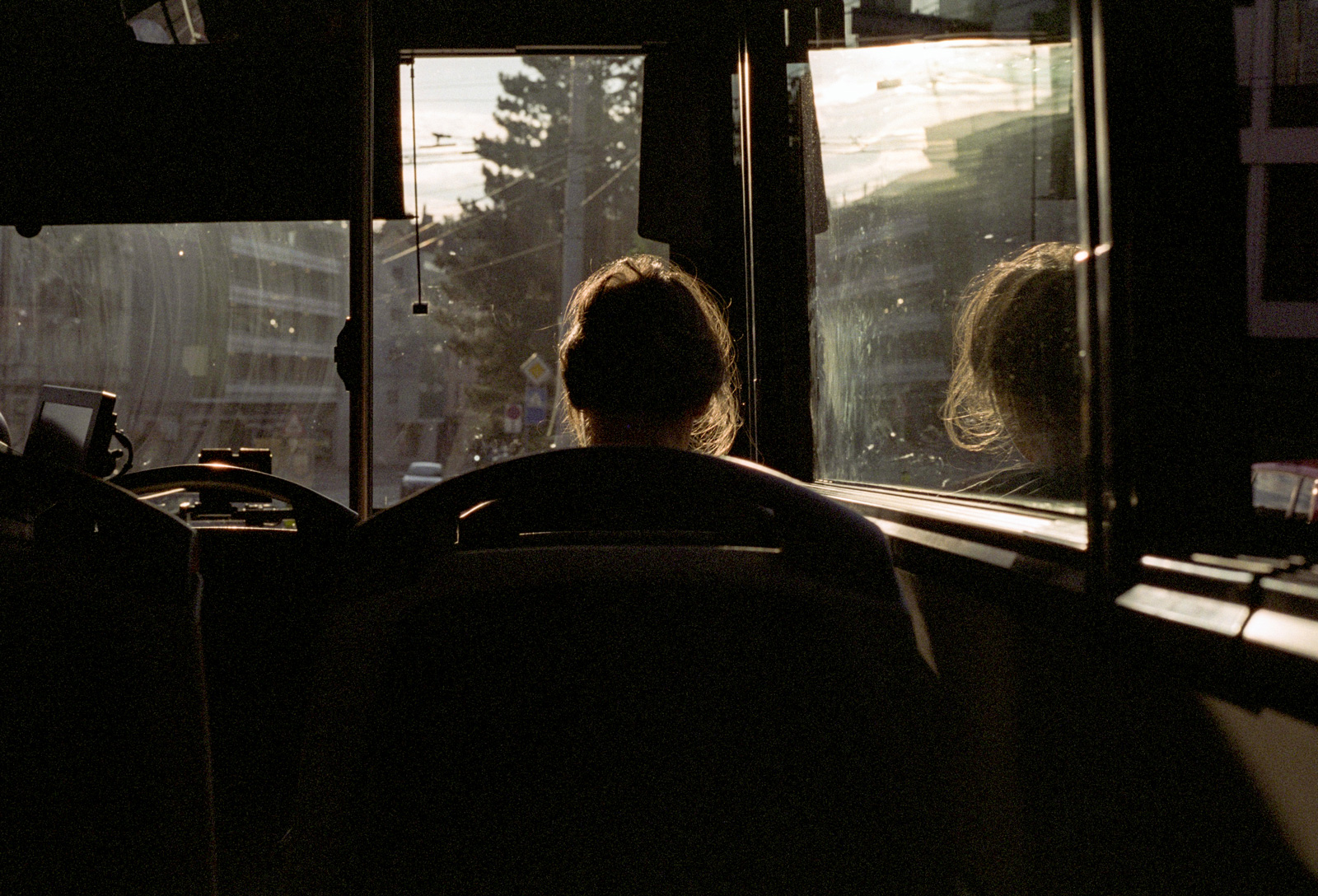 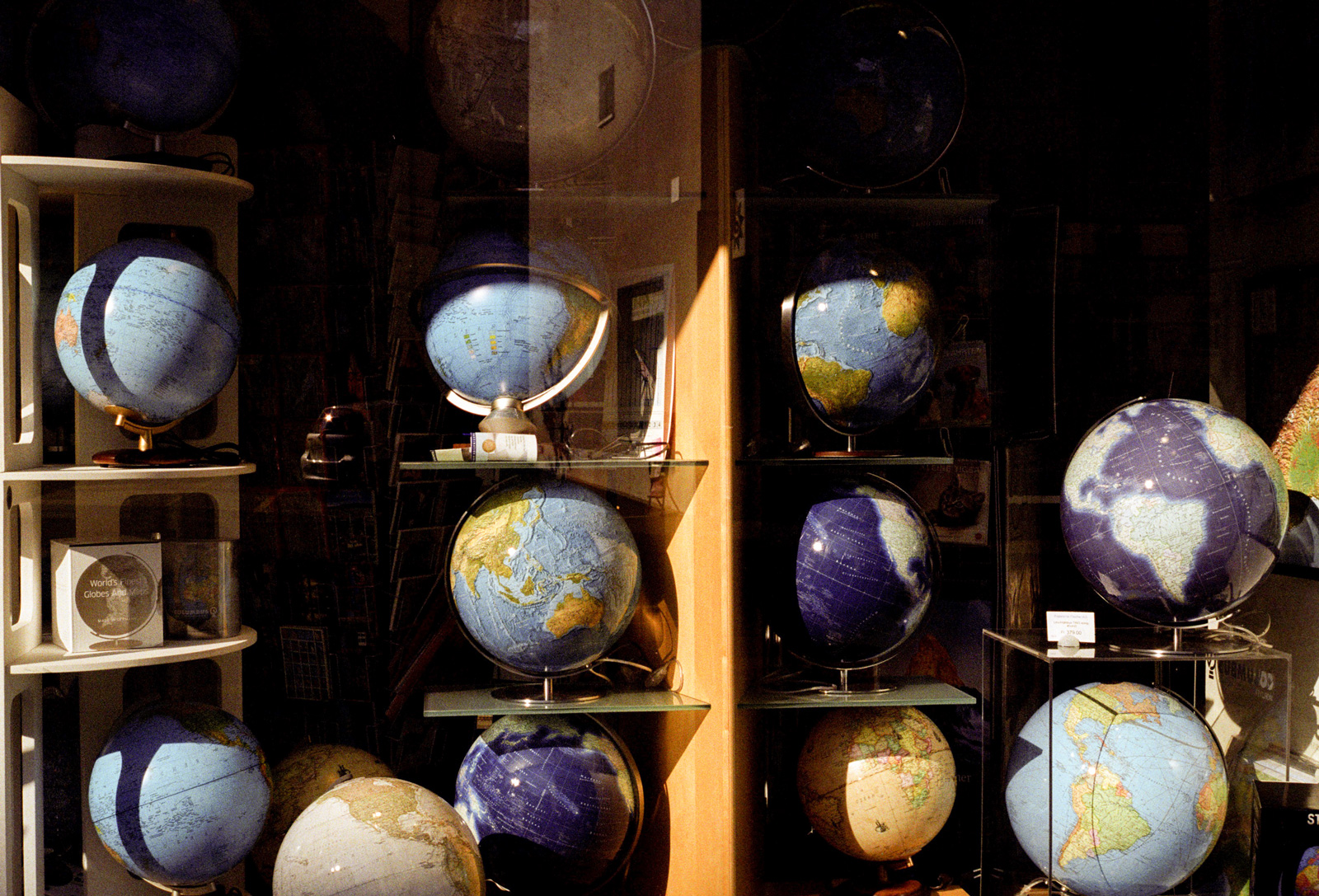 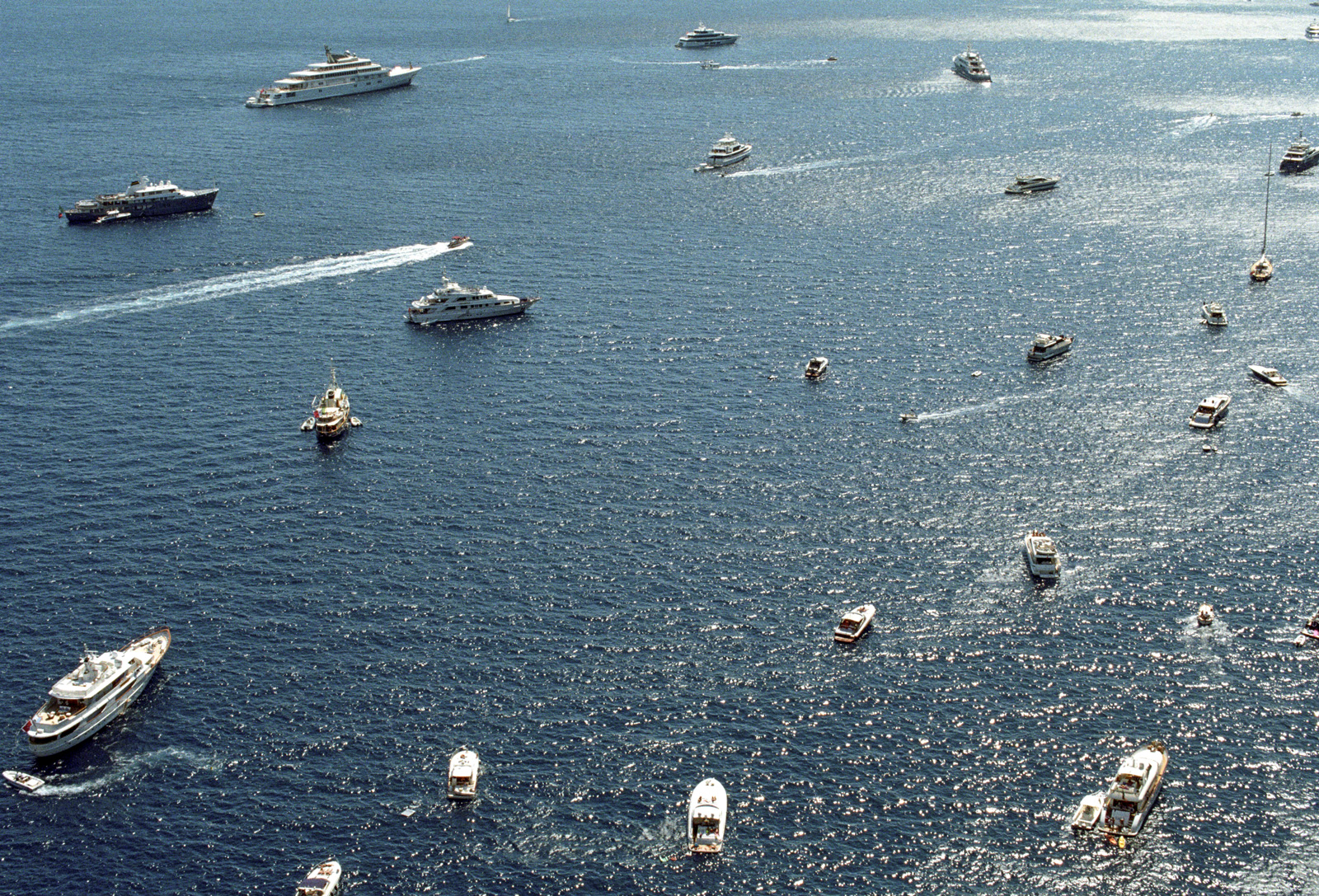 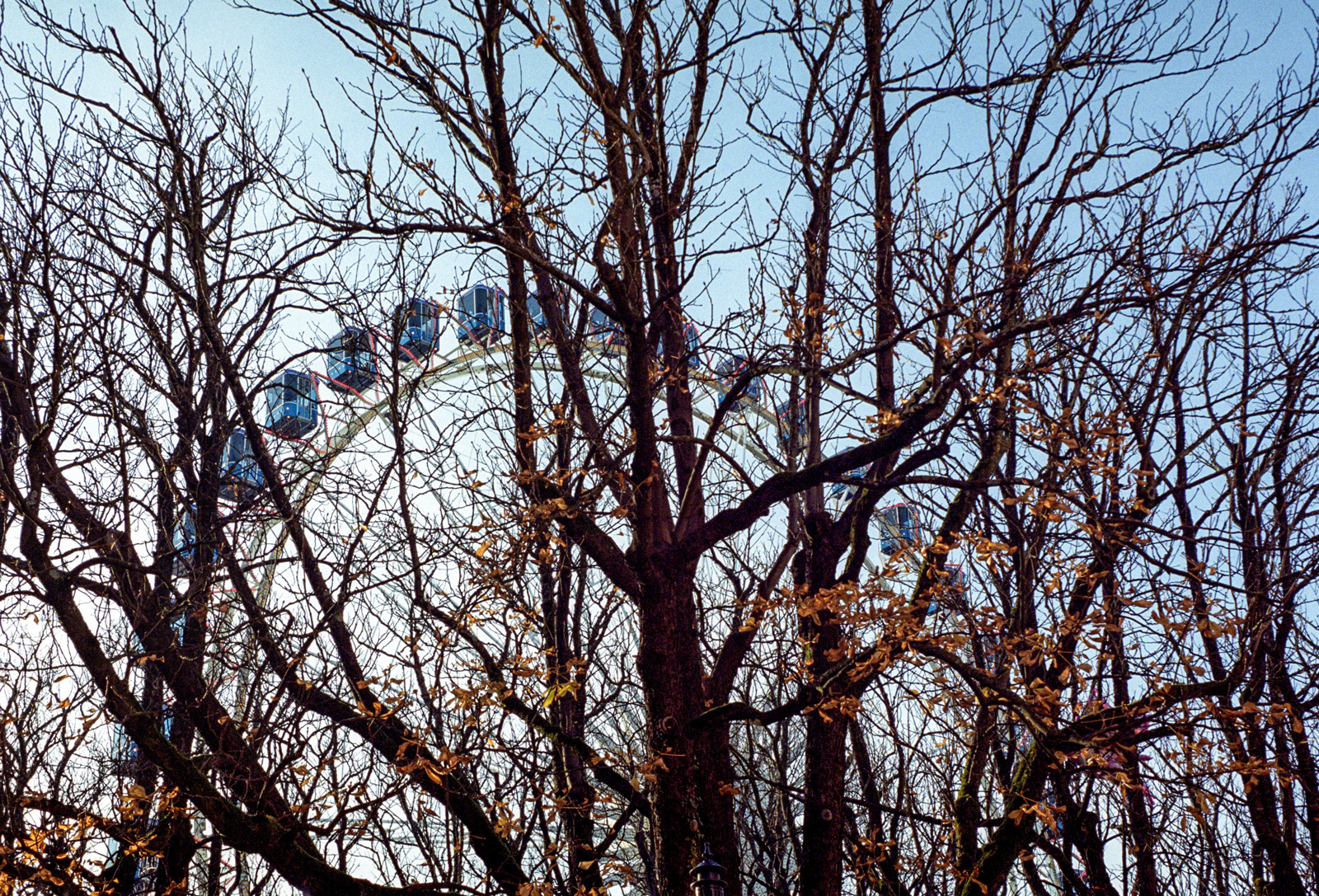 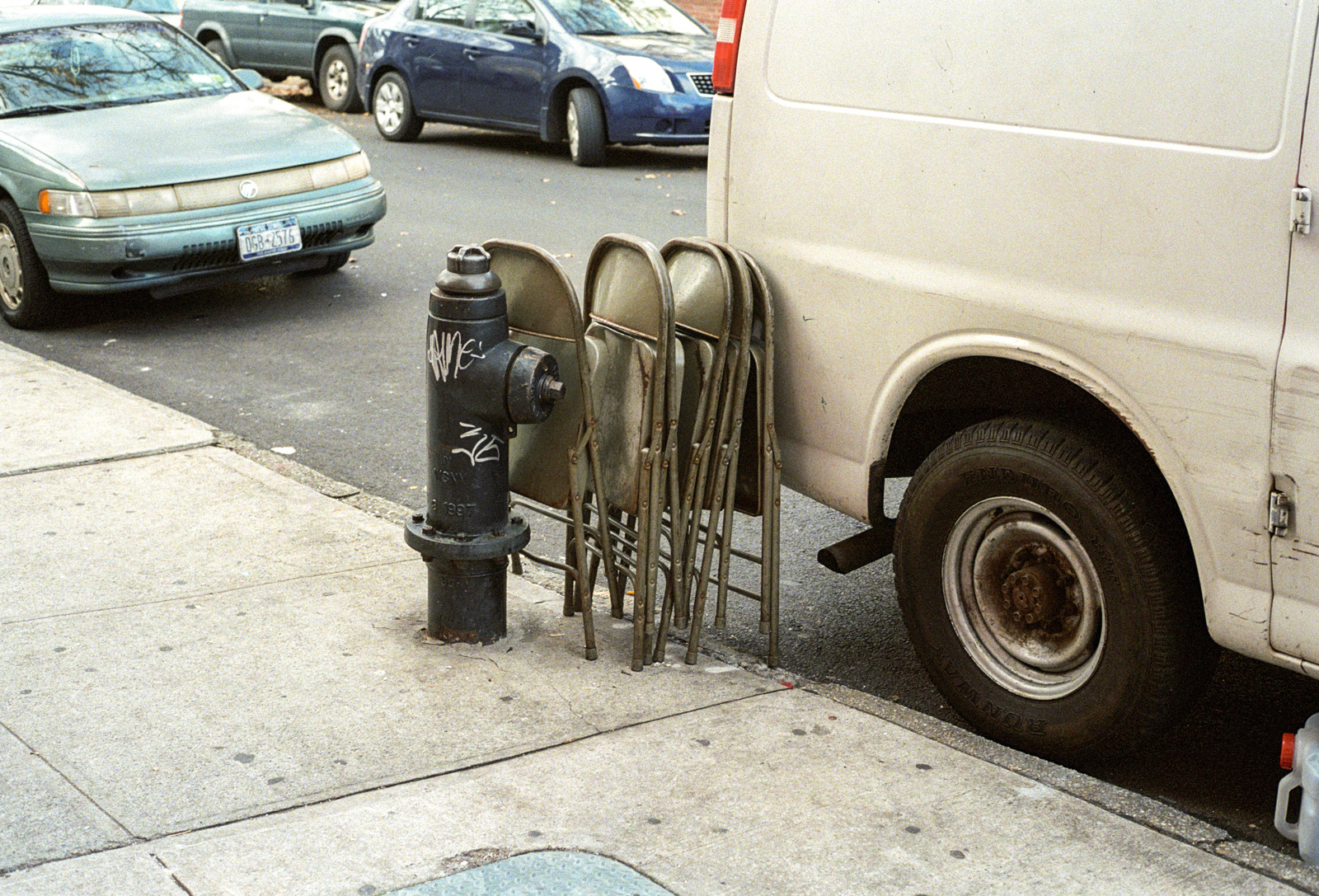 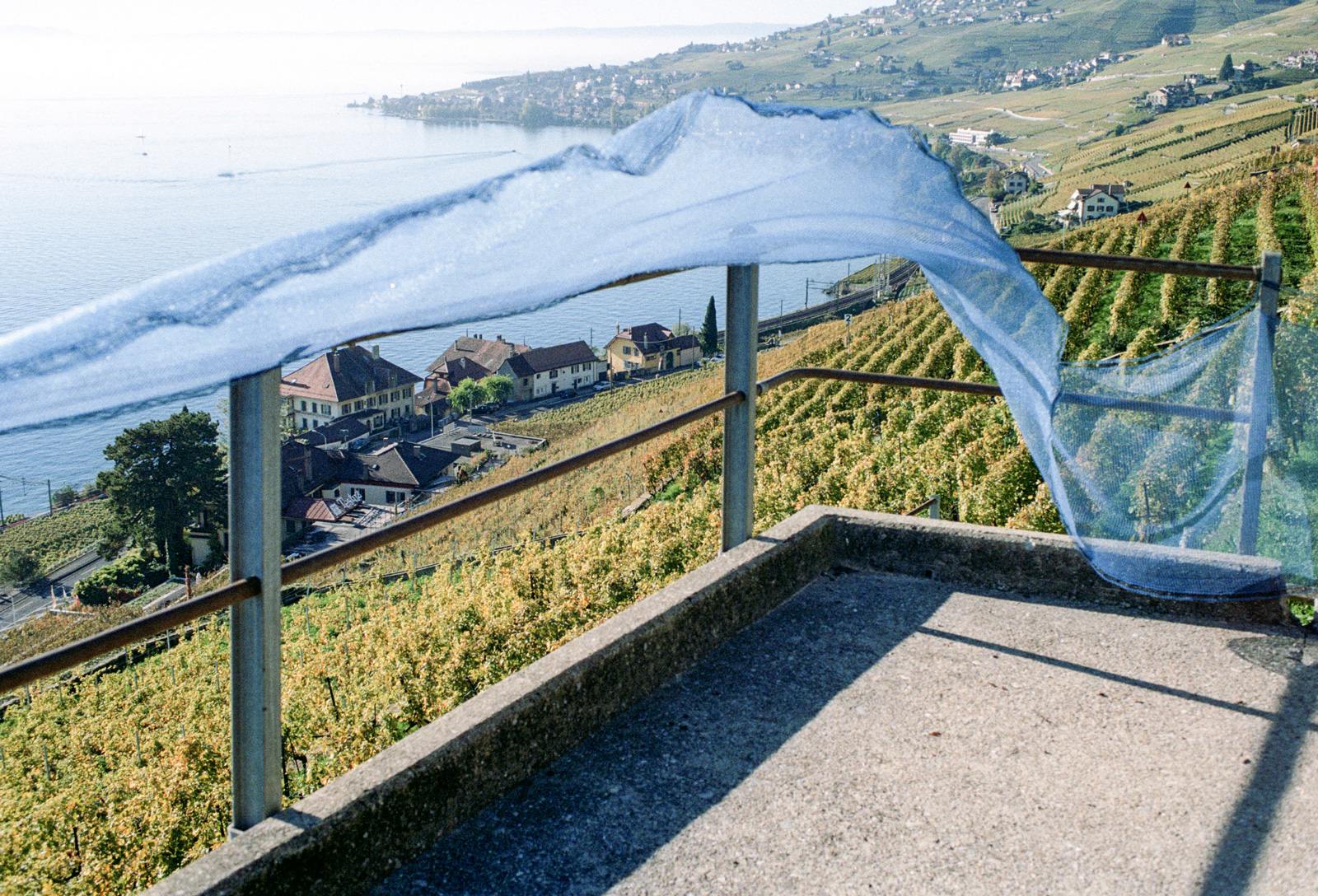 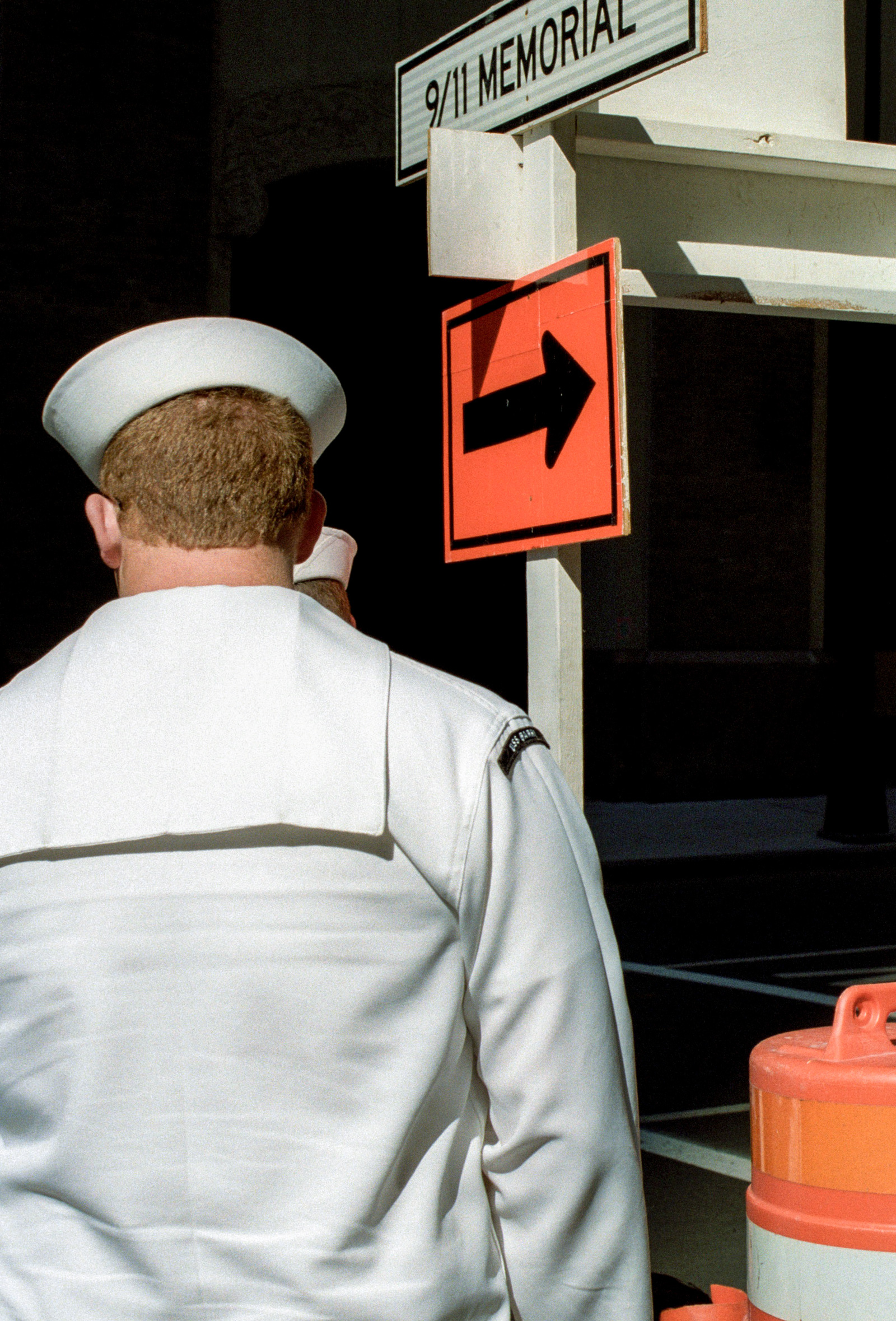 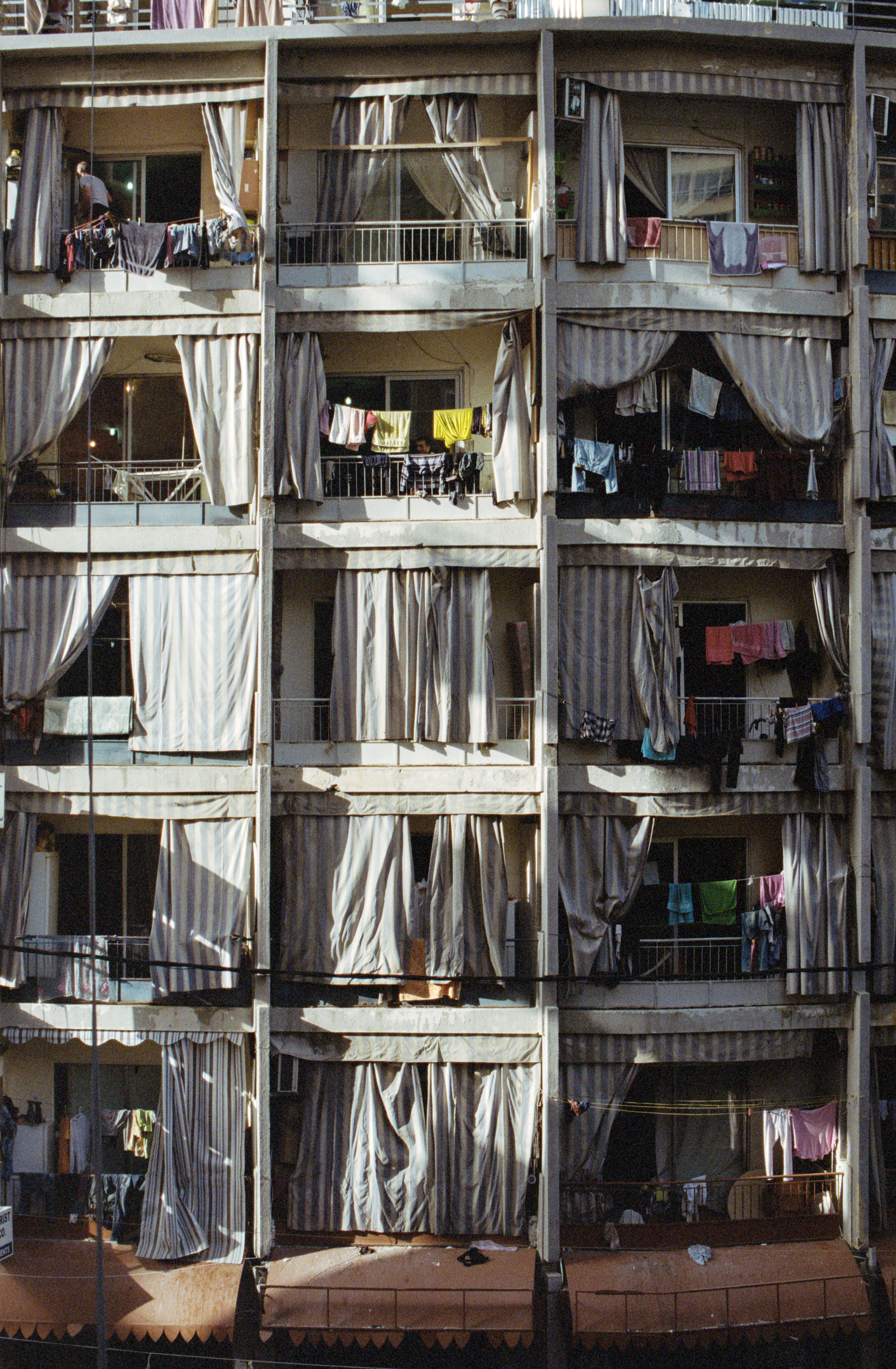 The show is nearly perfect, building momentum from the reveille of a ship’s steam funnel on a clouded lake to the concluding view of a hillside vineyard beyond a billowing net. The intervening photographs educate the eye, transforming vision’s limitations into an ethos—and sometimes an ethics—of seeing. Clotheslines caught in the wind inspire a riff on Troxler’s fading, a neurological phenomenon that causes regular movement in the peripheral vision to vanish. Cole finds a political analogy: marginal lives disappear into the background whenever protest becomes routine. The exhibition’s third- and second-to-last photographs show shapeless puddles of mud, a climax that both underscores the limitations of photographic composition (“Geology defeats geometry… Euclid cannot help us here”) and summons scripture to bless the resurrection of sight. Cole quotes John 9:7—“The man called Jesus made mud, spread it on my eyes, and said to me ‘Go to Siloam and wash’”—in a fitting prelude to the final image’s striking landscape.

The print volume published by Random House includes roughly five times the number of images. It is a work of accidental cartography: “Without my having intended it,” Cole writes in the postscript, ”the map of my movements was becoming a map of the world.” Eschewing markers of cultural or geographic difference, he investigates “the common semantics of used space” across more than twenty countries, compassing the earth by parsing its loose ends and frayed edges.

This encyclopedic ambition results in handful of arid patches. Torn screen doors and water-damaged walls sit beside anemic anecdotes and thin Biblical allegories. But art books are made to be browsed, and it’s possible that Cole’s occasional excess of understatement is the price exacted by Blind Spot’s more evocative juxtapositions.

En route to a Black Lives Matter demonstration, Cole transforms five beige folding chairs leaning between a hydrant and a van into surrogate protestors, indices of courage and solidarity. In Ubud, Indonesia, a vehicle’s shrouded chassis peeks out from under a guillotine-like garage door beside a flowering tree—an improvised cenotaph for the victims of the country’s 1960s mass killings. White boats off Capri prompt allusions to the Iliad’s glittering fleets but also the migrants of the contemporary Mediterranean. Cole’s adjacent text quotes the Irish writer Edna O’Brien: “We know about these beautiful waters that have death in them.” Monuments are everywhere, if you know where to look.

In many of the captions, Cole expertly punctures placidity to expose concealed violence. The picture of a neat Swiss hotel room, its dresser doors printed with a mountain lake, provokes him to consider terrorist attacks on public spaces “popular with Westerners” like this one. (When the Ghanaian poet Kofi Awoonor was killed by Al-Shabab at a Nairobi mall in 2013, Cole was giving a lecture nearby. “Blind Spot” is suffused with this contingency of survival.) “The point is to shatter serenity,” Cole writes. “Anything can happen.” Only after reading did I notice the photograph’s corroboration: an emergency floorplan tacked to the door.

Moments like these have a forensic aspect reminiscent of Julio Cortázar’s “Blow-Up” (adapted by Antonioni for a film of the same name), the story of a photographer in his darkroom discovering a crime he shot but failed to see. On the Zürich tram, Cole photographs a passenger in the front row, her head doubled by a reflection in the window. He later finds that the name and date tattooed on her neck correspond to the victim of a car wreck in Arizona; she may be one of the two survivors. Elsewhere in Zürich, a cowboy stenciled on an exterior wall draws his revolver. Cole sees a talisman of the Swiss arms industry, “death merchants busy about their precision work” hidden by the “ease and calm” of the country.

That Switzerland does not get off easy in “Blind Spot” says a lot about Cole’s project. Like the artist Trevor Paglen, whose project “The Other Night Sky” uses time-lapse photography to reveal classified American satellites, Cole coolly enjoins us to look beyond facades of seeming neutrality. (In “Talking Pictures,” an exhibition of pictorial dialogues between artists that opened at the Metropolitan Museum in late June, Cole is appropriately paired with filmmaker Laura Poitras, who has made documentaries about Edward Snowden and Julian Assange. Over a period of months, the two exchanged pictures of TSA checkpoints, military research facilities in upstate New York, flowers, and an airport sign that reads, “Fly your drone safely.”)

Two scans of a single negative show a boy on the lip of the Congo River, standing between a short wall and the water while holding a red guardrail with both hands. In the first, placed near the beginning of the book and the show, his face is too dark to be read, and into this blankness Cole projects the figure of Christ or “Saint Christopher, the Christ bearer at the river’s lip.” The railing is a cross, and the boy a martyr midway through his Via Crucis. But in the second scan, which concludes the book, his features are clarified, and his relationship to movement shifts. No longer a cross-bearer traversing the rail’s horizontal, he now looks outward at the viewer, a stationary figure impeding our comfortable spectatorship. Cole alludes to Congolese Mangaaka sculptures of the nineteenth century, power figures built to ward off European encroachment. Where before there was nothing, a change of the light reveals a “double-visioned” face, newly legible yet guarding a still-deeper interior. “Darkness is not empty,” Cole writes. “It is information at rest.”

“Teju Cole: Blind Spot and Black Paper” is on view at the Steven Kasher Gallery through August 11. Teju Cole’s Blind Spot is published by Random House.

Julian Lucas is a staff writer at The New Yorker. (May 2022)

Derek Walcott spent a lifetime learning how to see the Caribbean.