In Hitchhiker, a glove and a toy car seem to break the surface of their own mirror images, like flotsam sinking into reflective water. Glove and car have both been sliced in half and are photographed on mirror tiles with their cut sides facing down. A drinking straw affixed to the glove lifts a scrap of white cloth like a handkerchief, and in the background, another mirror reflects a blurred brick wall. The car is a glowing, neon fuchsia, the glove chalky white. What seems to be a liquid patina on the print’s surface obscures the scene under swirls of indigo, mauve, and vermillion; a streak of gold, on closer examination, is distorted police tape, intimating the aftermath of a car accident. The image sets up a dark, absurdist joke: a stranded car and hand aren’t able to hitch a ride.

Nasatir—whose exhibition currently at the Whitney Museum features ten large chromogenic prints and seven smaller black-and-white prints, all produced in 2017—shoots on film and does not digitally retouch her images. This is uncommon enough for a contemporary photographer (her work could not be further from the commercial detournement of Elad Lassry or Amanda Ross-Ho, or the ecstatic digital portraiture of Ryan McGinley) and her analog production is made all the more surprising by the complexity of her compositions, which densely layer objects, tangles of wire, mirrors, surface glare, and textured patina in a shallow depth of field. These dream-like tableaux are the product of clever staging using mirrors, plexiglass, sheets of reflective plastic, and colored spotlights, as well as manipulation and re-shooting of the original prints.

The photographs begin as sculptures of found objects, often assembled from pieces of trash that Nasatir picks out near her studio. Butterfly depicts a doll bed and what appears to be a plastic butterfly hair clip, leopard-printed and covered with small holes, angled and lit to cast a looming shadow. Nasatir made the butterfly “clip” by stretching patterned stockings over a handmade wire frame. Presented with the deliberation of a still life, such makeshift objects gain a sense of significance not fully explained by the image; they imply a story or character, but stop short of imposing a clear narrative. In a 2015 exhibition at White Columns in New York City, Nasatir recreated scenes from film noir—Crime #1 (Heel) presents a stiletto heel as an object charged with menace. It evokes the shock of discovering a clue while withholding the details of the crime. 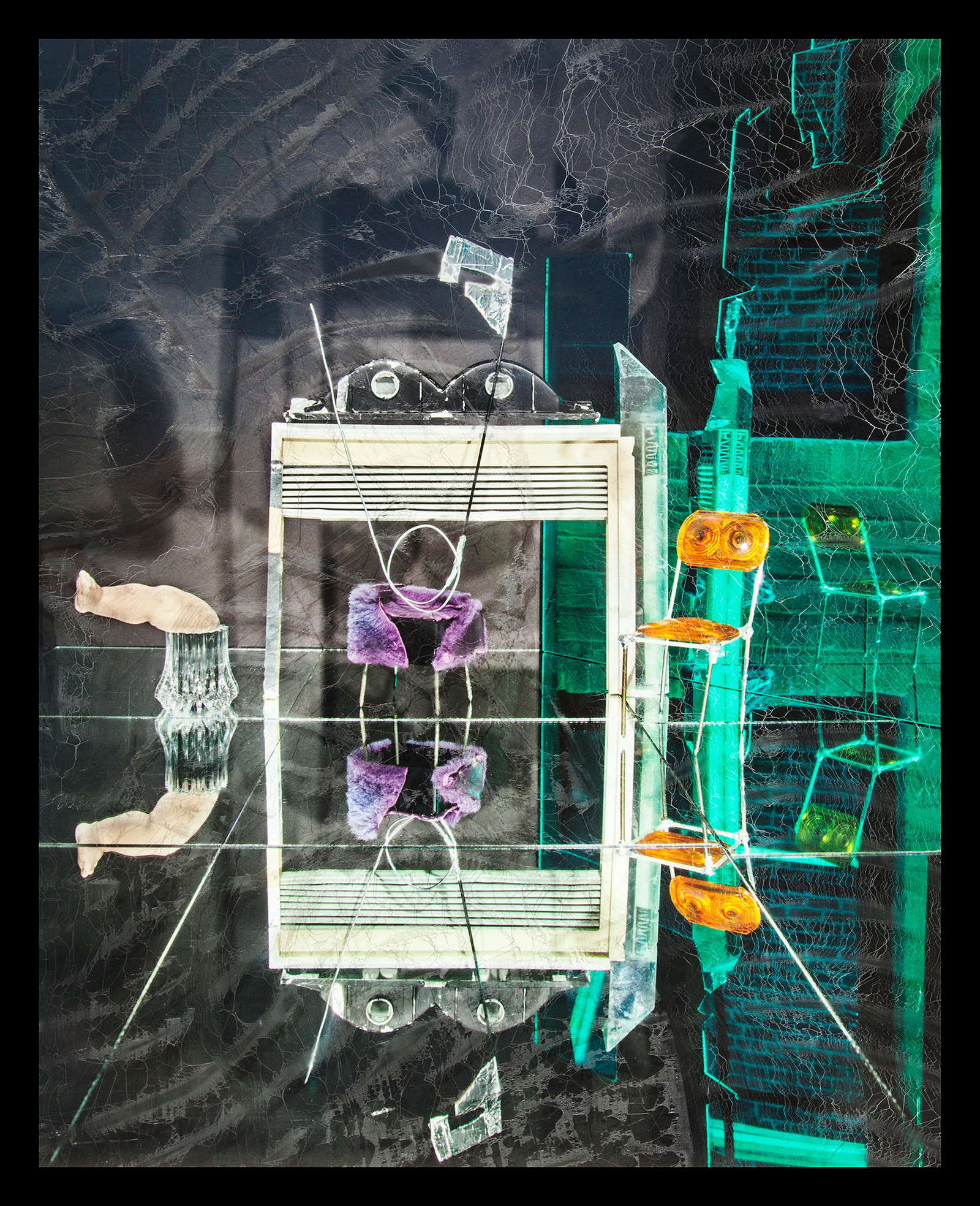 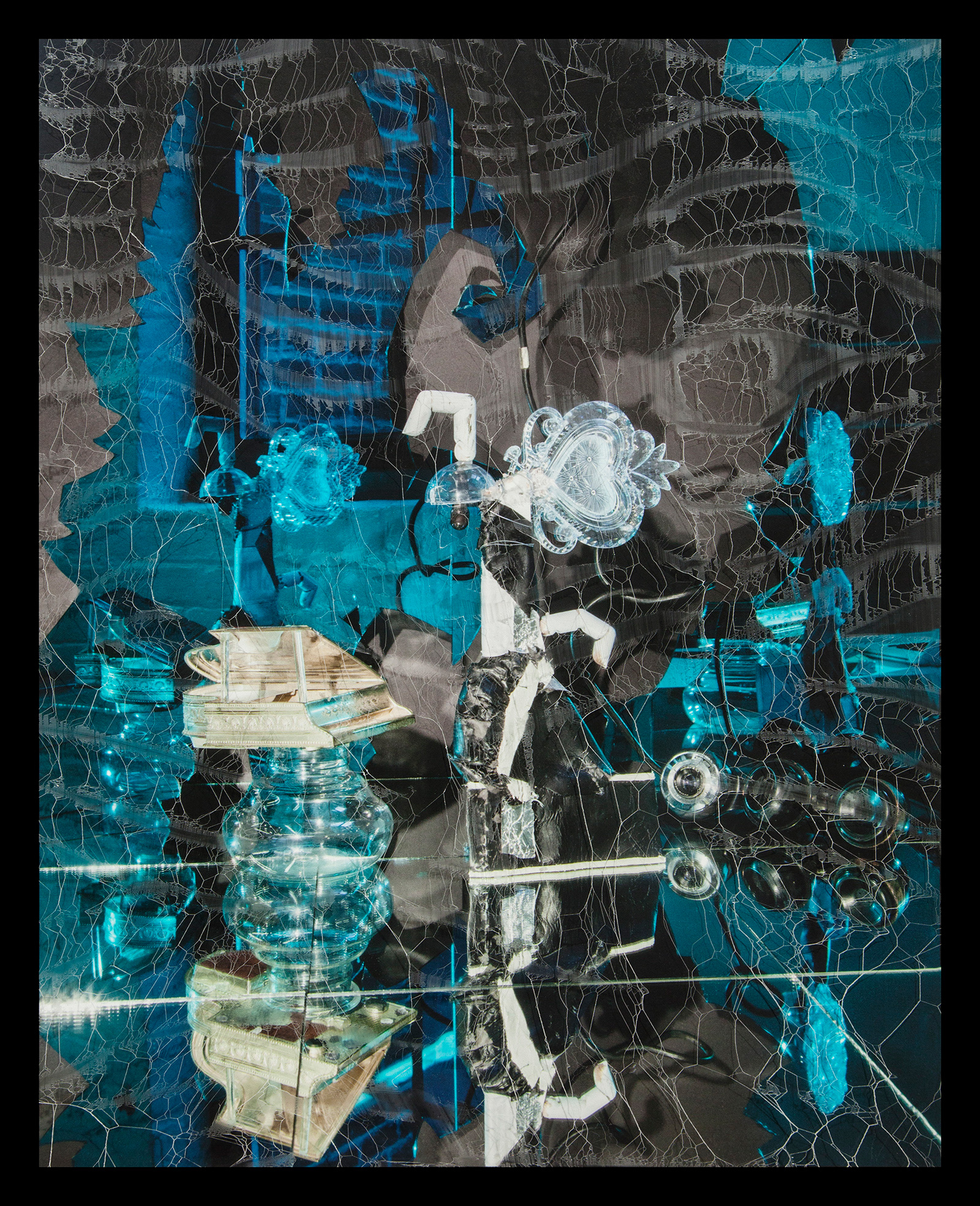 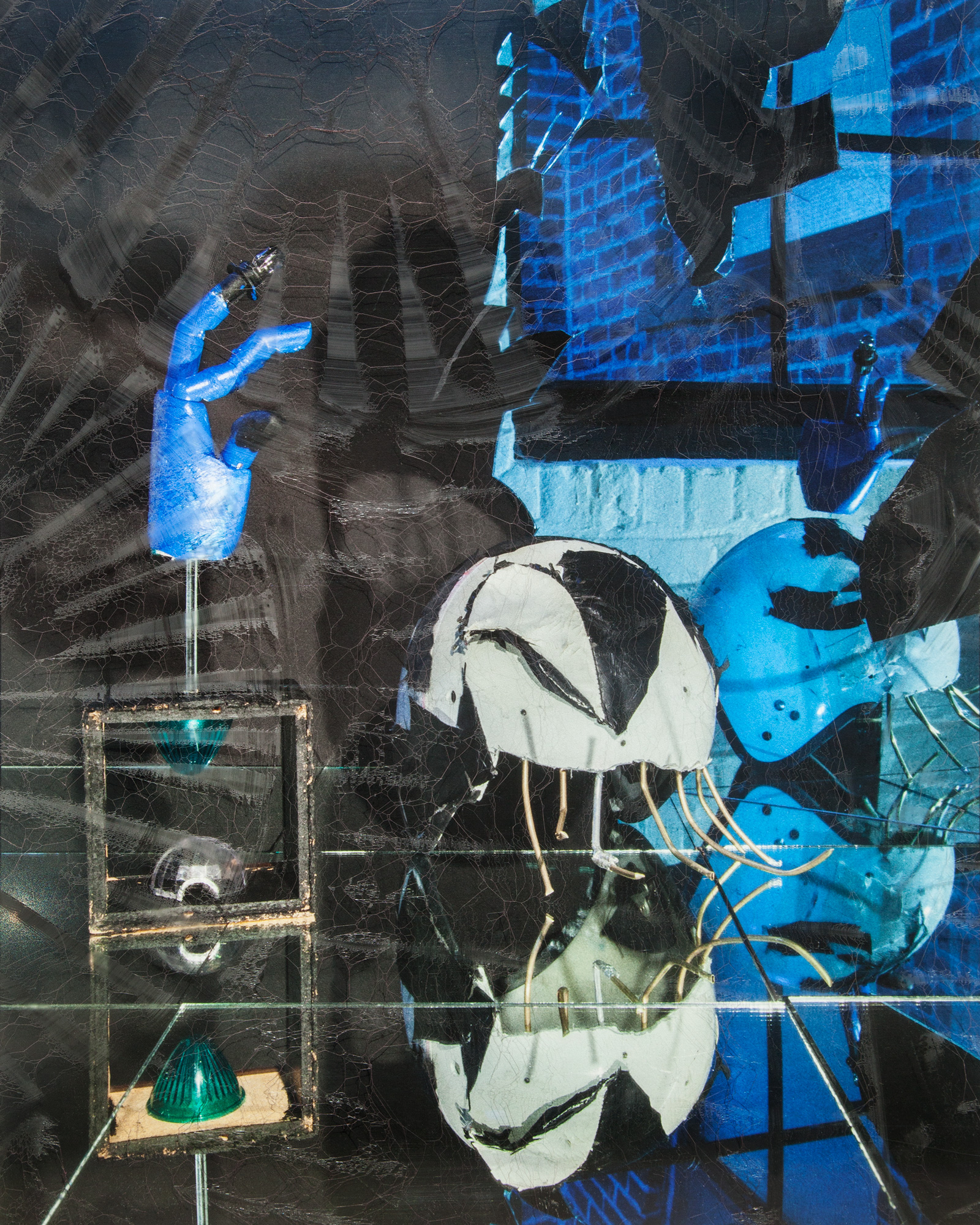 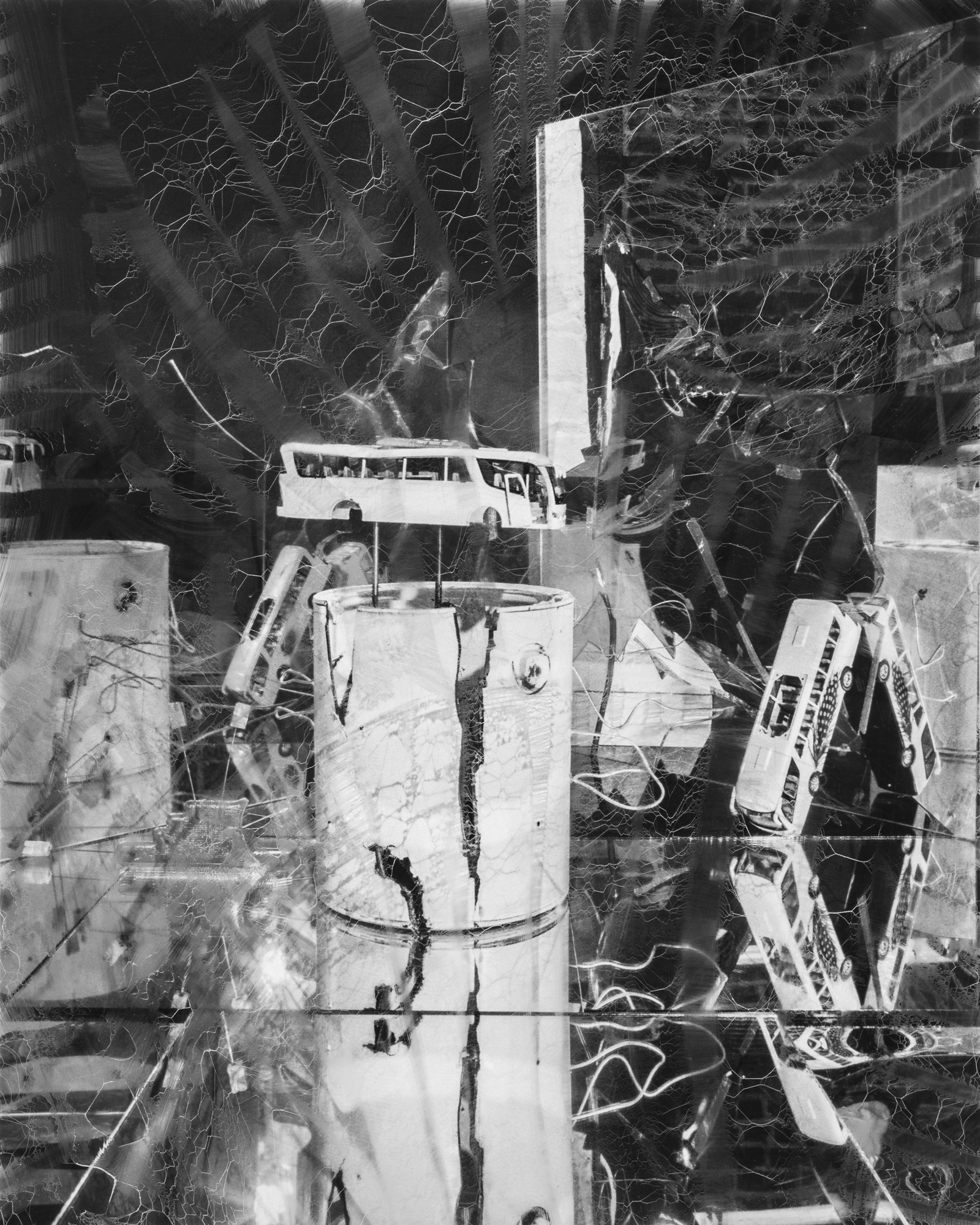 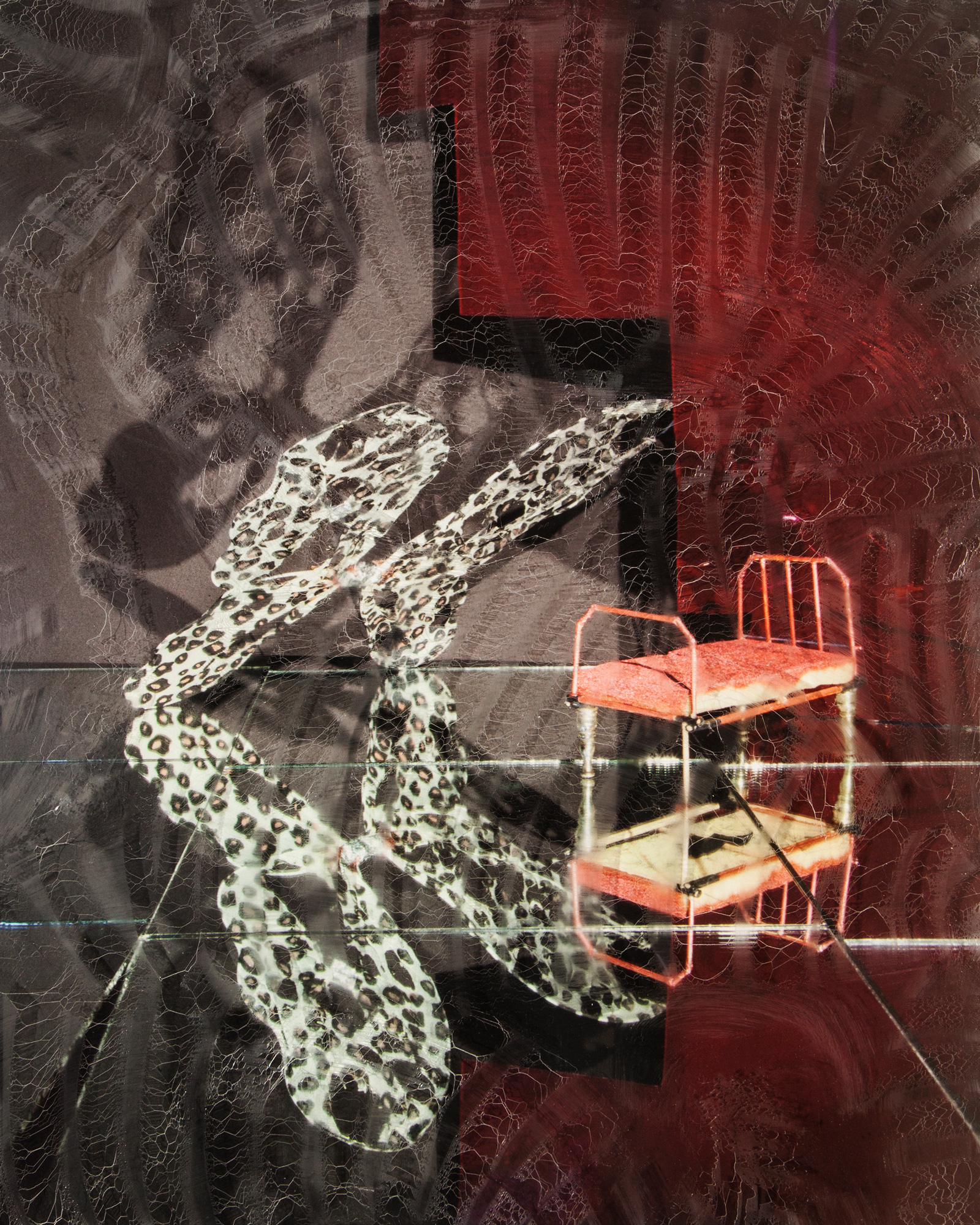 In the past, Nasatir has soaked prints in water, sanded them down, burned and frozen them, to be photographed a second, third, or fourth time through translucent screens textured with dense bubbles or hand-marbled streaks. The works now at the Whitney represent a simplification of this process. The scenes are photographed only twice: the first time captures the still life, and the second is shot through a spotlit latex screen to produce the craquelure on the image’s surface. Nasatir does not physically alter these prints. The surreal effects happen entirely in the camera.

Nasatir’s photographs reward extended viewing—it takes time to make spatial sense of the scenes pictured. A careful observer can almost piece together how each image is made: for example, a puzzling reflection in Blue Girl, created by an aquamarine mirror that duplicates an image without reversing it horizontally, implies that a second mirror faces the scene, set up outside of the photograph’s frame. Nasatir extends the moment between apprehending an image and comprehending it; she seems unwilling to let it end.

This evasiveness counters photography’s tendency toward rapid commodification and consumption of images, especially representations of the human figure put to commercial use, or circulating without consent of their subjects in the age of social media. It’s no mistake that bodies appear only in allusions and fragments in these photographs: the glove in Hitchhiker, a single doll’s leg in The Green Room, and a wooden hand manikin in Conductor, Candy, and Half-Heart. How can a photograph reveal enough to communicate meaning, but not so much as to violate its subject? Or, as Nasatir asked in an interview in Document, “How much of a figure needs to be shown for something to register as human?” This question produces restive, rich, and challengingly indeterminate works—there is no authoritative solution to the riddle, but parsing what the photographs reveal and occlude prompts you to imagine your own.

“Willa Nasatir” is at the Whitney Museum through October 1.

Erin Schwartz is a writer based in New York.

Teju Cole: At the Border of the Visible

“Blind Spot” is a record of Cole’s extensive travels between 2011 and 2017, but it is less concerned with his own itinerary than with the paths of others.