Instantly recognizable images dominate “America’s Cool Modernism: O’Keeffe to Hopper,” the surprisingly arresting new show at the Ashmolean Museum in Oxford: Charles Demuth’s magnetic I Saw the Figure Five in Gold (1928), inspired by his friend William Carlos Williams’s poem The Great Figure, in which a fire truck speeds through the streets of New York one rainy night; Georgia O’Keeffe’s breathtakingly chilly East River from the Shelton Hotel (1928), the cool, icy blue of the water slicing through the middle of the canvas, separating the snow-topped roofs in the foreground from the smoke-clouded factory chimneys in the distance; three large Edward Hopper oils, From Williamsburg Bridge (1928), Manhattan Bridge Loop (1928), and Dawn in Pennsylvania (1942), not his most famous work, but nevertheless immediately identifiable.

But there’s also a familiarity to the lesser-known works adorning the walls. Not because British audiences have seen them before; they haven’t—nearly half of the eighty-odd paintings, photographs, and prints in this relatively small, three-room show have never previously been exhibited in the UK, and the yawning gap between the John Singer Sargents and the Jackson Pollocks in the Tate’s collections has left us sorely deprived. All the same, we know exactly what we’re looking at: representations of the mythologies of an “America” that has long inhabited the popular global imagination, from the towering structures of the archetypal modern metropolis to the rustic barns, uniform fields of corn, and white picket fences of prairie farmland.

The first room is an eclectic mix of experiments in style and medium. A couple of unexpected gems stand out—two paintings by artists not known as painters at all: the poet E.E. Cummings’s Sound (1919), a riotous study in oils of brightly colored geometric shapes, in which a curve suggests the elegant line of a guitar; and the photographer Edward Steichen’s Le Tournesol (The Sunflower) (circa 1920), which I initially mistook for a gramophone. 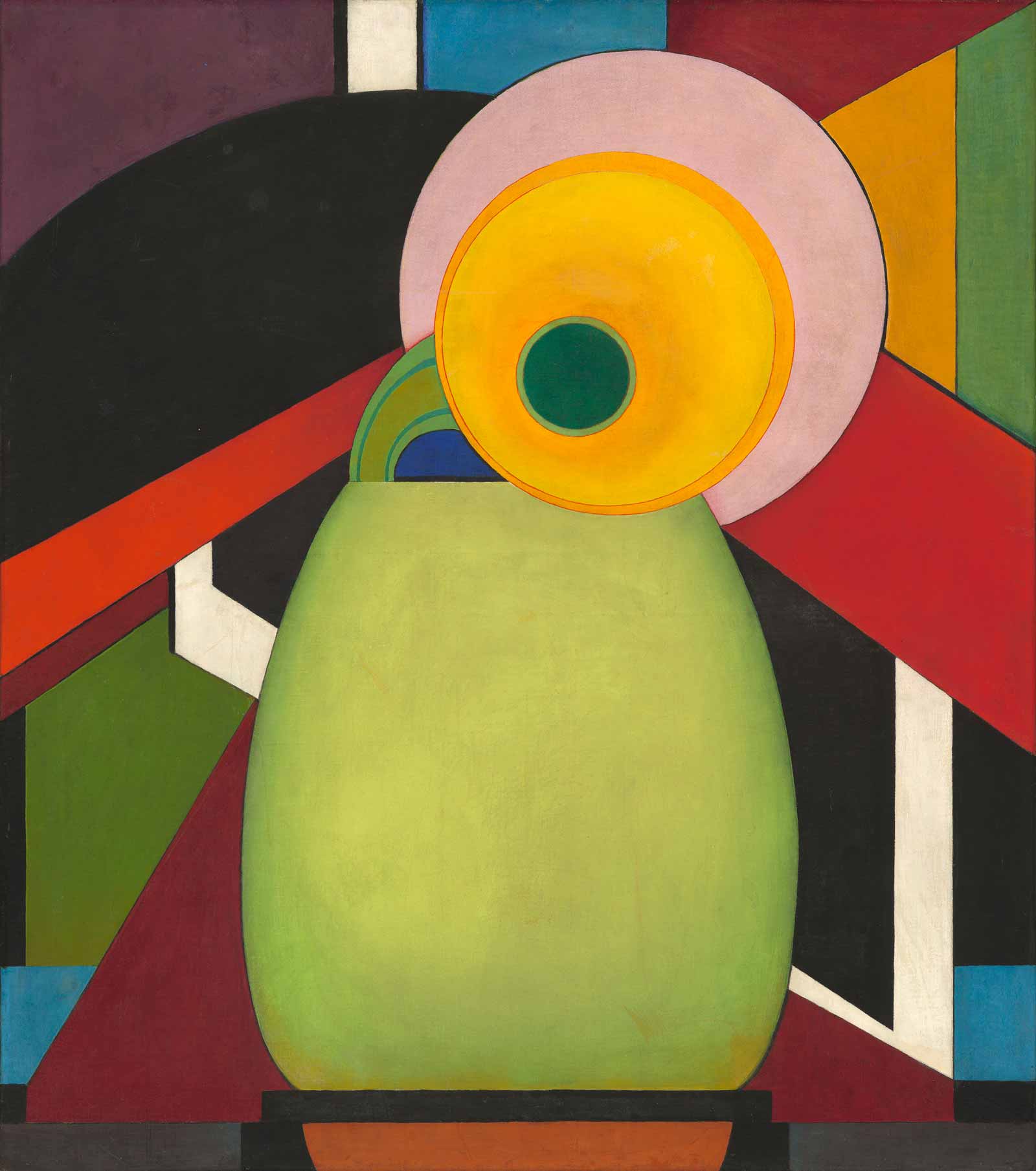 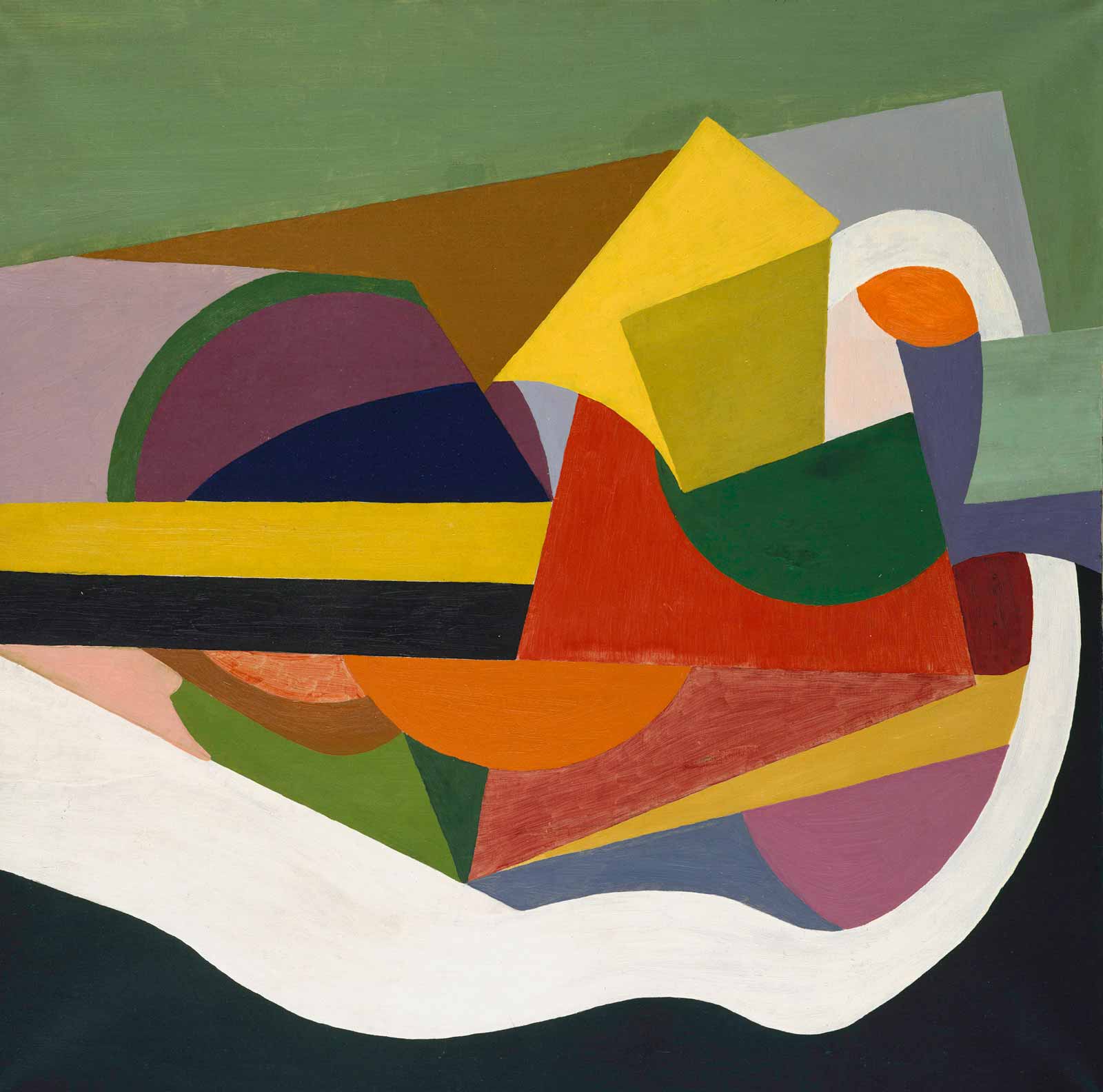 The second room is the beating heart—or, in this case, the mechanized pump—of the exhibition, where industrialization in all shapes and forms takes center stage. The futuristic-looking distribution plant in Charles Sheeler’s Water (1945) is an Art Deco-industrialist structure of shining sheet metal and gleaming milled stone. Meanwhile, the warm, welcoming orange and umber tones of the brickwork in Niles Spencer’s angular, back-to-basics Erie Underpass (1949) are juxtaposed with pitch-black shadows. The synthetic, blue-toned light from the illuminated upper windows of George Ault’s striking Hoboken Factory (1932) mimics the natural tone of vestigial twilight in the smoke-stained sky at the top of the canvas. Samuel Margolies’s vertiginous etching of Manhattan, Man’s Canyon (1936), evokes claustrophobic terror in a Randian cityscape.

This emphasis on the machine-age modern continues into the final room with the bright colors and smooth lines of Ralston Crawford’s Smith Silo, Exton (1936–1937) and Buffalo Grain Elevators (1937), redolent of a paint-by-numbers exercise for a program of rural modernization. Even the stalks of corn in Grant Wood’s Fertility (1939) or the rolling fields in July Fifteenth (1938) give off the air of unbroken mass production. The exhibition then draws to a close with the series of Hoppers, leaving an impression of romanticized, cinematic urban solitude.

An education in the work produced by the precisionist artists of the 1920s through the 1940s, the “cool” of the exhibition’s title is a reference to both form and content. The images use sharp, well-defined lines and striking applications of pigment (whether as bold blocks of color or in arresting monochrome). They speak to a desire for a sanitized version of reality that tries to master the anxieties and ambivalences associated with modern life, a need more keenly felt in America, a country then synonymous with certain signifiers of modernity—industrial and technological development on an epic new scale in the form of dams, bridges, factories and skyscrapers—to a degree still alien to her European cousins. 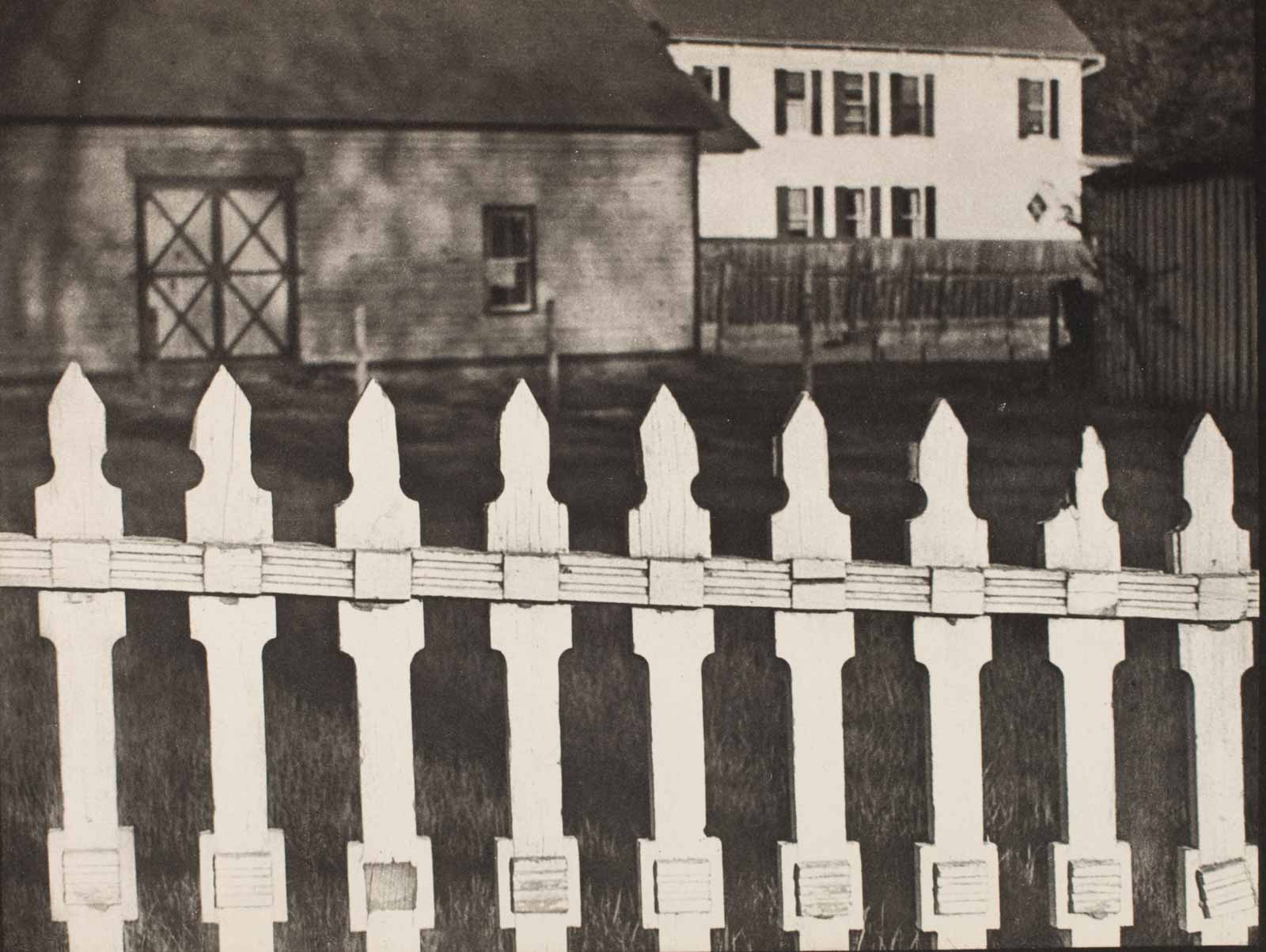 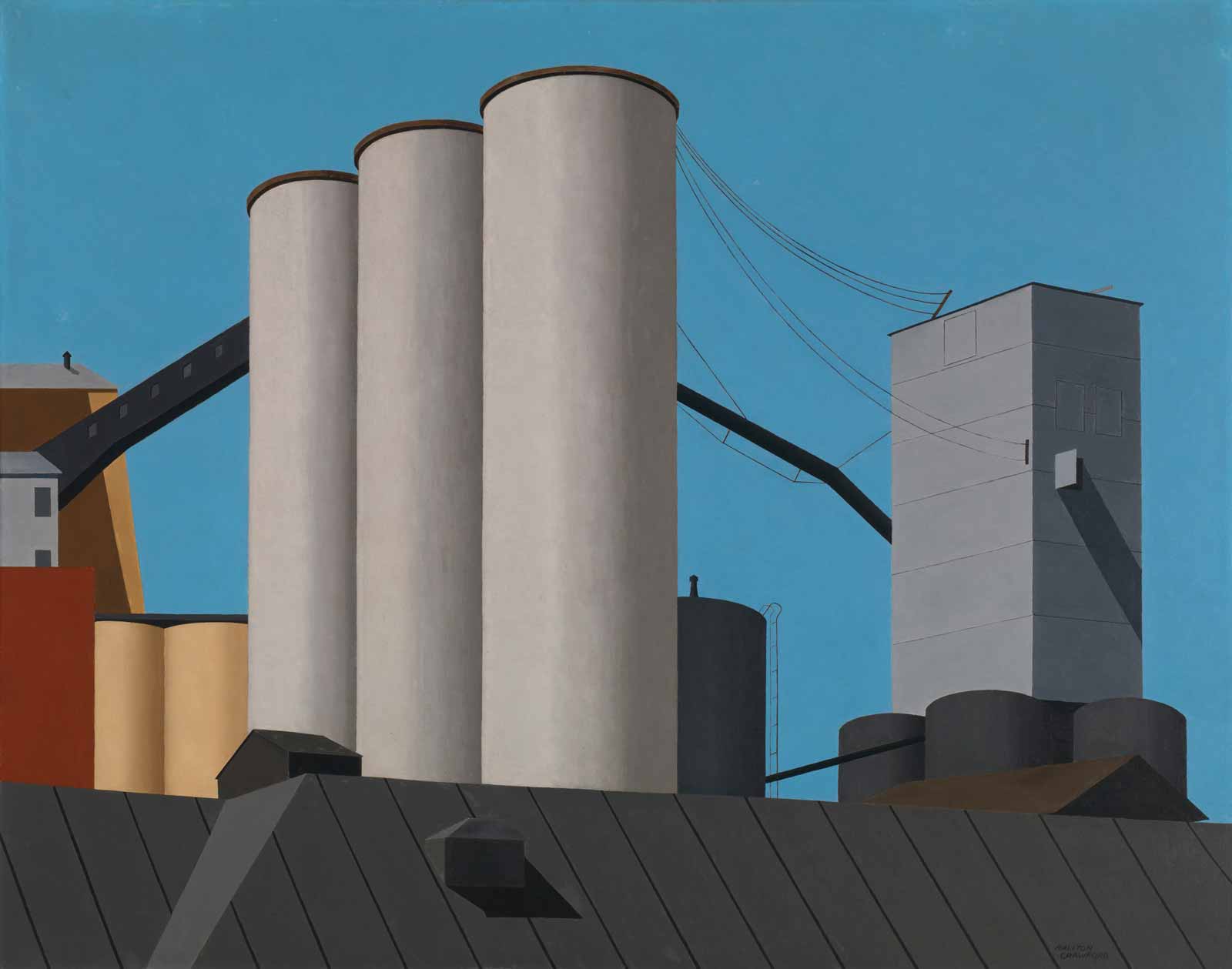 Strange then, or perhaps fitting, that human figures are so often absent in these scenes. They present a remarkably consistent vision of a country eerily devoid of its inhabitants: factories, mills, and water plants without workers, apartment blocks without tenants, cityscapes minus the bustling populace, farms without farmers. Endless images of man-made edifices reduced to hollow testaments to human endeavor and hard labor. It’s the realization of the American Dream without the mess and confusion of actual human life.

Even the exceptions in the show are so partial that they prove the rule. Indistinct figures teem, ant-like, along the sidewalks in Man’s Canyon. A ghost-like shape, more grayed-out absence than a definitive presence, dwarfed by a vast lattice of multicolored cogs and levers in Paul Kelpe’s Machinery (Abstract #2) (1933–1934). We see only the blacked-out silhouette of the car’s driver and passenger in Martin Lewis’s Which Way? (1932), the vehicle’s headlights illuminating a telegraph pole and a bank of snow beneath in an otherwise dark, deserted road—the flawlessness of the scene so suggestive of a photograph that the painting stopped me in my tracks. On the same wall, the figures in Hopper’s four noir-inspiring etchings—Night in the Park (1921), Night Shadows (1921), The Railroad (1922), and The Cat Boat (1922)—not to mention the solitary characters in two of his nearby oil paintings—the man all but hidden in shadow in Manhattan Bridge Loop (1928), and the lone inhabitant sat at one of the windows in the red-brick apartment building in From Williamsburg Bridge (1928)—remain similarly hard to make out and isolated in their anonymity. 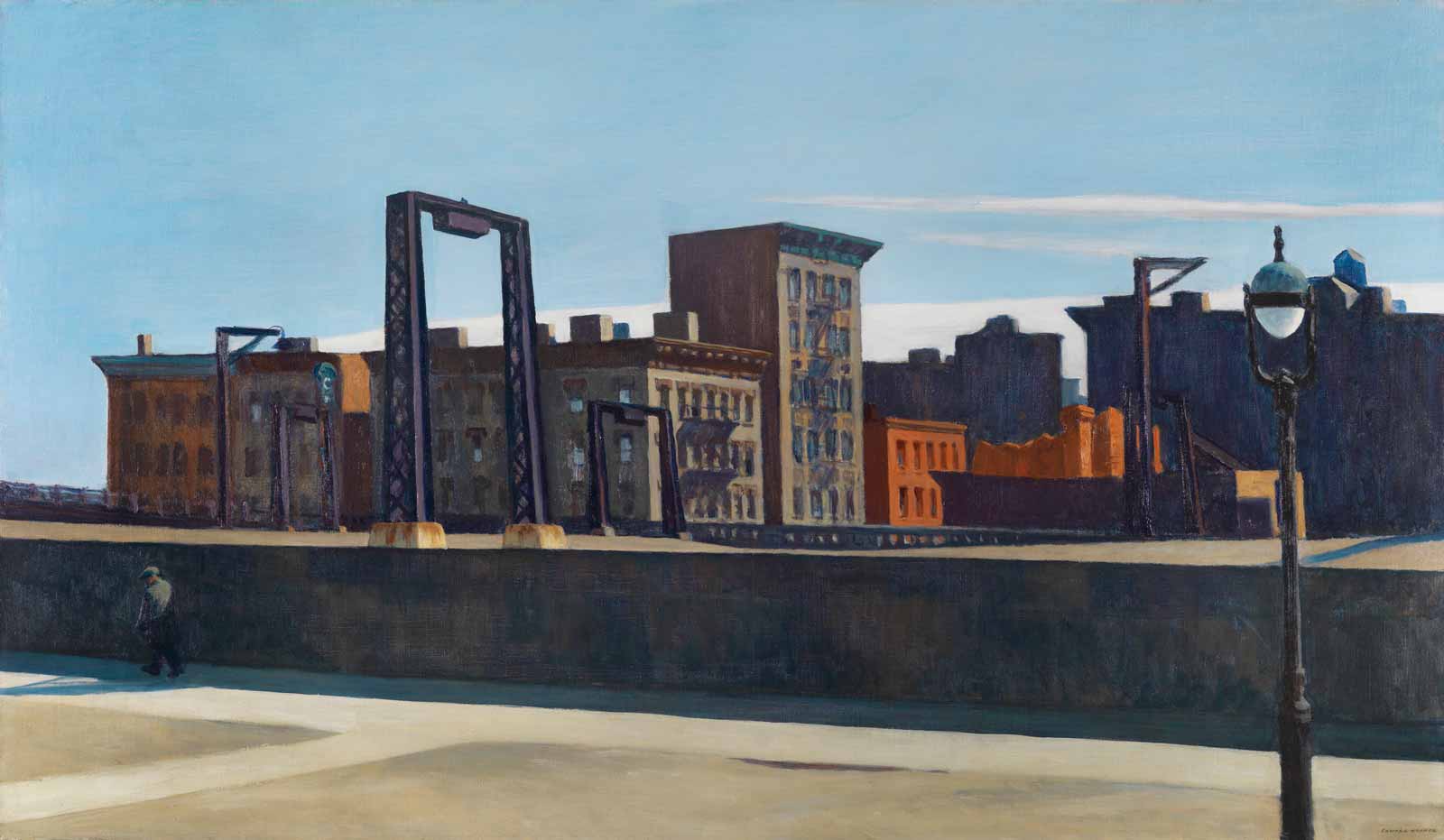 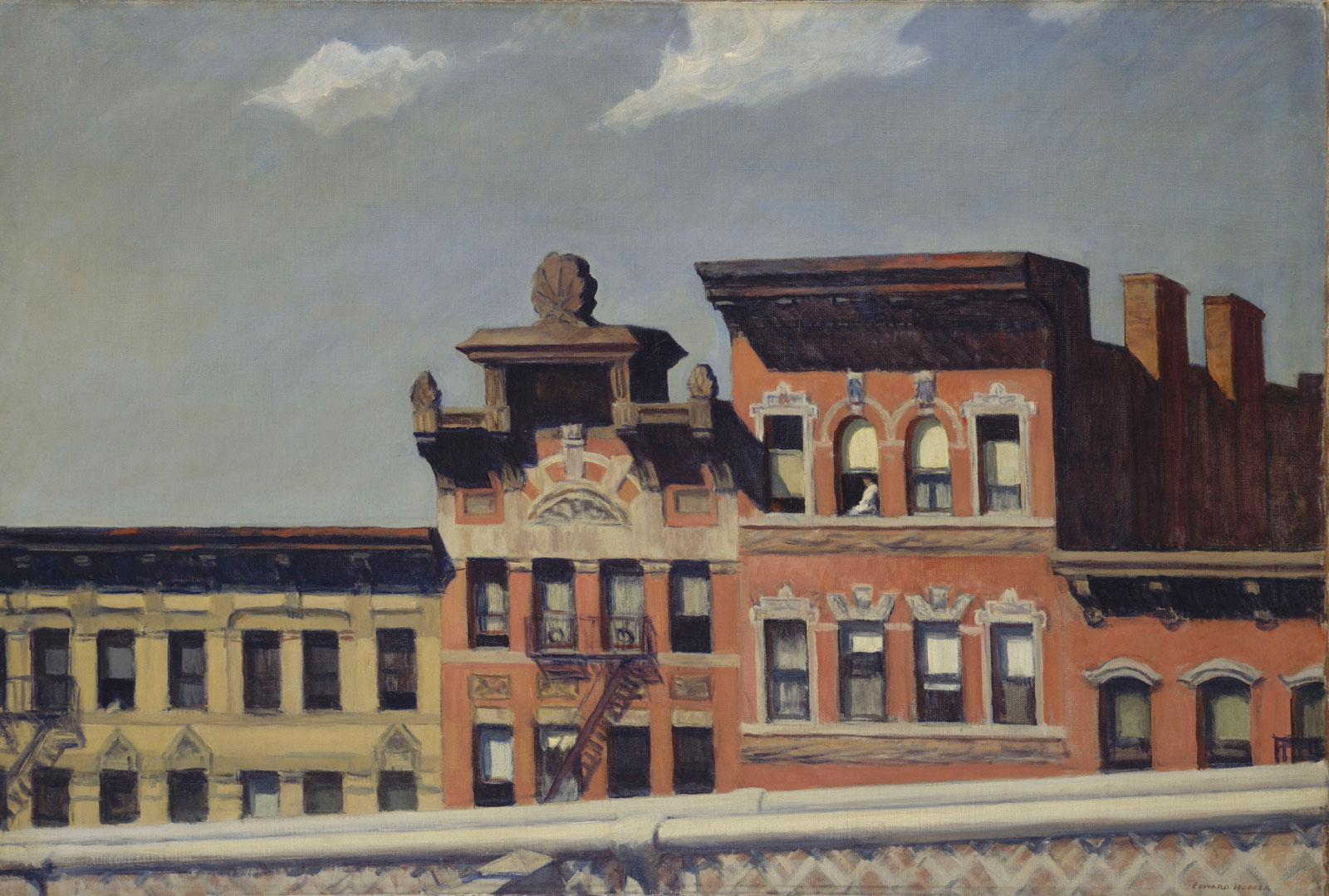 After such barrenness, the footage of hundreds of city workers streaming off the Staten Island ferry in Charles Sheeler and Paul Strand’s documentary Manhatta (1921), often regarded as the first American avant-garde film, which screens on repeat in the second room, seems like a scene from another world. Watching this meditation on the mechanization of urban space and life, those famous lines from T.S. Eliot’s masterpiece The Waste Land sprang to mind:

Unreal City,
Under the brown fog of a winter dawn,
A crowd flowed over London Bridge, so many,
I had not thought death had undone so many.

“America’s Cool Modernism: O’Keeffe to Hopper” is at the Ashmolean Museum through July 22.

“Cult of the Machine” tries to draw parallels between the simultaneously celebratory and anxious ethos that inspired Precisionism and present-day concerns about the impact of electronic technology on society.

The Waste Land blends Shakespeare, Ovid, Dante, Saint Augustine, and the Upanishads with the slang of the “unreal city.” The exhibition “Journeys with ‘The Waste Land’” tries, perhaps too hard, to embrace that multiplicity.

A new exhibition offers an opportunity to better understand what was radical about David Bomberg’s early work, and demonstrates how his decisive modernism lived on in later work.