There is a crack in everything
That’s how the light gets in
—Leonard Cohen, “Anthem”

Do the landscapes that we inhabit have a memory of us after we disappear? Does something of us remain caught in the branches, entangled with the grass? Do faces hold memories of their past and a hint of their future? These are some of the questions raised by a haunting exhibition of photographs by Sally Mann, which demonstrates that beauty can exist in the ruins of a destroyed building, a landscape overgrown with weeds, a familiar body made foreign by illness.

With over a hundred photographs, “Sally Mann: A Thousand Crossings” is organized in five sections—Family, The Land, Last Measure, Abide With Me, and What Remains—each series seeming to contain the next hidden within it, and building upon it. Mann’s photographs of the American South move from the individual to the historical and back again, from the landscape to the people who inhabit it, to create a portrait of the fraught, striking, and evocative geography that is Mann’s home.

In a short film accompanying the exhibition, intense concentration lights Mann’s eyes, framed by round metal glasses. She has tied up her mane of gray hair. Like a cook or an alchemist involved in a mysterious process of transformation, she pours collodion, a syrup-like substance, from a beaker onto a rectangle of glass, then coats the glass with silver salts. Since the late 1990s, Mann has revived this nineteenth-century technique used by Civil War photographers. Given her preoccupation with the Southern landscape and the Civil War battlefields, it seems fitting that collodion was also used to treat the Civil War soldiers’ wounds: it is almost as if Mann wanted the collodion to bind her images as well.

Mann embraces the accidental, what she calls the intervention of “the angel of uncertainty.” She does not polish the glass and welcomes its irregularities; she pours the collodion quickly, and before it dries, she lets it pool in irregular waves. Pieces of dust and even insects settle into it, and the camera’s faulty lens lets in streaks of light. On the finished prints, these defects will look like drops of rain, constellations, and shooting stars. The section of glass untouched by the collodion could become a streak with an eerie blue tinge, like a narrow piece of sky between two clouds during a stormy day. One senses that Mann has carefully considered her camera’s placement. Her compositions are classical and strongly anchored, often by a central vanishing point. 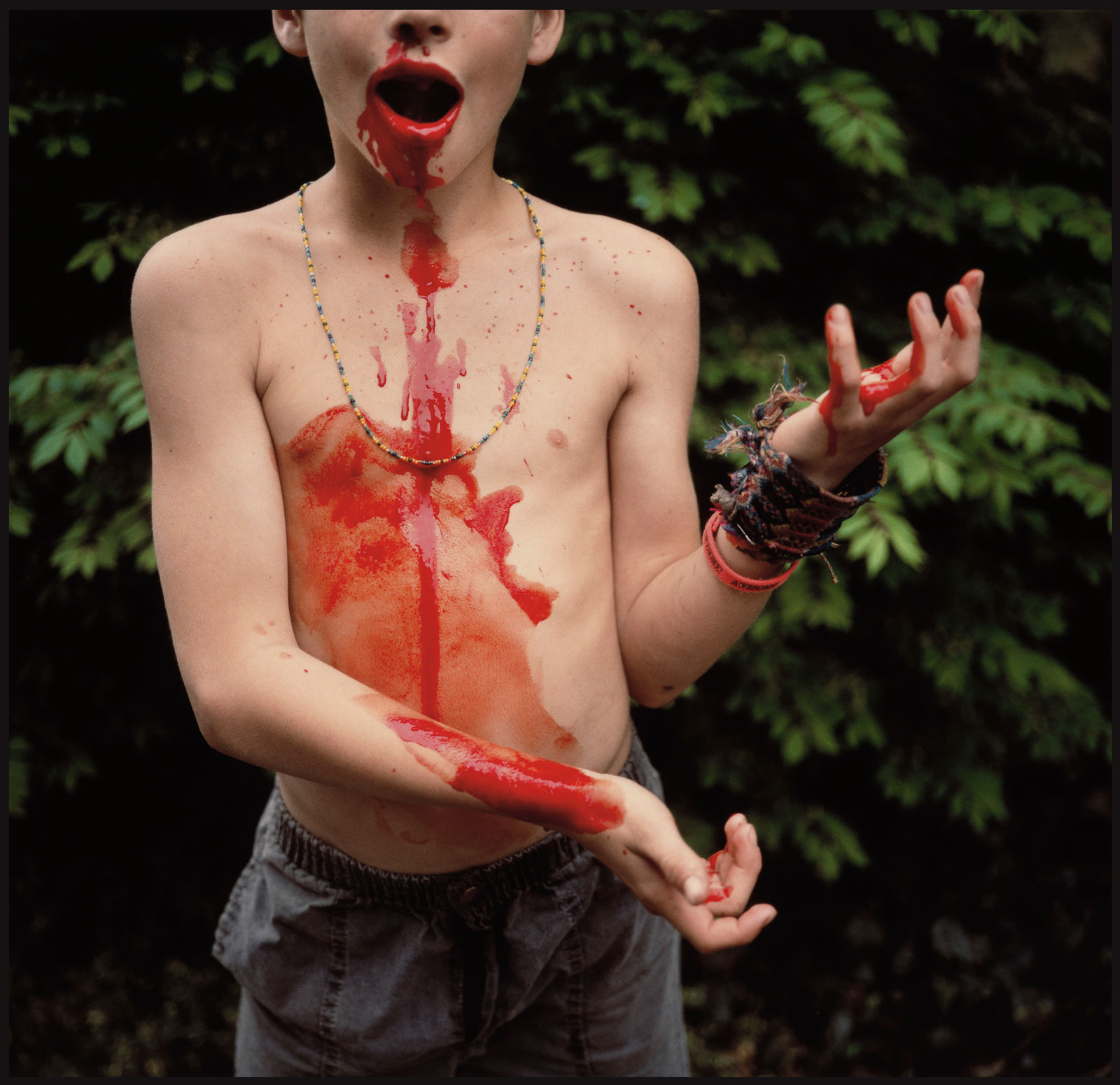 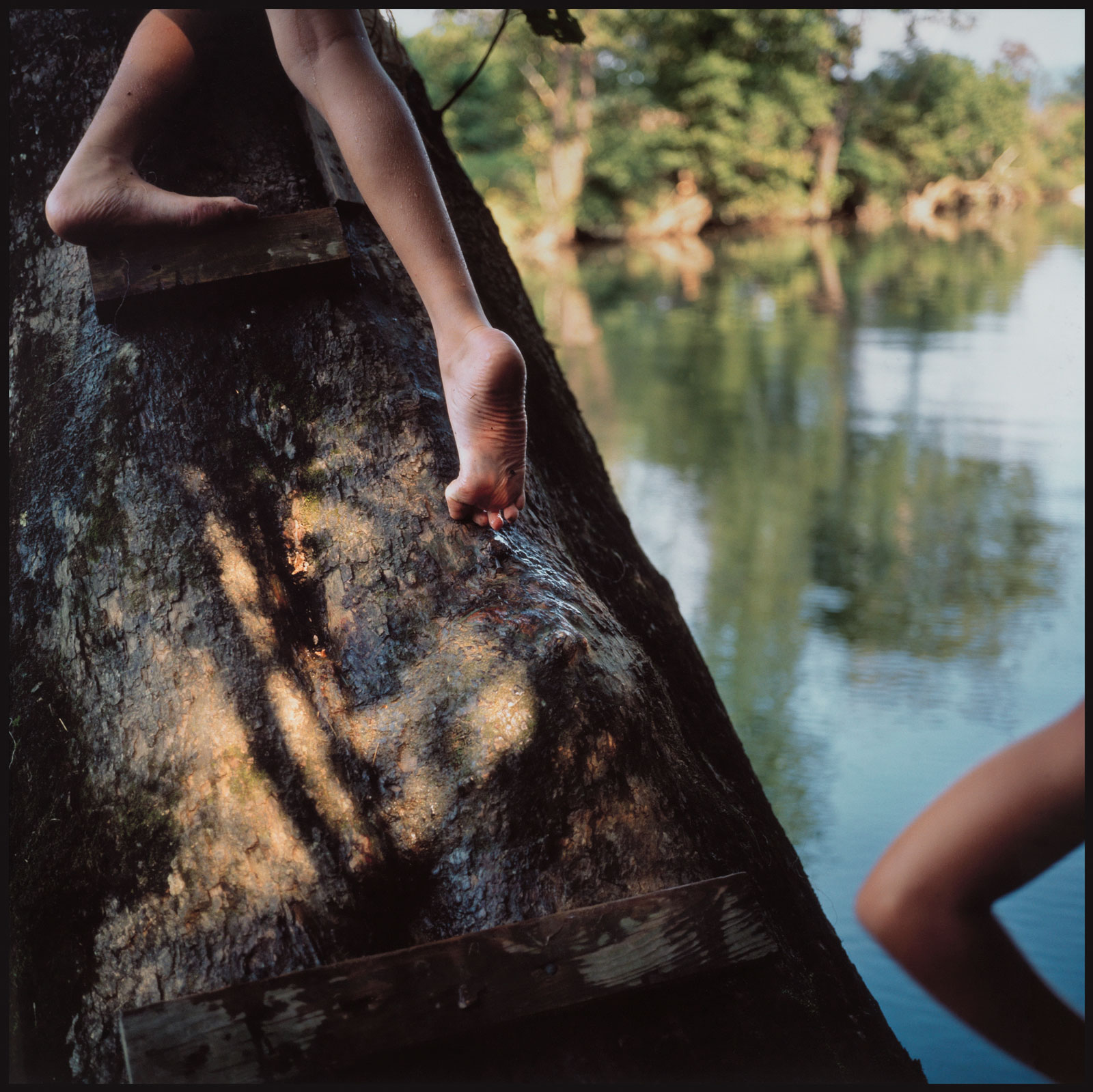 This mix of rigor and chance has always been part of Sally Mann’s photographs, as have her honesty and courage, her indifference to trends and the opinions of others. Mann is perhaps most widely known for her 1992 series “Immediate Family,” which included images of her three young children, Emmett, Jessie, and Virginia, at their family’s cabin, swimming, dressing up, vamping for the camera, and featured the small incidents of everyday life—nosebleeds, bug bites, cuts, and scrapes. Mostly because the children often appeared naked and vulnerable thanks to these mishaps—for instance, Jesse’s face swollen from insect bites or Virginia’s wet bed—the photographs were met with hostility and even accusations of child abuse. As Mann explained, though, the moments portrayed in the photographs were often reenacted: “These are not my children; they are figures on silvery paper slivered out of time,” she wrote in a 2015 New York Times piece, adding that “even the children understood this distinction. Once, Jessie, who was 9 or 10 at the time, was trying on dresses to wear to a gallery opening of the family pictures in New York. It was spring, and one dress was sleeveless. When Jessie raised her arms, she realized that her chest was visible through the oversize armholes. She tossed that dress aside, and a friend remarked with some perplexity: ‘Jessie, I don’t get it. Why on earth would you care if someone can see your chest through the armholes when you are going to be in a room with a bunch of pictures that show that same bare chest?’ Jessie was perplexed at the friend’s reaction: ‘Yes, but that is not my chest. Those are photographs.’”

Mann’s images counter a saccharine, naive notion of childhood and show how children’s lives can be fraught with violence, shame, confusion, and fear, as well as joy and grace. But as Mann’s children grew older, they seemed to become smaller, receding into the distance of her photographs as the landscape grew around them. As she explained in a 1994 letter to a friend:

What has happened is that I have been ambushed by my backgrounds. They beckon me with just the right look of dispossession, the unassertiveness of the peripheral.… I like to think that these are the kind of pictures Eugène Atget would have gotten if he had pivoted his camera away from the monuments and toward the unalluring underbrush.

Born in Lexington, Virginia, Sally Mann had lived in Lexington most of her life and identified as a Southerner. By 1998, she had traveled to Alabama, Louisiana, and Mississippi. In a 2016 interview, she explained, “For me, the Deep South was haunted by the souls of the millions of African Americans who built that part of the country with their hands and with the sweat and blood of their backs.” The landscape that Mann observed seemed “both homeland and graveyard, refuge and battleground,” reports the exhibition catalog. The misty, romantic tableaux of the Southern landscape that we might expect—lush forests and rivers, the ruins of grand colonial houses, their columns covered in wild ivy—was only one perspective. Mann seems to indict such images as merely conventional with her photograph of the boat lock and Tallahatchie River near Money, in the Mississippi Delta. Into it, the body of Emmett Till, the boy murdered by white men after he was accused of flirting with a white woman, was thrown in 1955, Mann writes, “naked, blind, beaten, a cotton gin fan lashed with barbed wire to his neck.” The river view would seem banal were it not for the branch that reaches over the water like a twisted hand, and the single shaft of light plunging from the lock like a blade. 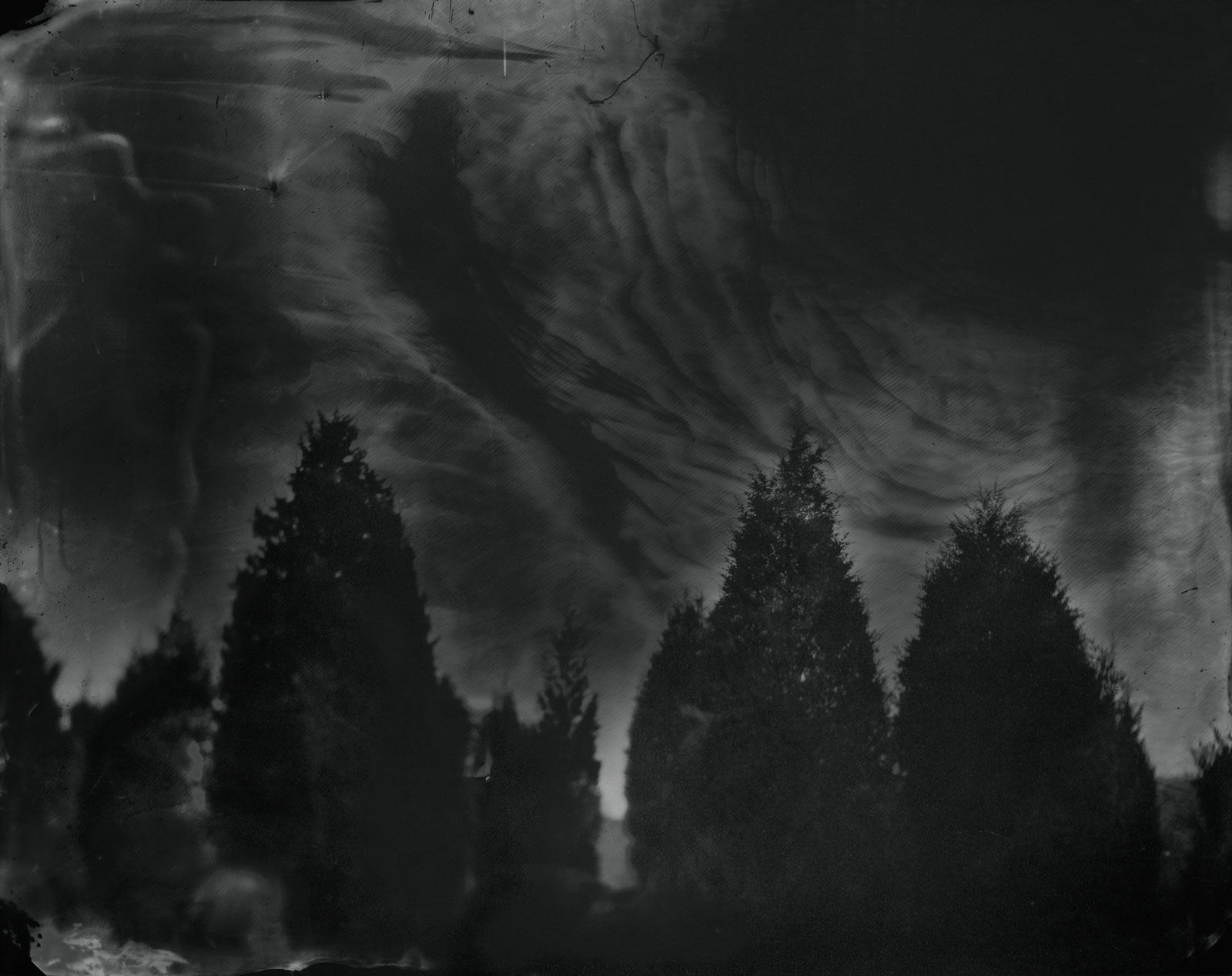 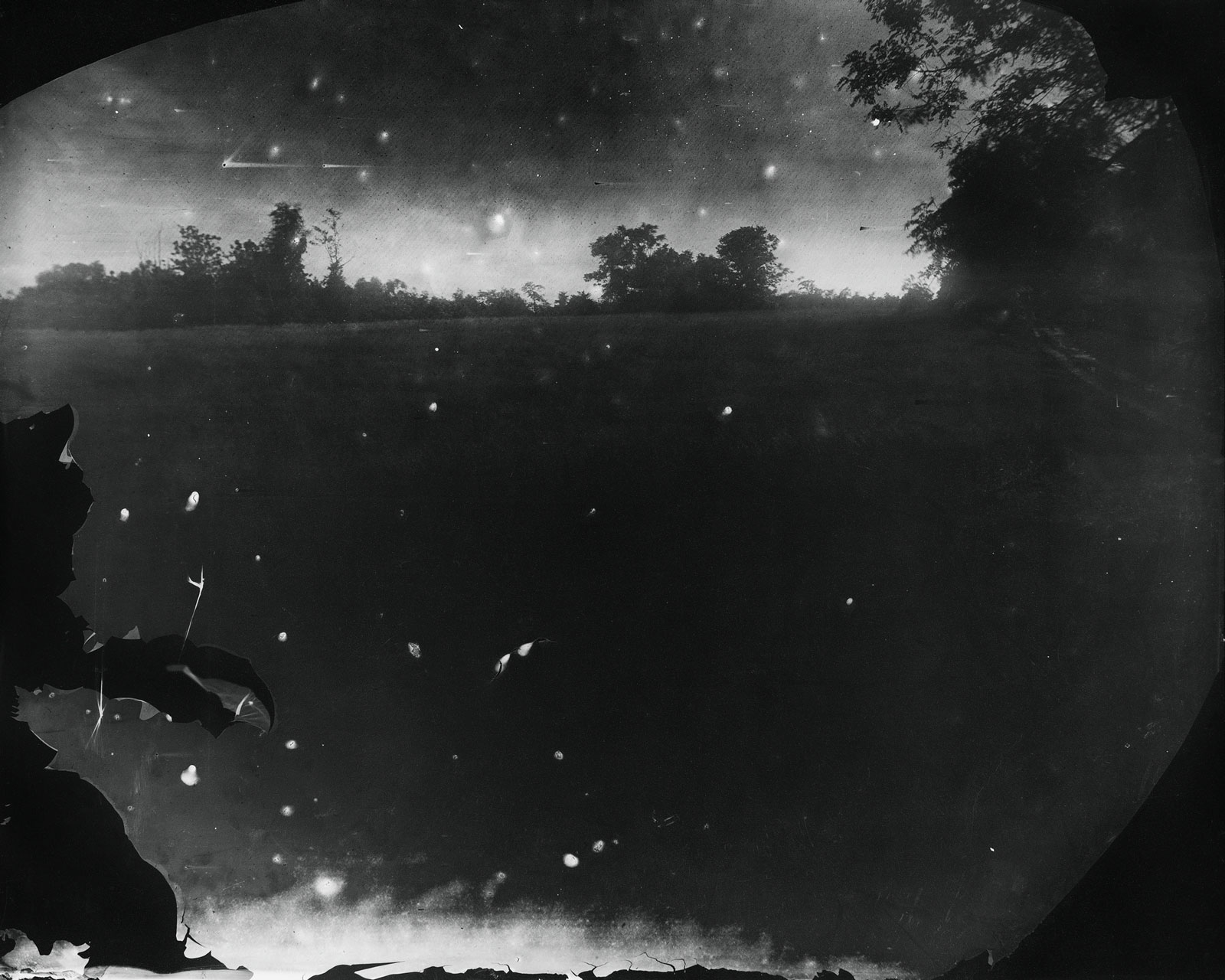 In the next room, Mann’s subjects are the sites of Civil War battles: Antietam, Manassas, Fredericksburg, and Cold Harbor, which she started photographing in 2000. Mann used antique, uncoated lenses like those of the Civil War photographers, but her aim was not documentation, and she used soft focus and low exposures. These oversize views—sometimes fifty inches wide—dark as mezzotint etchings, are infused with fog or smoke wafting up into a starry sky; the land’s veined rivers, broken stems of corn, a line of cedar trees, are silhouetted against the last light of day with a black sun sinking into the horizon. These images are almost abstract yet highly evocative, and among the strongest in the exhibition. 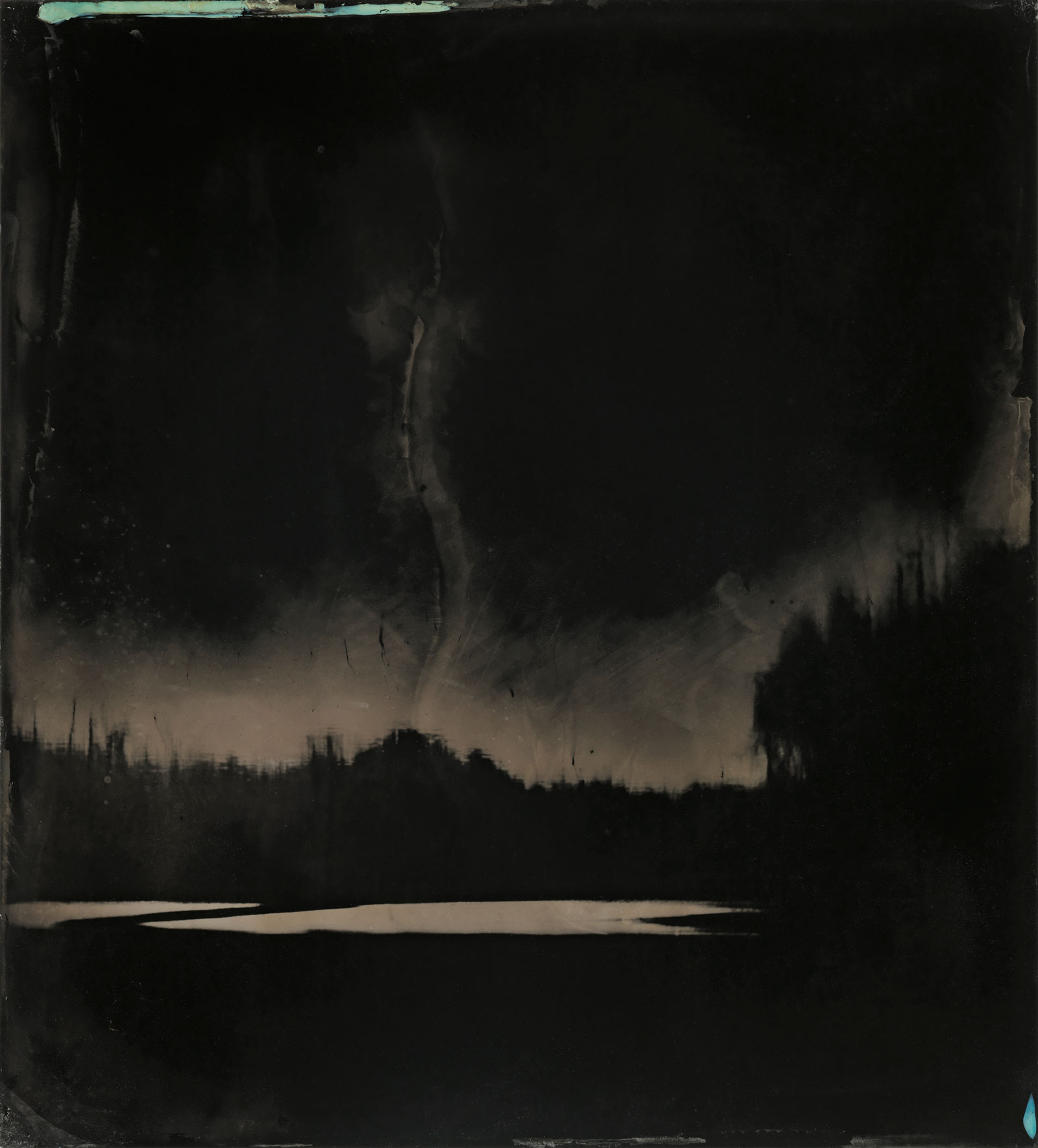 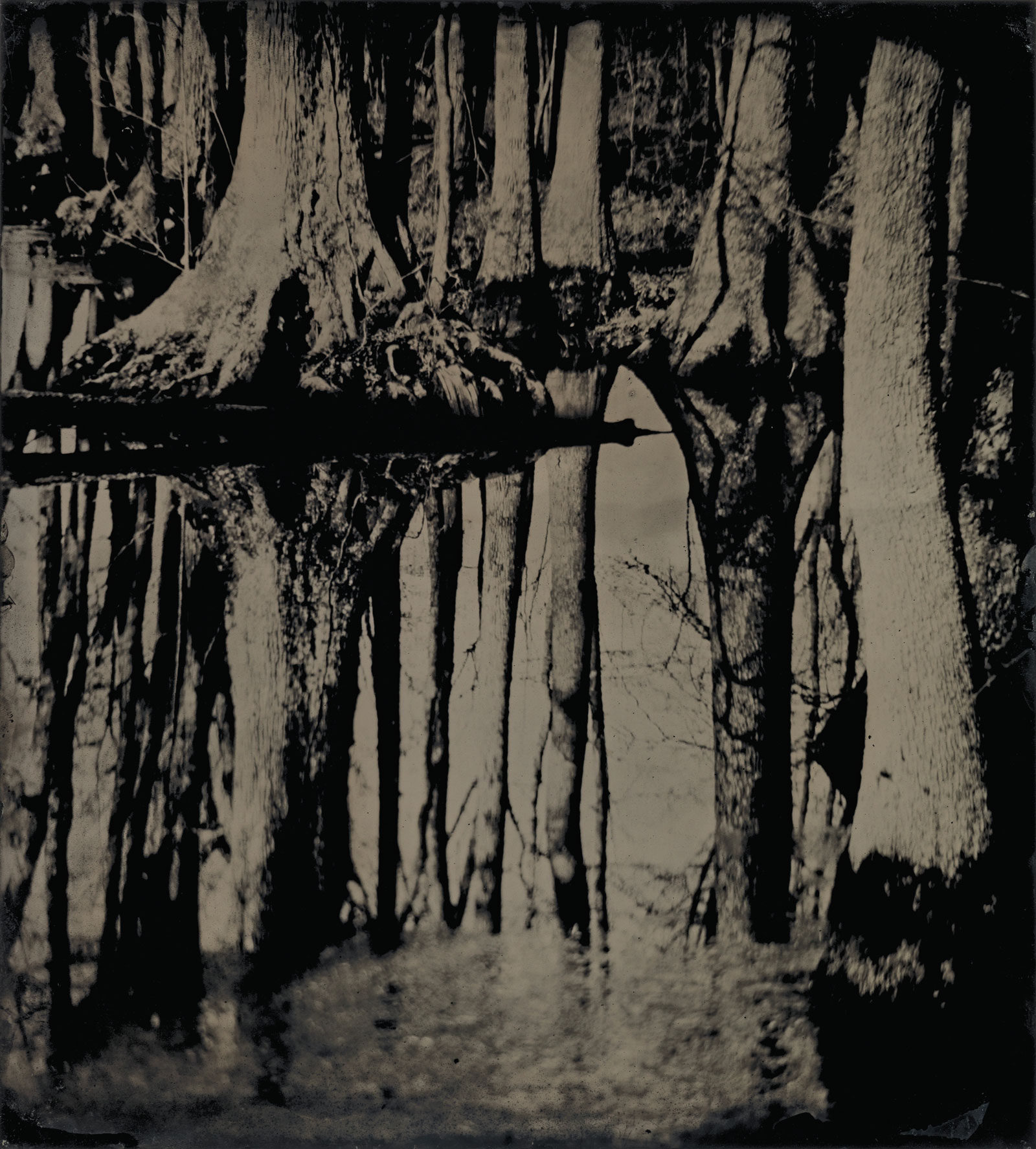 In the series “Blackwater” (2008–2012), Mann works with black on black, choosing the small, intimate format of the historical tintype process, which involves creating a direct positive image onto a sheet of aluminum coated with a dark lacquer. With their dull, silvery gleam, these intimate images of swamp waters, broken trees, and overcast skies have a tactile and magical effect, where the distinction between objects and their reflections in water is blurred.

Blackwater was an area of southwestern Virginia where freed and escaped slaves had sought refuge. In her series “Abide With Me,” Mann leaves behind landscape and returns to portraiture, this time of people to whom she is not closely related; she photographs black men whose ancestors were slaves: Janssen’s crossed fingers, Ronald’s slumbering body, shot with a foreshortened angle, Stephen’s blurry profile or Anton’s silhouette against full sun. Photographs of Gee-Gee, a widowed black woman who helped Mann to raise her children while also raising six children of her own, bring us back to Mann’s family. Gee-Gee’s presence, Mann admits, was taken for granted. As she revisited the centrality of Gee-Gee in the lives of her family members, Mann comes to better understand how racism had shaped Gee-Gee’s experience—but also, as Mann explains in her memoir, Hold Still (2015), “all that I had not seen, had not known, and had not asked.” Especially eloquent is The Two Virginias #3, which shows Gee-Gee’s callused and worn feet juxtaposed with those of six-year-old Virginia, Sally Mann’s daughter—small, white, and dangling on either side of Gee-Gee’s legs.

The exhibition ends with the series “What Remains,” which comprises an extraordinary series of photographs of Mann’s husband, Larry, who was struck with muscular dystrophy at the age of forty-eight. In 2008, she made his portrait as Hephaestus, the blacksmith for the ancient Greek gods, where half his body seems consumed by fire. Larry was “melting,” losing muscle mass in his body, and, like Hephaestus, becoming lame. But the god was a master of fire, while a fire seemed to be destroying Larry from the inside. In Speak, Memory (2008)—the title borrowed from Vladimir Nabokov’s celebrated memoir —a shaft of light seems to impale his head. Both unforgettable images contain a sense of unflinching honesty, tenderness, mystery, and profound sadness. Full-face, frontal collodion portraits of Mann’s children now as adults show their features blurred, almost dissolving in close-up, as if seen in the speckled surface of a very old mirror—no longer the “children in a photograph,” but seeming to refer to the past with a look, a nose that’s been grown into, a smile, an incipient wrinkle. 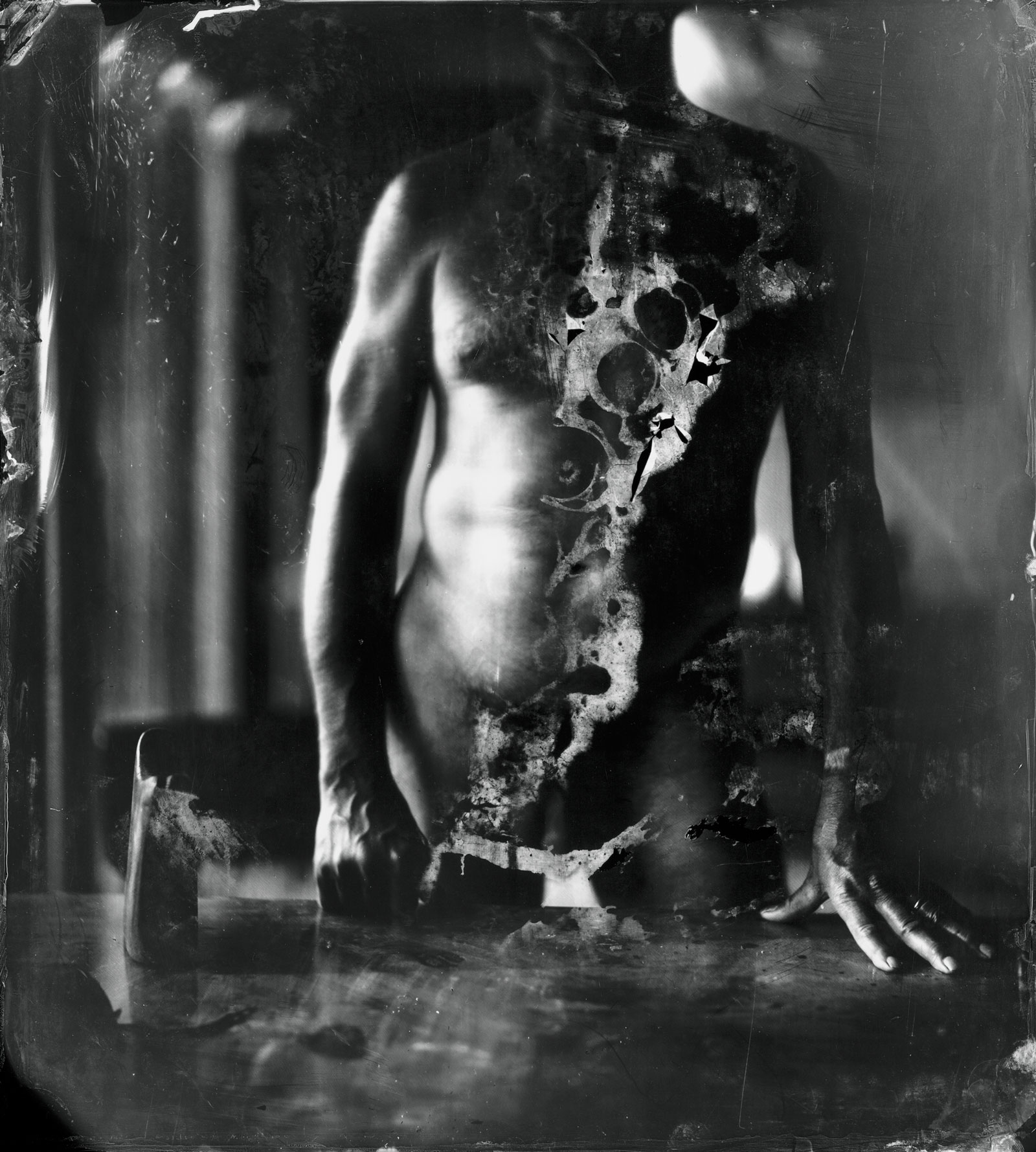 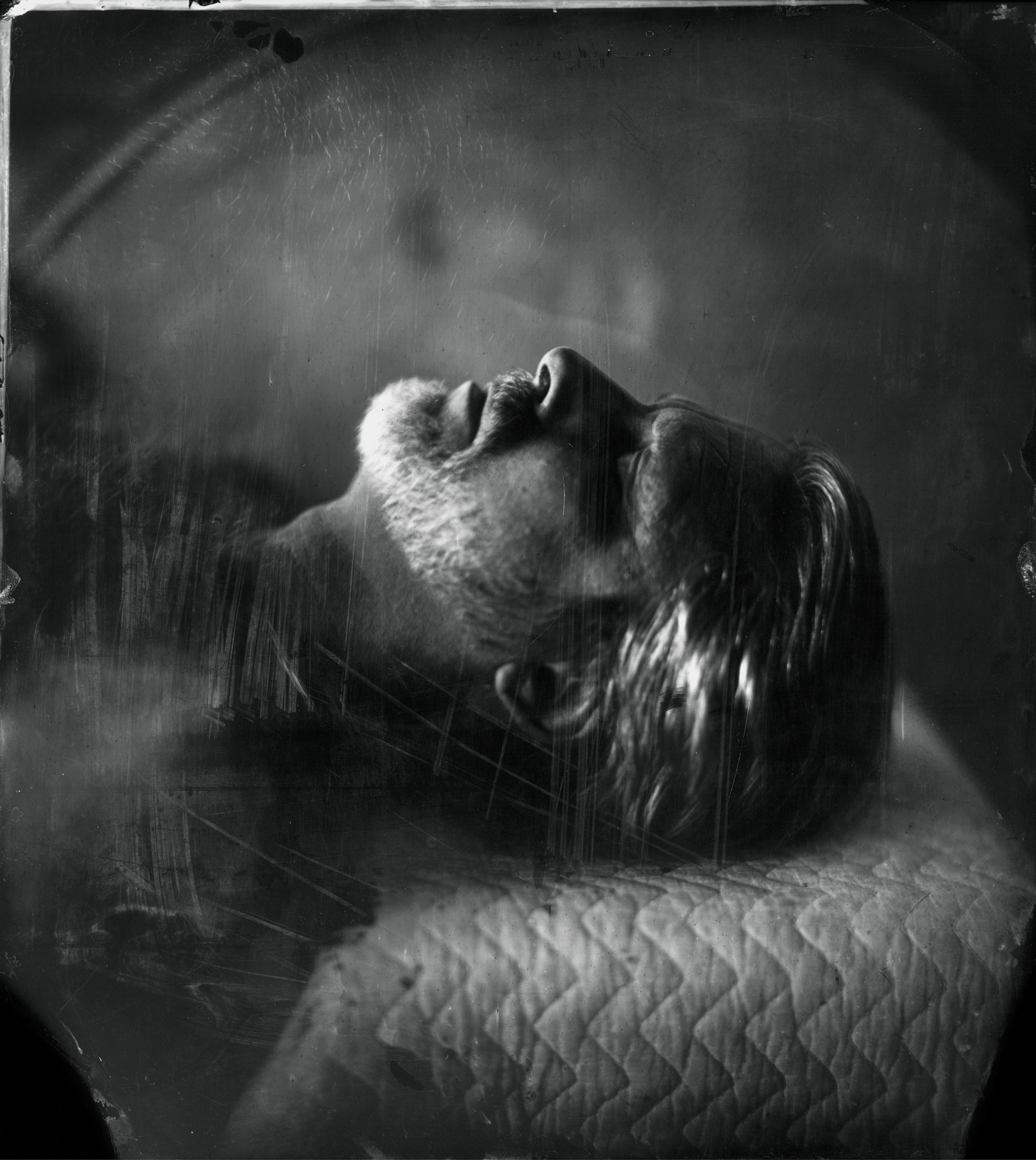 Mann’s poetic and profound photographs bear the gift to their viewer of traveling the arc of time. Once we have seen these adult faces, we will look again at their portraits as children. But we will see them differently, as precious, singular visions, remembering the words of poet W.S. Merwin, who said that each moment in our lives is “unrepeatable as a cloud.”

“Sally Mann: A Thousand Crossings” was at the National Gallery of Art in Washington, D.C., and the Peabody Essex Museum in Salem, Massachusetts, and will be at the J. Paul Getty Museum in Los Angeles from November 16 through February 10, 2019, followed by the Museum of Fine Arts, Houston, the Jeu de Paume in Paris, and the High Museum of Art in Atlanta.

Paris Through the Eyes of Willy Ronis

In France, Willy Ronis’s photography is much loved, with its focus on ordinary people and ordinary life, its sense of humanity, empathy, and grace.

The Family of Mann

Although Alvar Aalto first won worldwide attention in the early 1930s as a leading exponent of the International Style—a reductive form of modern architecture proposed as equally applicable anywhere on the planet—his more expressive, site-specific work from the mid-Thirties onward marked him as a regional designer in the best sense,…