To be an immigrant in America is to wait. This goes double for the millions of immigrants who have found themselves at the sour end of the Immigrations and Customs Enforcement (ICE) bureaucracy—and triple in the age of Trump. If you are an immigrant in the process of deportation proceedings, you must wait for your Master Calendar, on which a bureaucrat will assign you to a check-in date several months into the future. At this check-in, you may win several more months of anxious waiting—or disappear into a detention center, where you will wait for a one-way plane ride to a country you may no longer know. And if, for instance, your paperwork is straight but, twenty years ago, you jumped a turnstile or got into a barfight, then ICE has a mandate to hunt you down. Once snatched, you, too, will wait in a detention center, losing your job, your apartment, and possibly your health, while the months pass until a judge grants you a bond hearing. Then, you will appear in court—in chains or via video link—and learn how many thousands of dollars your family must pay for you to have the privilege of waiting outside a cage.

While you wait, though, New Sanctuary has made the commitment to wait with you.

Founded in 2007, the New Sanctuary Coalition of New York City is “an interfaith network of congregations, organizations, and individuals” that “stands publicly in solidarity with families and communities resisting detention and deportation.” In 2018, the group made headlines when ICE arrested two of its leaders, immigrants Ravi Ragbir and Jean Montrevil. ICE quickly deported Montrevil to Haiti. Through street protests and the advocacy of sympathetic politicians, New Sanctuary forced ICE to free Ragbir. If you have walked by City Hall in Lower Manhattan late some Thursday morning, you may have seen the group’s Jericho Walk—a weekly, silent march around the ICE headquarters at 26 Federal Plaza—but most of its work is more quotidian. The group offers transport to doctors’ appointments, posts bond for people, runs a legal clinic, writes letters of support, and sends staff and volunteers to sit quietly beside immigrants at ICE facilities every weekday as they go through the interminable waiting to find out their futures.

I began to volunteer occasionally with New Sanctuary shortly after Trump’s election. Each hearing was a variation on a theme. On a weekday morning around 8 AM, the volunteers group would gather at a deli near either 26 Federal Plaza or 201 Varick Street. Because of the office-hours timing, the volunteers were mostly retirees. Sometimes, nervous immigrants—“friends,” in New Sanctuary parlance—would show up, and volunteers would walk them through the labyrinthine buildings, help them find their names on dockets strewn across multiple floors, wait in line beside them, and call their families if ICE moved to detain them that day. Other times, the immigrants were already detained, and, at their request, New Sanctuary showed up to their bond hearings both to provide moral support and to prove their links to the community

Many volunteers were, like me, driven by a desire to be useful in the face of helplessness. “What am I going to do? Yell at The New York Times or MSNBC all day?” one woman asked, as we waited in line for the metal detector at the public entrance to 201 Varick in early January. “I do what I can. And what I can do is take the subway to court and show up.” She considered herself a little person, she told me, but when little people got together and organized, they had power. She cited Tahrir Square, of Egypt’s 2011 revolution.

“Immigrants are scapegoated to a degree that I cannot sit at home,” said another volunteer, a former magazine writer.

Our group of ten filed into the waiting room. At 201 Varick, the immigrant whose hearing we were attending would not get to see us: since June’s Occupy ICE protests, ICE has refused to take detained immigrants to their bond hearings in person, citing the protesters’ raucous chants as threats to the ICE officers’ safety. Instead, immigrants would have to attend their hearings via a glitchy video link. Occupy ICE has come to seem merely a pretext—although the protests have been over for seven months, ICE has not resumed in-person hearings. A New Sanctuary organizer told me that the agency had been trying to move to video hearings for years, judging that the lack of direct human contact will reduce the effect of an immigrant’s emotional appeal and make the hearings more impersonal, rote, and ICE-friendly in outcome.

We sat and waited. “Waiting is our main activity,” Jerry, the group leader, told me. After an hour, Jerry learned that the immigrant whose bond hearing we had planned to attend was not on the docket. This happened often—twice that week. She wondered if it had something to do with the federal shutdown, but it was also true that confusion always reigned. 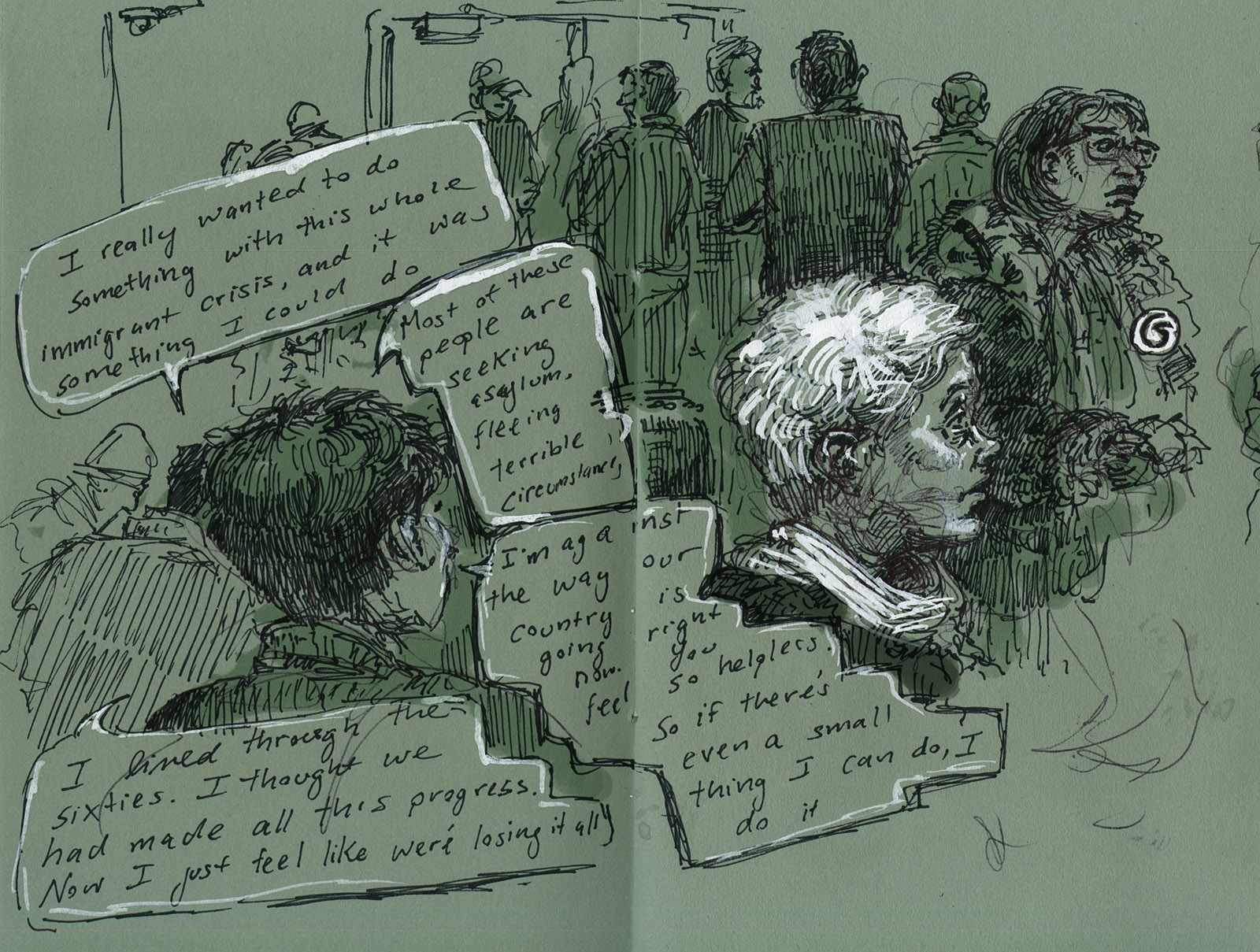 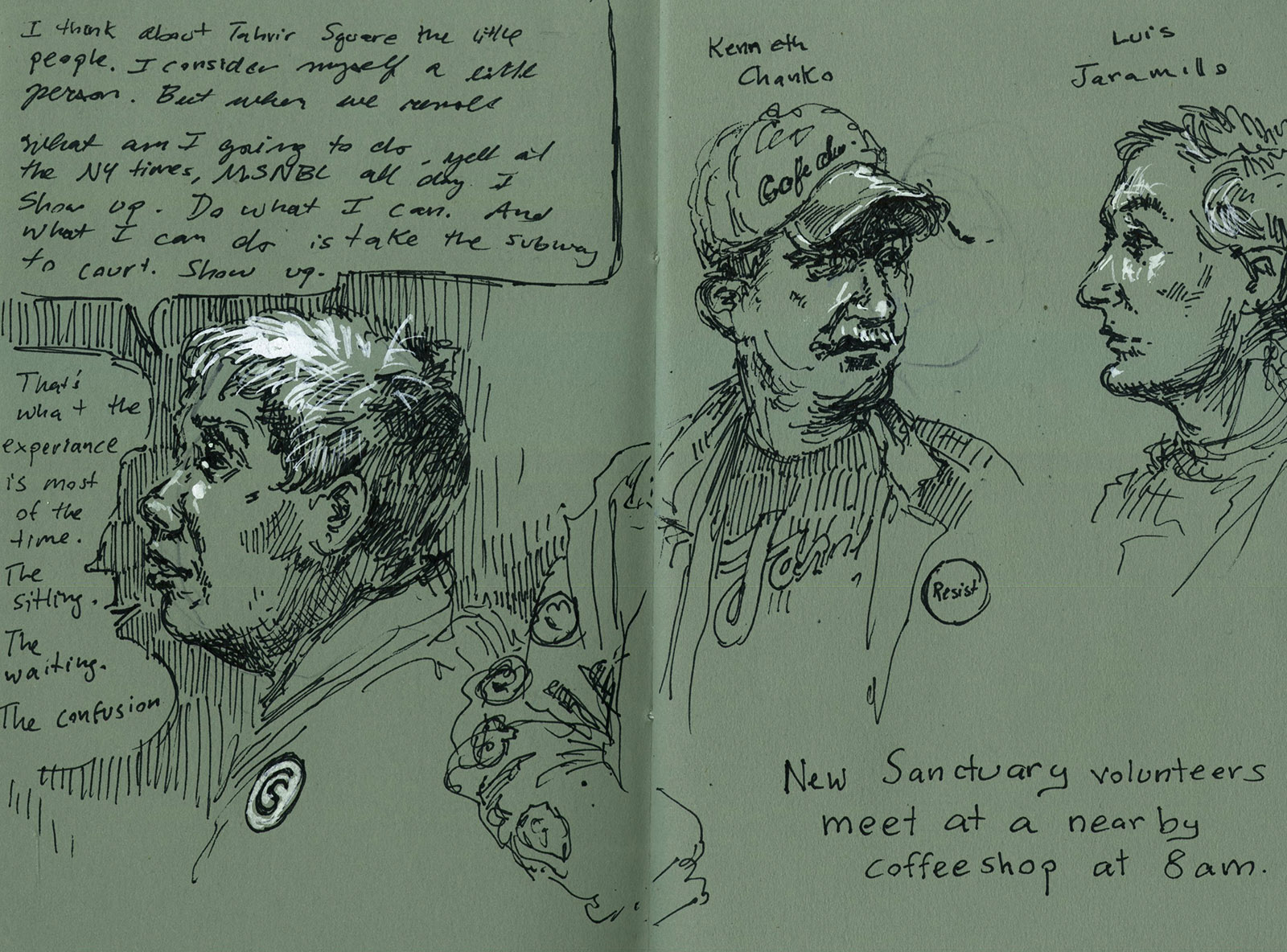 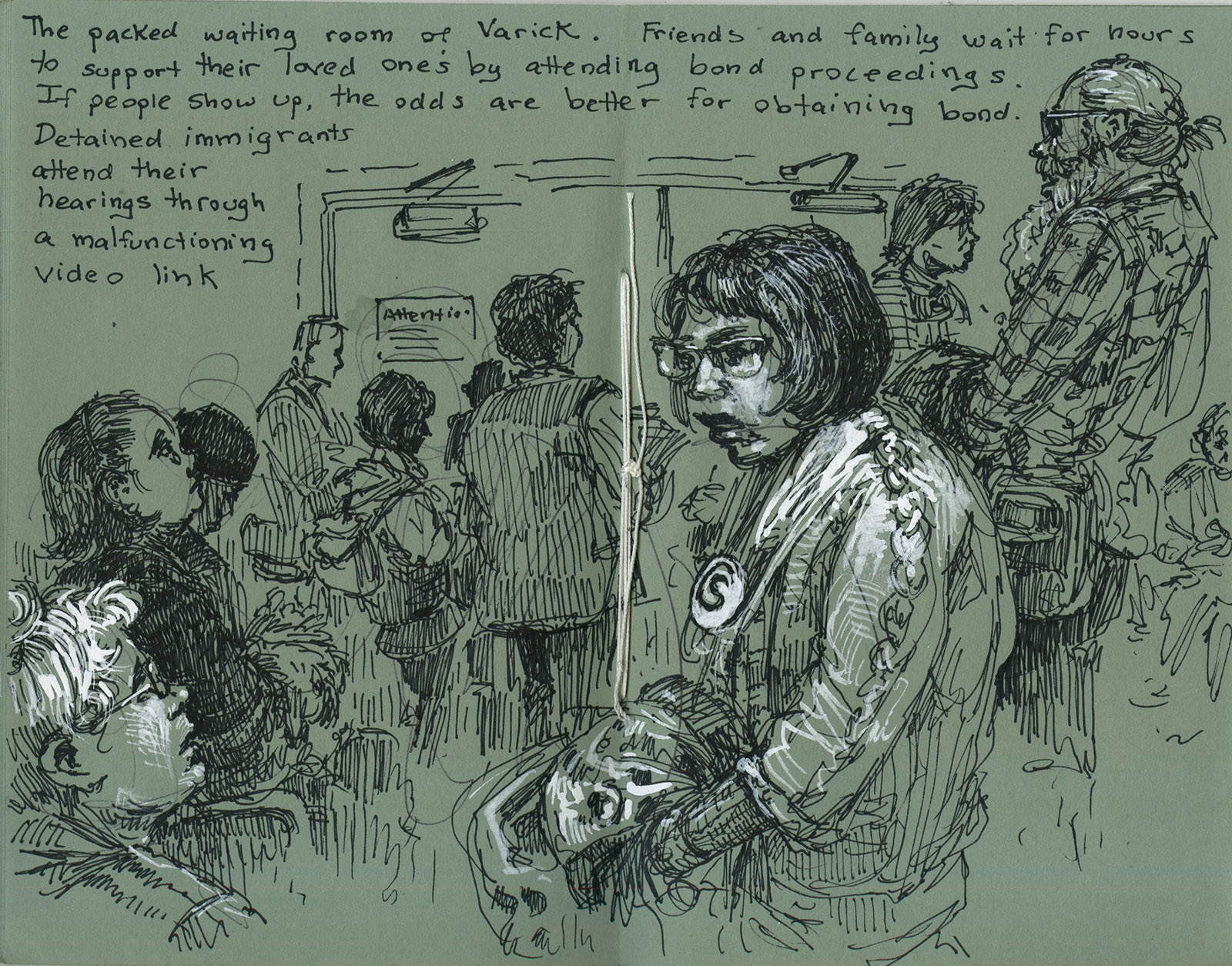 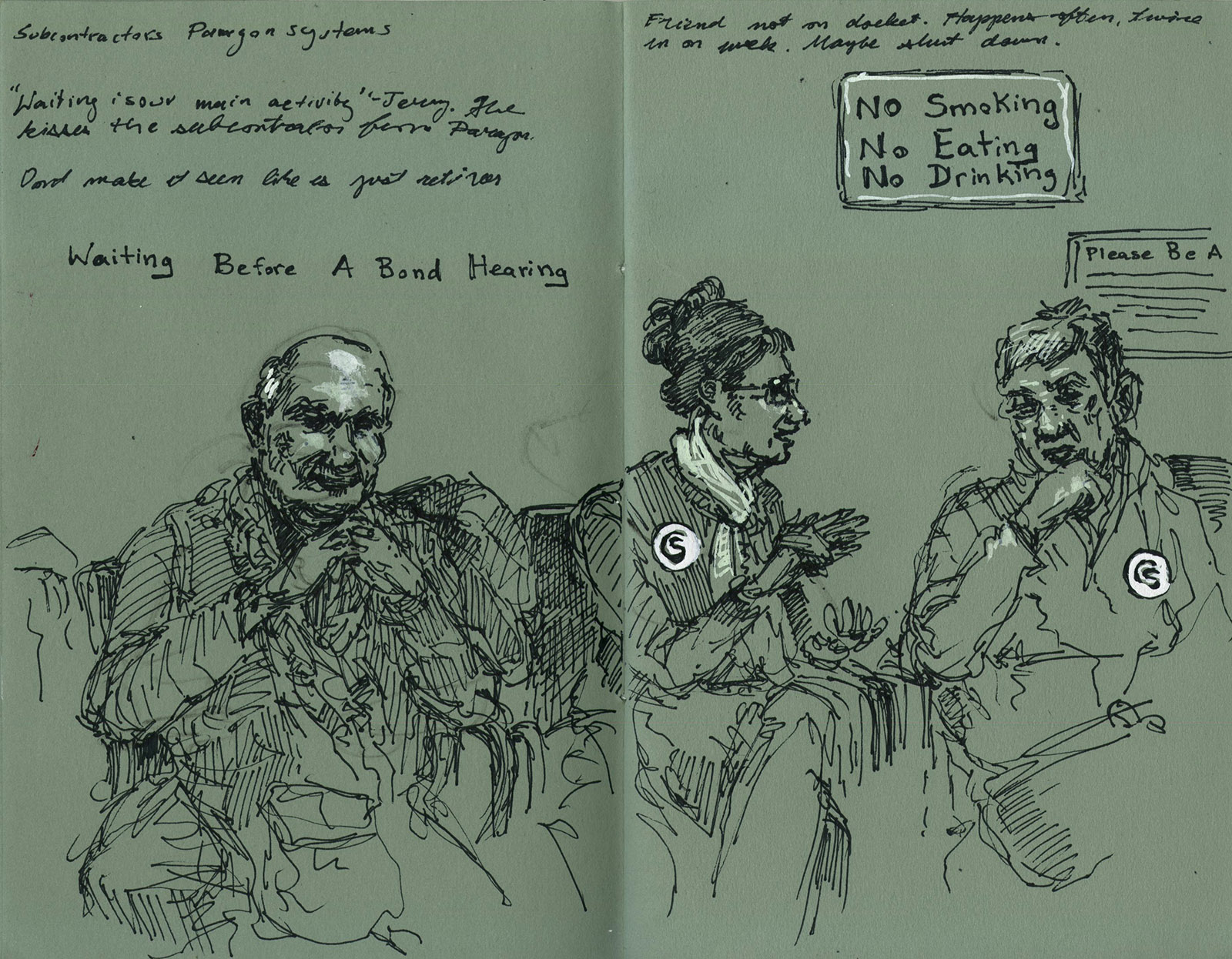 We had another friend on the docket for noon. When we returned, there was no room to sit. The entire waiting room was packed with the friends and family of detained immigrants: moms, cousins, little kids. More people at a hearing could mean lower bond because it showed proof of extensive ties of kinship and community and could make a friend less likely to be judged a flight risk, but how many days would all these people have to take off from work to be supportive? ICE’s bureaucratic reach spread over the community, impoverishing not just the lives of the detained immigrants but those of all who loved them.

I spoke to the boss of one of the detained immigrants. His employee had been picked up outside a courthouse while trying to pay a ticket for a misdemeanor. According to the Immigrant Defense Project, between 2016 and 2017, ICE arrests at NYC courthouses have increased 1,200 percent, and have even targeted alleged human-trafficking victims. After three months inside a detention center waiting for a bond hearing, his employee began coughing blood.

We waited another hour.

Finally, it was time for the hearing of the immigrant whom New Sanctuary was there to support. Along with family members, the volunteers filed into the tiny court. The friend showed up on the screen, a tired man in an orange prison jumpsuit, barely able to hear the translator over the audio link’s echo. His attorney asked for bond. The prosecutor haggled to keep him in detention. The judge agreed to a bond that was several thousand dollars higher than his attorney requested. The family rejoiced anyway. He would be out by that evening, to wait, at least, in his own home. Once there, he may try to file for asylum, or he may be caught in the loop of endless check-ins, his future uncertain. But for as long as he wants, as long as this purgatory lasts, New Sanctuary will wait with him.

“Most of these people are seeking asylum, fleeing terrible circumstances,” another New Sanctuary volunteer told me, while we waited. “I’m against the way our country is going right now. You feel so helpless. So if there’s even a small thing I can do, I do it. I lived through the Sixties. I thought we’d made all this progress. Now, I just feel like we are losing it all.”

Molly Crabapple is the author of Drawing Blood and, with Marwan Hisham, of Brothers of the Gun. Her artwork is in the permanent collection of the Museum of Modern Art. (May 2019)

India’s Farmers on the March

Agriculture in India relies heavily on rain and temperature in the growing season; farmers here are highly sensitive to climate. They have already felt the beginning of the apocalypse in the form of dried-up wells, declining yields, and mass migrations of people.

Rome: Where Migrants Face Eviction as Fascists Find a Home

Across Italy, some 10,000 migrants and refugees are living in squats. The housing crisis is part of a deliberate strategy by the government to make Italy as inhospitable to migrants as possible.

Abolish ICE: Beyond a Slogan

The movement to abolish ICE has been dismissed as little more than the left’s “new rallying cry,” but there are existing and emerging models for what it looks like to chip away at ICE and put something else in its place: a community-based alternative to a violent immigration system.