Even the most exhausting and mundane rituals of New York City living have become gilded with nostalgia, now that dailiness itself has been so utterly flattened by the pandemic. Public transit, for instance, and its chance encounters suddenly seem a vital element of the everyday, an experience millions of people are now without. The bus or subway commute, easily taken for granted as a tiresome workday bookend, is revealed by its absence to have offered much more: a performance, a respite, a dwell time for straying thoughts and imagining the lives of strangers.

Farah Al Qasimi’s Public Art Fund commission “Back and Forth Disco”—which opened in January and places seventeen photographs across one hundred New York bus shelter light boxes—has acquired an unforeseen resonance, restoring serendipity to a metropolis under lockdown. Many of these images, most flash-lit and tartly hued, concern the city’s commerce, especially the commerce that occurs among immigrants. A pearlescent chandelier in a Yemeni-owned bodega; an Indian wedding garland of faux flowers, tied around a parked car’s rearview mirror; a white cockatoo, backdropped by a Ridgewood draper’s pastel curtains: Al Qasimi’s eye locates and enlarges the oblique, beguiling minutiae of ordinary life.

Take, for instance, Mannequins, found at a bus shelter near an overpass on 21st Street in Queens. We see a pair of white plastic heads, one wearing a blue hijab, the other a red one: an homage, maybe, to Eugène Atget and Berenice Abbott’s storefront photography from early-twentieth-century Paris, but perhaps also a pun on the French tricolor and the country’s secularist bias against women’s Islamic head-covering. In Al Qasimi’s composition, one head leans toward the other, as if to whisper. The artist sited many of these displays near the interiors they portray, as in 5 Star Barber Shop—installed at Bay Ridge near a Palestinian-owned salon—which documents a moment of commonplace labor made strange by a corridor of infinity mirrors.

The proximity of those two images, like many in “Back and Forth Disco,” have taken on fresh and rueful meaning from our current embargo on closeness. Most of the businesses represented in the exhibition—barbershops, bodegas, malls—have now shuttered, their owners facing uncertainty. And while Al Qasimi’s project consists of images for people to view while traveling from A to B, it may now command more views at home, where the pleasures of site-specificity are exchanged with those of online promotional shots, taken by James Ewing, that show pedestrians and places interacting with the art in situ. I’ve stumbled upon works from this exhibition during ambles in Queens, and each time I paused to look at one of the light boxes, every bus that passed was empty.

In Woman in Leopard Print, installed at 21st Street between 27th Road and 28th Avenue, a hijab-clad woman faces away from the lens, whose gaze she meets in the compact she holds like a lover’s eye in a Georgian miniature—or is it her own gaze she’s meeting? Al Qasimi, who grew up in Abu Dhabi and now divides her time between Dubai and New York, repeatedly broaches such questions of seeing, often through mirrors and portraits-within-portraits, and through arch subversions of photographic representation and marketing. 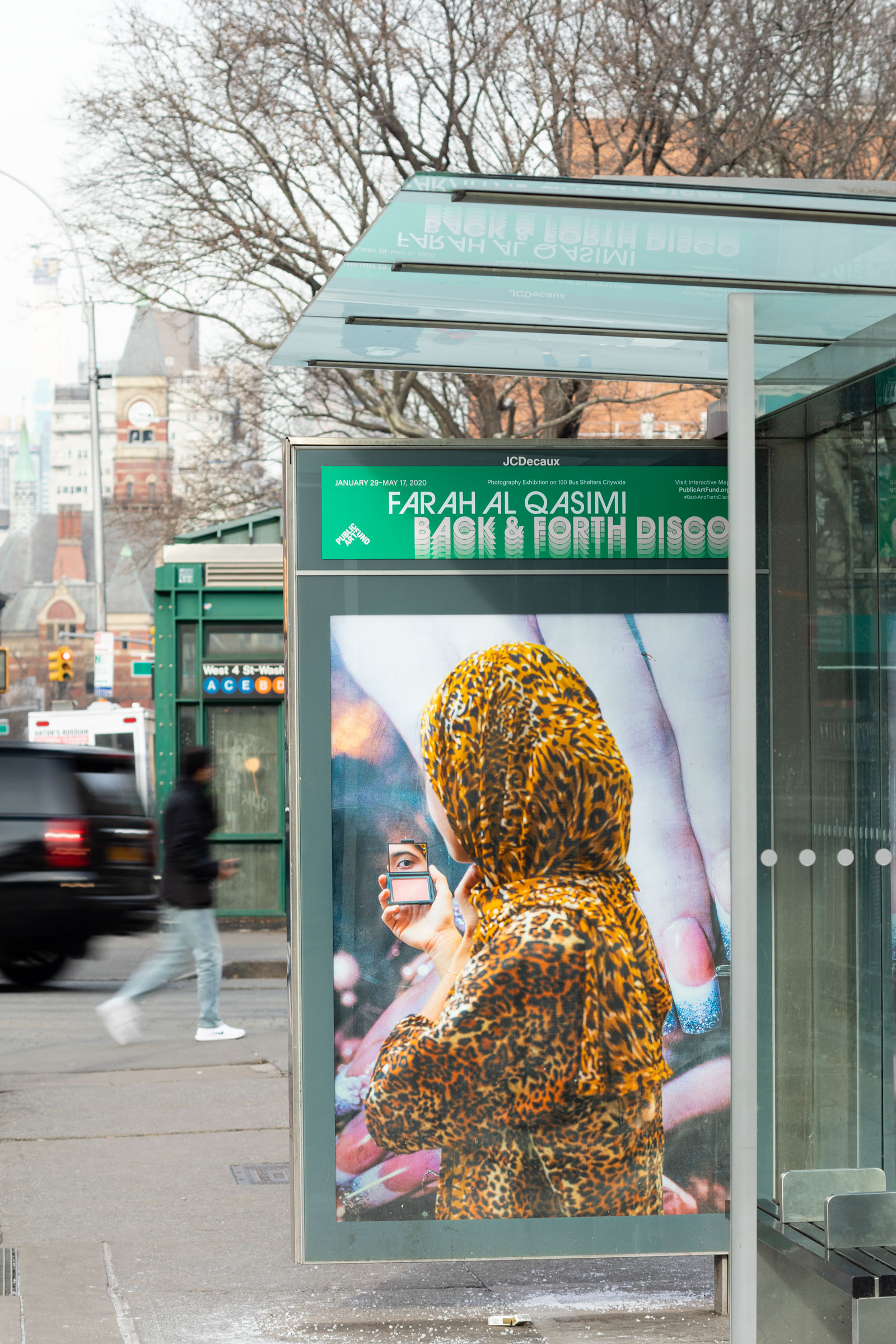 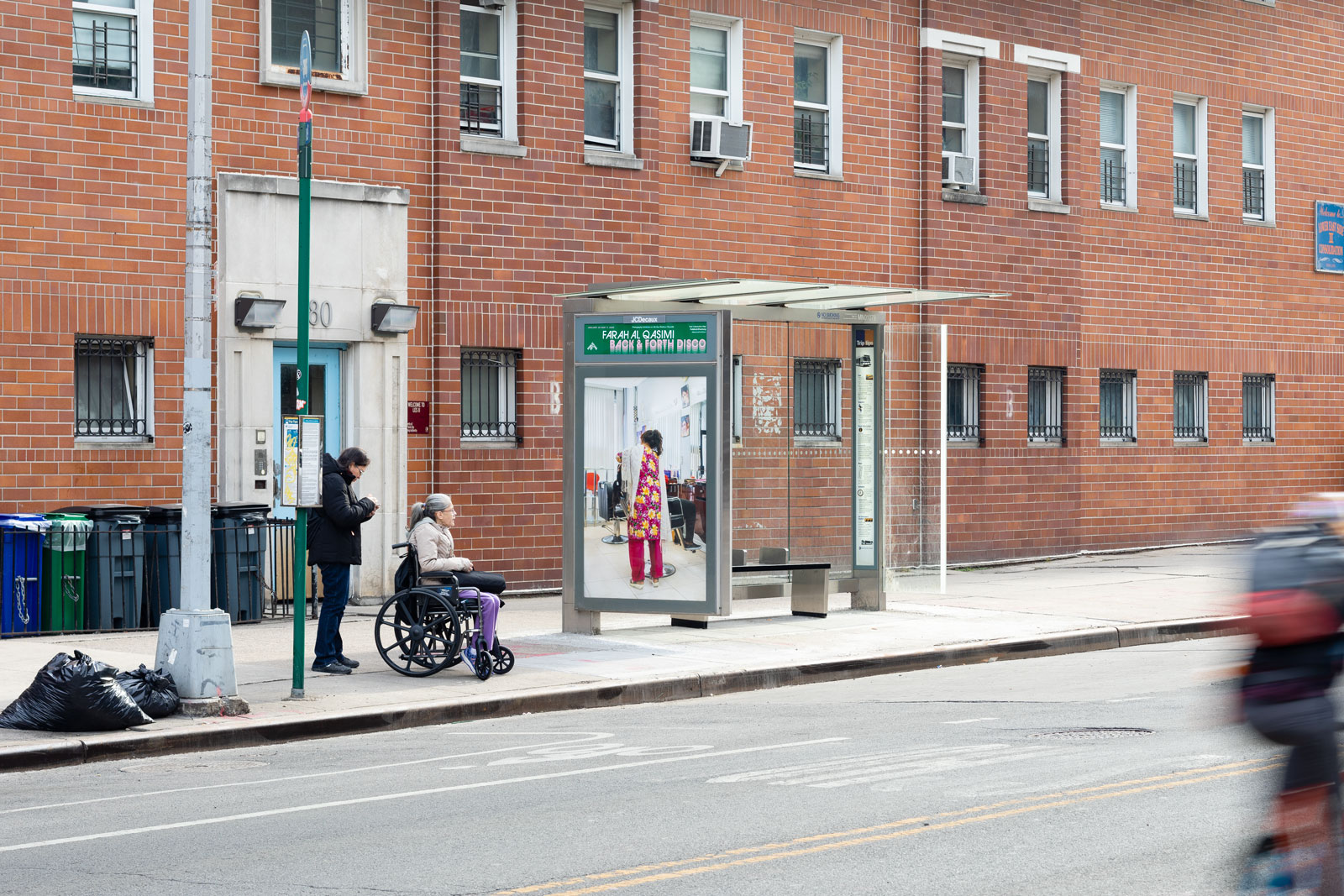 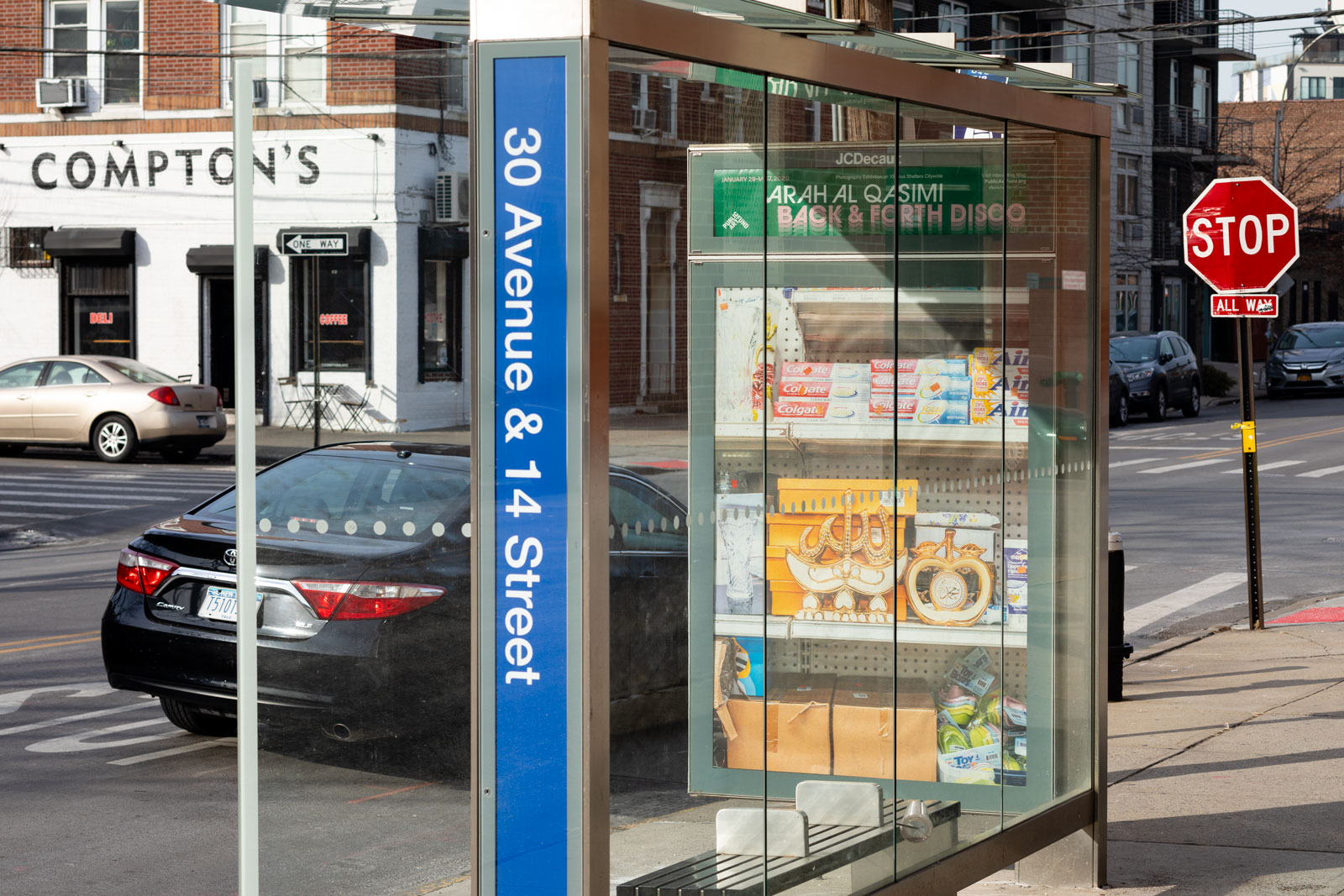 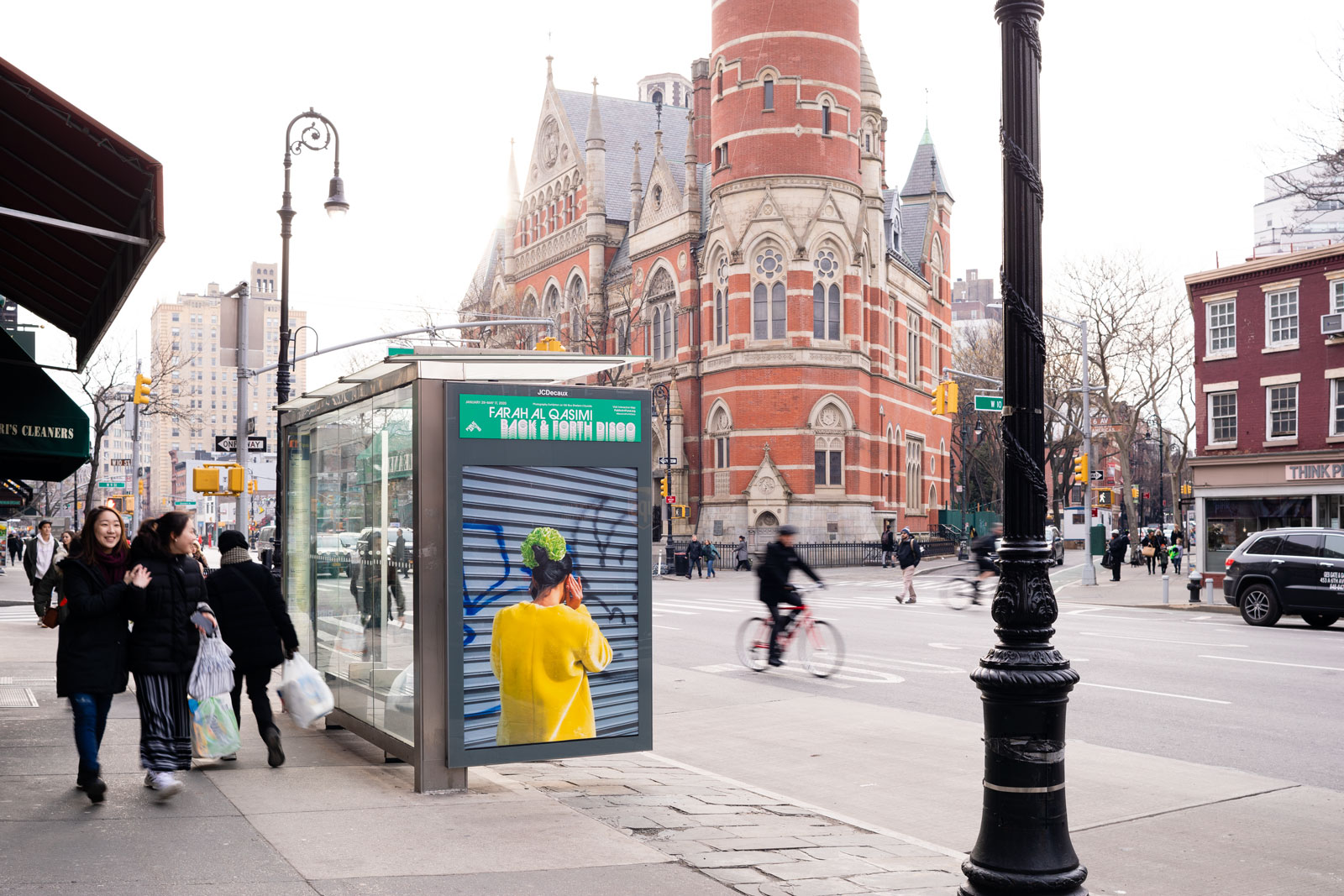 At first glance, I read Woman in Leopard Print as an advertisement, which is only half-true (the chic subject stands before what appears to be an ad for glittery artificial nails). What draws me in is her turning-away—a recurrent pose in “Back and Forth Disco”—and how such a stance in portraiture might slowly steer our attention to details otherwise overlooked, emphasize the photographer’s voyeurism, or decouple anonymity from invisibility. Like many young Gulf-born artists, Al Qasimi is sensitive to the harms of mass surveillance, and throughout this exhibition, she renders identity mainly through ornament, keeping subjects’ faces outside the frame. How crucial then that these pictures command public space, areas where most image-taking is intrusive and not consented to, and where most visuals are designed to make you spend money.

And yet, Al Qasimi’s series is primarily about shopping: the randomized allure of browsing local inventory, the troubling thrill of apprehending an image. A work like Dollar Store—which shows a bright shelf of gold tchotchkes, toy boats, diaper rash paste, and Colgate—becomes a shrine to the happened-upon. Bodega Chandelier’s gaudy light fixture dangles from a blue-sky-painted ceiling, above a fortress of Cheese Nips, Pringles, and Chips Ahoy!, while a dome security camera stares through the picture plane. East Broadway Mall affords a heightened vantage onto a Chinatown emporium full of colorful, blurred blooms.

Like American conceptualist Dennis Adams’s bus shelter sculptures and photo-texts from the 1980s and 1990s, “Back and Forth Disco” unfolds with an unlikely alloy of ambiguity and persuasiveness, appropriating the language and architecture of advertising to, in his words, “delay and reroute those conventions and open up the idea of ‘transit’ to its purest connotation as a line of escape.” Al Qasimi herself has pointed to the influence on her work of Emirati mall culture, a fusion of endless capitalist excess and air-conditioned dérive, Guy Debord’s term for an unplanned urban journey.

“You can go to a mall and not spend money. You can just be there and loiter,” the artist told Document Journal last year. “When I’m home, a lot of the work is just being outside and paying attention, and also allowing myself to have that same moment of seduction or desire that a shopper might have, but with watching people and enjoying space.”

During our indefinite time of distancing and shrunken radii, these photographs occasion a communion and commute that is both public and private. Where they take you is up to you.

“Farah Al Qasimi: Back and Forth Disco” is on view throughout New York City through June 14. This interactive map shows all locations of photographs, and additionally viewers can visit a virtual exhibition.

In Our Voices, Our Streets: American Protests 2001–2011, Kevin Bubriski documents the first decade of the new millennium with portraits of dissent.