In sixteenth-century Florence, as republican government yielded to rule by the once-exiled Medici clan, a verse of Virgil’s Aeneid began to attain new relevance. In Book Six of that poem, Aeneas is instructed to pluck a golden bough to serve as his passport to the underworld; his guide assures him that “after the first [branch] is torn away, there’ll be no lack of a second.” To Renaissance Florentines, with their highly developed sense of allegory, the partial hexameter line carried political meaning. The “branch” of the Medici line that had ruled in the previous century, that of Lorenzo il Magnifico, had come to a disastrous end; after its exile and forceful return to power in 1530, its last male heir, the debauched Alessandro, had been assassinated by another Medici who thought him a tyrant. But a “second” branch, descended from Lorenzo’s great-uncle, was waiting in the wings.

The Virgilian quote, in slightly altered form, appears on a canvas of the portraitist Jacopo Pontormo depicting Lorenzo’s grandfather, Cosimo il Vecchio, the patriarch of the original Medici dynasty. The date of that painting is disputed, but it may coincide with the accession of a second Cosimo, the seventeen-year-old scion of the collateral line (though also connected to the line of Lorenzo through his mother). This teenager, known to history as Cosimo I, assumed the rule of Florence in 1537, shortly after the murder of Alessandro. With this new leader from the family’s second branch, Pontormo seems to suggest, the Medicis had a chance to start over, erase the ill repute they had gained from their forceful return to power the previous decade, and reclaim the bygone glory of the previous century, when Lorenzo il Magnifico had helped make the city the artistic capital of Europe. Such is the backdrop to the Metropolitan Museum of Art’s important new exhibition “The Medici: Power & Politics, 1512–1570.”

Perhaps it was the young Cosimo himself who suggested the Aeneid quote to Pontormo, for he was soon using it as part of his impresa, the emblem engraved on his medallions. If so, this was the beginning of Cosimo’s remarkably effective control of the making of Florentine art—in particular, portrait painting—to bolster his power, burnish his image, and promote himself as the head of state he did indeed later become. During his thirty-seven-year reign, Cosimo deftly co-opted the great artists of his day, along with writers and intellectuals, and augmented his city’s stature as Europe’s cultural center. In doing so, he greatly extended the principle under which Il Magnifico had governed: proud republican Florentines might accept curtailed freedom, even virtual autocracy, so long as the arts and letters continued to flourish.

Pontormo’s student Agnolo Bronzino was central to this strategy. Cosimo recruited him two years into his reign, when he married Eleanor of Toledo, a distant relation of the Medici’s chief foreign ally, the Habsburg emperor Charles V. Bronzino created banners and decorations to herald the wedding, which, though no longer extant, were apparently much to the young duke’s taste. Thereafter, Bronzino became the leading court artist and official family portraitist. His solemn, regal portrayals of Cosimo, Eleanor, and their children functioned as the regime’s primary means of self-advertisement; his canvasses were reproduced by the dozen and sent, as gifts and guarantors of status, to the crowned heads of Europe. For this reason, one such image seen here—an arresting painting of Cosimo in his thirties bedecked in impressive black armor—is known today in nearly thirty versions. A severed tree stump in the foreground, with a new laurel shoot sprouting from it, serves to remind the viewer of the vigor of the second Medici branch (the laurel being a well-known family emblem).

Although the exhibition tips its hat to the other Medicis who preceded and followed Cosimo, it is he who dominates the show, just as he dominated sixteenth-century Florence. The viewer meets him here at every stage of adult life: from vigorous adolescent just growing his first beard, in a portrait bust by Baccio Bandinelli, to the scowling potentate sculpted by Bandinelli’s student, Giovanni dell’Opera, nearly four decades later. Cosimo takes on many guises, appearing as a Roman emperor in full Caesarean splendor, as an armor-clad condottiere, and, in a stirring marble relief by Perino da Vinci (a nephew of Leonardo’s who died tragically young), as the heroic benefactor of Pisa, bringing new water supplies to the city from a personified River Arno. Less conventionally, in the late 1530s Bronzino also depicted Cosimo, nude, as Orpheus, soothing the savage Cerberus with the music of a bowed lyre. Perhaps to compensate for its pacific theme, the portrait also hints at its subject’s virility in the position of the bow Cosimo holds, which X-ray studies have revealed the artist altered to emphasize its phallic attitude.

Other members of Cosimo’s clan also in the Met exhibit appear in Bronzino’s highly constructed, heraldic portraits. Cosimo’s eldest son, Francesco, is shown as a grave ten-year-old, with deadpan expression and in funereal clothing; the point was to show the world that Florence could expect a serious-minded heir. (In fact, Francesco turned out a cad, abandoning his wife to take up with a married Venetian woman, and, quite possibly, having her husband killed.) Eleanor, Cosimo’s famously devoted spouse, is shown in magnificent poise on three Bronzino canvasses, all clearly conveying the requisite female virtues of loyalty, maternity, and fertility. But Bronzino was no mere propagandist. In a chalk sketch, casually done on a piece of scrap paper, he made a startlingly vibrant portrait of Cosimo’s mother, Maria Salviati, that conveys his deep human sympathy with his patrons. (After Maria’s death in 1543, the sketch was used by Pontormo as the basis of a much cooler, nearly hagiographic portrait, not on display in the Met exhibition.)

The show’s ambit extends far beyond the Medici family. Depictions of other subjects, by Bronzino and his younger contemporaries Francesco Salviati and Giorgio Vasari, convey the cultural life of sixteenth-century Florence, a city that looked to the past for literary inspiration even as Cosimo sought to sponsor a new golden age of its art. Books appear in a number of these paintings as far more than props. Dante and Petrarch haunt the painters’ imaginations, resurrected in physical form or represented by volumes of verse that many portrait-sitters hold in one hand, a page marked by an inserted index finger. In a few instances, these books are shown open, displaying a passage of significance from the Divina Commedia or Canzoniere. Such is the case in Bronzino’s marmoreal portrait of Laura Battiferri (circa 1560), a Florentine poet with whom the painter exchanged impassioned sonnets in the Petrarchan manner (as seen in two gracefully lettered manuscripts lent to the Met by Florence’s Biblioteca Nazionale). In another Bronzino canvas from the late 1520s, an intense adolescent named Lorenzo Lenzi holds open a book to show two sonnets on facing pages, one by Petrarch and the other by Lenzi’s older contemporary, the humanist Benedetto Varchi. The play between the two poems, together with the placement of Lenzi’s thumb on the Petrarch page, seem to contain a coded allusion to Varchi’s passion for the young man (as expressed in his surviving letters). 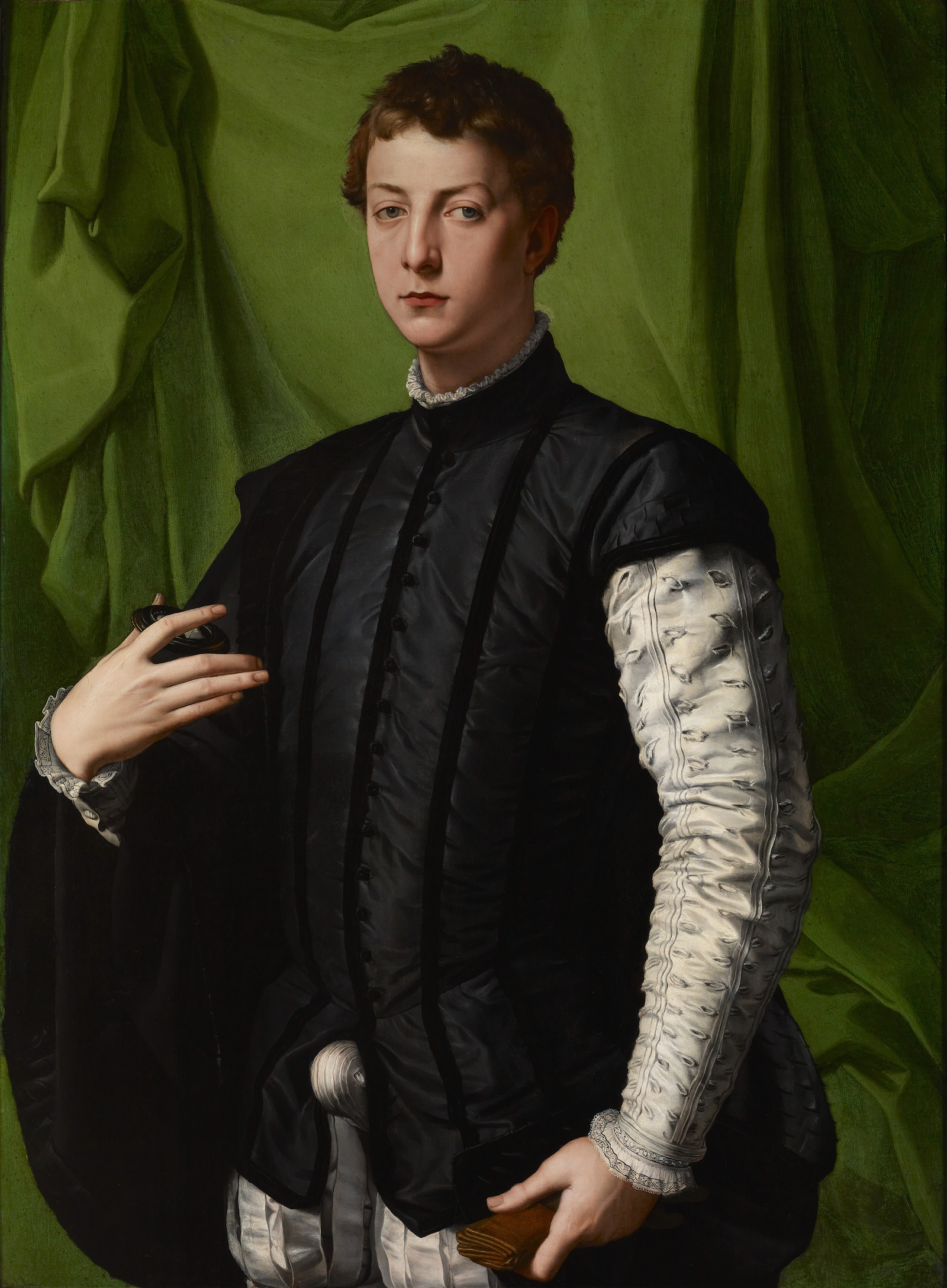 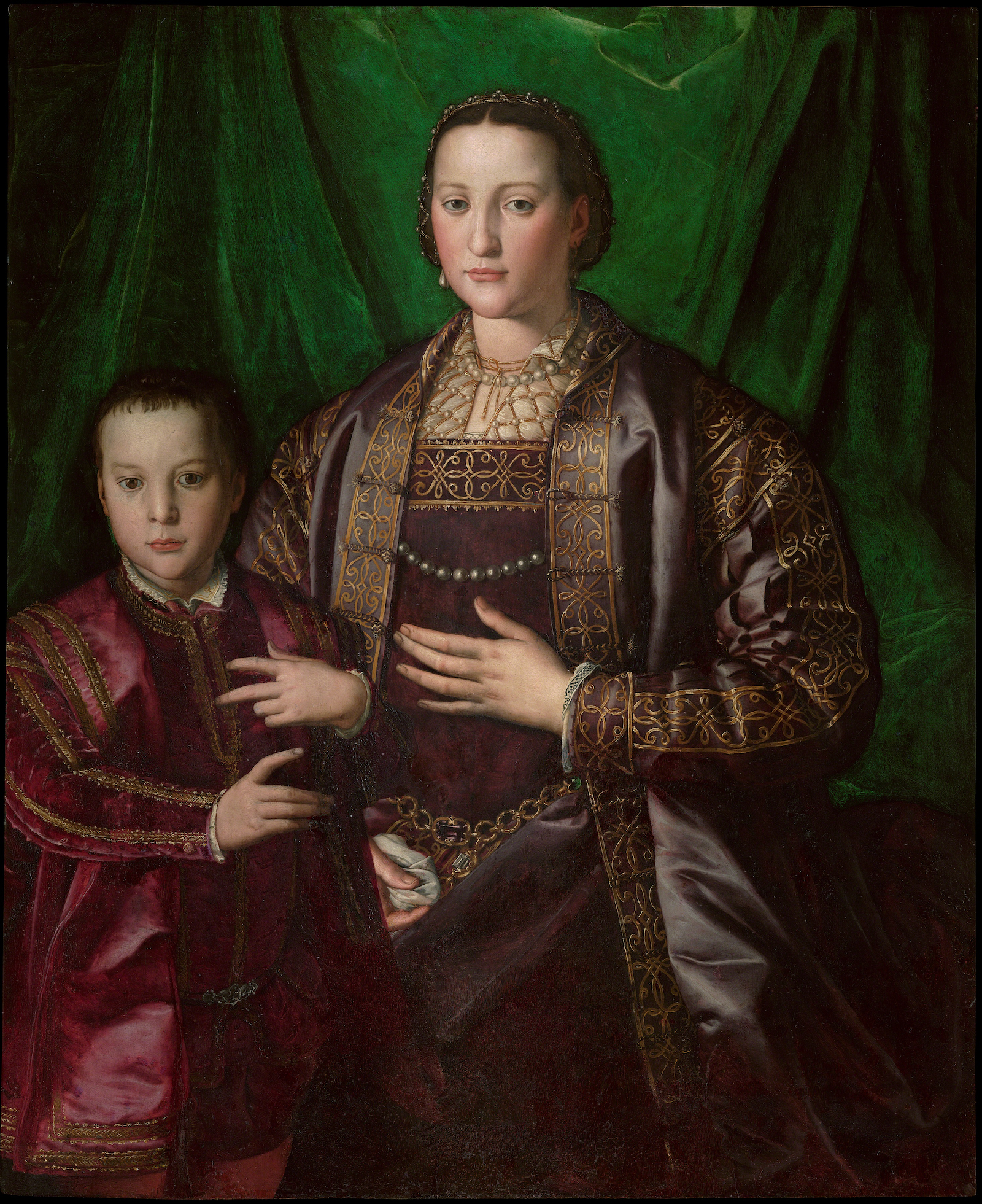 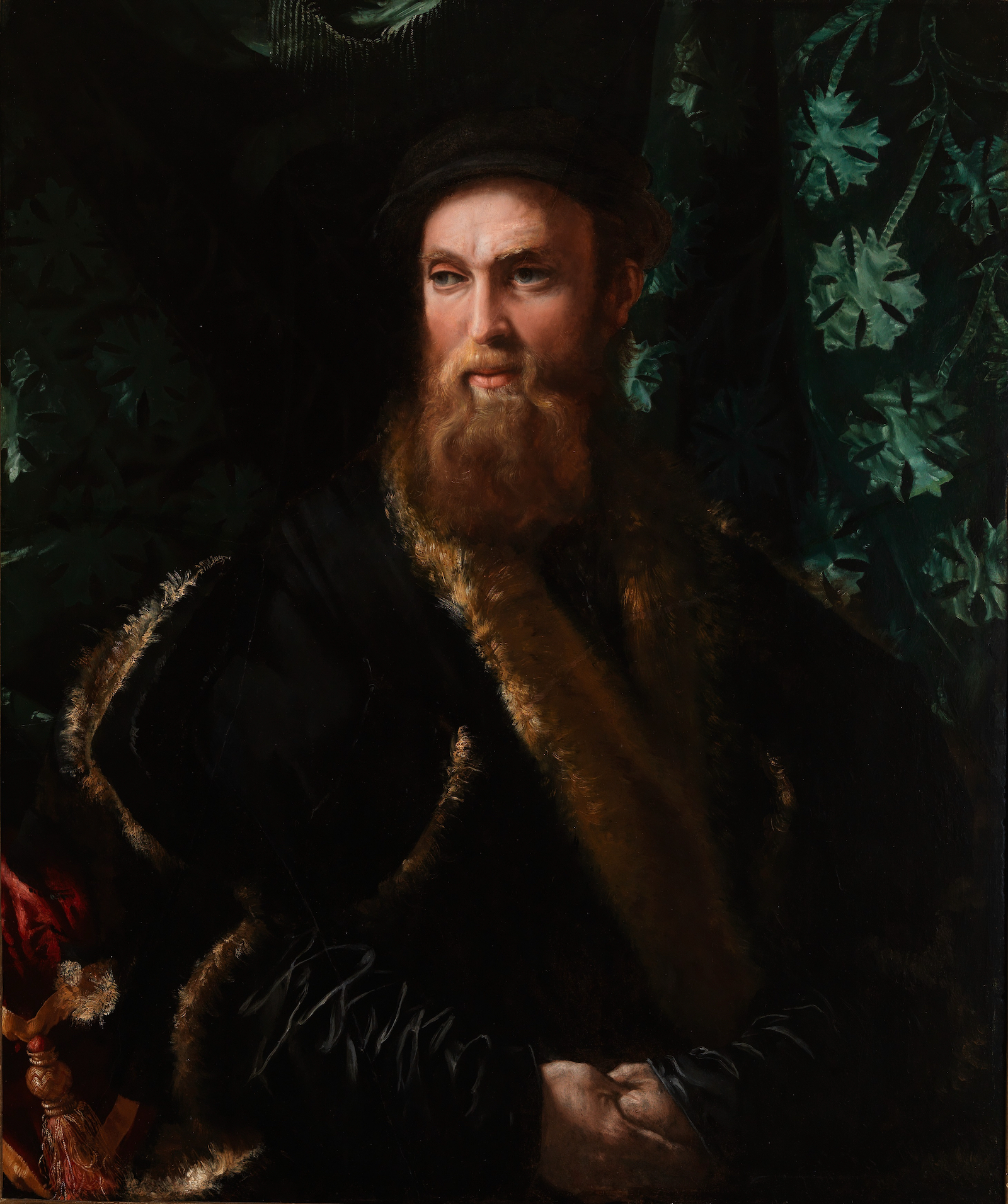 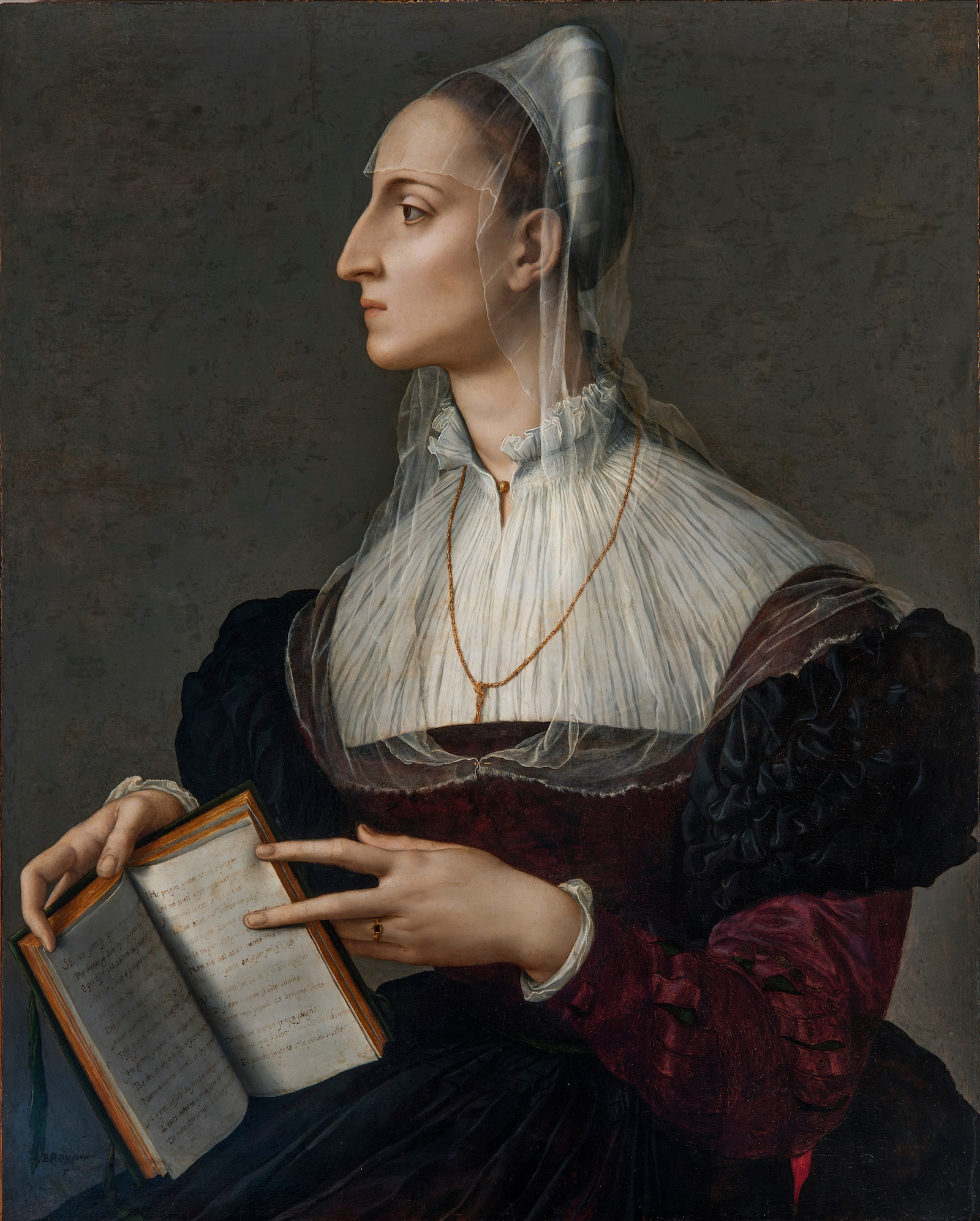 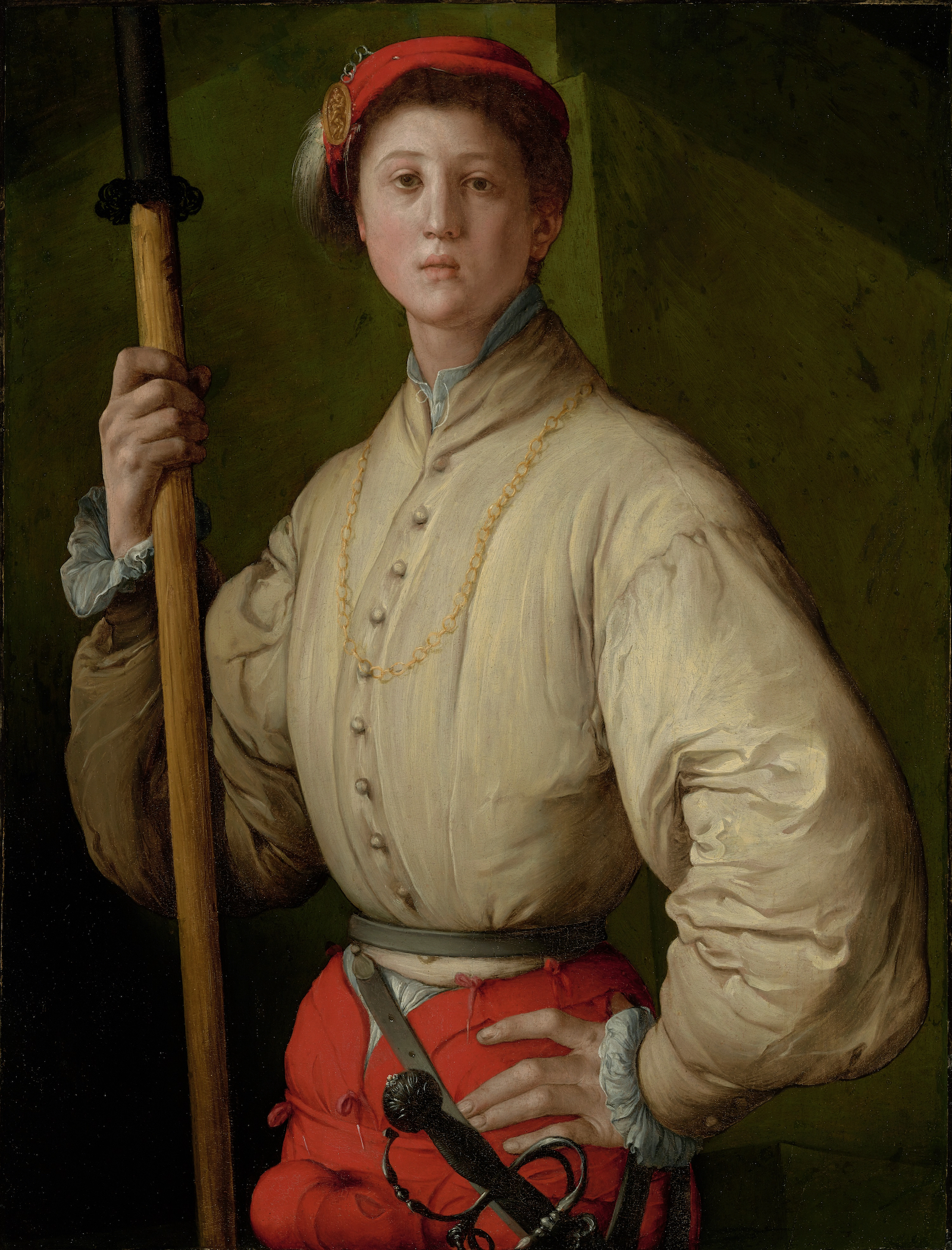 The final room of the exhibition compares the techniques of Bronzino and Salviati, their canvases hung on facing walls. Both men were employed by Cosimo in the 1540s to decorate the Palazzo Vecchio, formerly the seat of Florence’s republican government but now converted, pointedly, into the principal Medici residence. Salviati, who traveled widely and studied with Roman, Bolognese, and Venetian masters, developed an intimate and expressive pictorial style that may hold greater appeal for modern viewers than what the Met’s curators call Bronzino’s “cold aloofness.” But Cosimo preferred Bronzino’s characteristically Florentine visual language and lapidary surfaces, free of both Venetian naturalism and the Raphaelesque use of ornament then prevailing at Rome. In 1548, it was to Bronzino that Cosimo awarded an important tapestry commission, over both Salviati and Pontormo; Salviati decamped to Rome, where he died in 1563.

Around the time of Salviati’s departure, Bronzino was  joined at Cosimo’s court by another painter and writer, Giorgio Vasari. Vasari’s influential Lives of the Artists (1550) canonized the artistic choices of this second Medici branch and extolled Cosimo, its dedicatee, as a glorious patron. In the 1560s, Vasari painted a memorable image of Cosimo’s apotheosis on one of the ceiling panels of the Palazzo Vecchio, at that time the Medici residence. It shows a personified Florence crowning the duke with an oak wreath, the adornment often worn by Emperor Augustus on Roman coins and busts. The tribute proved apt indeed: in 1569, having renewed and reshaped Florentine art with Augustan vigor, Cosimo was anointed Grand Duke of Tuscany by the pope, putting a seal on the restoration of Medici power.