In reporting on the two million people who have fled Iraq since 2003, Alisa Roth and I have been struck by the extent to which their experiences have eluded visualization. Unlike during other refugee crises, we have seen no columns of people on foot pushing their belongings in carts and wheelbarrows; no large camps with blue UN tents; no legions of starving, half-naked children gathered in dusty rural terrain. Instead, hundreds of thousands of ordinary, middle-class men and women—educated city-dwellers like ourselves—have fled from Baghdad and other Iraqi cities to similarly anonymous urban areas outside the country.

Perhaps because of this disconcerting ordinariness, the plight of Iraqi refugees has been a seemingly intractable subject for photojournalists; and the crisis has been all too easily overlooked by the press—despite the fact that the departure of Iraq’s secular urban elite may be one of the most devastating and lasting consequences of the war. Yet a few, including the Czech-American photographer Gabriela Bulisova and the Swiss-based Afghan photographer Zalmaï, both of whose images appear in our Review article, have been able to overcome this challenge. Some of Bulisova’s imaginative photo documentations of Iraqis who have been resettled in the United States—many of them struggling to get by—are now on view at the Delaware Center for the Contemporary Arts.

Zalmaï, whose recent, aptly titled collection, Silent Exodus, depicts Iraqi exiles who are stuck in the Middle East, offers powerful insight into these people’s uprooted lives—and their often remarkable efforts to cope with a situation that has no obvious end. The photographs in Silent Exodus were taken in 2007, during a series of trips Zalmaï made to Syria, Jordan, and Lebanon, the three leading destinations for fleeing Iraqis. Pairing a series of portraits of families and individuals with brief first-person accounts of the events that caused each to leave, Zalmaï’s book, though slender, gets close to a number of the social and psychological effects of exile and the traumas that lead to it. “The basis of society in Iraq has been destroyed: there are no more teachers and judges,” a former schoolteacher tells Zalmaï. Taking the picture from above, Zalmaï shows the man’s reduced existence: he is sitting in a small, barren room in Damascus, his well-tailored shirt—a habit of an earlier life—clashing with the ratty towel behind him apparently standing in for a curtain and his head-in-hands despair. 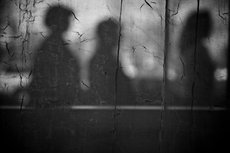 Three generations of Iraqi women now living in the United States; photograph by Gabriela Bulisova from the exhibition The Option of Last Resort

In one image, a woman, evidently engrossed in the experiences she is relating, stares large-eyed at the wall—seeming to relive her shock—as she recalls the violence that forced her to abandon her country. Another portrait, among the most horrific in the series, shows a small, unclothed boy lacerated with burns suffered when his house was bombed; his father, who is holding him, has taken him to Amman in hopes of getting him medical treatment. But as with many of the Iraqis we met who survive in Jordan’s underground economy, they are afraid they will be sent back to Iraq. “I don’t dare go outside for fear of deportation,” the father says.

Yet the cumulative tragedy of these portraits is balanced by an equally forceful current of resilience that runs through many of them. An Iraqi woman, hanging laundry in a dingy airshaft in Syria, looks up almost joyfully at the shafts of light that have managed to penetrate this dark corner; a young boy watches with rapt fascination as a man works with a hammer and water sprayer—industriousness somehow persevering despite unemployment and (as we often found among the Iraqis we met in Jordan) lack of access to school; a girl in a dark Damascus apartment leaps into the air with such glowing force that the somber Iraqis watching her and the peeling room they are in seem almost to dissolve around her.

Indeed, we encountered numerous Iraqis in Jordan and elsewhere who had, notwithstanding the squalor of their surroundings, kept their clothes perfectly pressed and retained small things—a bouquet of plastic flowers, a cracked mirror, a framed photograph—as a way of holding on to some semblance of the life they had known. Conveying this with particular poignance, perhaps, is Zalmaï’s arresting portrait of an elegant middle-aged couple, both winsome and finely groomed, sitting together on a small couch: a composition infused with dignity and careful decorum. Yet on closer inspection, the man is missing his right arm, and their anxious faces are filled with resignation to a life of uncertainty, completely cut off from the world they knew.

Zalmaï’s collection of photographs, Silent Exodus: Portraits of Iraqi Refugees in Exile, is published by Aperture, with an introduction by Khaled Hosseini. Gabriela Bulisova’s photographs can be seen in the exhibition The Option of Last Resort: Iraqi Refugees in the United States, at the Delaware Center for the Contemporary Arts through May 30, 2010.

They Fled from Our War