Martyrs, a new work by the American video artist Bill Viola, is difficult to take as seriously as it takes itself. It is being shown as a permanent exhibit in St. Paul’s Cathedral in London, just a few feet from the high altar, and is designed as a kind of altarpiece. Four plasma screens are arranged in a row on a sleek metal stand by the architect Norman Foster. Each screen shows a silent video, a little over seven minutes long, of a person undergoing a highly aestheticized ordeal involving, respectively, earth, air, fire, and water—all captured with sumptuous visual effects and all withstood in serene and saintly forbearance. They are intended to focus our attention, Viola says, on “our capacity to bear pain, hardship and even death in order to remain faithful to values, beliefs and principles.”

The videos play simultaneously and on a constant loop throughout the day, but are stopped during services in the cathedral. In one, a man curled on the floor with a rope around his ankles is gradually hauled upside down and showered in water. As he is soaked he draws his arms up so that he hangs by his feet in cruciform. Fire rains down on a man sitting in a chair that is slowly engulfed in flames. A woman in a pale dress, who is hanging by her wrists with her feet roped to the floor, is blown about by a strong wind. Lastly a man buried in a mound of dirt is uncovered as the dirt rises from him in a column, as though sucked by an ever-strengthening updraft. Eventually these forces are becalmed, and the four figures are bathed in beatific light. The man doused in water is slowly raised up into the light. The other three just raise their eyes with restful looks on their faces. The woman in the pale dress gently slips her wrists from their bonds. 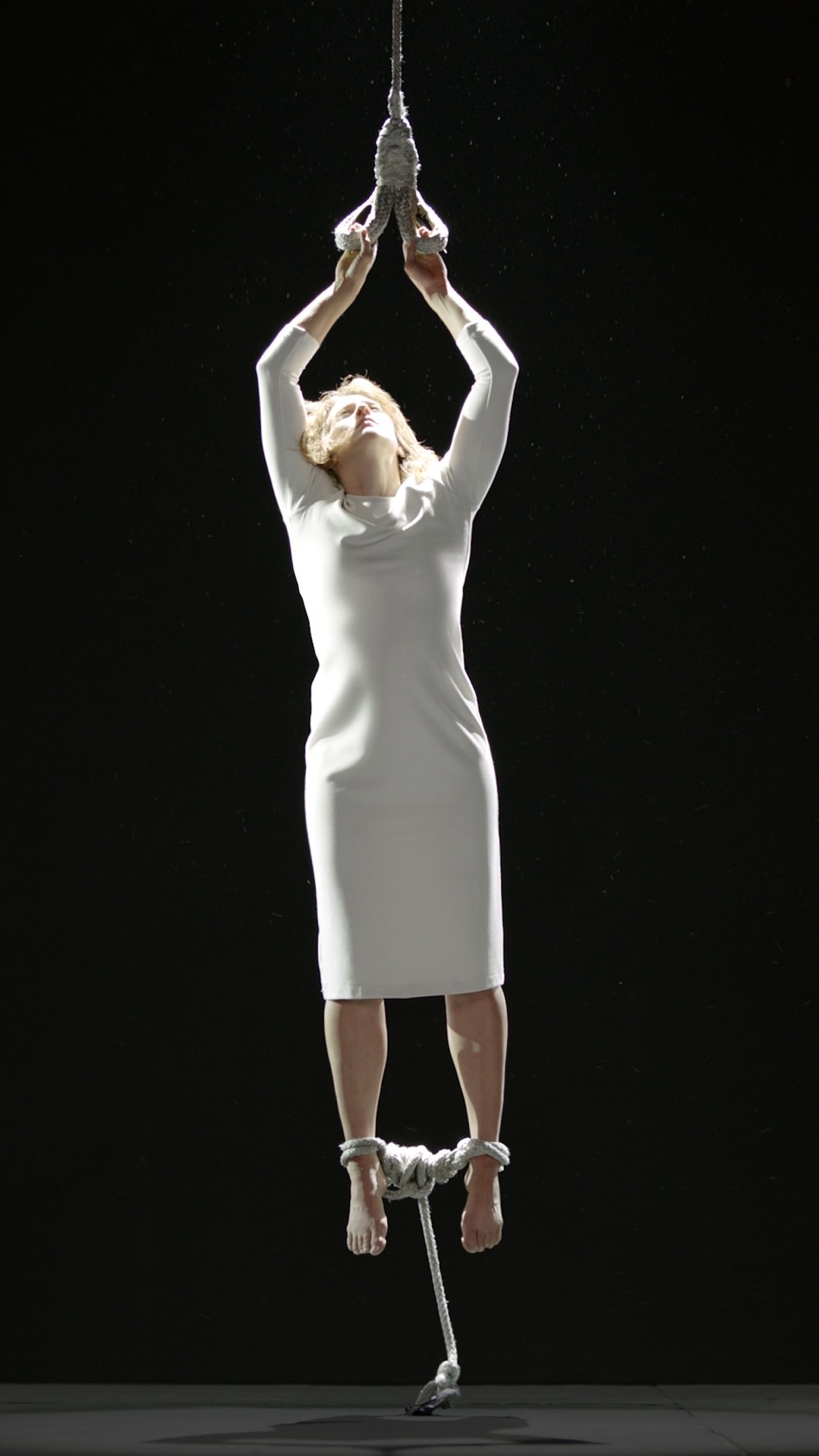 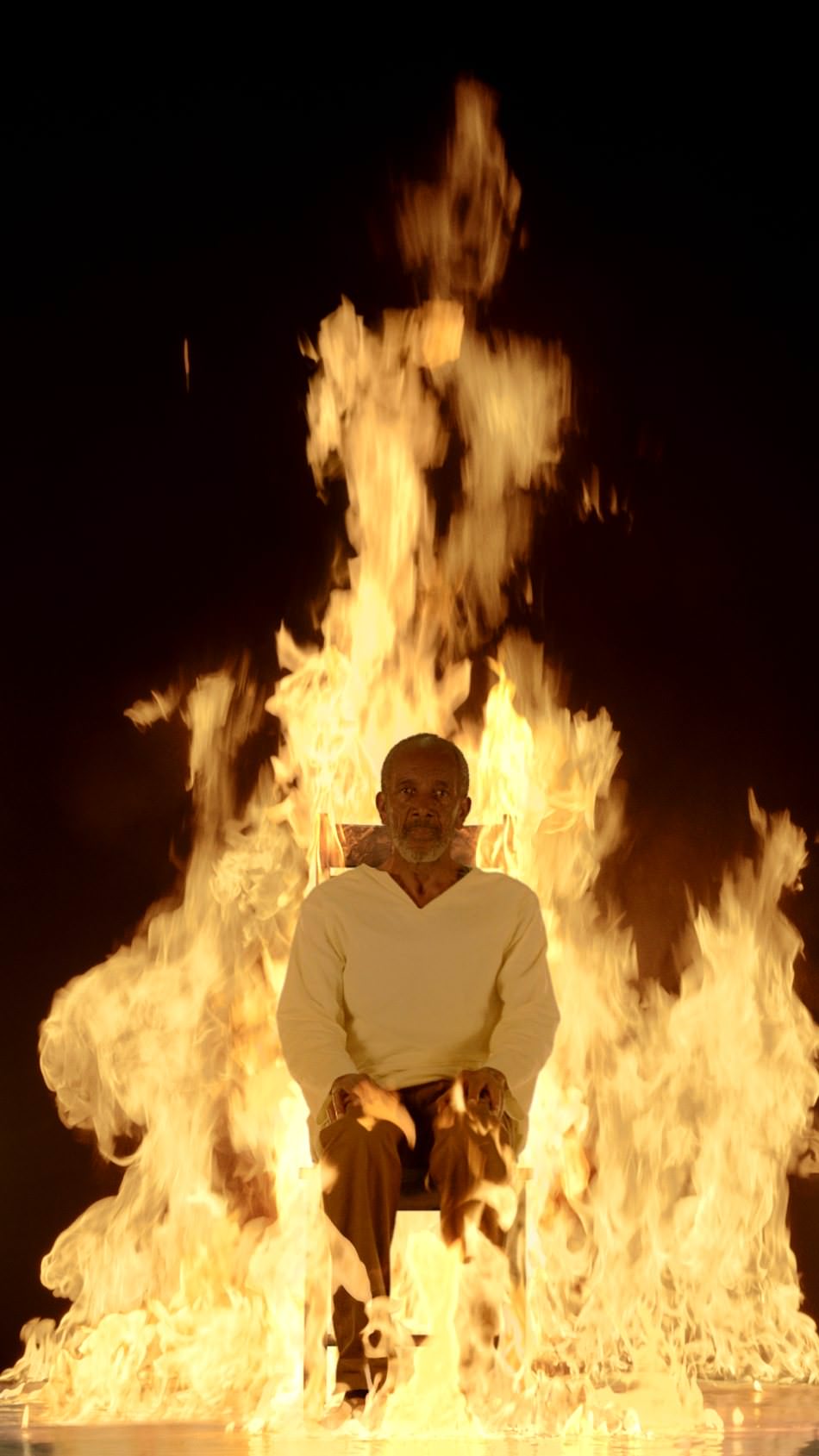 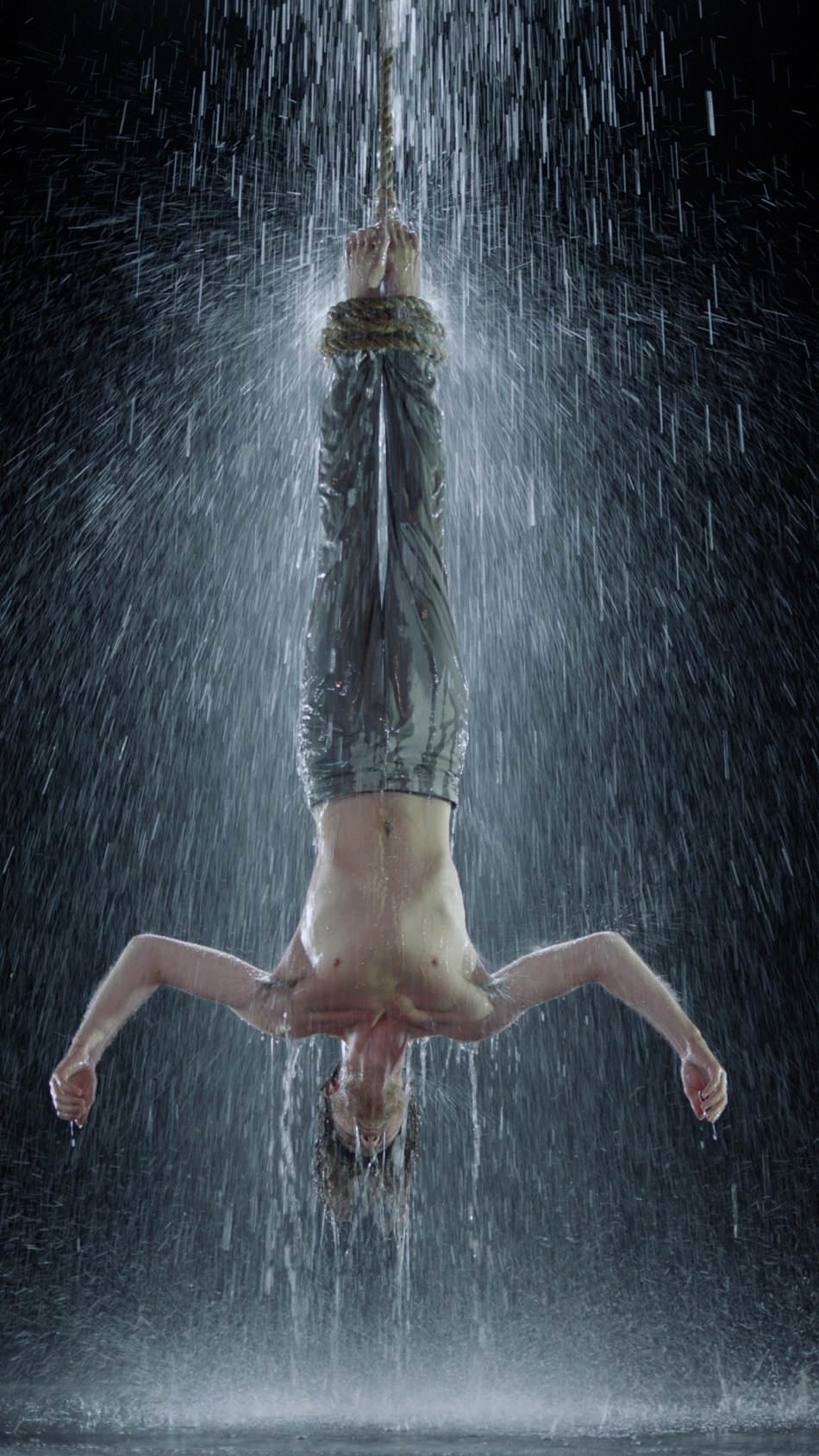 Martyrs repeats many of the themes and motifs that Viola has become known for since he started making video art in early 1970s, and although he is not a Christian—he calls his work “spiritual” and draws, he says, on a mixture of Zen, Sufism, and the mysticism of St. John of the Cross—much of his work carries its religious symbolism heavily. Before this new installation in St. Paul’s he has shown several pieces in churches and cathedrals. In his current retrospective at the Grand Palais in Paris, which includes work made between 1977 and 2013, there are several ascensions and deluges. Water is a constant. He is fascinated not just by its well-worn associations with birth, baptism, and washing clean but also by its slow effects of waving, rippling, and dissolving.

In Surrender (2001), two crying figures shot in super slow motion dip their heads in water. What we see are not the people themselves but their reflections, which, as the ripples pass back and forth across the surface, are broken and distorted into vaporous blurs which are not only beautiful to look at but also amplify the figures’ distress. It’s like a lachrymose and sentimental version of Bacon’s screaming Pope Innocent X. But the broader his spiritual brush, the less successful Viola’s work becomes. In Ascension (2000) we see a man plunging into dark water, the bubbles and gently flapping clothes minutely observed in shimmering pale blue. He sinks through the water, light shining through its surface and forming a cross in the bubbles behind him. Its slowness and solemnity exude an atmosphere of revelation, but the symbolism is hackneyed and heavy-handed.

Viola was one of video art’s earliest exponents, and is now one of its most popular and critically divisive. He was the first video artist to have a retrospective to himself, at the Whitney in 1998. When Ada Louise Huxtable saw a work called The Crossing there—which, with effects very similar to some of those used in Martyrs, shows a walking man being consumed by falling water and by flames—she wrote in The New York Review that it was “an unforgettable image” that “can be taken as a morality play or a stunning piece of visual theatre.” It’s a combination of mystical ideas and aesthetic drama that perhaps explains why crowds flock to his shows. The New Yorker’s art critic Peter Schjeldahl, though, is one of a chorus of dismissive voices: “unremittingly, emptily pretentious” and “a master of special effects passed off as spiritual epiphanies.” One of the most perceptive remarks has come from Roberta Smith. When she reviewed his Whitney exhibit for The New York Times she wrote that “it may be that Mr. Viola is better in small doses, in situations where you can contemplate his work without having to walk into another Viola.”

The reason for that is a mixture of portentousness and pace. Viola makes most of his work in slow motion, and a whole exhibition is agonizingly languorous. Most of his videos are very long, and the climaxes, when they come, are often vacant and predictable. Going Forth by Day (the title is drawn from the Egyptian Book of the Dead) is a huge five-video installation. One part shows a team from the emergency services packing up their kit after a flood in the desert, while a woman, wrapped in a blanket, waits by the water. Nothing much happens and eventually they all go to sleep. Then a man rises out of the water and up into the sky. It begins to rain, then the sun comes out and the people wake up. The piece lasts more than half an hour.

Martyrs is a modest work in comparison, brief in both length and, when seen in the vastness of the cathedral, scale. The screens are positioned at the east end of St. Paul’s in the Dean’s aisle, under a large plain-glass window. Through the wrought-iron gate to the left is the American Memorial Chapel, commemorating the American dead of WWII, their names listed in careful calligraphy in a big book. The other side of the cathedral, in a glass-topped case in a dark corner, is a book listing the names of modern martyrs. It is turned to the entries for the year 1977: Janani Luwum, the archbishop of Uganda murdered by Idi Amin; and Stephen Biko, the South African Black Consciousness leader who died after being beaten up in police custody.

The difference between Viola’s installation and these other memorials is that Martyrs is not about any particular people who died for any particular cause. It purports to be about martyrdom in general, and tries to capture a kind of resolute suffering. As images of martyrdom they are rather limp and risk-free. Some reviewers, and indeed Viola himself, have likened the figures to torture victims, and the man engulfed in flames calls to mind countless burnings at the stake as well as self-immolating Buddhist monks. But Viola’s pyrotechnic control is so accurate and attractive that somehow the man never even looks in danger—no wincing, no charring, no hint of sweat on his brow—and the comparison falls flat. What’s more, the figures aren’t so much serene as emotionally and psychologically blank. Two of them look out at the viewer towards the end of the videos, as though asking you to reflect on their plight. But because that plight is so sleekly captured their stares feel like empty pleas.

The effect is that the videos—when compared with many other depictions of martyrdom both old and new—are one-dimensional. They may have the dramatic lighting and deep dark background of Caravaggio (an artist to whom Viola has sometimes been compared because of his lights and darks), but they have none of the drama of his martyrdom of St. Peter: the clumsy executioners bending their backs to haul the cross upright, one of whom has muddy feet and calloused elbows; Peter himself, wretchedly straining his head up off the cross, his expression fearful and disbelieving; the execution itself as a chaotic, visceral, real-world event. Nor do they have the genuine peace of Zurbarán’s St. Serapion, swathed in his white habit, hanging by his wrists, his head lolling to the side and his cheek and lower lip hanging loose from his jaw—the quietness of the picture resonating with the terrifying disembowelment St. Serapion is supposed to have suffered. Perhaps the most memorable recent depiction of martyrdom comes in Hilary Mantel’s novel Wolf Hall. The killing of the Lollard Joan Boughton is a grim spectacle that makes the suffering and isolation, not only of the martyr but of her fellow believers, palpable and moving. As she is brought to the pyre, the crowd shouts and jeers. The torch that lights the straw does not blaze but is “pale in the sunshine.” As she burns the crowd cries “Smell her!…Smell the old sow!” The day after, her companions come to collect the remains: “mud and grit, fat and ash.” Mantel shows martyrdom as an experience not just of resolution, but of grotesque humiliation.

Viola’s videos, by contrast, rely on a series of predictable tropes—the cruciform attitude, the heavenward glance, the light shining down—simplistically and glamorously employed. And because we know nothing about these figures, and nothing about what they are enduring for, the videos set up a troubling and sentimental connection between suffering and sanctity, a pose easily adopted whether one’s cause is respectable or not. They borrow their aura of godliness from their surroundings.

The Venice Biennale: The Good, the Bad, and the American

In addition to the usual gaggle of curators and museum directors, vulpine collectors, slithery yacht-borne oligarchs, and pop celebrities a decade or more removed from their last hit record, this year’s Venice Biennale drew in a handful of politicians as well. But if Venice is still the premier international contemporary-art…