Every age is one of anxiety. But few have responded with art more deeply serene than that of the Kamakura Period in Japan (1185-1333). Following a murderous clash of clans in civil war, and the widespread destruction of temples and statuary, Buddhist artists, at first based chiefly in Nara and Kyoto, devised both new techniques to allow the rapid replacement of what had been so wantonly destroyed, and a new style to inspire and to calm the shattered spirits of the survivors. The result was one of the great flowerings in Japanese art.

A show of Kamakura sculpture, “Kamakura: Realism and Spirituality in the Sculpture of Japan,” has just opened at the Asia Society in New York, the first American exhibition on the subject in more than thirty years. The show is very small—just one room with only about two dozen statues and another dozen or so items—and yet it is rapturously beautiful and deserves more visitors than its scale might suggest.

By expressive character, the sculptures on view can be broadly divided in two contrasting modes. One consists of statues, such as those of the Wisdom Kings Fudō Myōō and Daiitoku Myōō, that display vivid gestures and grimacing faces. These statues depict wrathful manifestations of the Buddha, who by fear quell the rebelliousness of mankind and destroy avarice, anger, and folly. Similarly, the Head of the Guardian King, once part of a sculpture who possibly stood watch at the gate of a temple, also has ferocious and exaggerated features. 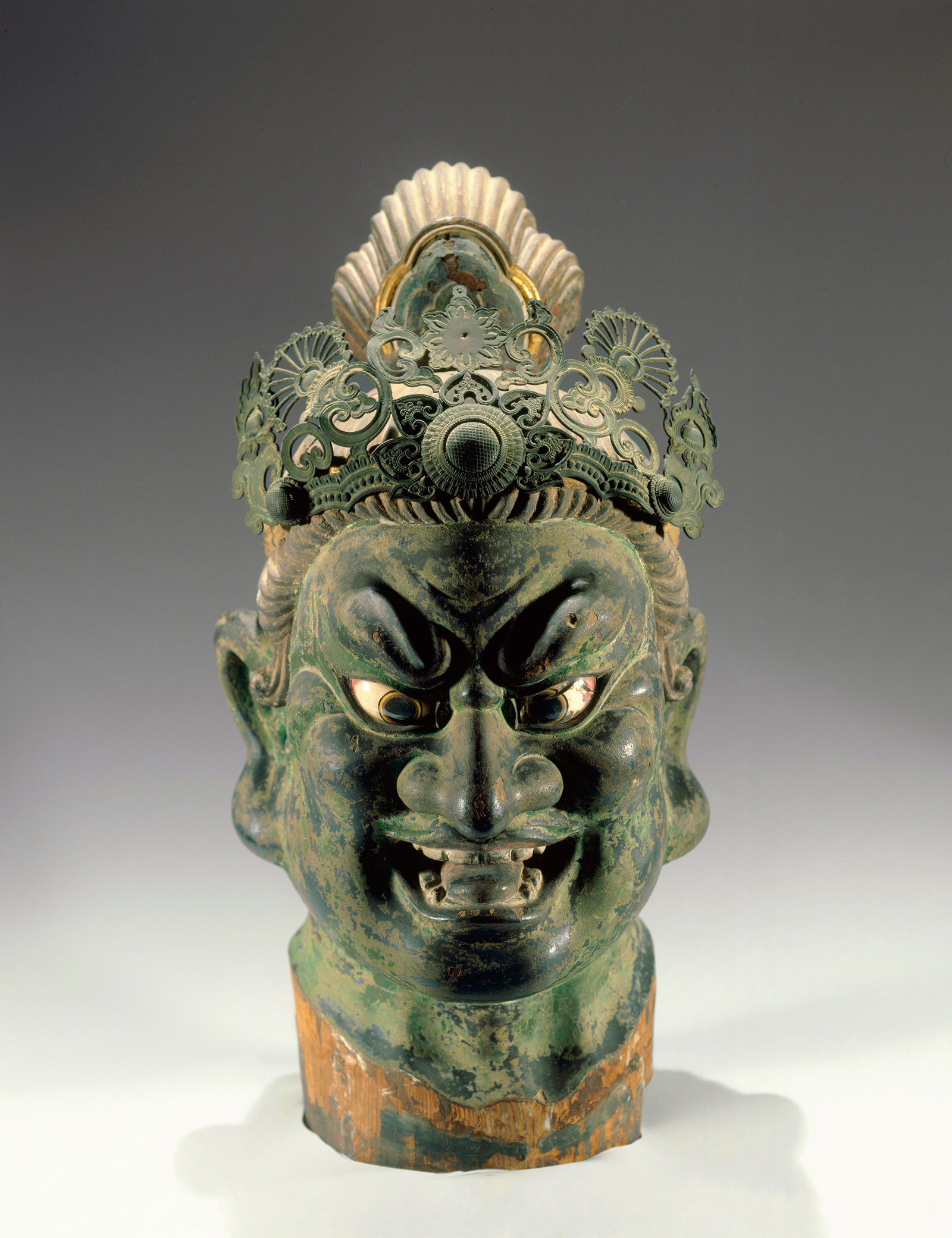 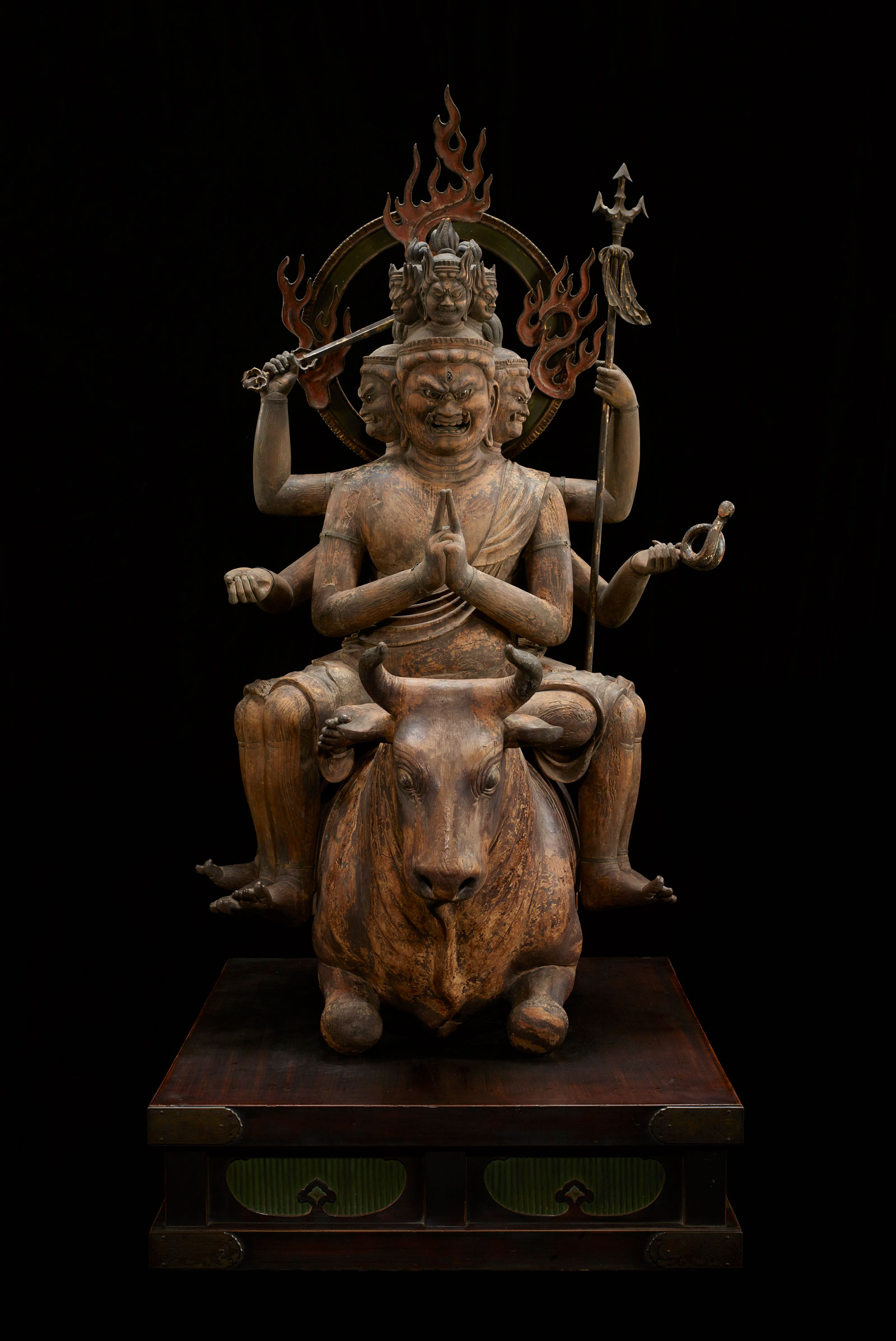 The Minneapolis Institute of Art 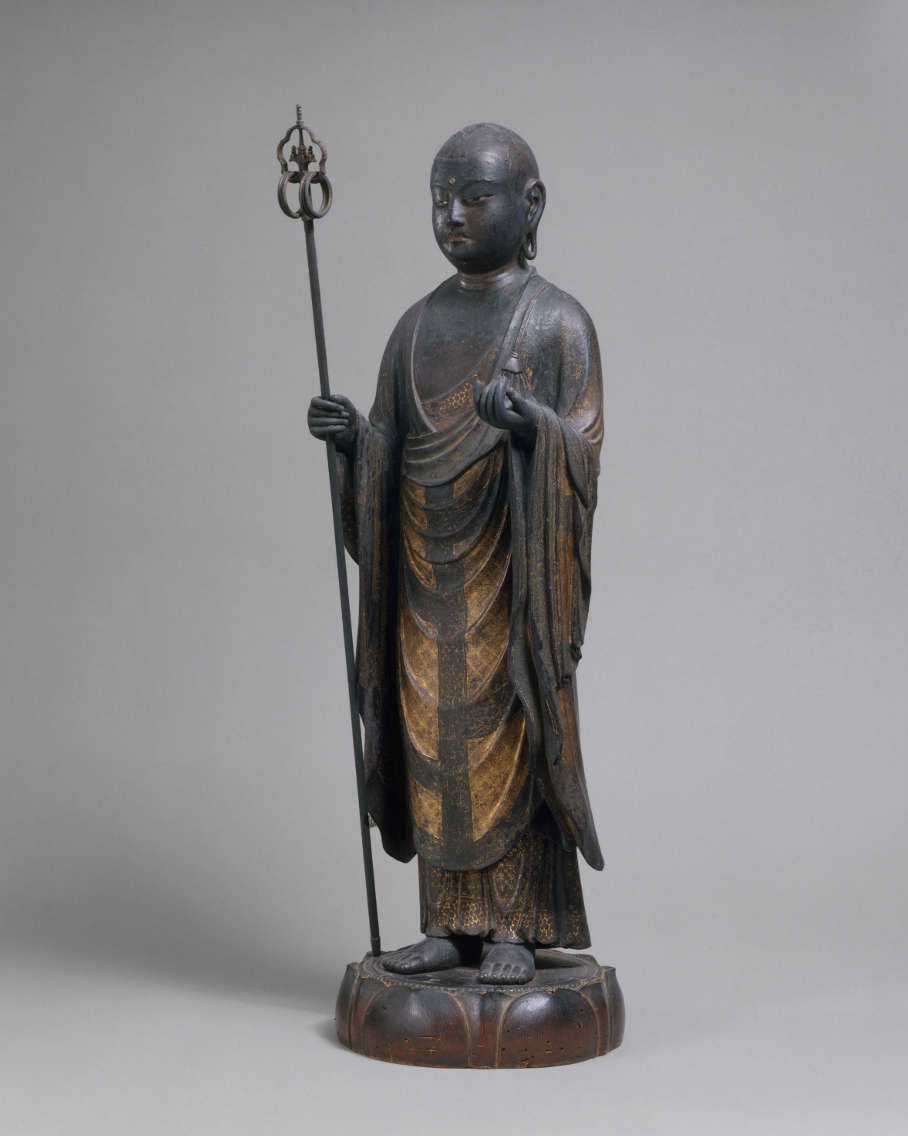 The Metropolitan Museum of Art/Art Resource

Statue of the Bodhisattva Jizō Bosatsu by Kaikei, Kamakura period, circa 1202 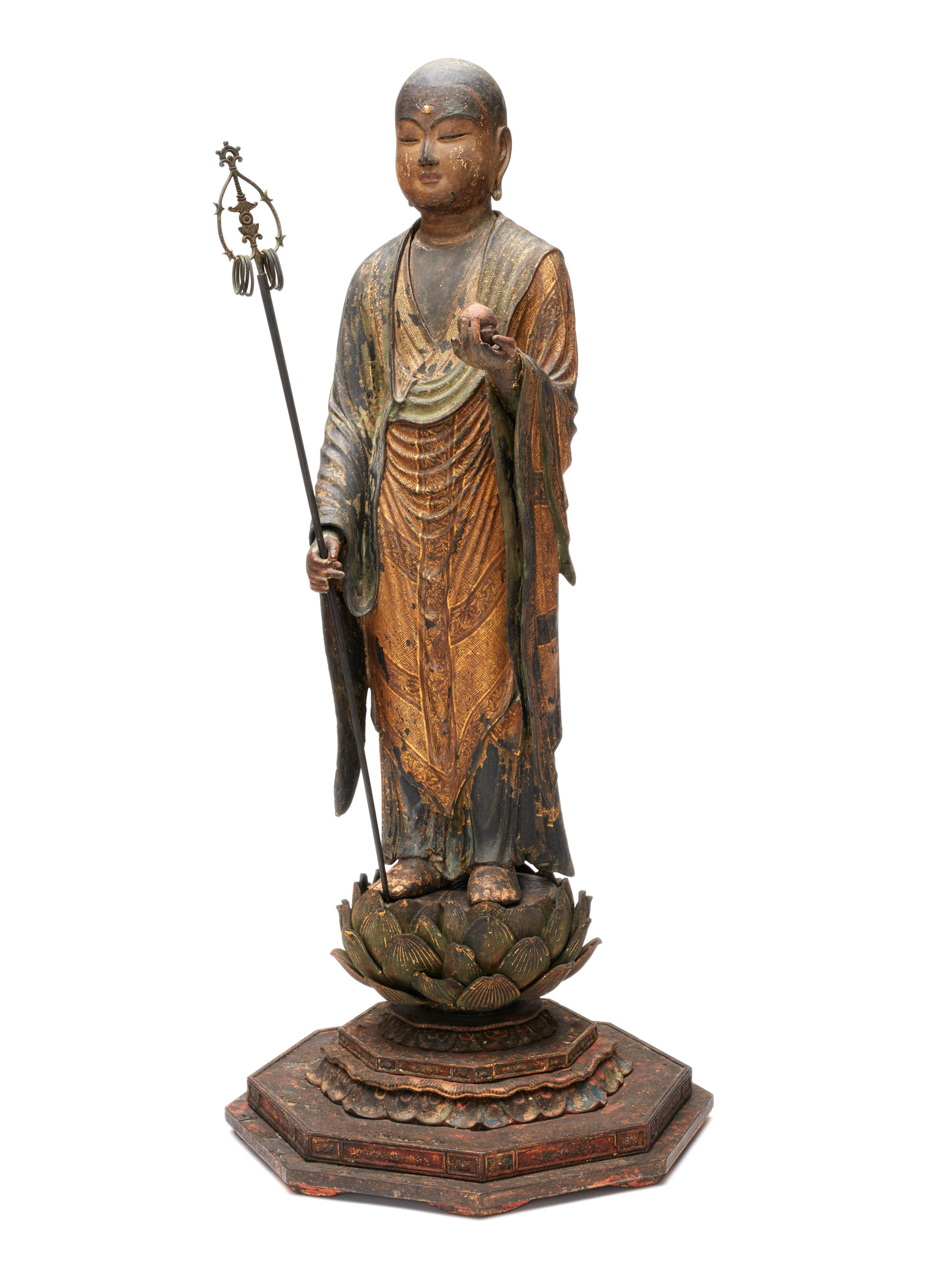 Statue of the Bodhisattva Jizō Bosatsu by Zen’en, Kamakura period, circa 1225–26 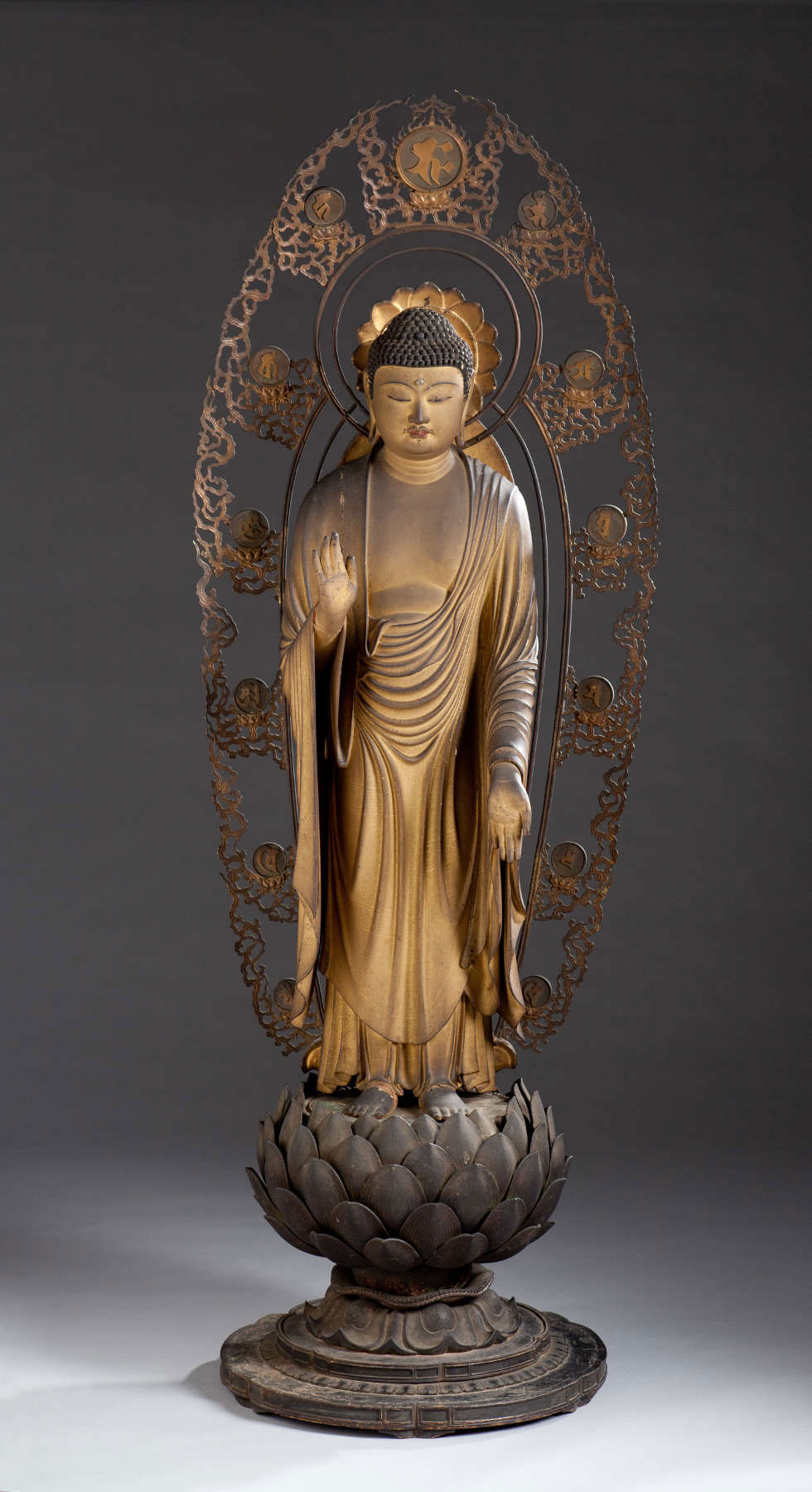 Statue of the Standing Shaka Buddha by Kaikei, Kamakura period, circa 1210 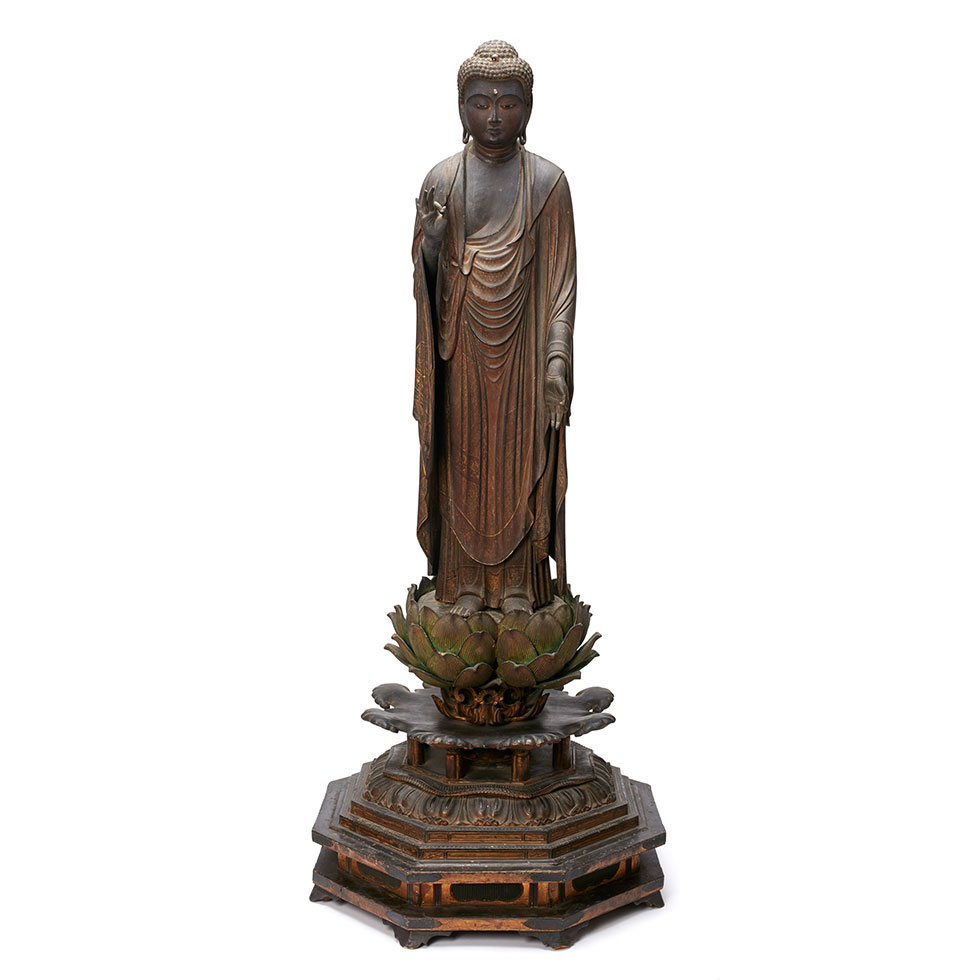 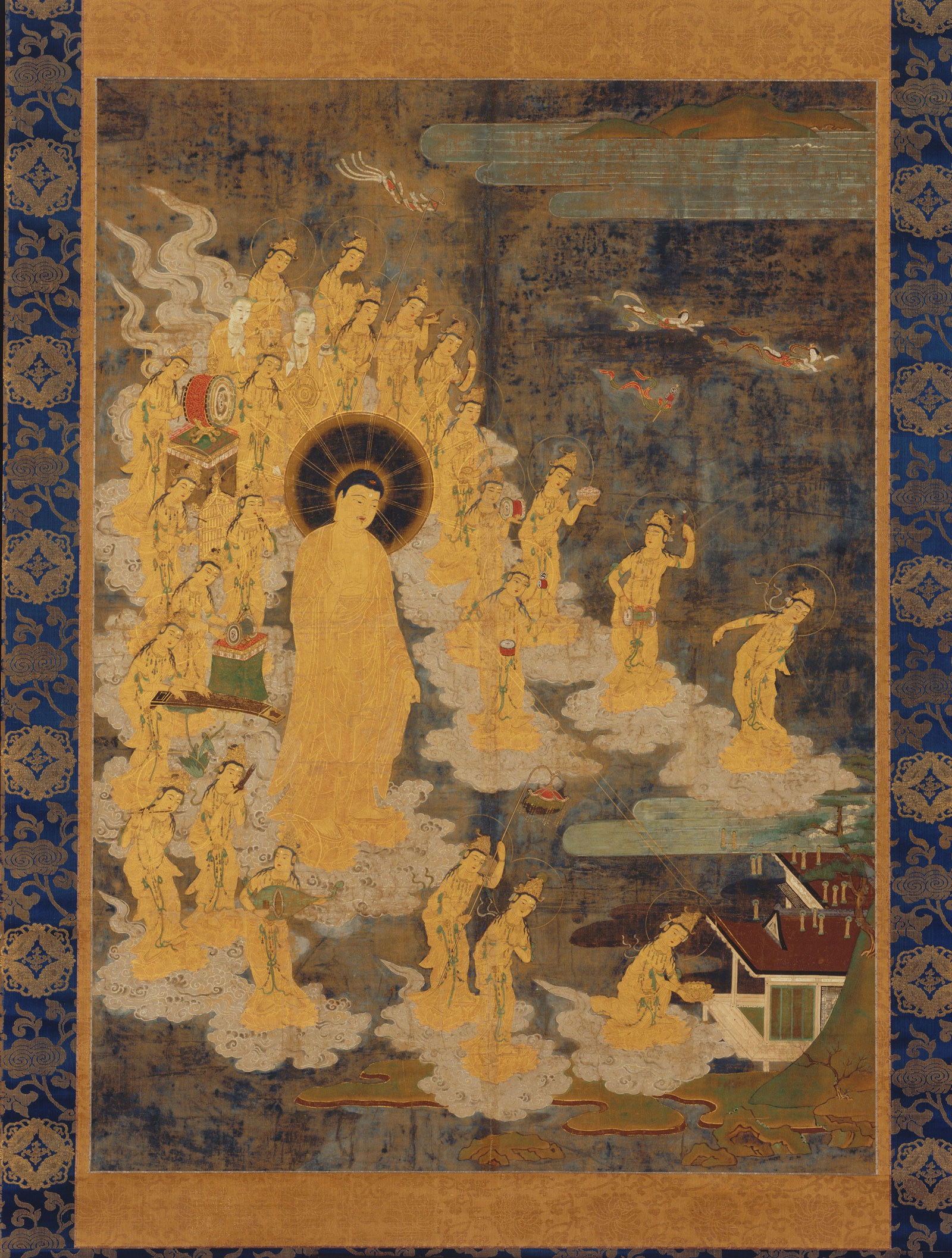 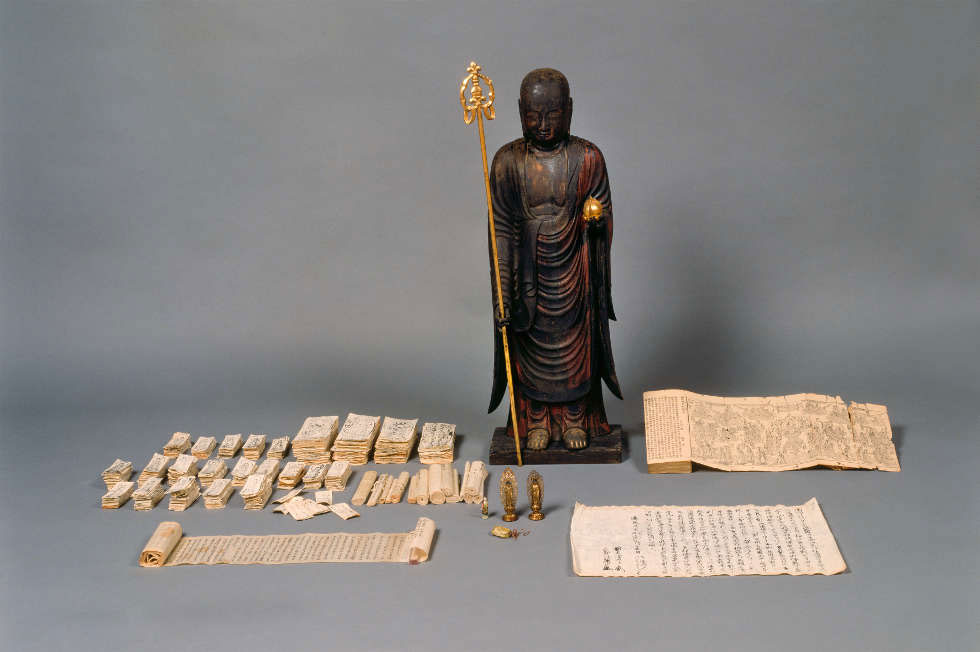 Statue of the Bodhisattva Jizō Bosatsu and selected contents by Kōen, Kamakura period, 1249

In a different mode, however, are the statues of utter tranquility, particularly the bodhisattva Jizo Bosatsu and the Buddha Amitabha, two of the most widely worshipped figures in the Kamakura period. These mesmerizing sculptures show the sacred being standing quietly above an opening lotus blossom, and dressed in monk’s robes whose folds fall in a cascade of graceful waves. Their power to entrance arises from the near-perfect balance of motion and stillness, symmetry and asymmetry, they display. They do not move and yet they seem to radiate peace. That this effect was intended is perhaps suggested by one painting in the exhibition, Descent of Amida Buddha with Twenty-Five Bodhisattvas, which shows the Buddha posed and floating downward as it casts sacred light on the devotee in the house below.

Kamakura statues are miracles of technique. Carved in wood, and hollowed out so that the skin of the sculpture in some parts is not much thicker than cardboard, they weigh almost nothing. They hover on the verge of immateriality, which is perhaps especially fitting for Buddhist imagery. Moreover, the inner cavities of the statues were used both as a place to record inscriptions, and as a chamber to contain relics and other items. One statue of Jizo Bosatsu is shown with its contents displayed around it: fascinatingly, these include one thousand votive prints, several scriptures, three statuettes, and a tiny drawstring bag containing a relic of the Buddha.

We know that the artists who made these works thought of them as animate presences. Nearly a thousand years later the sculptures live on still.

Kamakura: Realism and Spirituality in the Sculpture of Japan is on view at the Asia Society through May 8.

Ever since I arrived in Nepal in 1975 as a Peace Corps volunteer, I have been taking photographs of the country. In the 1980s, I traveled the country by foot with a tripod-mounted camera. The photographs I took during this period show village and farm life continuing much as it…

Akira Kurosawa’s Ikiru may have looked a bit more broad and didactic than I remembered. But since I moved to Japan, the film somehow still touches on a world that grows deeper within me every autumn.