Kant famously declared that two things struck him with awe: “the starry sky above me and the moral law within me.” Had the neural architecture of the brain, where moral law and visual perception meet, been revealed in Kant’s day, it might have provided him with a third revelation of wonder. But it wasn’t until the late nineteenth century that brain structures began to be uncovered, by a Spanish microscopist called Santiago Ramón y Cajal. As an undergraduate in neuroscience and then medicine I was given Cajal’s drawings to study—they have a timeless elegance and enduring value for students. A new book, The Beautiful Brain, collects some of his finest.

Cajal was a neuroanatomist, artist, and ultimately Nobel laureate. Born in 1852 in a small village between Pamplona and Zaragoza, the son of an overworked family physician, Cajal intended not to be a doctor but an artist. In the dissection room of Zaragoza Medical School he satisfied what he thought of as his mania for drawing as well as his father’s expectation that he study medicine. He showed determination and patience: “Once I spent twenty hours continuously at the microscope,” he wrote, “watching the movements of a sluggish leucocyte in its laborious efforts to escape from a blood capillary.”

Before Cajal, microscopists struggled to make sense of brain tissue—composed of whorls of neurons wrapped and knotted more densely than a briar thicket. The breakthrough came in 1873, when Camillo Golgi, an Italian histologist (someone who studies the microscopic structure of tissues) in Pavia, developed a technique for staining just a few neurons in any slice of tissue. Suddenly it was as if those tangles had been rendered invisible, and one or two sinuous branches became newly apparent, charmed into luminescence.

Golgi’s technique was unreliable but Cajal refined it, and soon was turning out images of spell-binding clarity. He showed that neurons were discrete units rather than interconnected in a web, as Golgi had thought. Through marathon sessions in the lab he followed the connections of multiple brain cells, then, like a portraitist, drew an idealized version that captured the essence of each cell. Cajal’s work was testimony to the truth of Leonardo da Vinci’s idea of “disegno” as both drawing and understanding; the art critic John Berger wrote that in order truly to appreciate an object, you had to draw it. Cajal showed that “dendritic spines” were tiny receivers scattered over cellular inputs, rather than just artifacts of staining, as had previously been thought. Observing how supporting cells, “astrocytes,” make contact with both neurons and capillaries, he theorized (correctly) that astrocytes augment the blood flow to areas where brain cells are working hard. He mapped connections the length of the spinal cord, showing how muscle movements are initiated and refined.

Though he had no neurophysiological equipment or expertise, Cajal demonstrated solely through observation of the retina that “dendrites” funnel electrical influences toward the center of each neuron, while “axons” combine and distribute each cell’s output, and was able to extrapolate that knowledge to the rest of the brain. Before Cajal, no one understood why optic-nerve fibers cross over in the brain so that objects in the right field of vision are perceived on the left. He showed that this anomaly frees us to perceive objects as coherent wholes. 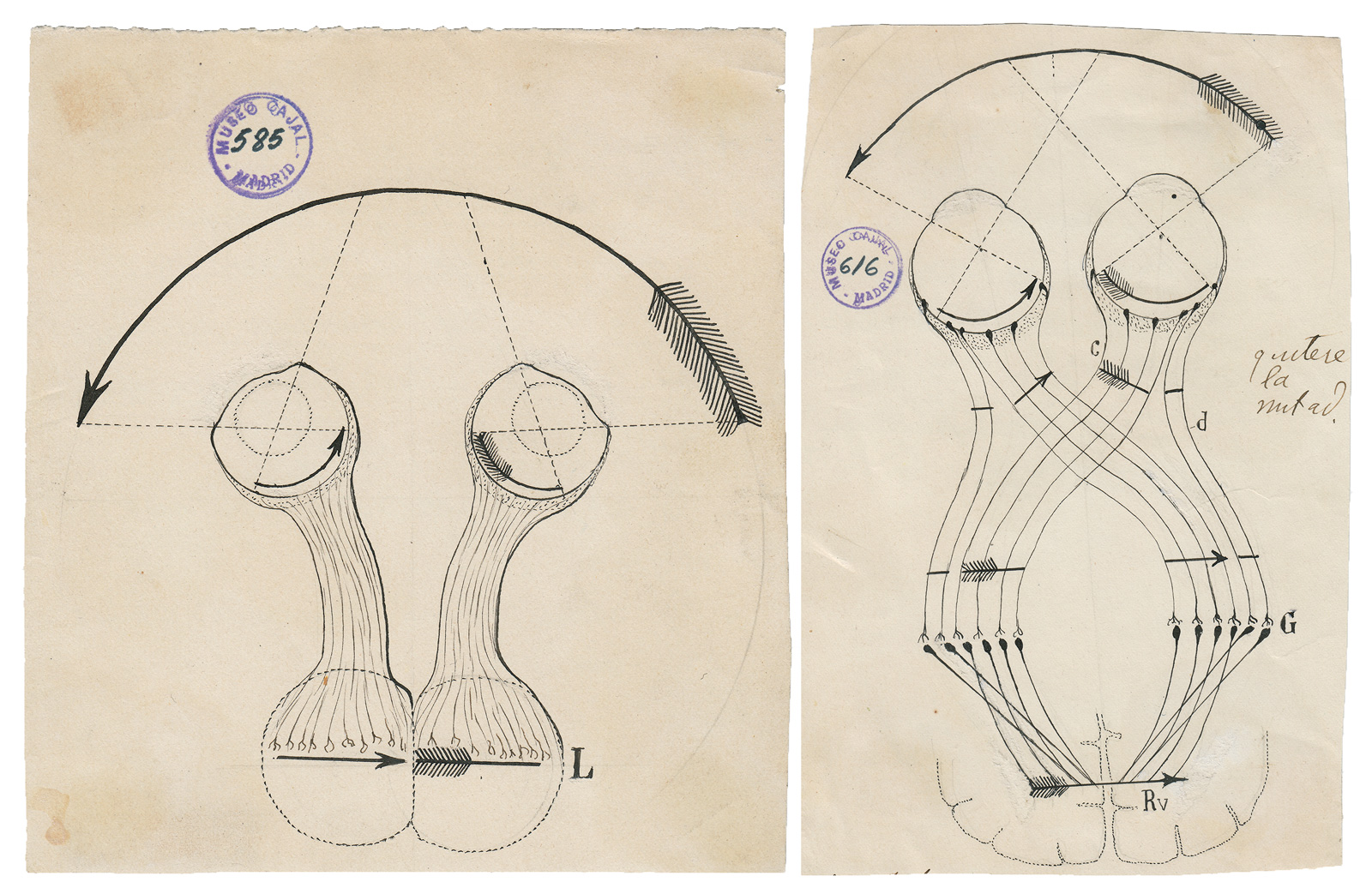 Diagrams indicating how information from the eyes might be transmitted to the brain, 1898 (left) and 1904 (right) 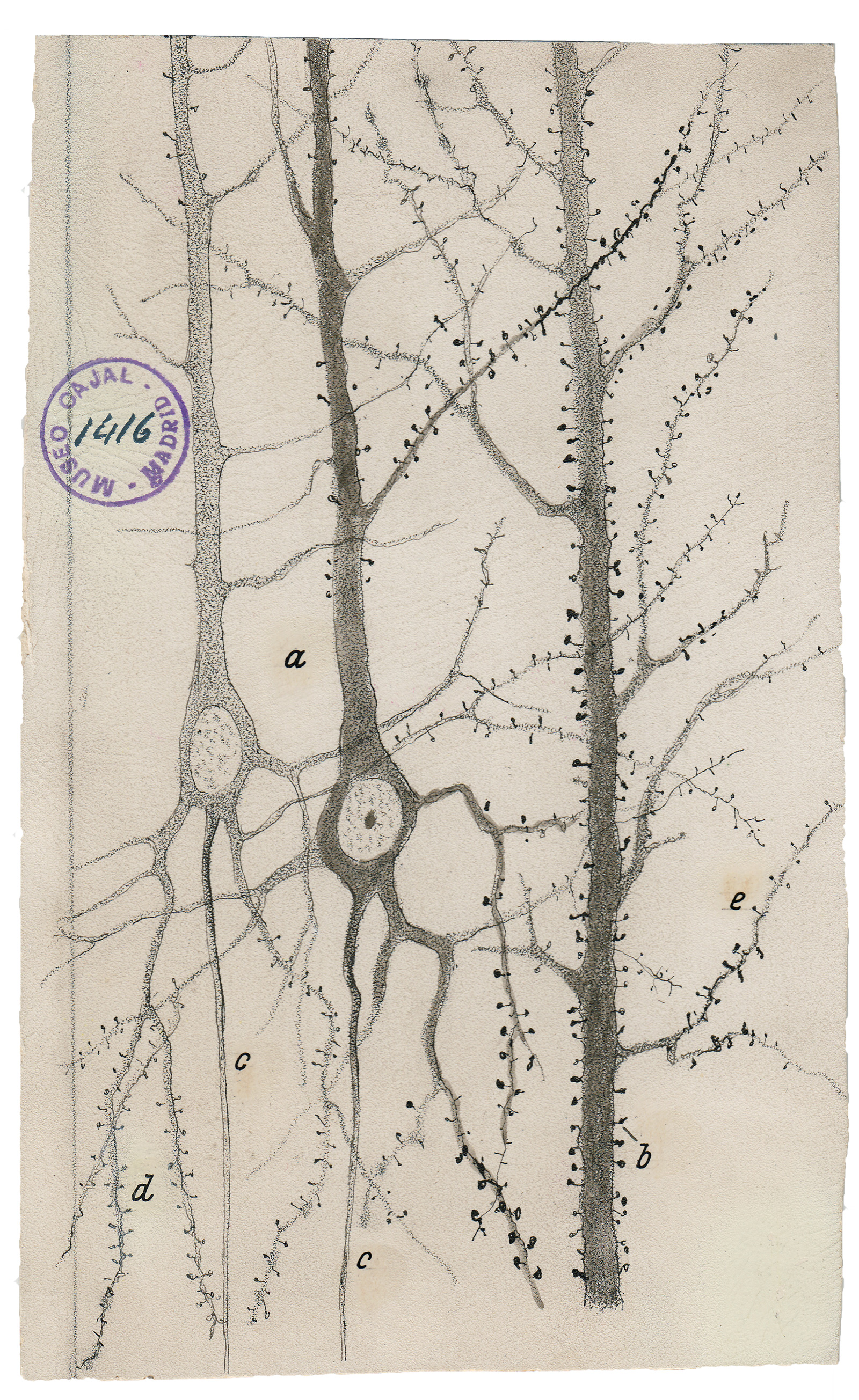 Drawing of dendrites of pyramidal neurons of the rabbit cerebral cortex, 1909 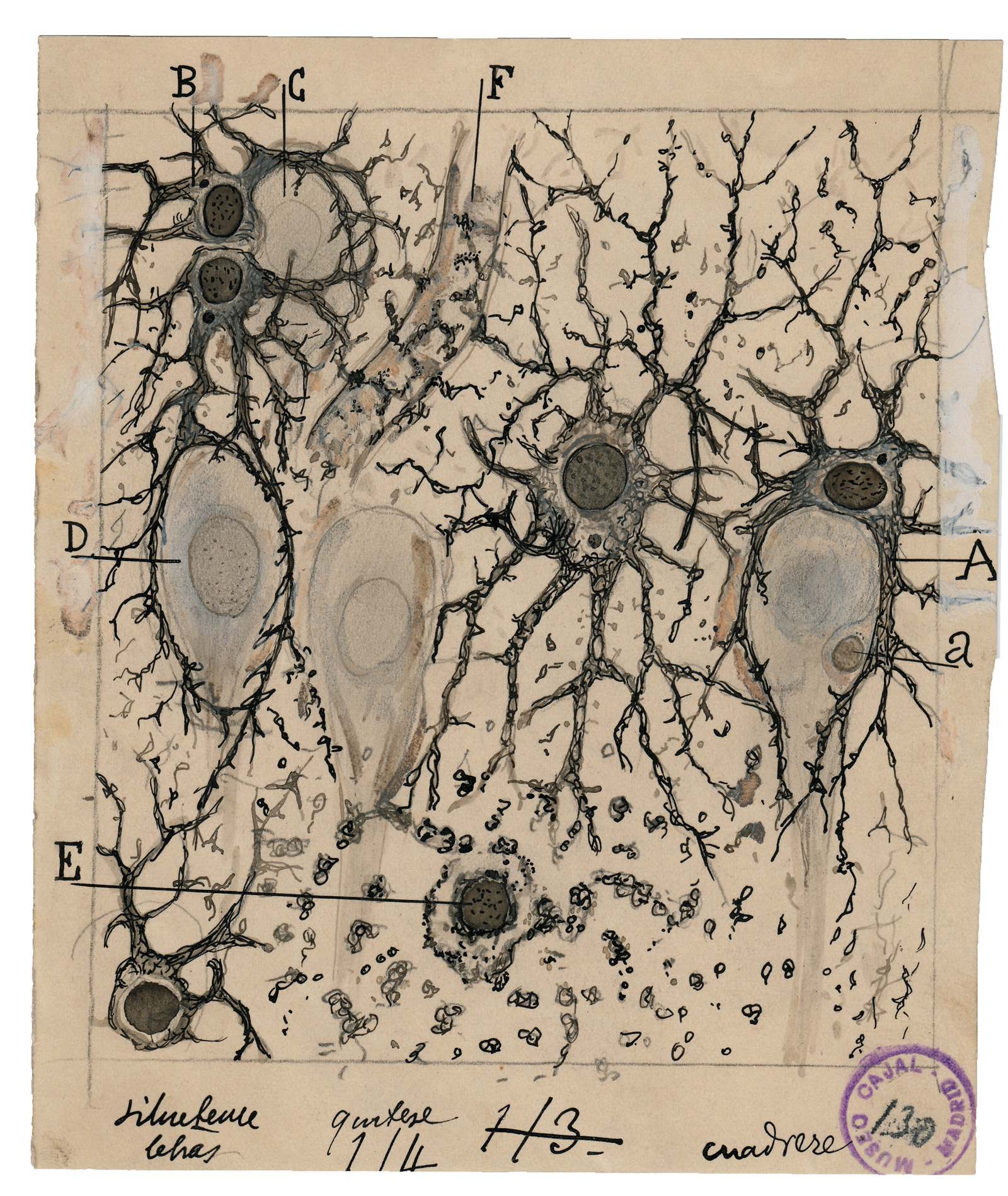 Drawing of astrocytes in the hippocampus of the human brain, 1912 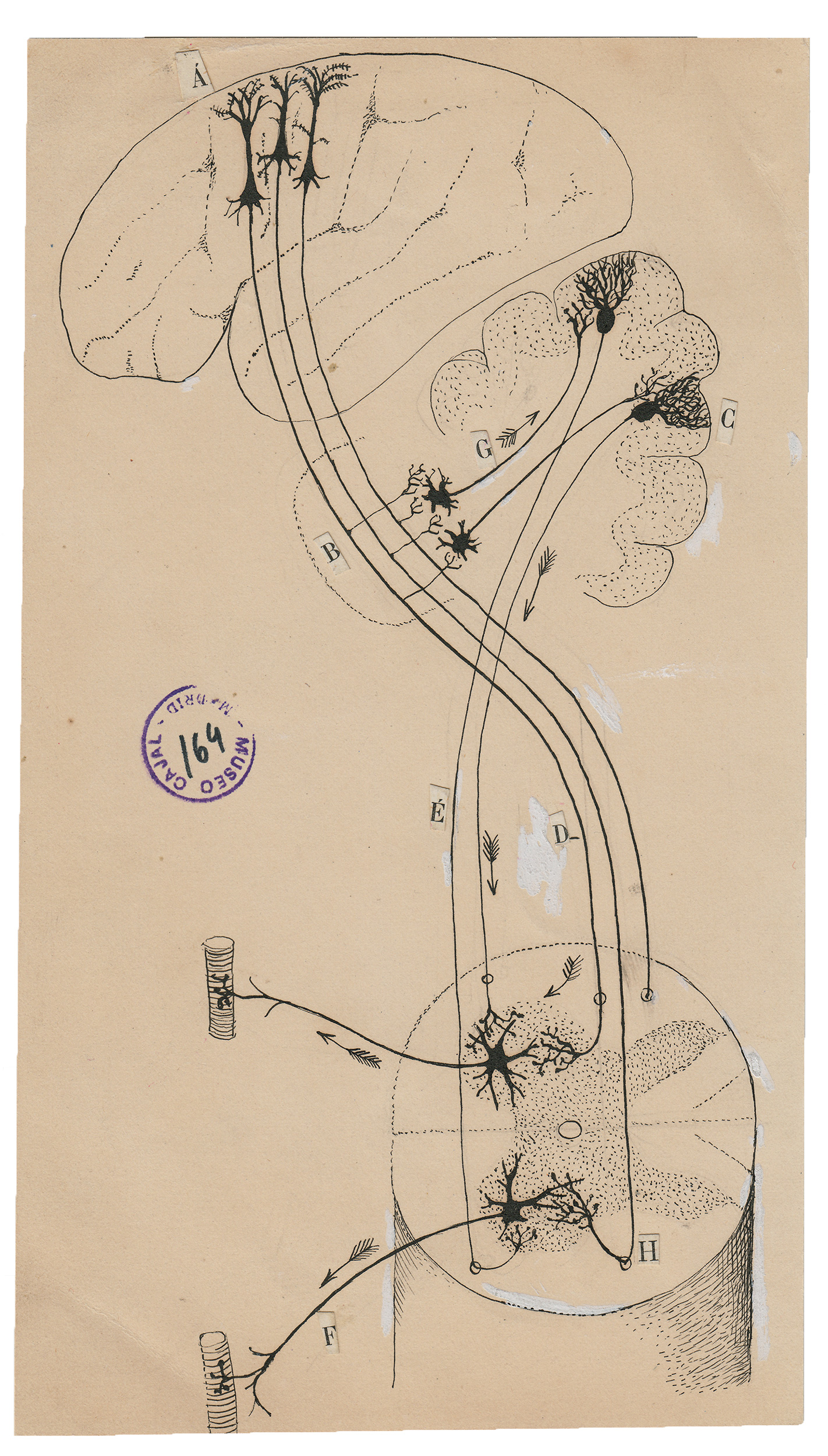 Drawing of two pathways that control our muscles, 1921

For Cajal the brain was a beautiful, inconceivably complex, and self-regulating ecosystem, and he set out to write the field guide to its flora and fauna: “Like the entomologist in pursuit of brightly colored butterflies, my attention hunted, in the flower garden of the gray matter, cells with delicate and elegant forms, the mysterious butterflies of the soul, the beating of whose wings may someday—who knows?—clarify the secret of mental life.” Cajal was particularly interested in the large “pyramidal” neurons found in the cerebral cortex, which he called “psychic neurons”—the substrate of thought and of action. “The pyramidal cells… send their roots deeper,” he wrote, “and produce more exquisite flowers and fruits every day.”

When the Nobel Committee awarded Cajal and Golgi a joint prize for their work, they commented that it was Cajal who, with respect to the brain, “has built almost the whole framework of our structure of thinking.” To look through this book is to experience a kind of enchantment—Cajal shrinks our perspective to the micron scale and reveals the Gothic grandeur of neuroanatomy: the precise labyrinth of the inner ear, the spiral memory circuits of the hippocampus, the intricate majesty of cerebellar cells, the layered sophistication of the retina. 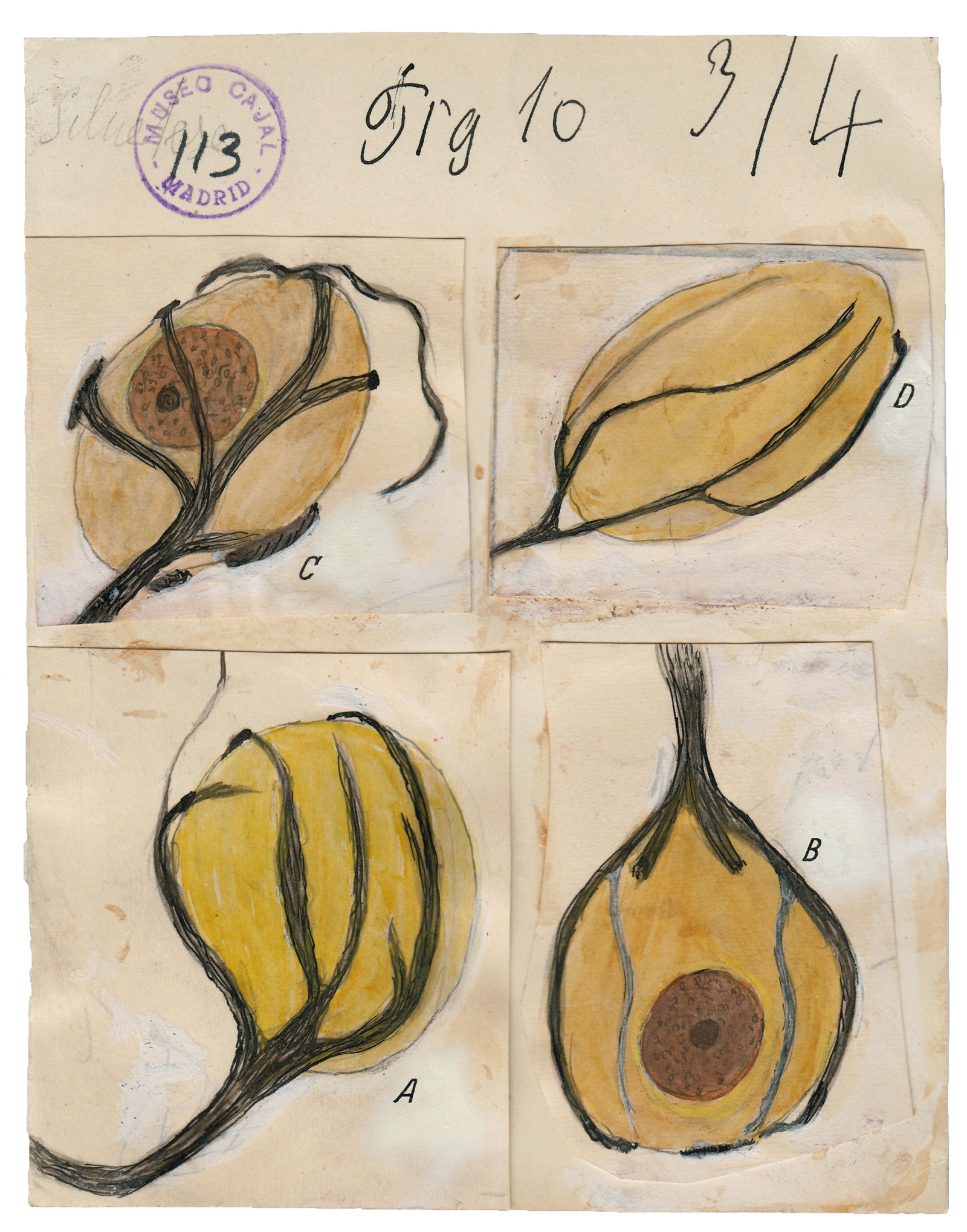 Drawing of the calyces of Held (synapses made by axons carrying auditory information and contacting neurons) in a brainstem structure called the the trapezoid body, 1934 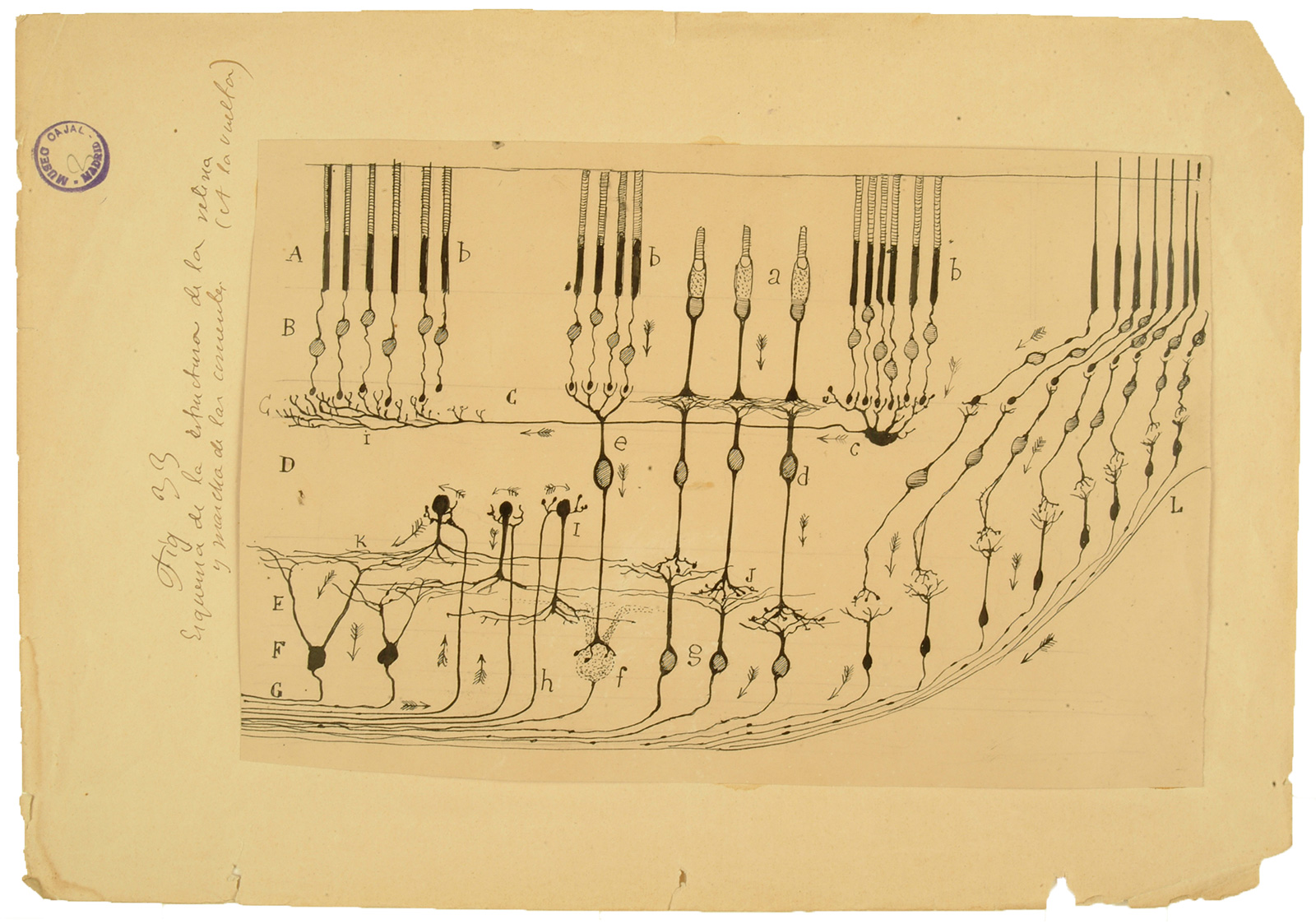 Drawing of the structure of the retina indicating the flow of information, 1901 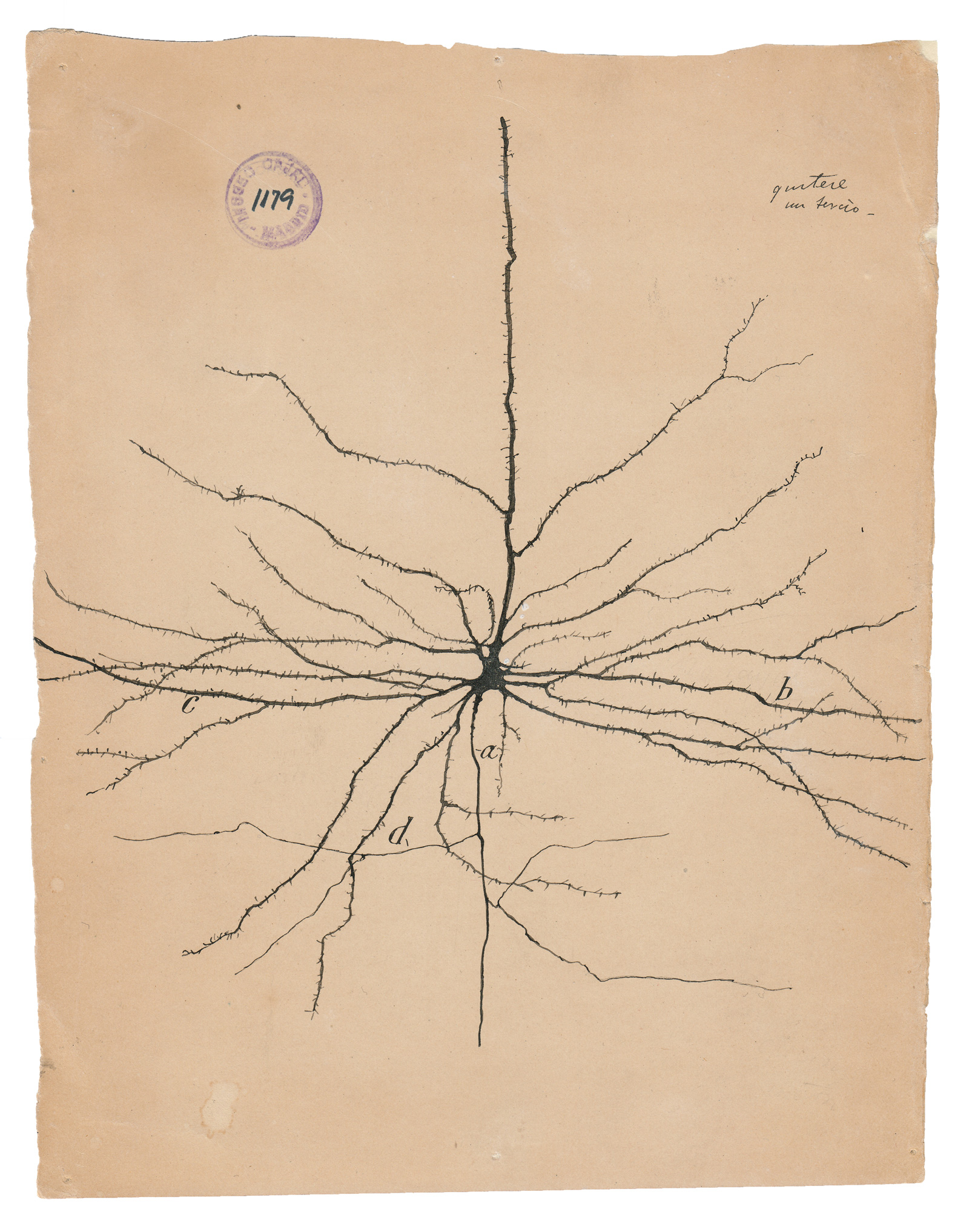 Drawing of the pyramidal neuron of the cerebral cortex, 1904 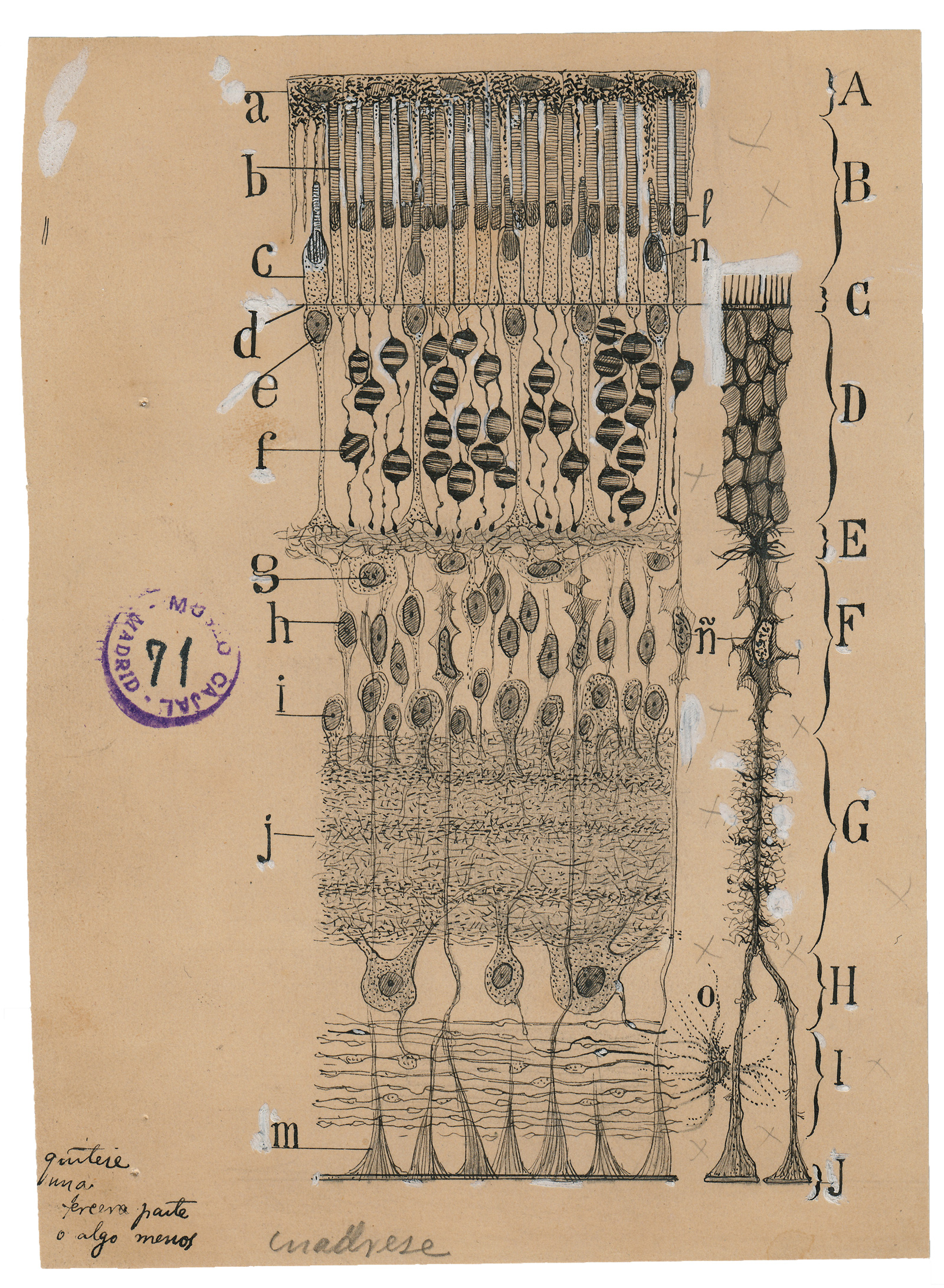 Drawing of cells in the retina of the eye, 1904

While leafing through The Beautiful Brain I was frequently reminded of Thomas Browne’s assertion that “we carry within us the wonders we seek without us.” Browne was a seventeenth-century physician, perennial enthusiast, natural philosopher, and truth-seeker, and of all the innumerable marvels of the cosmos he reckoned the human body the most mysterious. Two and a half centuries later Cajal agreed, and his work holds up the human brain as the paramount marvel of all. “As long as our brain is a mystery,” Cajal wrote in 1921, “the universe, the reflection of the structure of the brain, will also be a mystery.” He arranged brain cells on the page in constellations as beautiful and wondrous as anything brought to us by astronomers or moral philosophers.

Two memoirs consider what’s gained and lost when a new language is acquired and a mother tongue is all but forgotten.

The prostate has caused difficulty for men and medicine for centuries. A new “biography of the prostate” examines the haunting terror it creates.

Two memoirs consider what’s gained and lost when a new language is acquired and a mother tongue is all but forgotten.

The prostate has caused difficulty for men and medicine for centuries. A new “biography of the prostate” examines the haunting terror it creates.

Gavin Francis is a primary care physician in Edinburgh. His most recent book, Recovery: The Lost Art of Convalescence, was published in the UK in January. Island Dreams: Mapping an Obsession was published in Italian last year. (May 2022)

The Mysterious World of the Deaf

Lydia Denworth’s ‘I Can Hear You Whisper: An Intimate Journey Through the Science of Sound and Language’