Jamaica, as island politicians and historians of pop music have grown fond of saying, is a country whose cultural impact has been wildly disproportionate to its size. From the golden era when Bob Marley became the “first third-world superstar” to the fact that many of today’s global hits borrow from Jamaican beats, reggae music and the dancehall subgenre—often described as its raucous younger sibling—have had an outsize influence on popular music and popular culture the world over.

The sound and focus of Jamaican music shifted in the Seventies with advances in technology, economic instability, and the politically motivated violence fostered by the warring conservative Jamaica Labour Party (JLP) and social-democratic People’s National Party (PNP). It was a dangerous time, but also a fertile one for experimentation in what would come to be known in the Eighties as “dancehall,” named for the early venues where new popular forms of dance arose with the new forms of music. The photographer and writer Beth Lesser’s recently reissued Dancehall: The Rise of Jamaican Dancehall Culture documents its development—with text and a generous selection of the author’s own photographs—from its inception in the Fifties to its zenith in the Eighties and beyond.

Though not totally distinct from reggae—which developed around Jamaican independence from Britain in 1962, and is now understood to be a catch-all label for Jamaican music—dancehall tends to be faster-paced and sound more machine-produced, with rap-chatting or singing over a danceable beat. Reggae, with its characteristic “skank” guitar on the upbeat, is today more associated with the “roots” sound of artists like Bob Marley and the Wailers, Dennis Brown, and Burning Spear (or some songs by contemporary artists like Chronixx and Protoje). Dancehall by comparison is usually louder and sometimes raunchier or more violent. For this reason it is more often criticized by the self-appointed moral guardians among Jamaica’s upper class and Christian community for the “slackness” of its lyrics and dance moves. Dancehall, sung in patois, is also avowedly local.

Lesser, who is originally from New York and has lived in Canada for forty years, started a reggae magazine with her partner, David Kingston, in 1980. Over the next decade she traveled back and forth to Jamaica, taking the photos in Dancehall. It’s notable that many of the documenters of reggae and reggae culture over the years have been attracted to it from afar. Lesser wrote a number of books, one about the digital revolution in Jamaican music, King Jammy’s (1989), after the influential dub-master and record producer who began his work at the Kingston recording studio of King Tubby, a sound engineer credited as an innovator of dub.

Because Dancehall is a collection of photographs and not 45s, the book is best at conveying the stars and styles of the day: the heartthrob vocalist Gregory Isaacs in a camel felt hat and tortoise-shell shades, holding out a cup to be filled by a disembodied bottle-in-hand; at a dance, DJ Jah Stitch—immaculate in white, a spliff pinched between two fingers—blows out smoke onto a record as a man with fingers placed carefully on the soundsystem looks on warily; the global hit artist Yellowman, smiling in full camo and yellow-tinted glasses, his arms wrapped around two youths, one looking mischievous, the other bored. The fashion is exquisite. Imports from England and Scotland—three-piece suits, Clarks booties, pinstripes, tweed—were in high demand, no matter the heat of the Caribbean sun. Mix that with the Kangol hat and bling of Eighties hip hop, and finish with a Jamaican touch—an open belt, a partially unbuttoned Arrow shirt, or a mesh tank top—and the look is complete. As the saying goes in Jamaica, Style a style and style cyan’t spoil. Lesser captured a particular fashion moment, one that developed in tandem with the musical movement and has evolved today to include flashy colors and patterns, bright wigs, tattoos, latex, and other bold innovations. Photographs like Ruddy Roye’s—which skillfully capture both brazen physicality and subtle exchanges, and convey a rawness and immediacy through their high contrast—show some of the more recent developments, but the pomp and swagger remain.

Alongside Lesser’s sharp sartorial survey is a detailed cultural history. Dancehall is organized much like a textbook, with a main chronological narrative and full-page images supplemented by additional subtopics, and an introduction that explains how various strands of Jamaican cultural history fed the flourishing of its music in the Seventies and Eighties. Starting in the late Fifties in Kingston, music rivals would string up soundsystems—turntables mounted on large, custom-made amplifiers powering huge speakers—and battle for the crowd’s approval in a party tradition that came to be called the “sound clash.” 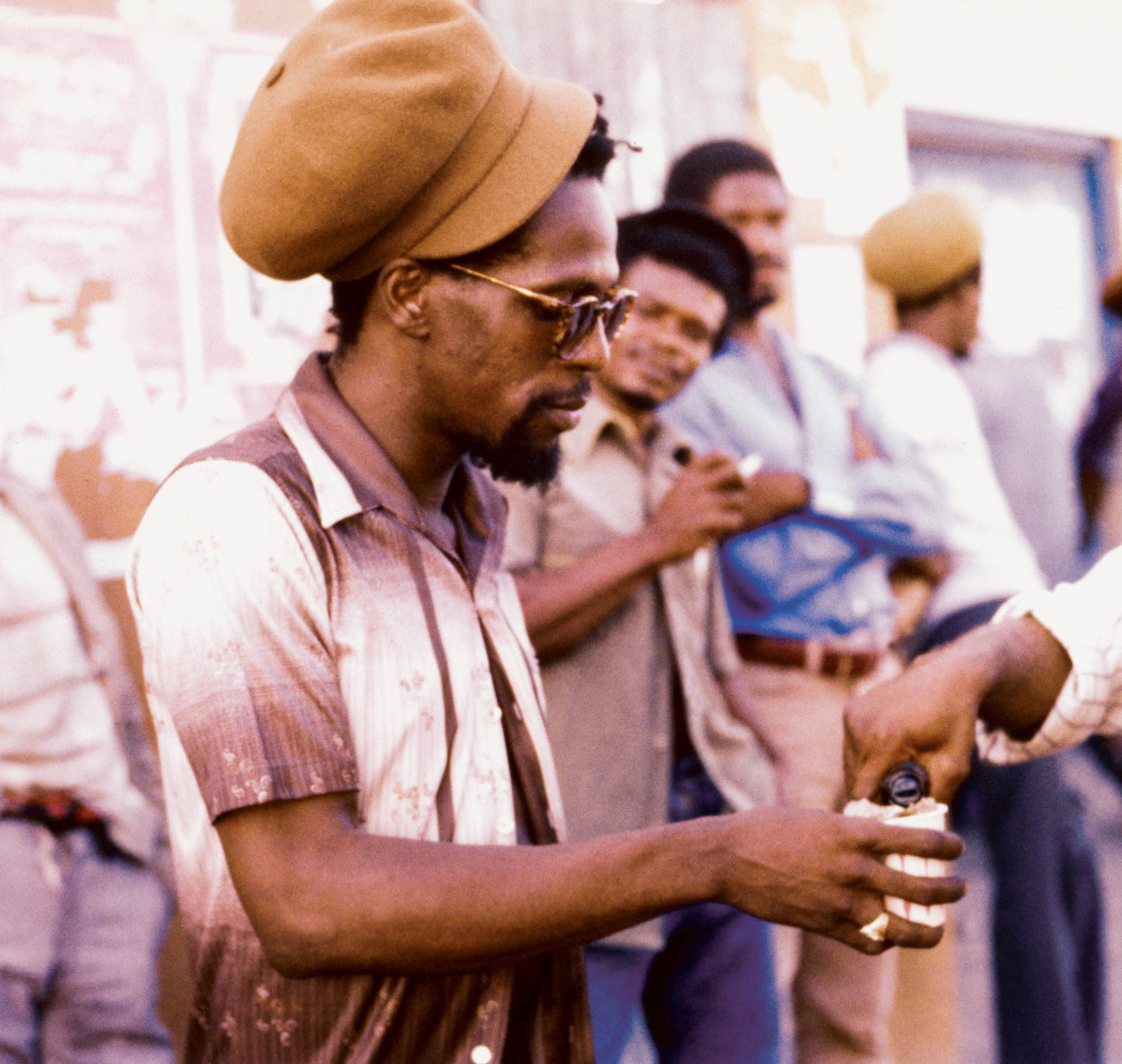 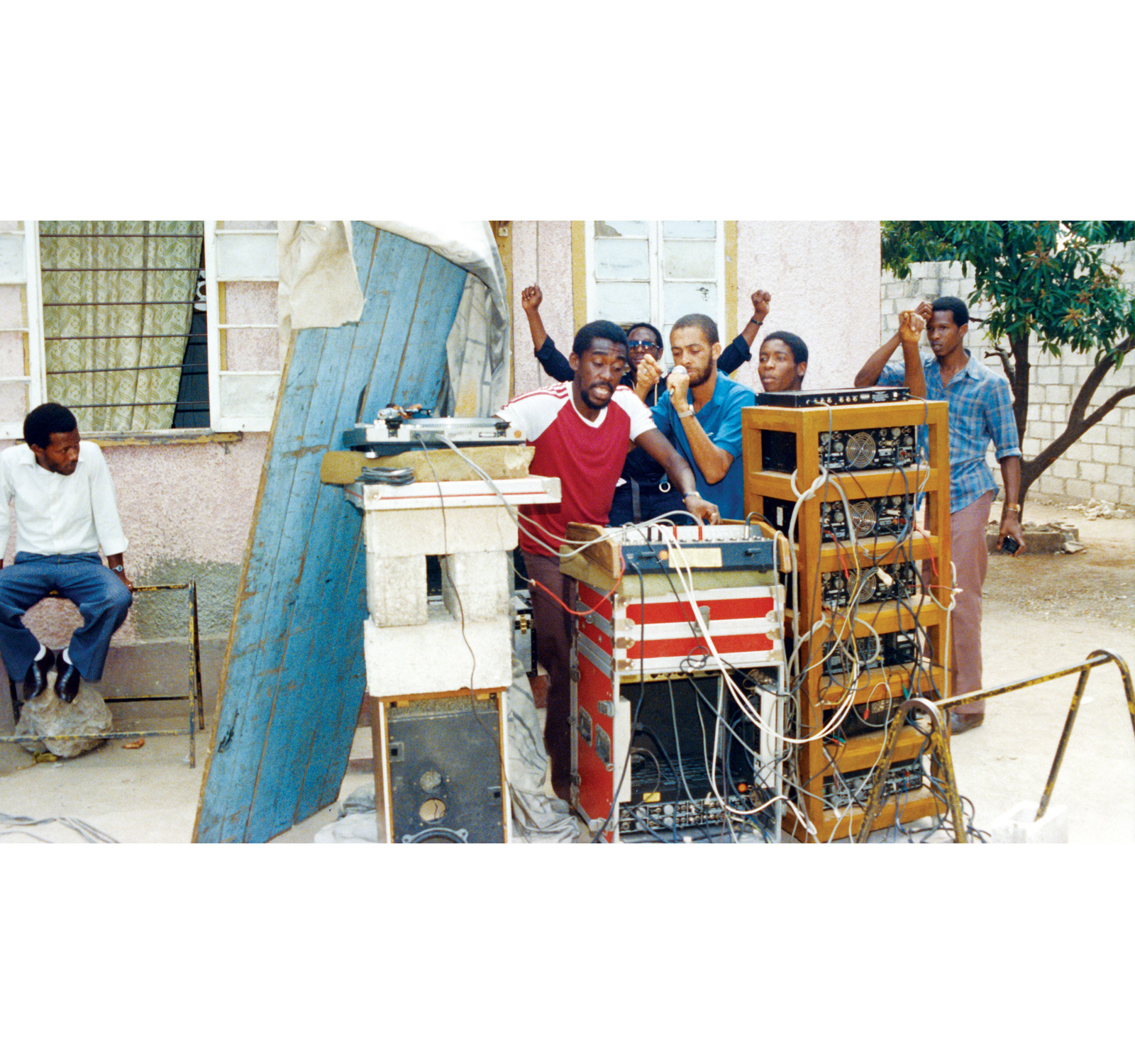 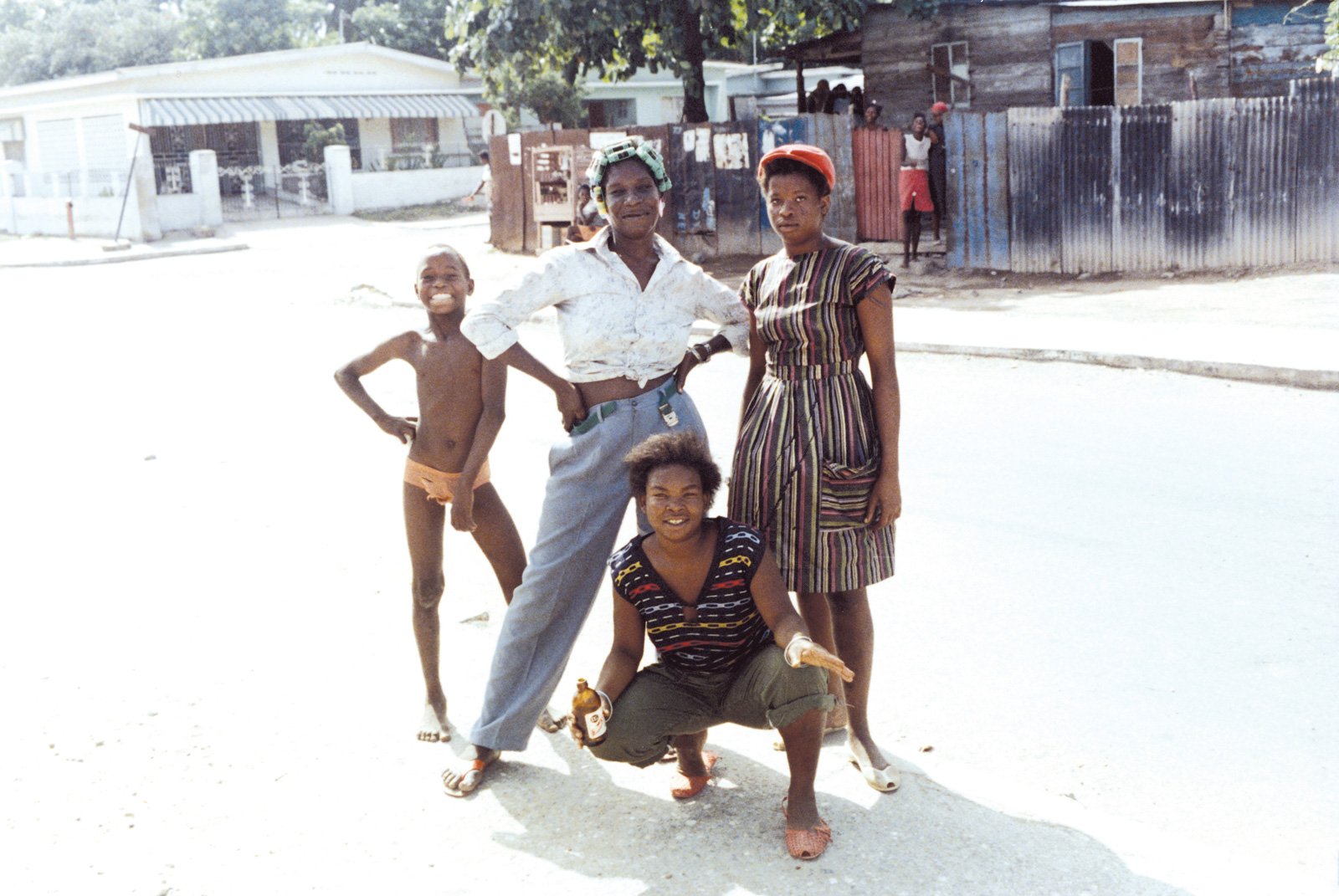 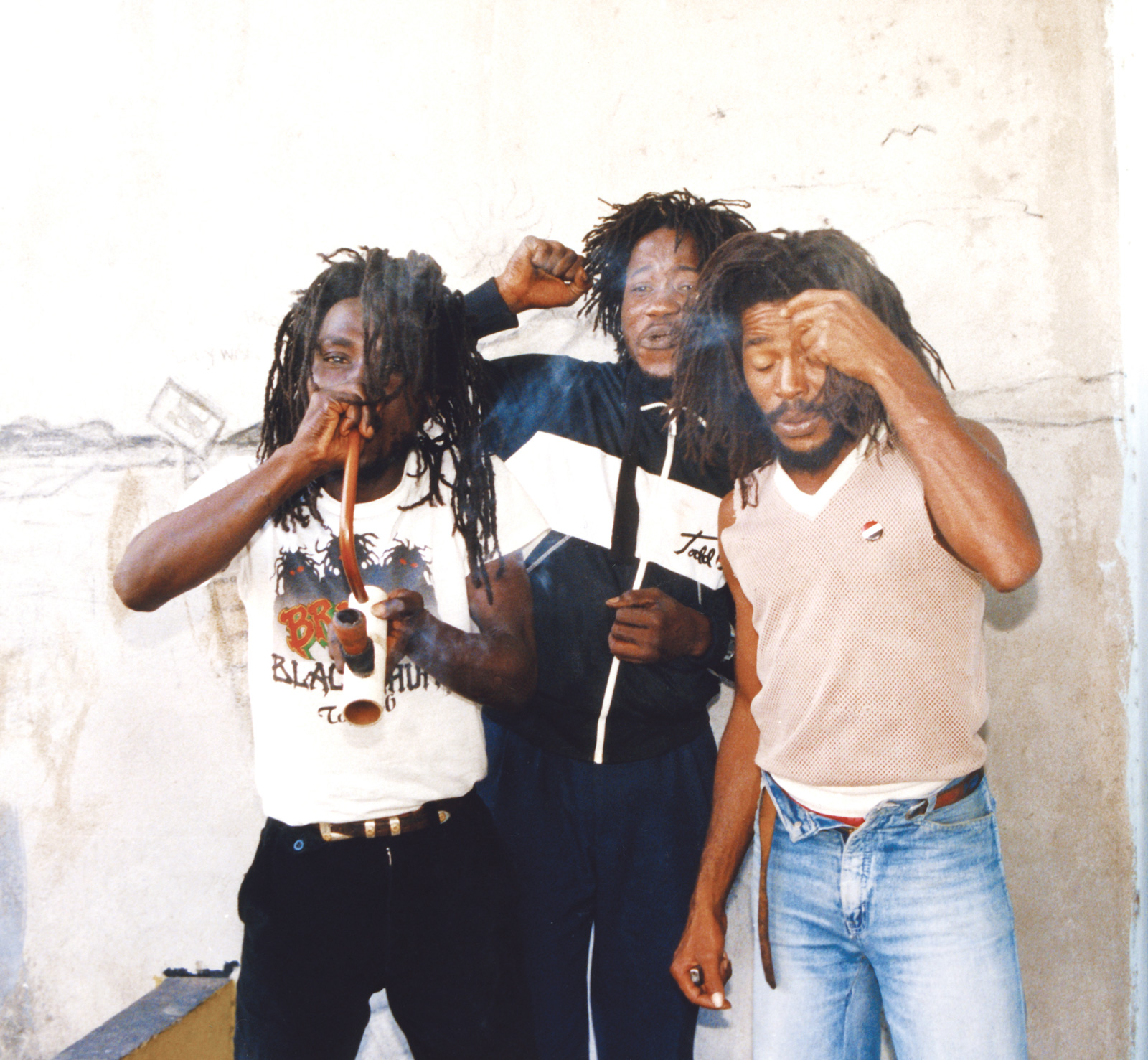 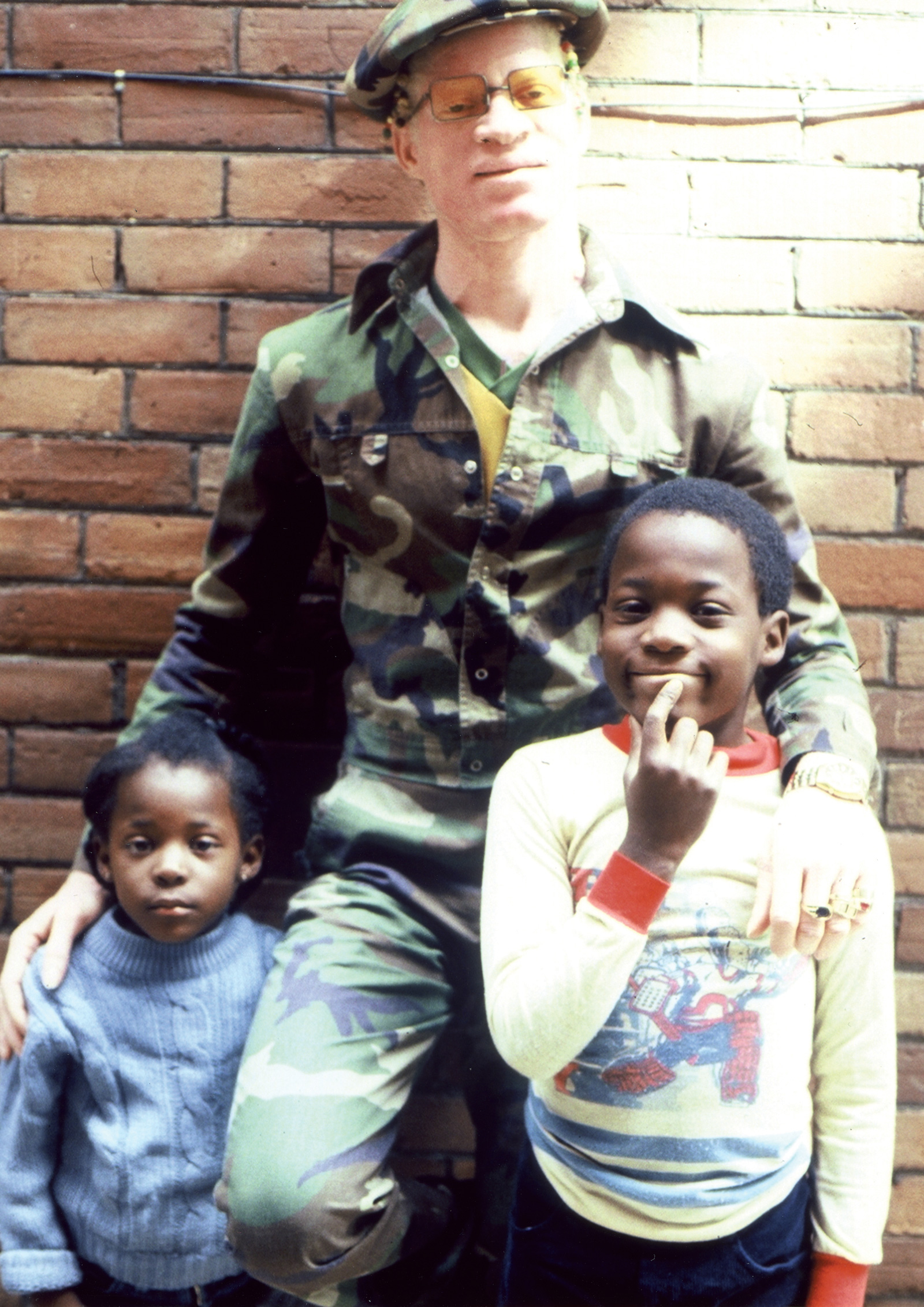 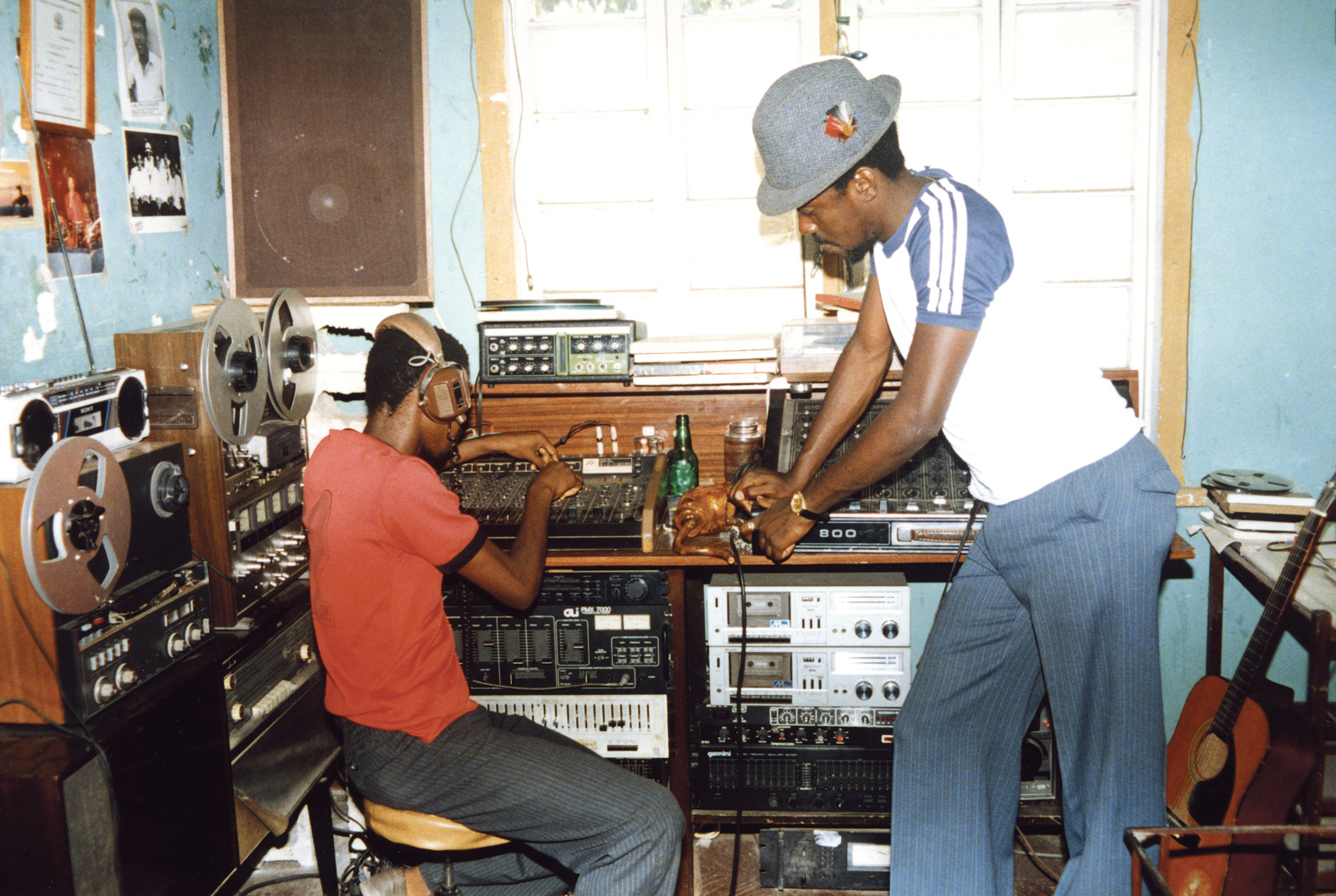 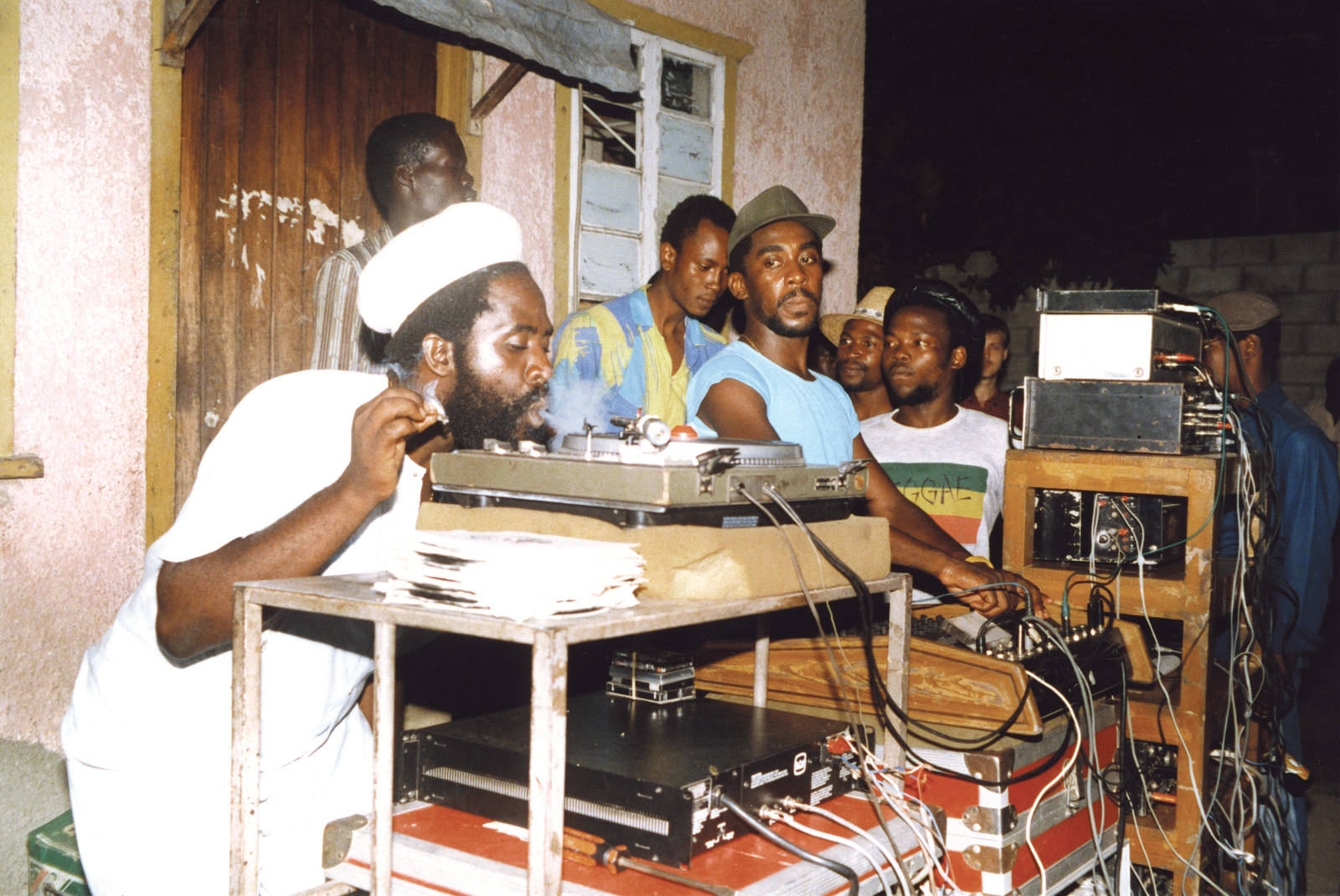 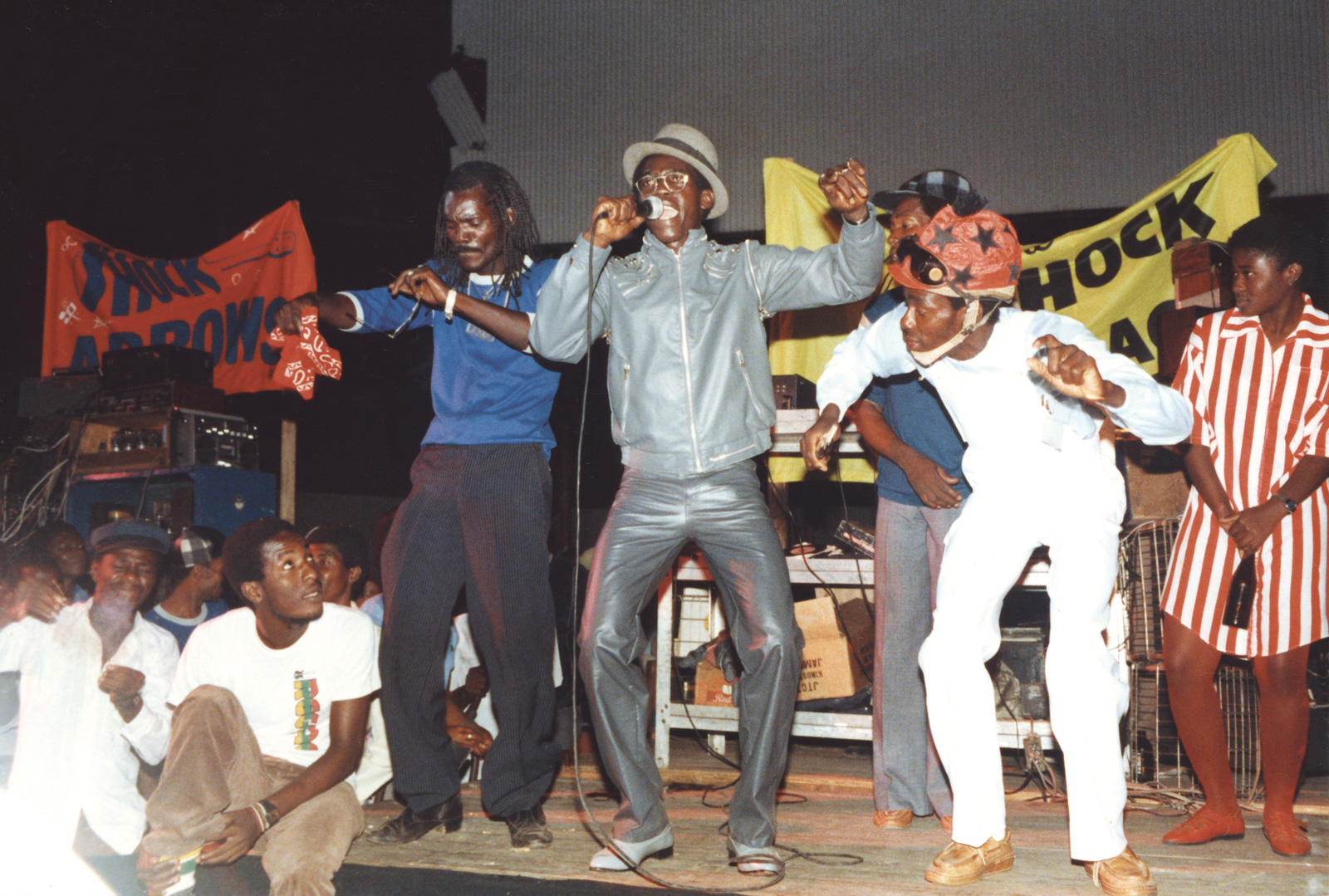 General Trees with the Black Scorpion soundsystem (or "Horseman Sound") crew at the "Shock of the Century" sound clash, Kingston, 1985

What had been mainly a live performance music developed, in the late Sixties into the Seventies, into a genre and industry in which vinyl recordings were introduced live by the selector—or MC, who was often also the DJ—who also roused the crowd with storytelling and call-and-response while changing records. (Similar practices applied in early hip hop and evolved further, with multiple turntables mixing records—most notably in the Bronx block parties of the Seventies run by the Jamaican DJ Kool Herc.) “It is not uncommon,” writes Sonjah Stanley Niaah in DanceHall: From Slave Ship to Ghetto (2010), “to hear a selector calling his crowd to respond by showing their hands to comments such as ‘from a bwoy nuh badda dan you’ (if you are the baddest), if you ‘have yu owna man’ (if you have your own man).… There is a particular ritual of interaction…[a] dynamic relationship between the patrons, the selector, the music and the dance.”

And the dance, of course, is central. It is a missed opportunity that Dancehall doesn’t focus more on the specific dances of the time—like “the butterfly,” “the pepper seed,” or “the cool and deadly.” Or later, “the Bogle,” named for the dancer who took his name from Jamaican national hero Paul Bogle, leader of the Morant Bay rebellion against colonial injustice. Just as influential as the music, styles of dance originating in Jamaica—and before that, Africa—have infused American popular dancing for decades.

The subtopics that Lesser does explore focus much more on the music, with journalistic details and personal anecdotes delving deeper into subjects like Studio One, one of the original roots-era recording studios, owned by Clement “Sir Coxsone” Dodd; Sleng Teng, one of the earliest and most recognizable computerized “riddims,” or dancehall instrumentals, over which artists record their individual songs; and Chaka Demus, the DJ and musician who, with the singer Pliers, created the classic “Murder She Wrote” (1992) for Sly and Robbie’s Taxi riddim.

From artists and producers to early fans, it was a male-dominated industry; the near total absence of women in Lesser’s photographs is striking. (And, as in Jamaican culture more generally, homophobia—undetectable in Lesser’s photos—was and is very much present in dancehall.) Women artists like Sister Nancy—whose brother, Brigadier Jerry, was a well-known DJ—stand out: her catchy, horn-heavy single “Bam Bam” (1982), used in Jay-Z’s latest album, 4:44, is one of the most sampled dancehall songs of all time. (“I’m a lady, I’m not a man,” she sings. “MC is my ambition. I come fi nice up Jamaica.”) Artists still comment on gendered inequality in dancehall music and culture, in songs like Spice’s “Like a Man” (2014) and Ishawna’s 2017 “Equal Rights and Justice,” which controversially calls for reciprocal sexual pleasure.

Besides the original confluence of dancehall and hip hop in the Seventies and Eighties—and the handfuls of crossover Jamaican hits that played in the US through the Nineties and 2000s—a new wave of Caribbean influence has recently saturated popular music. Artists like Rihanna, Nicki Minaj, and Busta Rhymes have returned to their Caribbean cultural heritage in their music, while other, non-Caribbean artists like Drake and Justin Bieber have also picked up on the trend. (Bieber’s 2015 “Sorry” and Rihanna’s 2016 “Work” were notoriously described as “tropical house,” to charges of whitewashing and cultural appropriation.)

It is the images in Lesser’s Dancehall that stay with you. Bathed in that nostalgic Kodachrome wash—somehow bright and muted at the same time—they reveal an era vibrating with new life. They also make you realize that the imagery of Jamaican music, not just the sound, has captured the global imagination for decades, since Jimmy Cliff’s yellow hat and pin-striped pants in The Harder They Come and Marley’s iconic image on the cover of Catch a Fire.

Let me play you “Arleen,” by General Echo, a seven-inch 45 on the Techniques label, produced by Winston Riley, a number one hit in Jamaica in the autumn of 1979.

Dizzy in the Daylight

Jazz Festival is a thick book of black-and-white photographs by Jim Marshall, one of the best-known American rock photographers, who first became famous by taking pictures of jazz musicians.