The portion of the Earth containing southern Louisiana has spent most of its history shifting between land and liquid. Only in the last 5,000 years has sediment from the Mississippi River lifted New Orleans out of the water, placing the city, along with the rest of southeastern Louisiana, on an alluvial “doormat” at the edge of the continental crust. Many landscape painters have crawled into low-slung caves and hiked up mountains, or waded through meadows and wheatfields, but relatively few have captured the state’s vast, changeable, young swampland.

The recent exhibition at the New Orleans Museum of Art, “Inventing Acadia: Painting and Place in Louisiana,” is the first in nearly thirty years to attempt a survey of nineteenth-century Louisiana landscape painting, and the first ever to place the tradition within wider national and international currents of art. The curator, Katie Pfhol, has done a masterful job with the resources available, but the show is somewhat cursed by the uncertainty of the land: many of the sites depicted in the paintings are today deforested, eroding, or underwater; the paintings themselves are among the few of their kind to have survived the constant humidity, as well as the floods and other disasters, that afflict the region; and even the museum itself sits in a part of the city that is still routinely inundated and was, until the second half of the nineteenth century, largely uninhabitable sludge.

Among the more than sixty paintings from American collections, there are a few anchor-pieces by relatively well-known artists, such as Théodore Rousseau and Robert Duncanson, but what stand out are the unknowns: Alfred Boisseau, Toussaint François Bigot, Richard Brammer, Marie Adrien Persac, Blanche Virginia Blanchard, and Charles Giroux, among others, artists who came to Louisiana from all over the Americas and Europe.

This presents the first of many problems for the show. These names are not only unfamiliar to most viewers, but would be obscure to veteran scholars of nineteenth-century painting. Although the “recovery” of forgotten artists and objects is typically welcome in the arts, Louisiana landscape paintings from this period are small and subtle, and they’re stuck at the crossroads of multiple zones of neglect.

For one, there is subject matter. Landscape painting has, with a few exceptions, long suffered in the so-called “hierarchy of genres.” (André Félibien, a seventeenth-century French administrator and historian, influentially ranked history painting above all, putting landscape behind portraiture and genre painting, and only ahead of still-life.) There is also the issue of American art before World War II, which is barely taught in universities and consistently struggles to beat its reputation for being European-derived. And then most decisive is the fate of the regional tradition. Louisiana has produced very few painters who achieved national or international renown, and the most famous, arguably, are: John James Audubon, who only arrived in Louisiana in his thirties, the self-taught artist Clementine Hunter, and George Rodrigue, who—after decades of painting landscapes—unveiled his “Blue Dog” to the world in the 1990s (an ill-fitting and mostly unwelcome mascot of Louisiana).

The New Orleans Museum has smartly tried to counter the accumulated neglect by adding some urgency to the exhibition. The marble-clad entrance hall is currently lined with a one-hundred-foot panorama by the contemporary artist Regina Agu, showing ghostly views of Louisiana’s waterways. Agu photographed a number of the sites depicted in the nineteenth-century paintings and then distilled the images into sweeping composites, in which bayous and swamp reeds and oil refineries melt into one another and fade out like fog. As the local environmental emergency continues to unfold—sinking soil, rising seas, harsher storms, and disappearing wetlands—Agu’s installation speaks in a warning future-perfect tense: this is what will have been Louisiana.

In the galleries, the show begins with two of the earliest Louisiana landscape painters, Toussaint François Bigot and Richard Brammer, who made their way to New Orleans, from France and Ireland respectively, in the first half of the nineteenth century. Bigot’s Alchapalia, Louisiana (1848) is one of the exhibition’s highlights. It shows the intersection of five waterways deep in the Atchafalaya Basin, which is still North America’s largest river swamp. In the foreground, the land is split into two lobes: a group of indigenous people gather near a fire on one, and on the other, an alligator watches as a wildcat rips through a snake. Farther back, there are bald cypress trees, root systems knuckling their way out of the mud, and rowboats passing through the bayou. 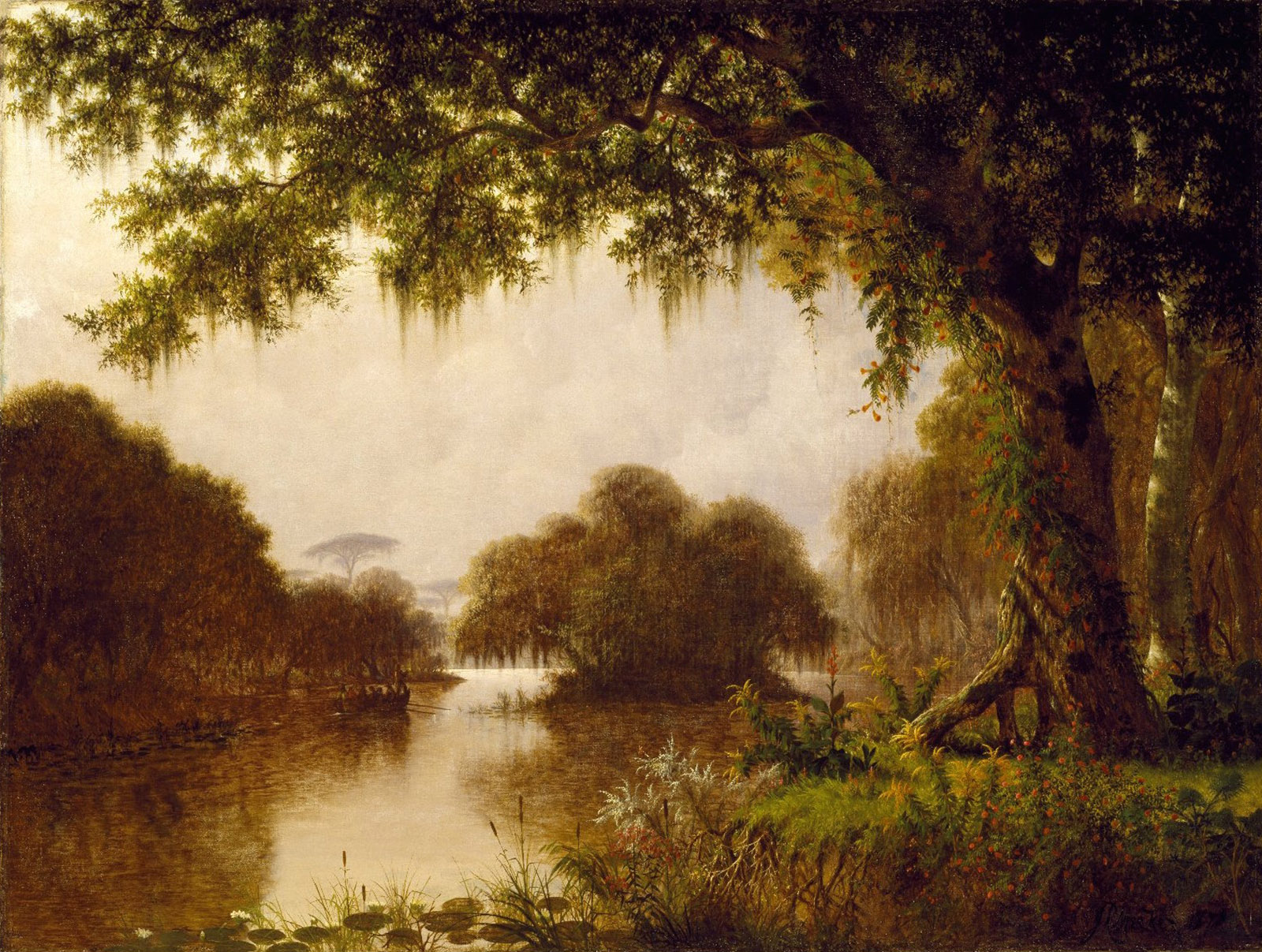 Joseph Rusling Meeker, The Acadians in the Atchafalaya, “Evangeline,” 1871 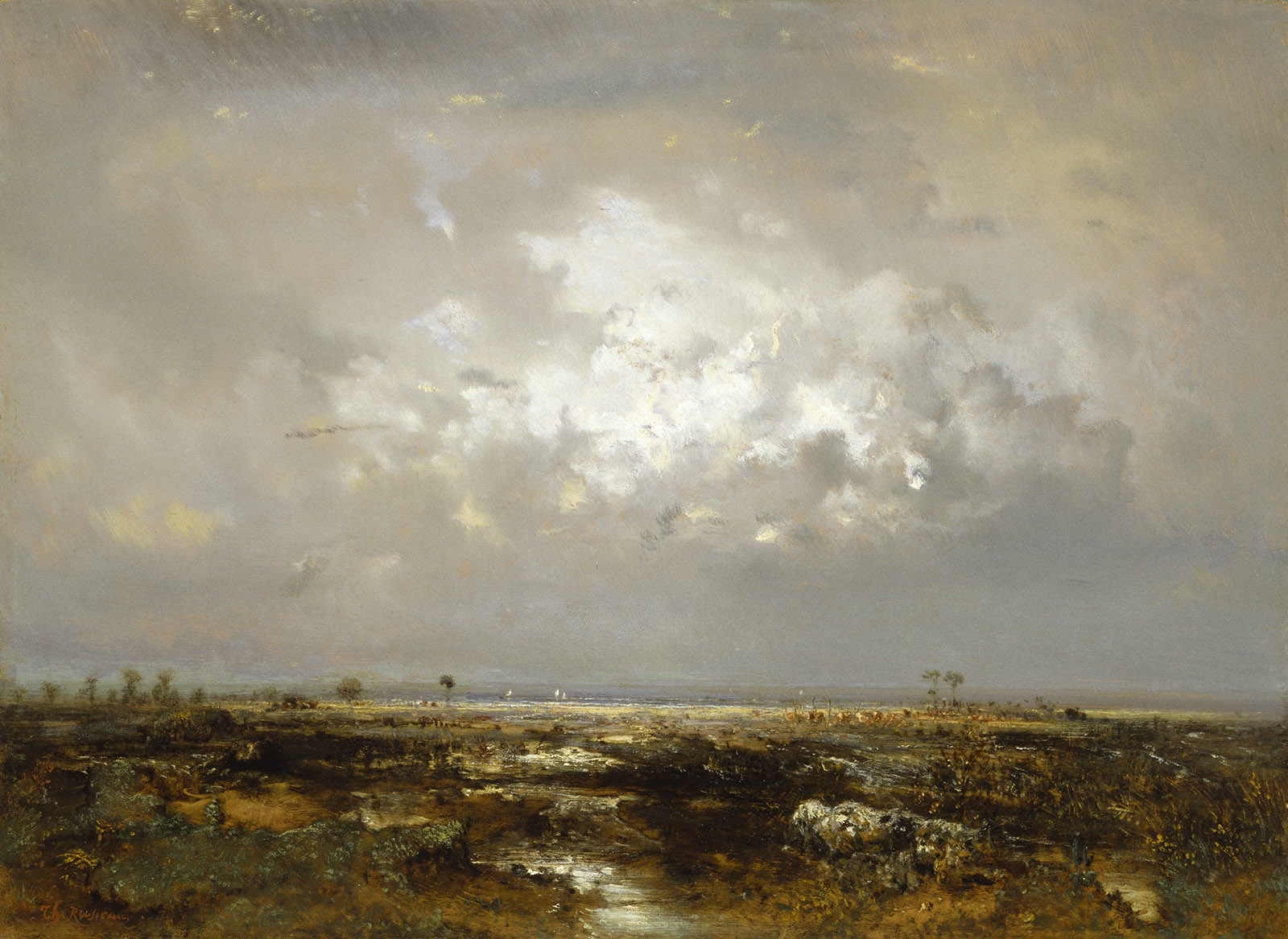 Théodore Rousseau, A Swamp in the Landes, after 1844 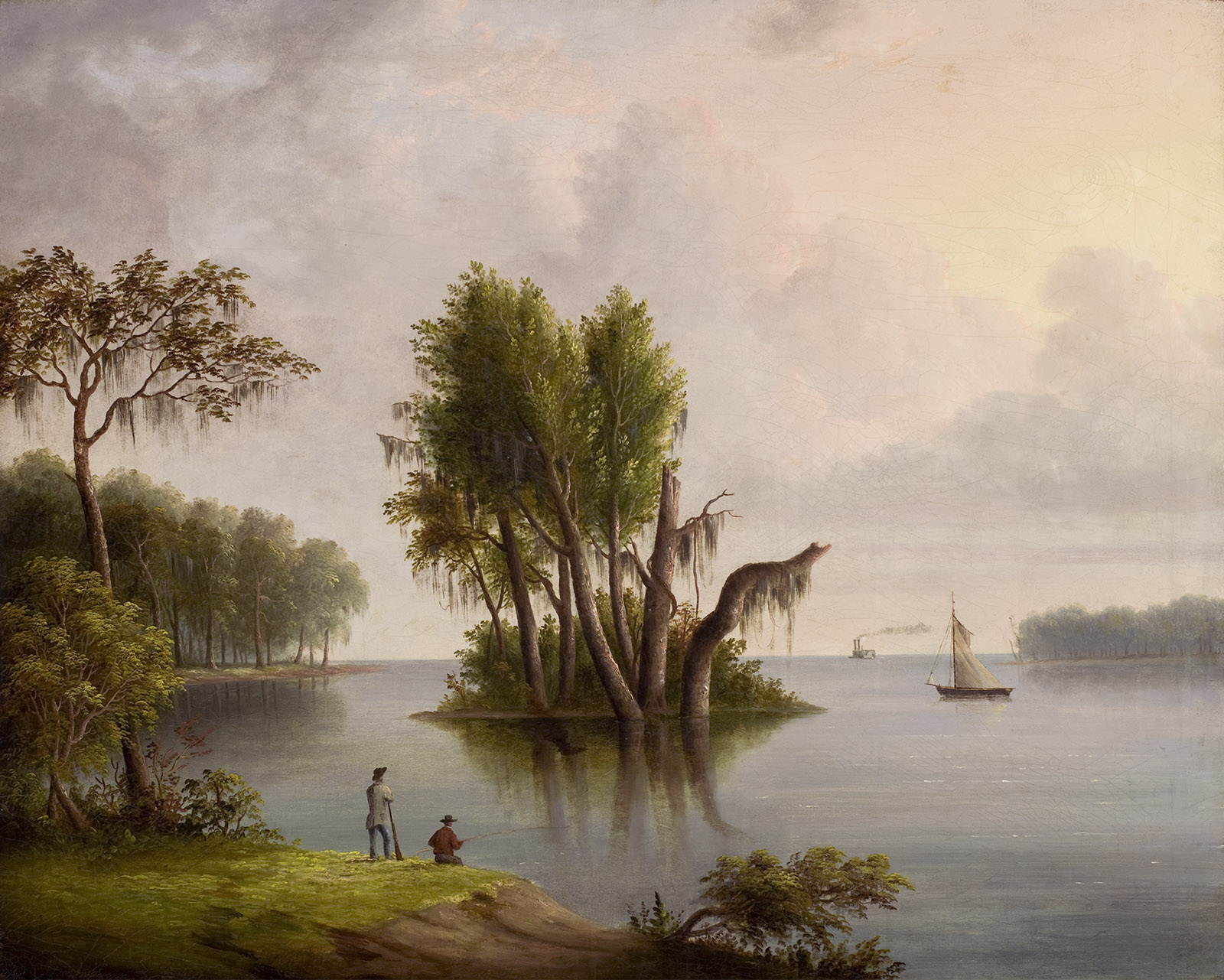 What stands out in Bigot’s work is that the water is not rendered as a brown-green slurry; it is limpid and pale, like a clean sheet of ice. Bigot, Brammer, and another contemporary, Marie Adrien Persac, who painted muddy plantations with perfect picket fences and rectilinear cabbage patches, all tended to use thin brushwork and muted colors that make entire swamps and floodplains look glassy and brittle. The land isn’t hot and diseased; nor does it bear the traces of chattel slavery or the displacement of indigenous people. Instead, it’s as if the congenial cool-blue weather of some vaguely Northern clime has descended onto the marshes, cypress knees, and Spanish moss. The style suggests how conflicted the desires of settlers were: to tame the land, to make it inviting and profitable; and, at once, to luxuriate in the undomesticated wild.

While Bigot and Brammer were working in New Orleans, the dominant landscape tradition in the US was the Hudson River School, exceedingly popular in the mid-nineteenth century. The Knickerbocker magazine reported in 1853 that “landscape-painting has acquired in our country a dignity and character… which cannot be claimed by any other branch of the fine arts.” This not only breaks the landscape-as-neglected-genre rule but shatters it to the point that “Hudson River School” has become synonymous with American landscape painting as such, effectively smothering the various regional traditions.

As early as the 1840s, Louisiana landscape painters were already under the influence of Hudson River artists such as Thomas Cole and Asher B. Durand—whose works had made their way into New Orleans collections—but what’s notable is how local painters developed a vernacular of their own. There was no room for swampland in the existing Hudson River mold: its contrasting “picturesque” and “sublime” modes; the quiet shorelines of John F. Kensett, and the booming, symbolic vistas of Albert Bierstadt; the patriotic fever for New England’s past, incarnate in the Catskills, and the allure of the nation’s future out West in Yosemite and Yellowstone. Louisiana was not monumental, and it was barely seen as American (considering its ties to Latin America and France). And God was not waiting for artists among tupelo gum trees or brackish marsh or duckweed. 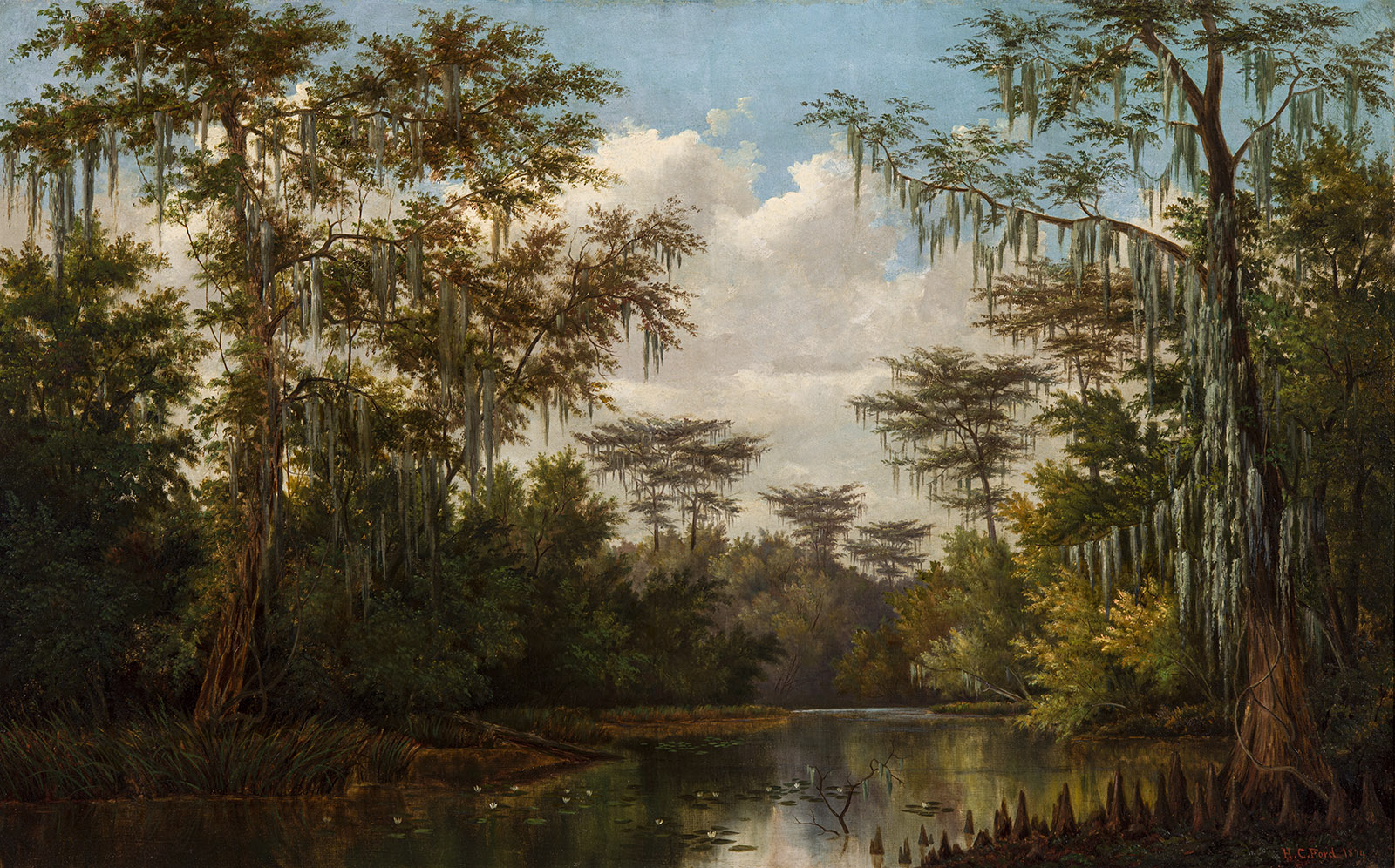 Collection of Fred and Jennifer Hebee/NOMA 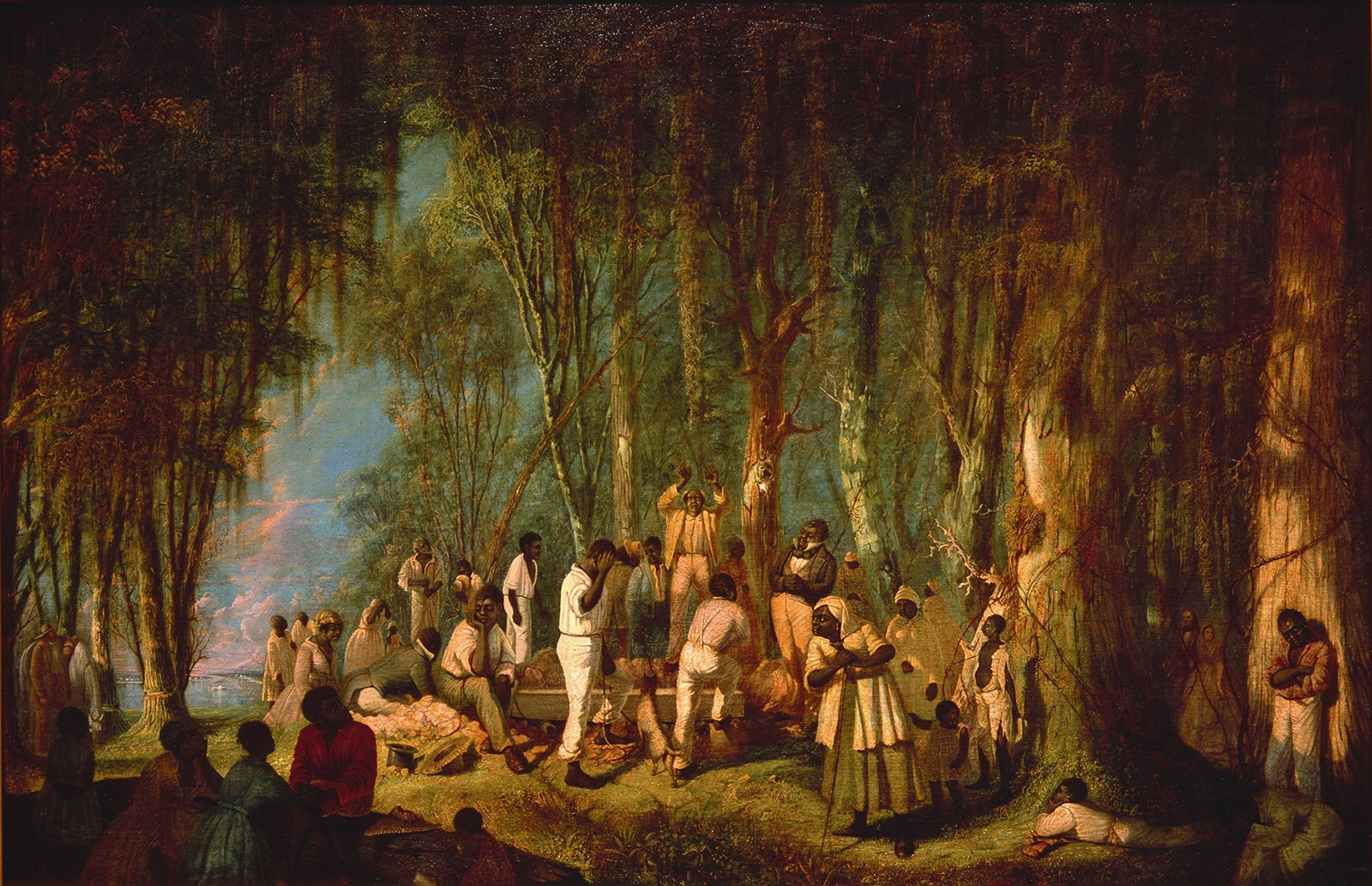 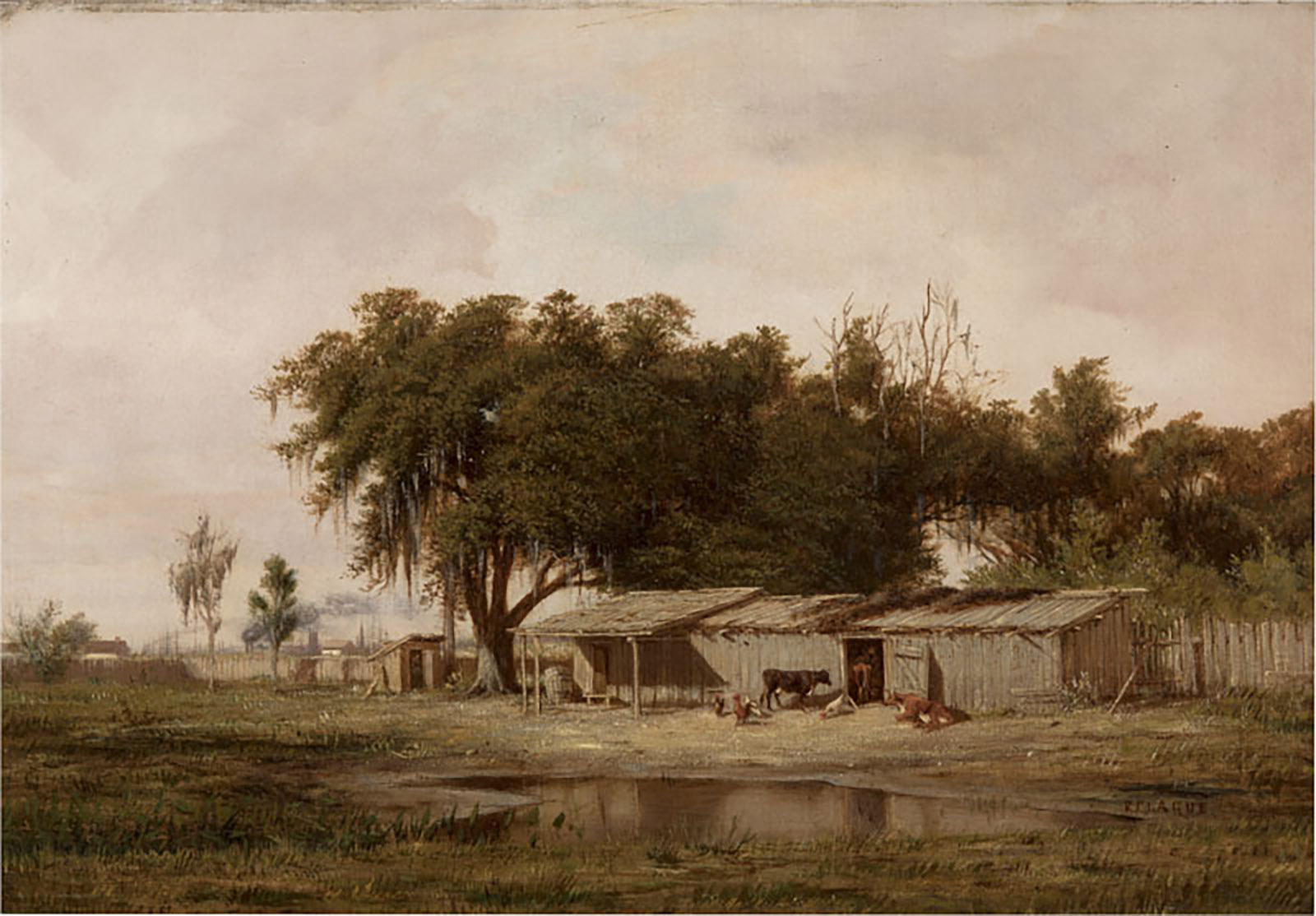 A new generation of painters in the decades following the 1850s responded more immediately to the mood and flora of Louisiana’s wetlands. There were, roughly, two strains: one Naturalist and the other Romantic. The leading Naturalist was Richard Clague, a Frenchman who attended the École des Beaux-Arts in Paris and became a legatee of the Barbizon School (which included French artists such as Théodore Rousseau and Charles-François Daubigny, who painted landscapes with an unsentimental eye beginning in the 1830s). In Louisiana, Clague was confronted with difficult, low-lying marshland, and he responded with spare compositions and rough-hewn brushwork. In pieces such as Fisherman’s Camp (undated) and Back of Algiers (circa 1870–1873), Clague paints open skies and floodplains, evenly lit and interrupted mostly by trapper’s cabins and rickety shacks.

The Romantic counterpart to Clague was Joseph Meeker, an American who studied at the National Academy of Design—a Hudson River School hotspot in New York. During the Civil War, Meeker served as a paymaster on a US Navy gunboat in Louisiana and sketched the swamps in his spare time. Many of his paintings show lonely waterways bowered by thick walls of cypress. The trees are dark, almost silhouetted, and set off against bright skies that occasionally look juice-filled—red or lemon-colored.

In The Land of Evangeline (1874), a painting based on Henry Wadsworth Longfellow’s epic poem “Evangeline, A Tale of Acadie” (1847), a canoe has run aground in a quiet swamp grove. A woman, Evangeline, looking for her lost lover Gabriel, rests under a canopy on a bed of earth barely larger than her body. The faded leaves are mint-green and soothing, and the water is calm. But in a swamp, everything crawls and ribbits and drips; there is mystery, menace even. The light dies sharply in the painting as if a drain were installed in the back of the composition—color being sucked from the foreground until it turns gray and dead—and Spanish moss hangs from the branches, fretting the edge of clean lines, like contrails or smeared ash. As with much of Meeker’s work, the painting flickers, lost somewhere between the picturesque and the sublime: it is restful and worried, restrained and haunted.

“Inventing Acadia” underscores that nineteenth-century landscape artists in Louisiana were remarkable not just for what they painted, the charm and novelty of their views, but for what they often chose to exclude. Women, the enslaved, and the indigenous are largely invisible in the landscapes as the century wore on, and even though the Civil War, Reconstruction, and racial terror can be read into a wrecked skiff, a splintering cypress tree, or the dusk, they are ultimately absent. It leaves a sense of melancholy hanging over the show. The wounds of history are festering at the edge of every canvas, and the future of the land is being gradually erased from within.

“Inventing Acadia: Painting and Place in Louisiana” was at the New Orleans Museum of Art from November 16, 2019, through January 26, 2020.

Zachary Fine is a freelance writer from New Orleans who has contributed to Artforum, Art in America, the Financial Times, The New Republic, and the Times Literary Supplement. (February 2020)

Local interpretations of the original Hollywood VHS sleeves, or representations of scenes from the movies embedded with local symbolism, ushered in a genre of “Africanized” Hollywood aesthetics.

Avnet’s film, for all its blustering about the institutional period of mental health treatment, is on its firmest footing when in its depiction it strives for accuracy about the ache and woe of mental illness, when it says what is true: that they are us.

When I asked Merce Cunningham in the mid-1990s for feedback on near-final galleys of a book about him that I was editing for Aperture, Cunningham’s only response was: “Do there have to be so many pictures of me?”