The radiation-green cover of FloodZone, a new collection of photographs by Anastasia Samoylova, is half-filled by the belly of a swimming alligator, its suspended claws both graceful and menacing. The shape is recognizable but still novel for any Floridian, more likely to have seen gators from above. In another image, a manatee’s curved form embodies a dark, winding topography.

FloodZone evokes not so much the tension between Miami’s ecological precariousness and its irrepressible beauty as their intertwined unity. Upon her arrival to the city from Great Barrington, Massachusetts, nearly four years ago, Samoylova was struck by the fauna, how it crept into urban areas—an egret on a crosswalk, an octopus in a garage. “It reminded me of J.G. Ballard’s Drowned World,” she told me at her studio, as sun-starched as her images. “I questioned whether humans were ever meant to really inhabit this place.”

South Florida’s environmental history—of dredging and draining, the local ecology ever more endangered by development and greed—is not unique, although the landscape manifests the havoc with a particular urgency. Miami is sinking—or, the water is rising. The sea level around Virginia Key, a local barrier island, rises an inch every three years; Florida’s bedrock is porous limestone, which allows saltwater to flood the state from below. You see the damage in the sunny-day floods of high tides; in the ceaseless street-lifting construction; in the quickening gentrification of residential neighborhoods on higher ground, with the attendant displacement of older communities.

Samoylova was first seduced by Miami’s light and amused by its veneer—a city deeply invested in its own image. Advertisements for luxury high-rises show shiny images of pools and attractive couples, presumably oblivious of what’s to come. Samoylova knows something about artifice; as an architecture and interior design student in Moscow—her discipline was officially titled Eco-Art Design— she noticed that photographs of her own designs never quite captured their depth or complexity, rendering her work, she said, “in a completely different scale. Photography creates a separate reality.”

She moved to the US to pursue a degree in that medium instead; in 2013, she began her ongoing “Landscape Sublime” series, for which she collects and reprints the repetitive photographs of popular natural phenomena—what she calls “tropes in landscape photography, like waves crashing and rainbows”— available in the public domain, arranging them into staggering abstract collages. “Miami,” she realized, “was a life-sized collage of images.” 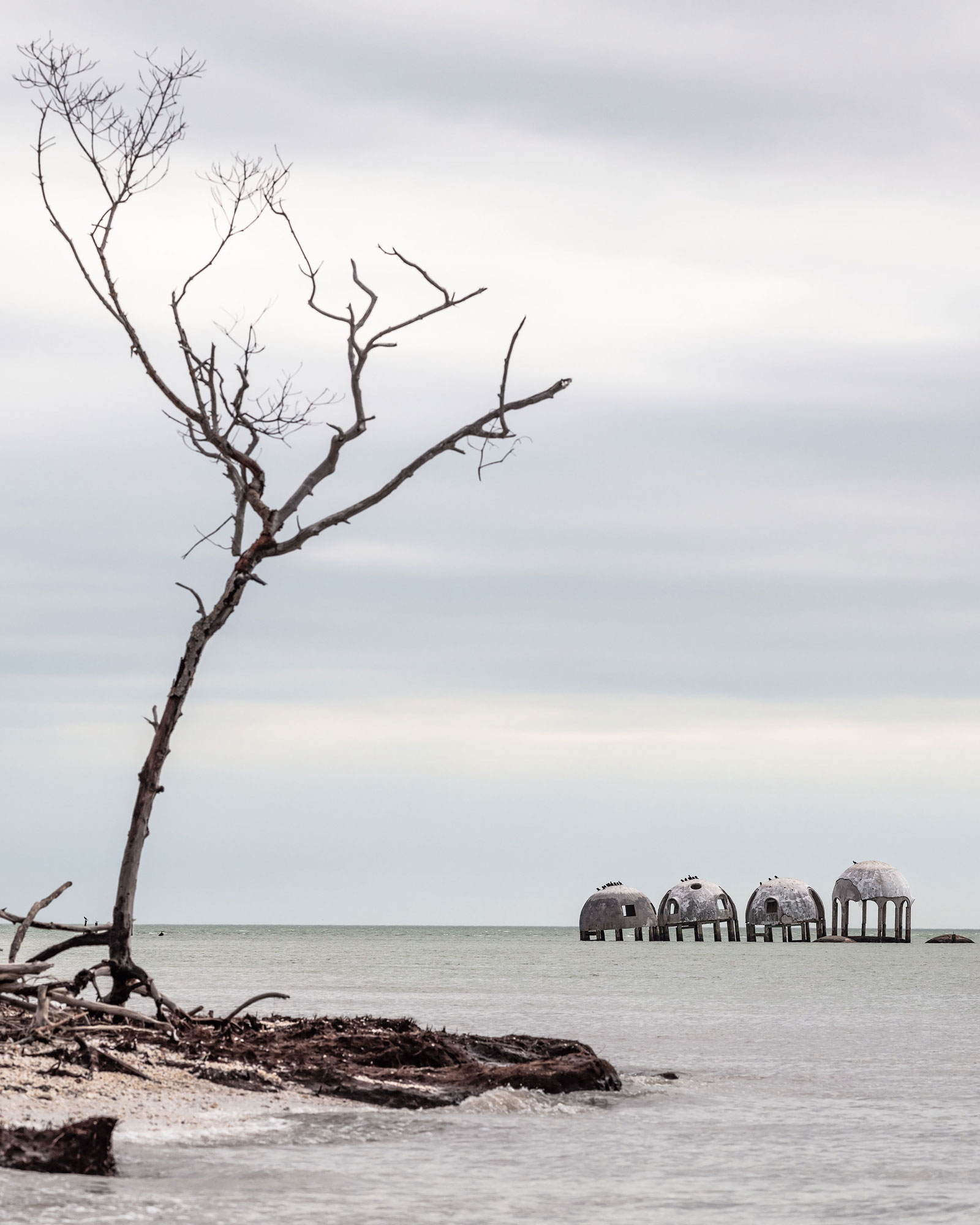 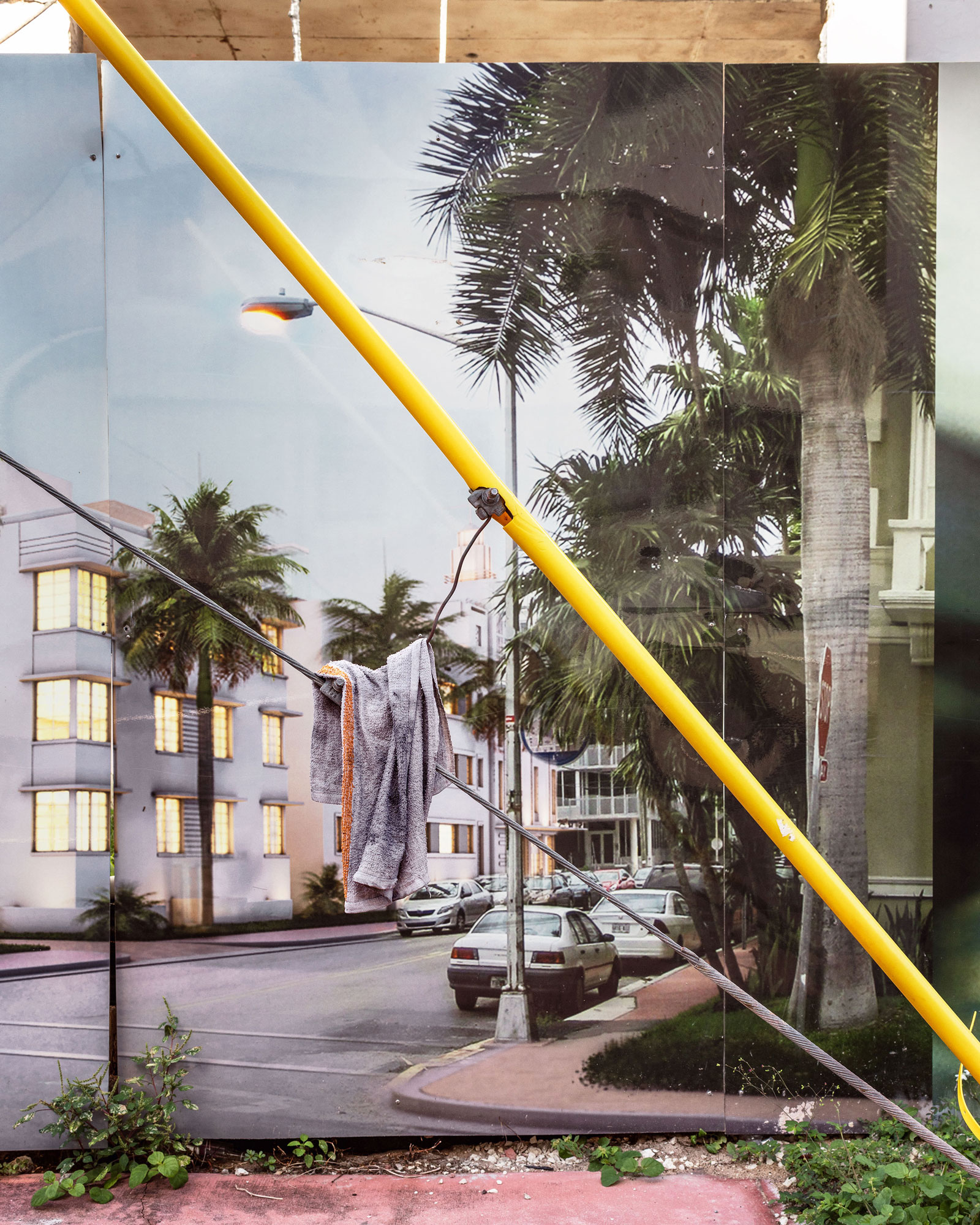 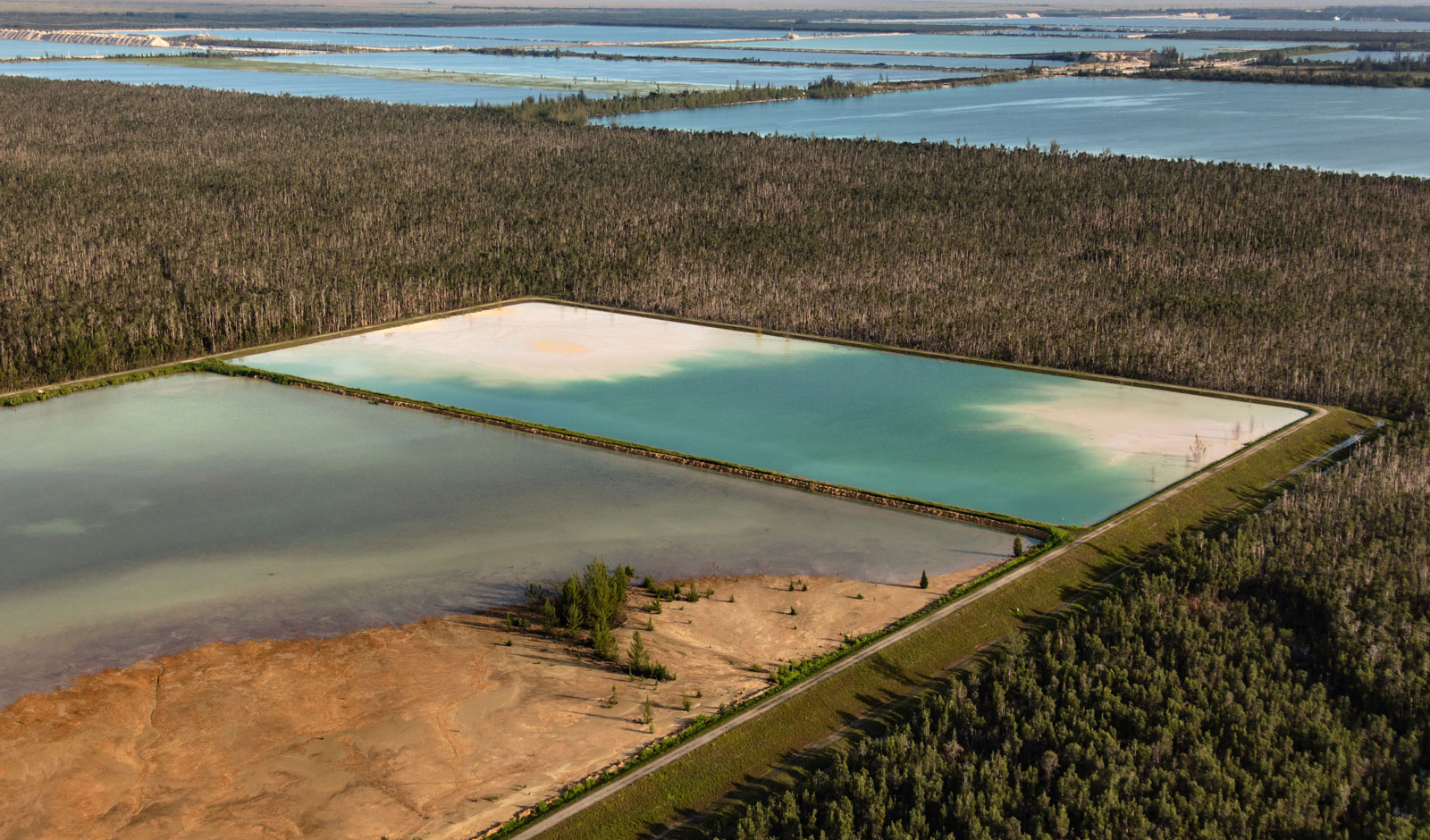 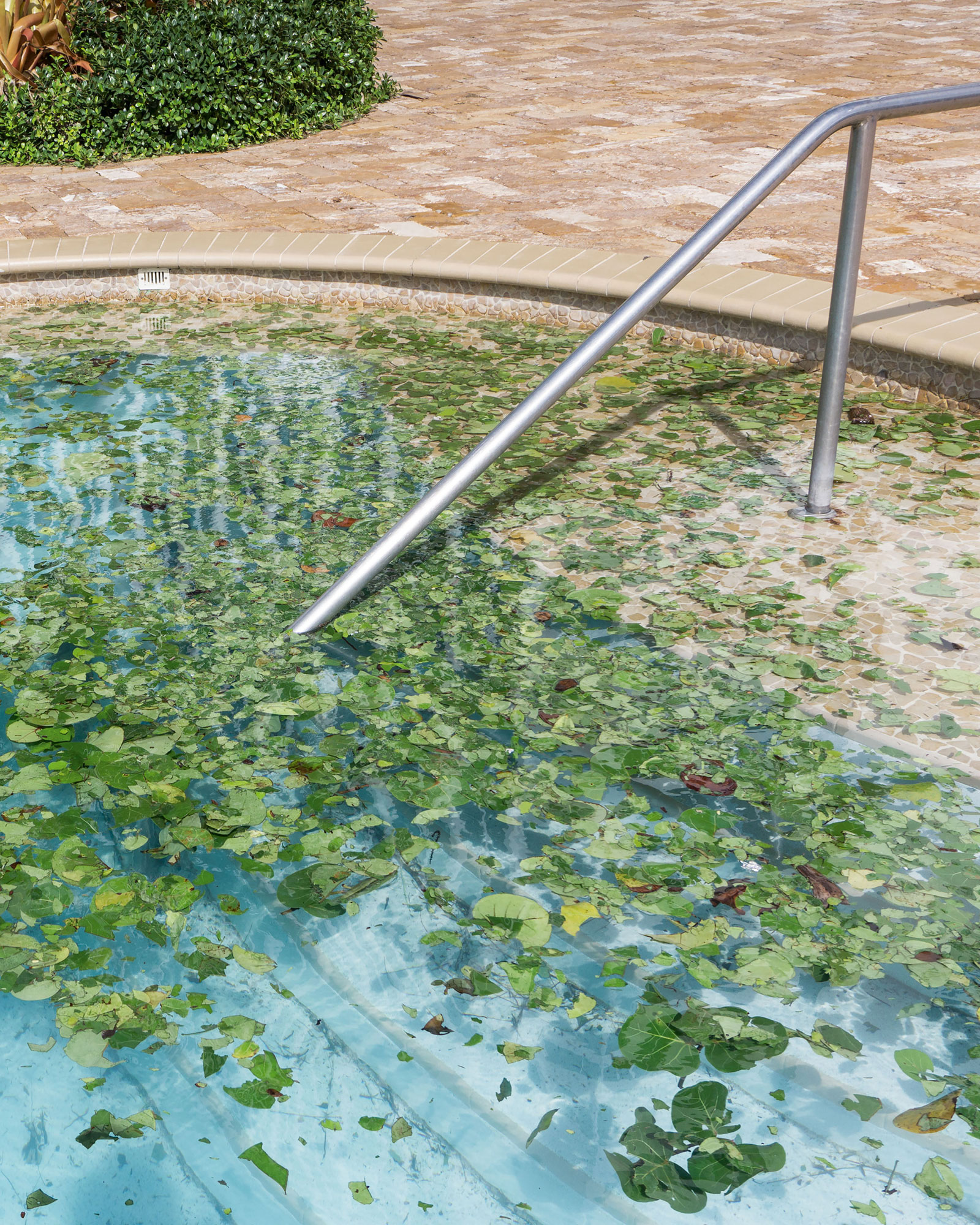 FloodZone lays Miami’s underlying fractures bare: street-level billboard renderings of new apartments are fenced off by rain-weathered chain-link and sidewalks fractured by flooding. Water is everywhere—Samoylova’s images show road and sky collapsing into one gray, reflective surface. In Miami’s Little Haiti district, a mustard-yellow mural is weathered by humidity; on Virginia Key, a boat seems transformed into a living thing, verdant with barnacles. In another photo, two women lean on each other, hair afloat with sea breeze. Though FloodZone largely highlights street scenes, there are people, too—most of them seemingly unconscious of Samoylova’s lens, though in fact she spoke to many of them.

“I’m shooting a project called FloodZone,” she told a man gardening in Little Haiti, encircled by bougainvillea. “I’ve got a flood story for you,” he replied, as did nearly everyone, she told me. In FloodZone, the ongoing destruction isn’t explicitly documented, only portended through signs of the porousness between our man-made world and the natural one surrounding it. It is always the calm before or after the storm: a child wading through a flooded garage, a bird stoically surveying an unusually high tide, the constant, always visible construction of condos for the wealthy—as familiar now in the city’s landscape as the water itself.

And the images are unabashedly gorgeous—which comes with a risk, Samoylova knows, of aestheticizing the climate change that is her subject. We’ve watched shorelines erode, seen the coral reefs bleach themselves white, felt the heat stretch summer into fall. In David Campany’s catalog essay “Coming Waters,” he asks, “What is it to live day by day on a climatic knife-edge?” FloodZone’s most incongruous scenes, like the roosters seen against the background of a Zaha Hadid skyscraper, make me giddy with pleasure. 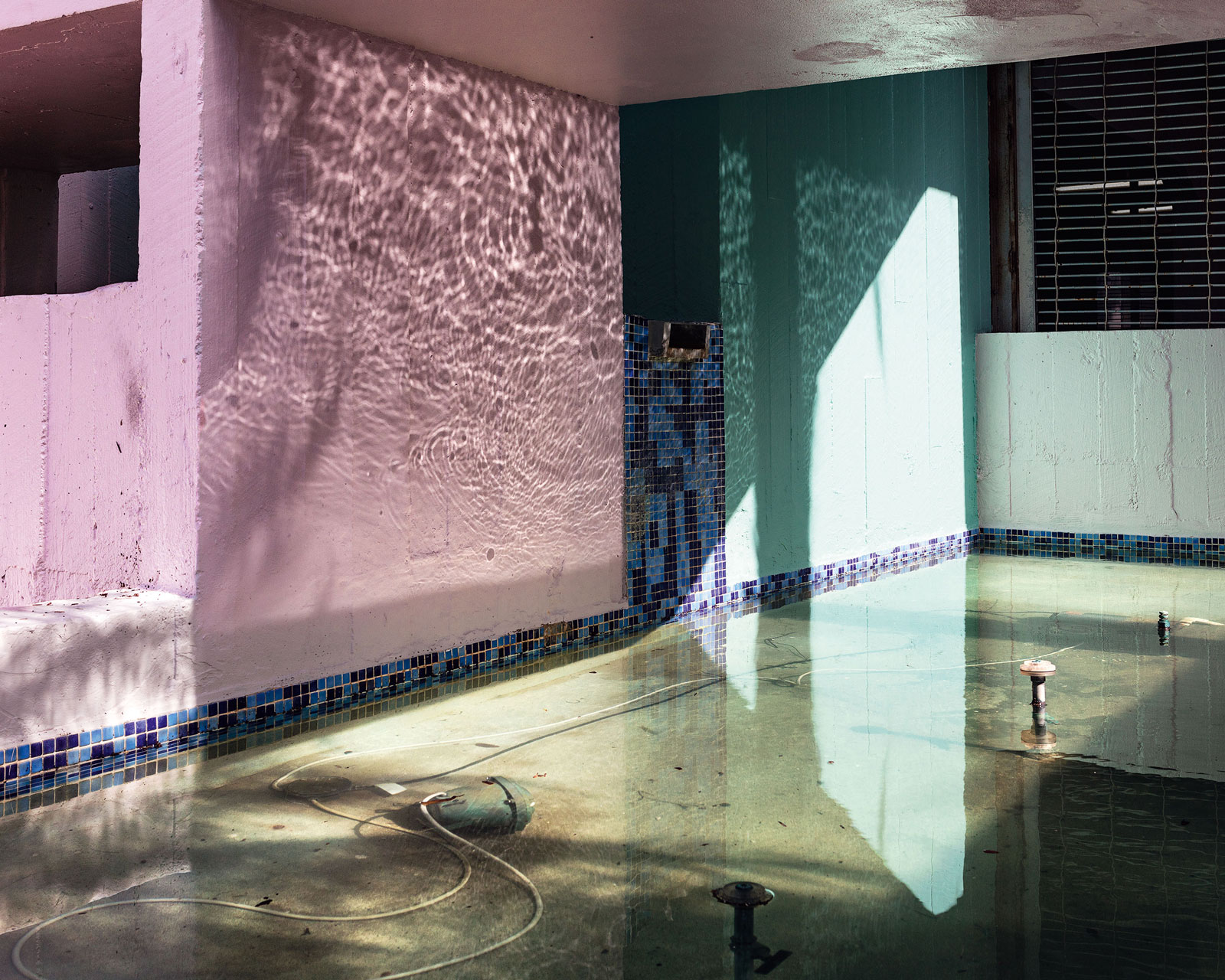 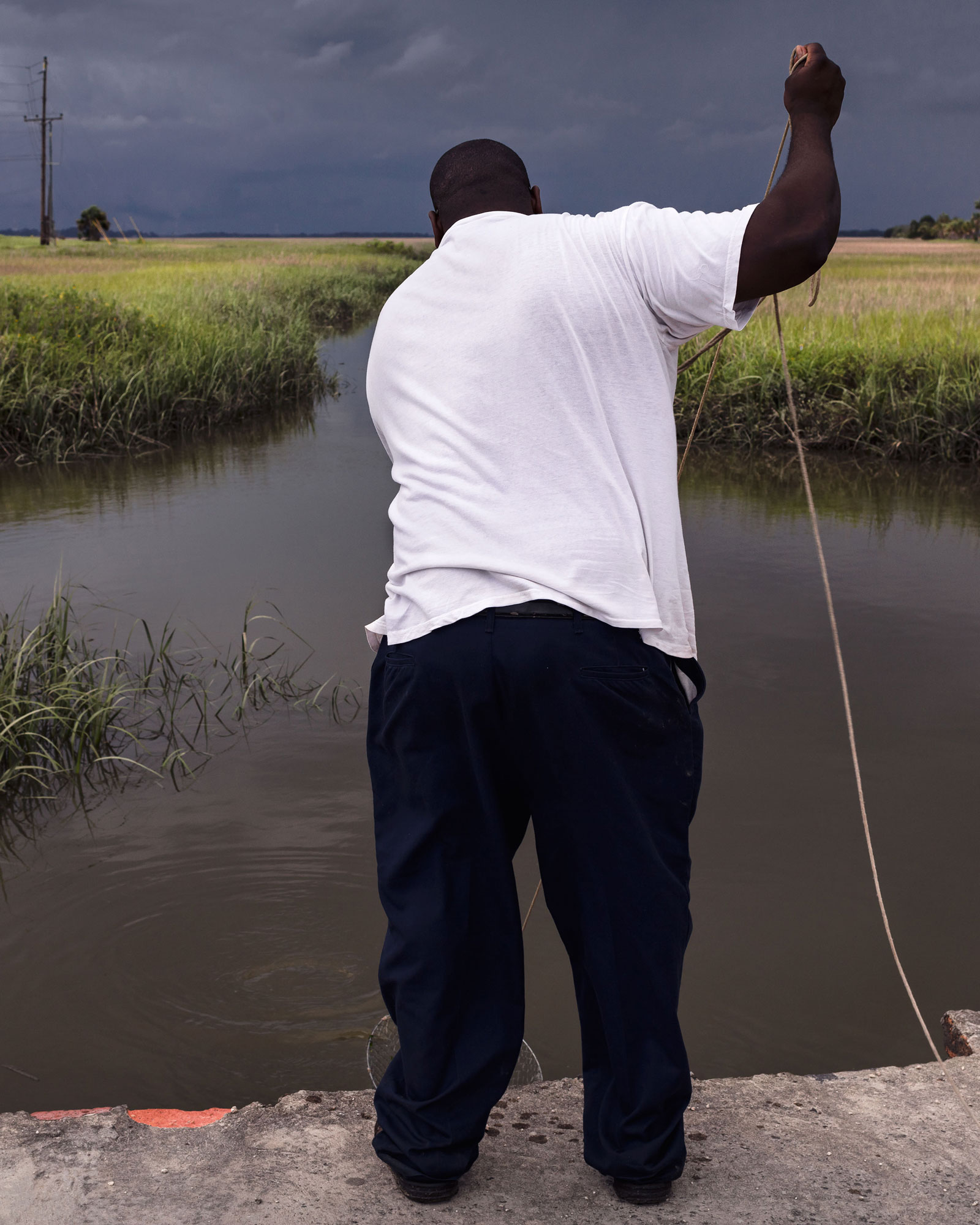 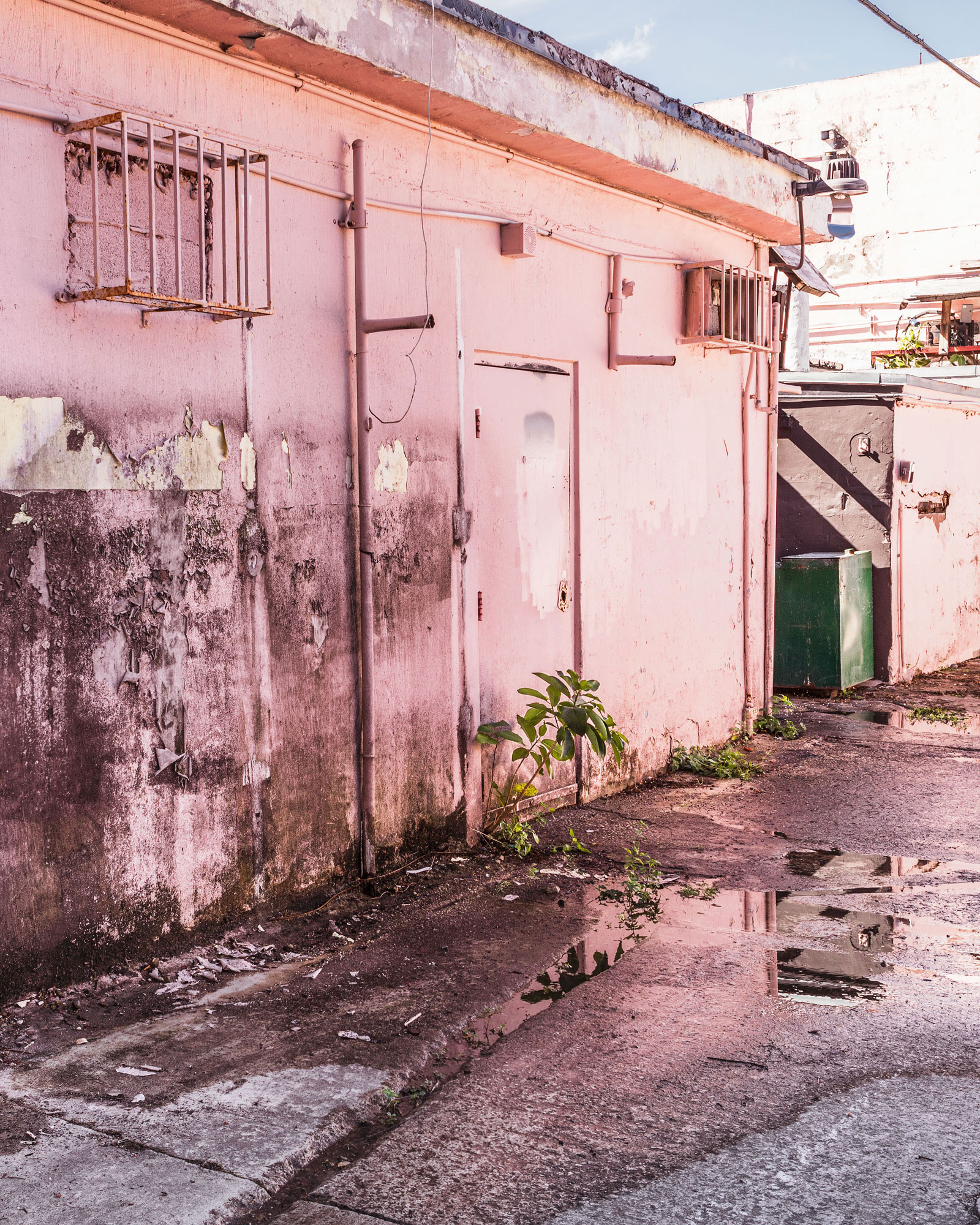 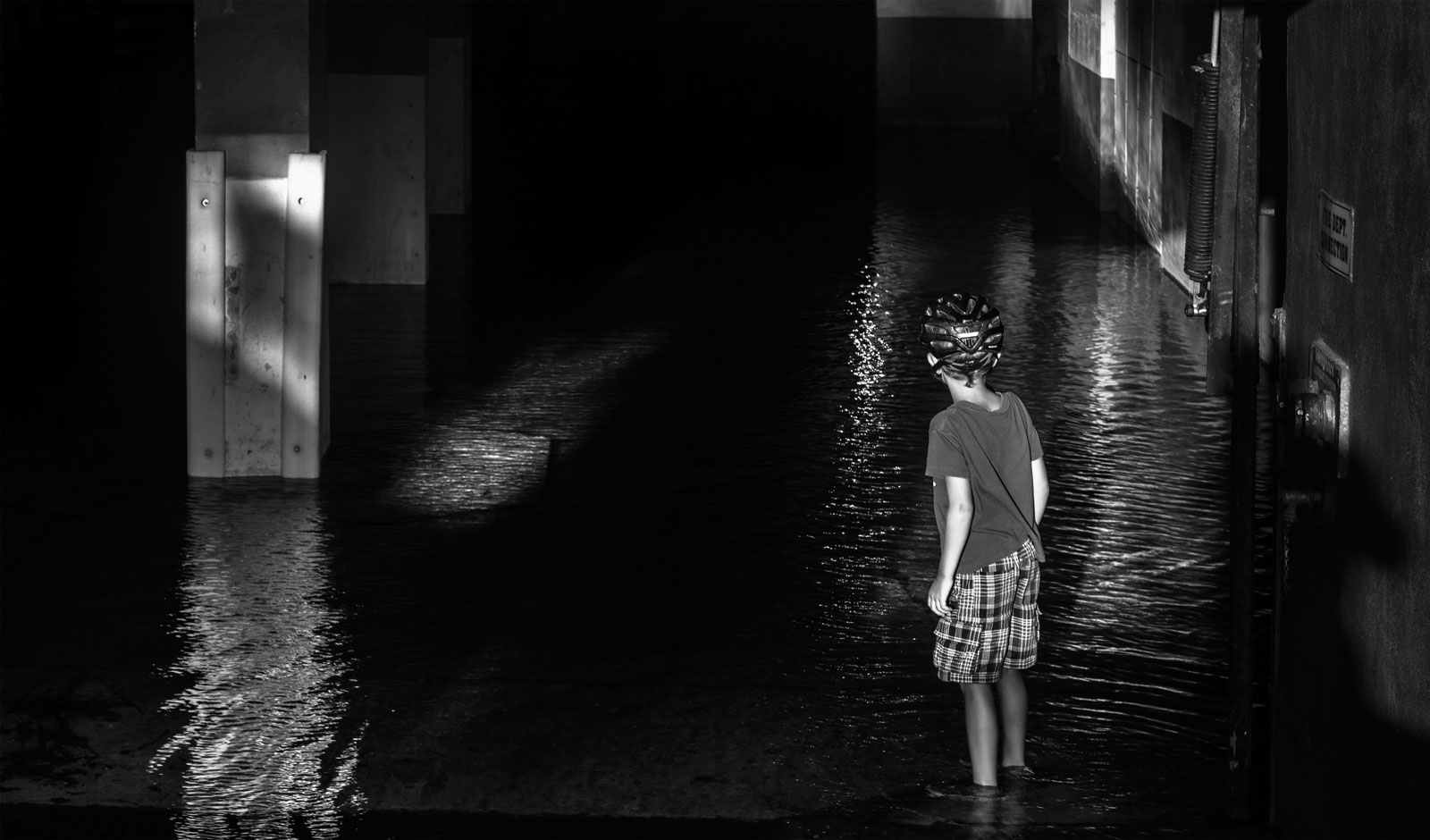 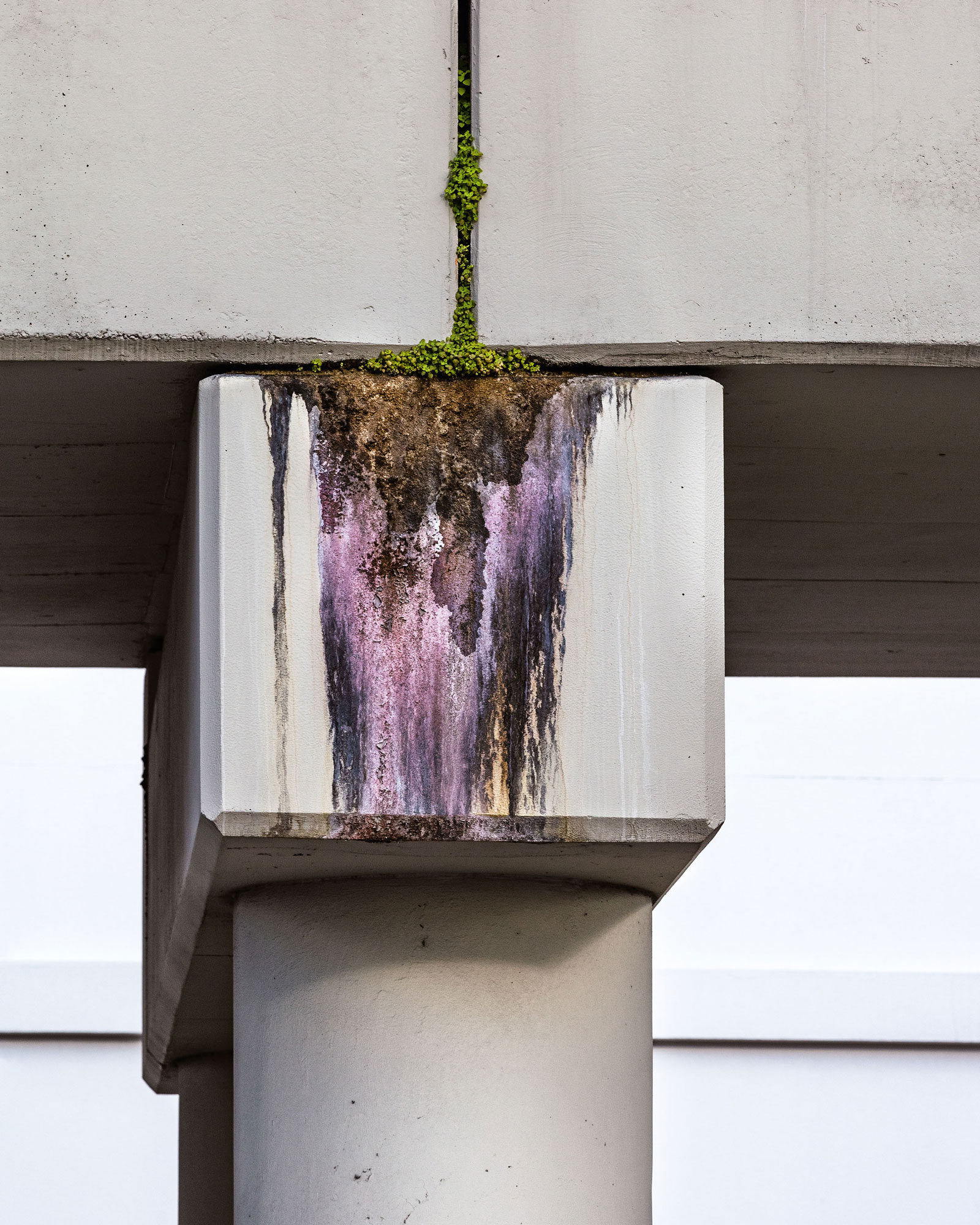 Samoylova recalls a fellow photographer’s warning her not to feel “too much sympathy for the light,” but she couldn’t help it. She traces lines like a painter: the long neck of a flamingo, a fishing pole, a mangrove branch on which her young son balances at sunset. In my favorite image, blown mangrove leaves blanket a pool after 2017’s Hurricane Irma, transforming the scene into what Samoylova describes as a near-Monet.

At the studio, she recounted her own Irma experience, stuck in a flood zone on Miami Beach. Her family couldn’t evacuate before the roads became frozen with cars, the gas pumps depleted from Florida all the way to the Carolinas. In one of the book’s black-and-white spreads, an hourglass-shaped causeway looks almost severed by water, as if to suggest a long walk off a short plank. FloodZone reminds me of the Miami I don’t notice until I do: that the clouds sometimes create the illusion of a mountain range, that all the paint is cracking.

FloodZone by Anastasia Samoylova is published by Steidl.

Monica Uszerowicz is a writer and photographer in Miami, Florida. Her work has appeared in the Los Angeles Review of Books, BOMB, Artforum, Art in America, Filmmaker Magazine, and elsewhere. (May 2020)

Swampland Sublime: The Landscapes of Louisiana

As early as the 1840s, Louisiana landscape painters were already under the influence of Hudson River artists such as Thomas Cole and Asher B. Durand—whose works had made their way into New Orleans collections—but what’s notable is how far local painters succeeded in developing a vernacular of their own.