In a corner of the painter Chantal Joffe’s studio, scenes of family life unfold across a series of canvases. In one, a days-old baby, wriggling and pink, is bathed in a small tub. In another, a woman smokes languidly next to a toddler in a smock. Three little girls, all bangs and bony knees, jostle side by side. Snapshot-like, every vignette is rendered in Joffe’s signature quicksilver strokes, tender yet devoid of sentimentality.

The artist paints and draws at speed, using oils mixed with linseed, or, more recently, soft pastels, which allow her to keep pace with time, to defend experience from forgetting. With each sweeping stroke, she charts life on the point where things change—adolescence, pregnancy, grief, old age—suggesting, when you are looking at Joffe’s work, that you are viewing the artist processing the world in the moment, up close and, at times, overwhelming.

Joffe’s earliest philosophy as an artist emerged during a formative period of isolation. When she was eleven, her family moved from Vermont to Zagreb, in what was then Yugoslavia. Living in a cramped flat, Joffe longed for the friends she had left behind, and to compensate, began to make them out of paper, poring over old school photographs in an early act of fidelity to truth and honesty in her portraiture. It taught Joffe something about art that has endured: that in depicting others, she can breach the distance between people, allowing her to drift, intoxicatingly, in the “sensory explosion” of another, “their themness,” as she puts it.

Solitude, too, has provided a recurring theme, and Joffe is a master of the self-portrait, ballast to this urge to dissolve herself in others. In 2018, in the wake of a painful split from her former partner, she spent a year painting her own image, starting afresh each day, as if patching up the seams of a self, working out how to keep it whole.

The following interview took place in Joffe’s Northeast London studio in August, almost five months after measures to slow the spread of coronavirus in the city were imposed. (This conversation has been edited and condensed for length.)

Imogen Greenhalgh: How has the lockdown period been for you? Have you had many visitors to the studio since measures eased?

Chantal Joffe: Only one other so far, a young man—a ballet dancer—who sat for me. It has been odd, hasn’t it? Our human relationships have had to change. I live next door to my sister, but I’d only see her from her front doorway. In a strange way, because I tend to worry so much, I think it helped me. When it was all starting here, in March, friends would call me to ask if I was hiding in a bunker somewhere—but I was actually okay. I half-expect awful things to happen. People who have never felt fear felt it all the more profoundly, I think. The shock—everyone reeling that something so sci-fi can happen, almost beyond our imagining.

What was particularly stark to me was the sudden division between youth and age. That was one of the oddest parts. I’m fifty, but where I live, in Hackney, everyone is very young, and I suddenly felt so much older, as though I’d been pushed into this weird other category of people.

What did you work on in that period? Did you manage to paint much, and did it help?

I did paint a lot; I brought my studio home with me, even though I can walk here, and at the beginning I made a series of self-portraits, which is often a way in for me. Then hundreds of paintings of this flower I was growing in a jug. It got a bit much—my daughter, Esme, would come in and say, “Another one?!” But it was the small things, in those days, wasn’t it? A friend bringing round some polenta. It mattered. I kept thinking of that Raymond Carver short story, “A Small, Good Thing.” One was always having to try and find small, good things. And painting helped, though my focus would last only for short, intense bursts.

Aspects of the experience behaved a bit like art does, in that they altered our sense of time and our attention to what is right in front of us. Do you feel your art equipped you, particularly?

Absolutely. I think lots of artists were well-equipped on a practical level, in that we’re used to solitude, to spending days in one room alone. That was a blessing. Coming back to the studio didn’t feel so different, in that sense. What was stranger to me was how exhausting little things, like a friend coming to the front garden, were.

My mum only lives down the road, so I’d go to see her on her doorstep, but after a short while, she’d ask me to go, which I totally understood. It was as if none of it was real, this weird substitution. Your real friends became the people in the TV series you were watching. It was madness, really, wanting a life that isn’t this life, I suppose.

I have a menu on my kitchen wall dated May 1986; my mum took it from a restaurant when she was younger. David Hockney had done the illustrations. And I’d stare at it and fantasize about what it would be like to be eating apple strudel on that day in that restaurant in the Eighties.

I love that, though—that sense that you might be able to travel in time, not be stuck. When there was a heatwave last summer, the worst thing about it to me was this feeling of being trapped on this planet in that exact moment. I find Carlo Rovelli’s theories of time very comforting. He says time can be fast or it can be slow, and I love that idea, the notion that time isn’t linear, just progressing ahead—your mum, being younger and eating at that restaurant, that’s somehow still taking place somewhere.

I’ve been painting my own mum a lot during lockdown, pictures of her now and when she was young. I love thinking that all of that isn’t lost—her youth, us little. It’s still present. You can hold on to the person she was.

Through painting her, you mean?

Yes, painting old photographs of her—I’ve got boxes and boxes of them. I’ve been painting this one of her reading to all of us on the sofa. And when I was painting it, I was there, in the picture: it was electric, like time travel. That’s why I love Rovelli’s ideas—that there are holes in time you can go into. 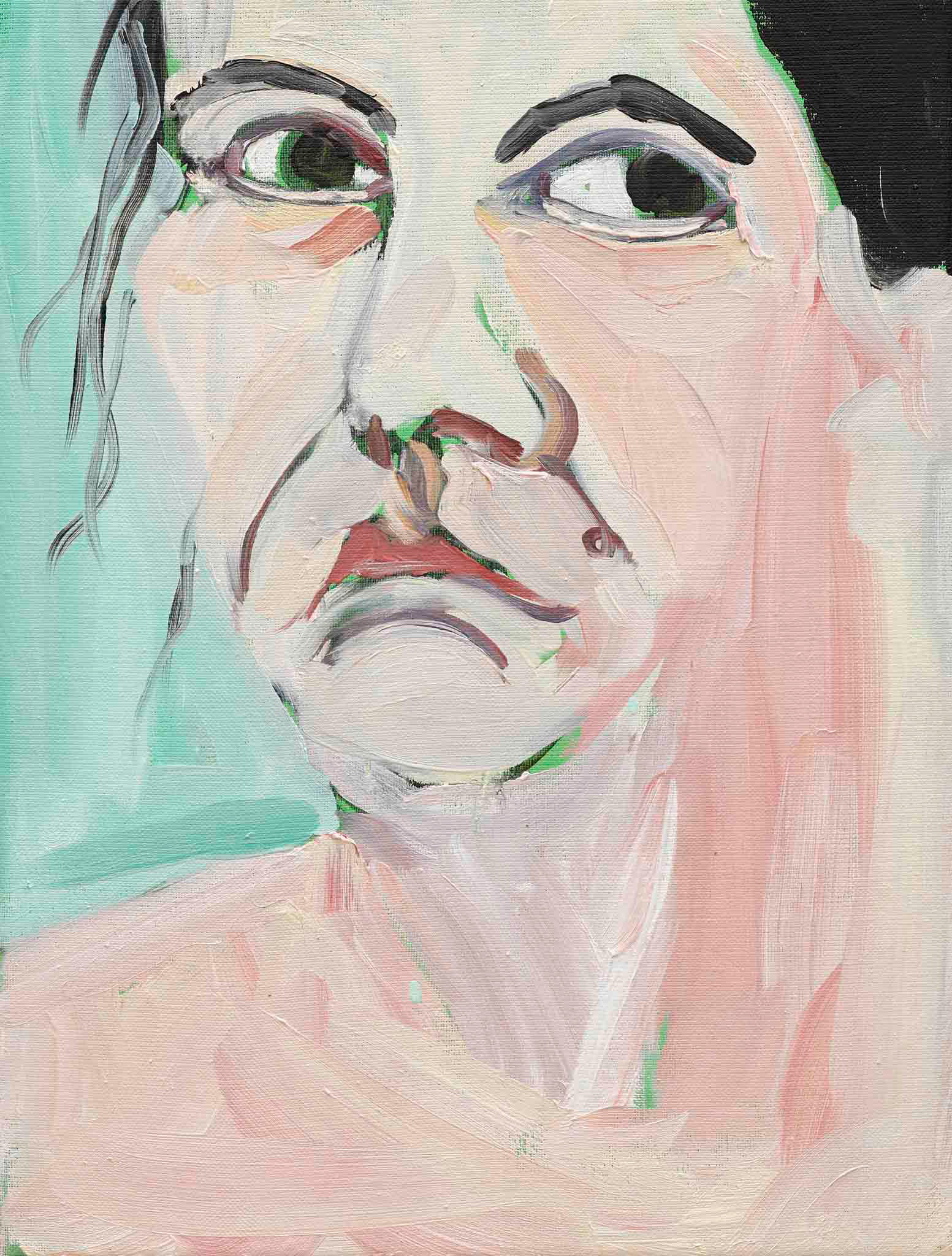 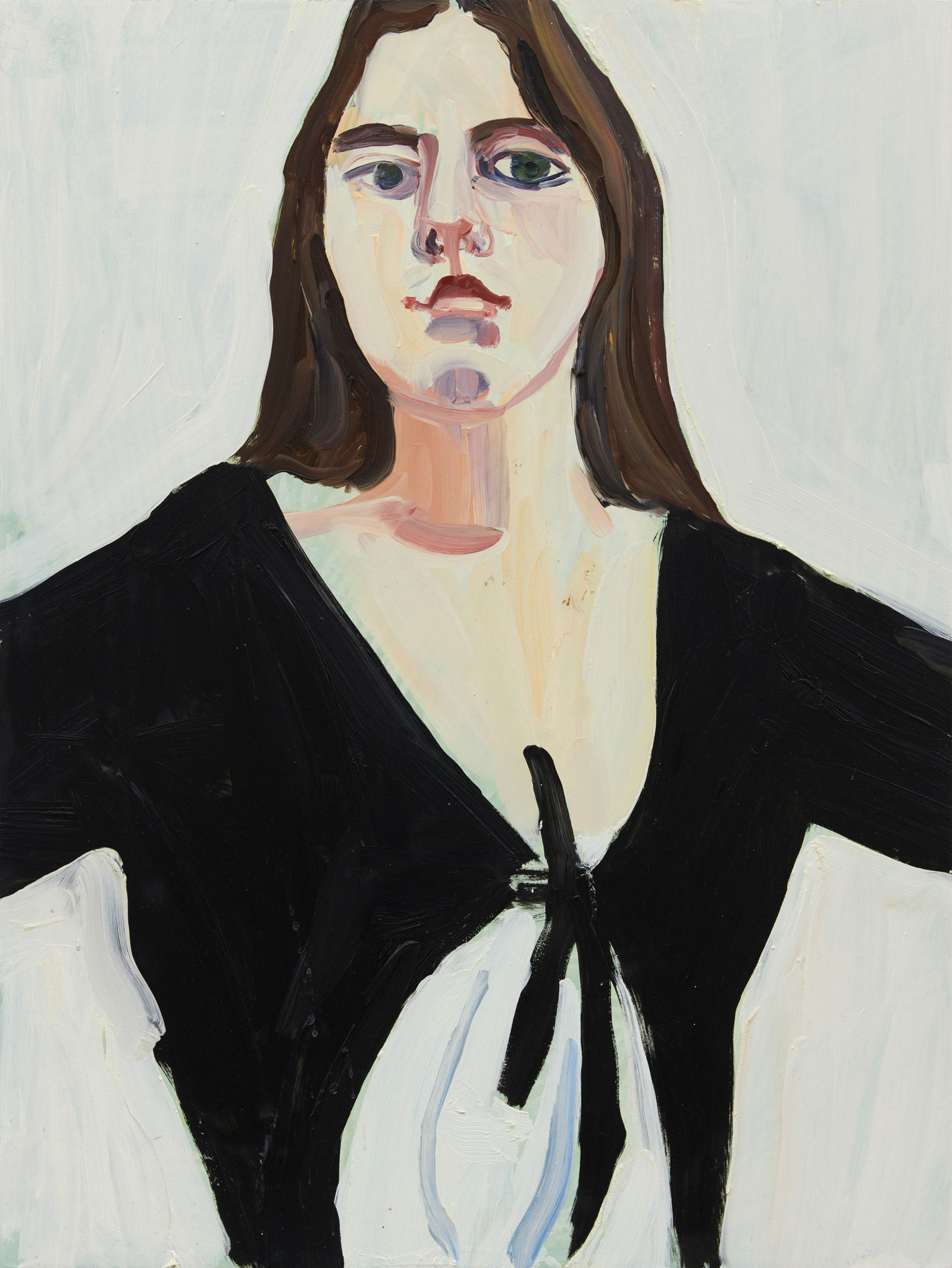 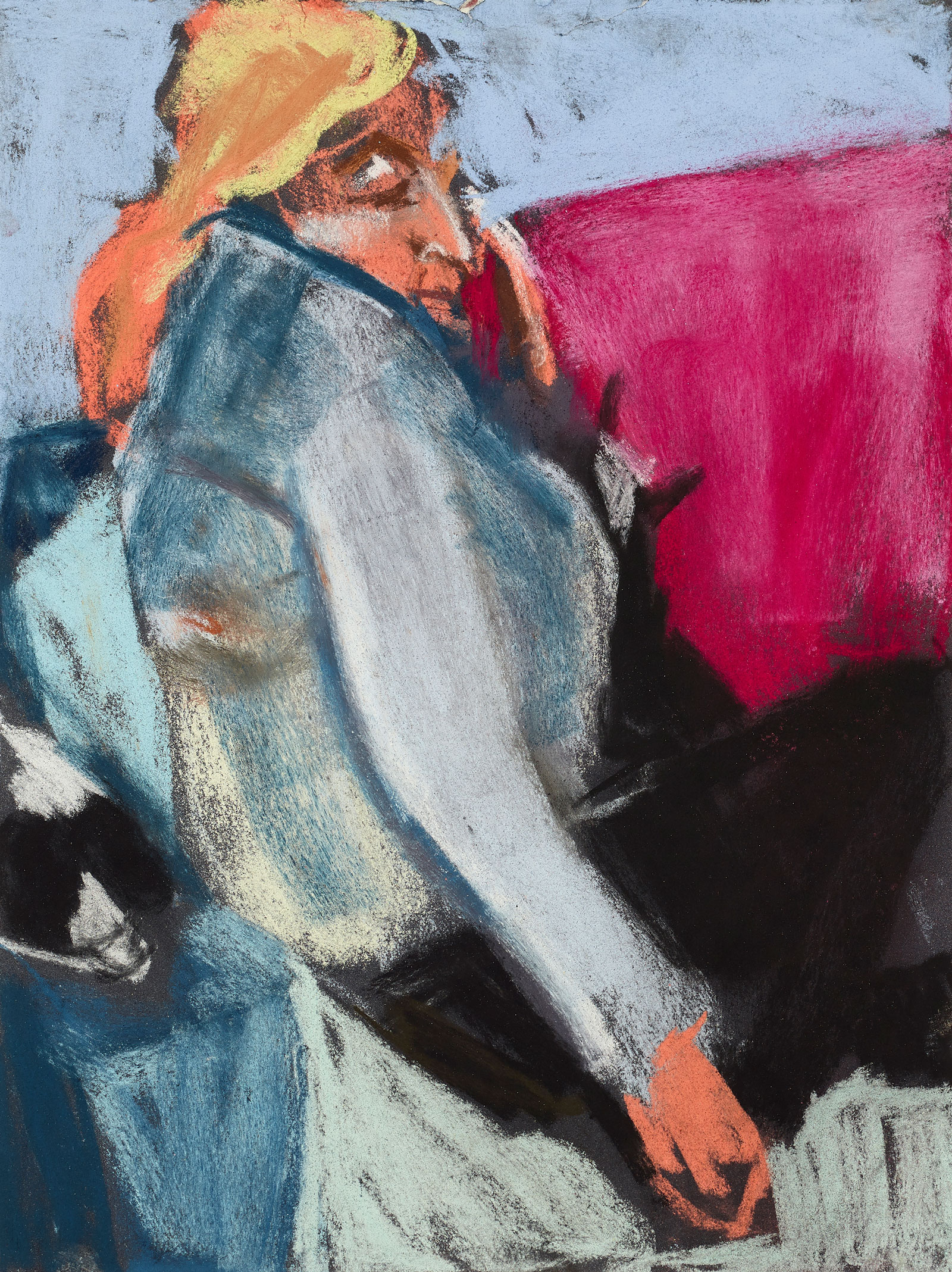 Chantal Joffe: My Mother with Spot and Fern, 2016 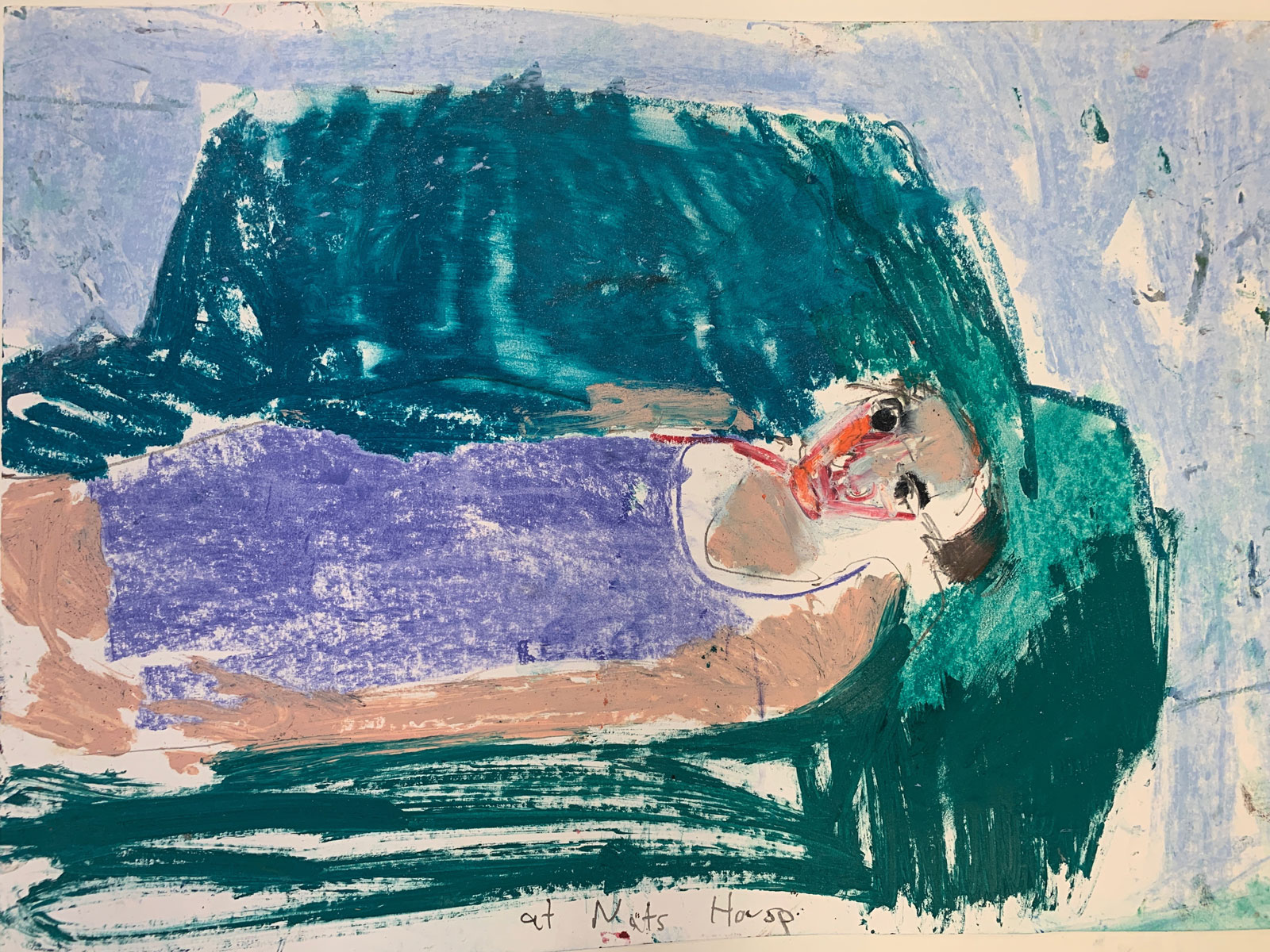 Do you often work from photos?

I paint my daughter a lot, I always have, ever since she was born. And with Esme, I can only paint her at the age she is now, if you see what I mean. But with these photos, I suppose it’s finding that wormhole, back to a time or moment long ago. When you’re painting, you’re there. It even gives me a migraine after, too much dwelling in the past. I think all my work is about closing that gap.

Your work has dealt with parts of the present or past that have been difficult, traumatic even—the end of your relationship with Esme’s father, and your mother’s aging now. Is there anything that you feel you are painting toward when you are making these works that start from a place of pain or loss?

With those self-portraits after my relationship ended, it was a need to anchor myself. It felt incredibly exposing, people coming to the studio and saying crass things—“Oh, having a bad day, were we?” that kind of thing. But I’ve started to feel that if you don’t care about the work as deeply as that, what’s the point?

I have a show this autumn at the Arnolfini Gallery in Bristol, and I’ve changed it quite radically in the last month or so, to include some drawings I made last year, after I fell and hit my head and was unconscious for a couple of hours. I’ve called them “Pictures of What I Did Not See,” and I made them using oil stick, in a bit of frenzy, not working from anything except what was in my head, which I never do.

They’re crude, but it helped to make them—like black magic, getting rid of the trauma of being out of it for so long. Not to have been absent for the experience, that was the main thing, I suppose. I wondered if showing this work would feel right, given the pandemic, when there is so much darkness. But then I realized you can’t really make a show that doesn’t have darkness in it. And I like the fact that art encompasses contradictions. Goya’s blackness, or late Guston, or Cornell and his boxes, so weird and lonely and obsessive, but so exquisite. That one he made for Emily Dickinson… Or Emily Dickinson herself, paring back, distilling. All art ends up being that, a stripping away, I think. You paint the place you’re trying to head.

“Chantal Joffe: For Esme—With Love and Squalor” is at the Arnolfini Gallery, Bristol, through November 22. “Chantal Joffe” will be on view at Victoria Miro, Wharf Road, from November 10 through December 18.

Imogen Greenhalgh is Deputy Editor at Royal Academy of Arts, London. She has written for a range of publications on contemporary art, craft, and design. (September 2020)

‘Language Like a Pickaxe’: An Interview with Chloë Bass

I first encountered the work of conceptual artist Chloë Bass when I came upon a reflective billboard—a giant mirror—planted in the grass of Harlem’s St. Nicholas Park, with the words “How much of love is attention?” written across it.

Painting a Knotty Landscape: An Interview with Yevgeniya Baras

Yevgeniya Baras’s small, knotty paintings look like talismans from an alien culture. Pushing aside painting norms, she works on both sides of the canvas to slowly conceal and reveal cryptic and voluptuous iconography.