In August I spent two weeks traveling around Ukraine by train, using my sketchbook to document quotidian existence in the shadow of Russia’s invasion. By the time I arrived the Ukrainian army had largely pushed the war back to the country’s south and east. Lviv, Odesa, and Kyiv had returned to vivid life. Kids tore around on scooters. Buskers played the bandura. Babushkas sold vegetables off blankets. Girls with perfect blowouts smoked shishas in cafés that spilled out over cobblestone streets. But it’s a deceptive sort of enchantment. In ways large and small, the war had mutilated every person’s life.

Some people I met had fled the destroyed cities of Mariupol and Kharkiv. Everyone had relatives in the armed forces. Everyone had loved ones who were dead, displaced, captured, or scattered across Europe. Then there were the people they had once loved but now no longer spoke to, because they lived under Russia and supported the invasion. “This war has taught us how to hate,” an older woman told me in Kyiv. “I would kill an invader myself if I saw one. Any granny here will tell you the same.”

“We have to win,” said Khrystyna, looking out the window of the train compartment we shared between Lviv and Kyiv. She was in her twenties, covered in tattoos, and had spent the last decade in Brooklyn. Then the war started, they drafted her dad, her grandmother had Alzheimer’s, and her mother needed her to come back home. She told me the invasion had clarified things for her; she, and everyone, could see the value of their country anew. “We have to win because we are good, and brave. But we’re losing so many good people. They are just losing losers and rapists.” Outside the window, the endless wheat fields suddenly gave way to a blur of hallucinatory yellow. She grinned. “Look! Our sunflowers!” 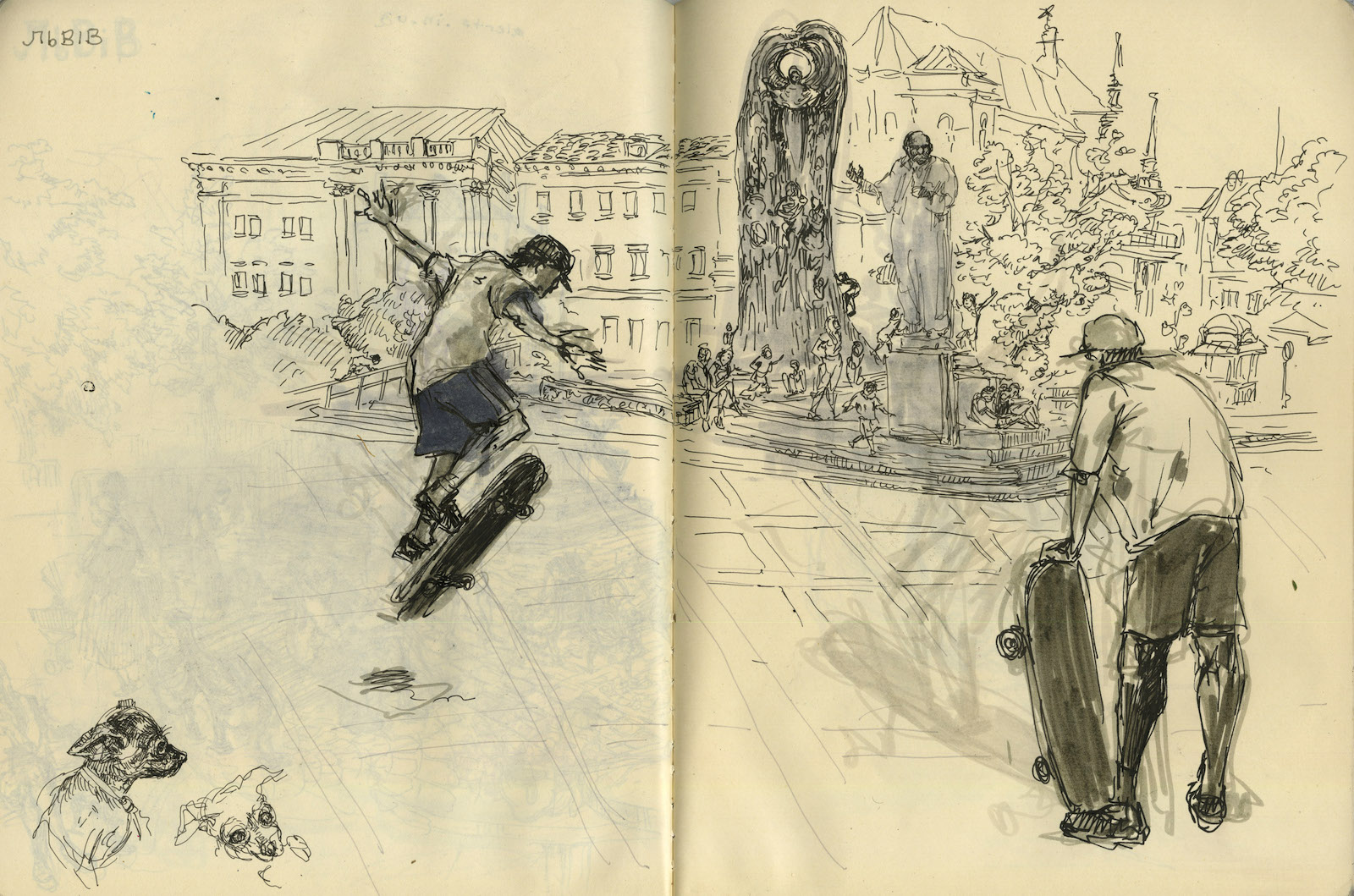 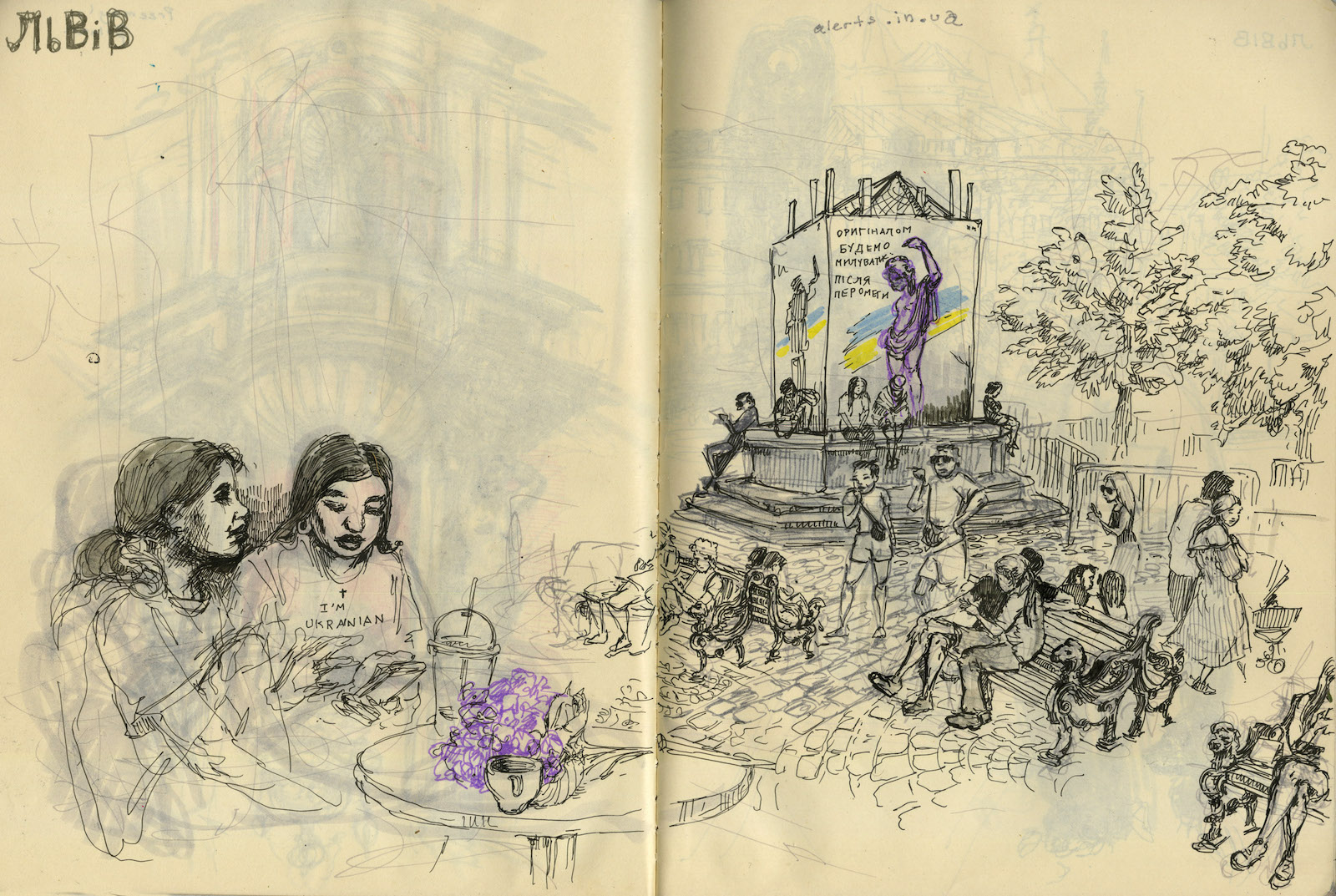 Lviv is a lovely city, Austro-Hungarian until World War I, stylish, glamorous, and grand. Nymphs writhe across the facades of baroque buildings. Instagram fitness influencers stream their lunches at archetypical hipster cafés. I sat on Svobody Avenue and drew the skateboarders practicing their kickflips in front of a monument to the national poet Taras Shevchenko. The afternoon sun was bright, the air warm enough to feel like a kiss. It was impossible to believe this was a country under invasion. A half hour later, the air raid sirens began.

In the beginning, Russia justified its invasion of Ukraine by claiming it wanted to protect Russian speakers from a genocide. It then proceeded to decimate the Russian-speaking city of Kharkiv. Later, it fell upon the Nazi excuse: just because Zelensky was Jewish didn’t mean he couldn’t be a Nazi too, Foreign Minister Sergey Lavrov claimed. After all, “Hitler had Jewish blood.”

Valeriana Majalis, a stand-up comedian from Kharkiv who grew up speaking Russian, fled to Lviv. She is half Jewish; in her act, she jokes she is half Hitler. She performs at Cult Comedy Hall, a dark underground joint a few blocks from Potocki Palace that looks straight out of New York’s West Village. The shows are in Ukrainian and English, and much of the cover goes to the Ukrainian Armed Forces. “Motivations in our country are quite different,” she joked in one of her sets. “I have a grandmother who used to say: ‘I will not die until I have married off all my grandchildren.’ Now she says, ‘I will not die until Putin dies.’” 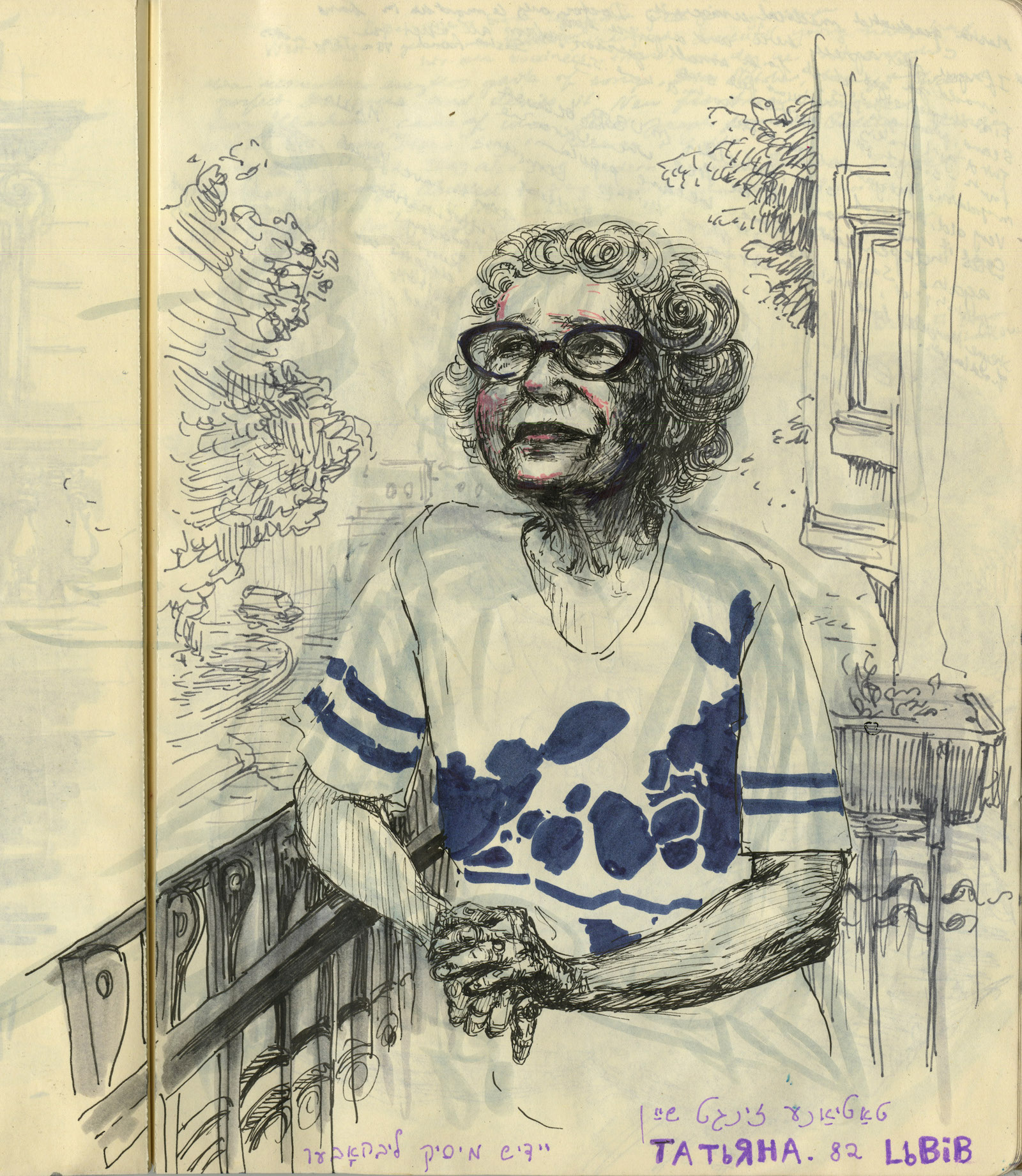 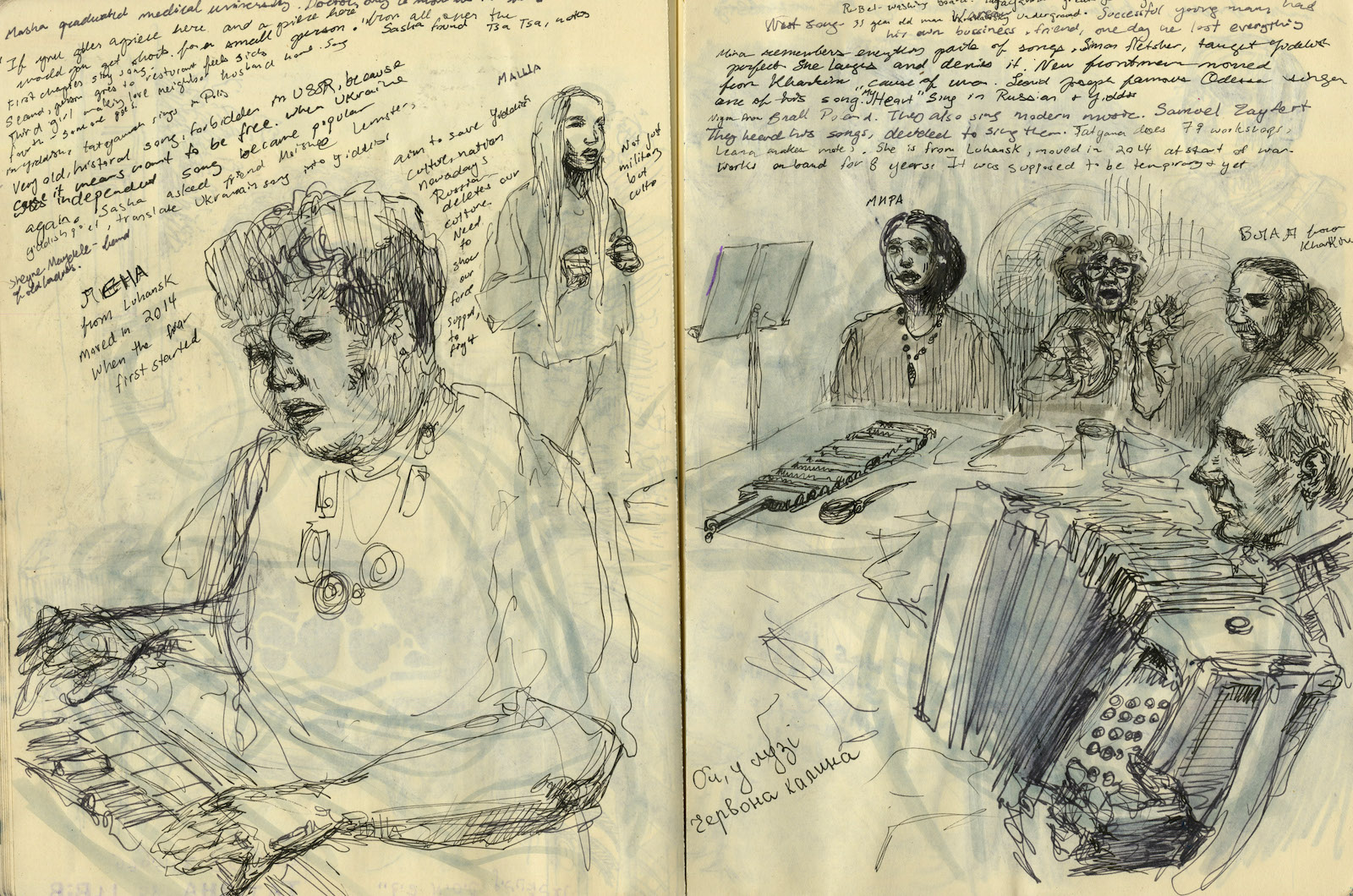 The Shtrudl-band rehearses in Lviv, August 9, 2022

Lemberg, as Lviv was known in Yiddish, was over a third Jewish before the Holocaust. Today there’s little evidence of this, aside from some monuments, the desolate Jacob Glazer shul, and ghostly Yiddish signage that still lingers on the facades of a few shops. A small but passionate group of Yiddishists—Jewish and not—has kept the language alive. I visited the apartment of eighty-two-year-old Tetyana Sukorkina to watch the Shtrudl-band rehearse. Tetyana was born in Warsaw, but her parents fled to Lviv when she was still a child. After she retired from her career as a nurse she decided to throw herself into Jewish music, which she sings beautifully with mischief and passion, sometimes accompanying herself on the tambourine. The other musicians were arrayed around her, like courtiers to the queen. They alternated traditional songs of thieves and lovers with newer stuff, like a recent Yiddish translation of the patriotic Ukrainian march “Oi u Luzi Chernova Kalyna” (“Oh, the Red Viburnum in the Meadow”). The sound of this language, sung in a country where eighty years ago almost all of its speakers were murdered, was enough to bring tears to my eyes. 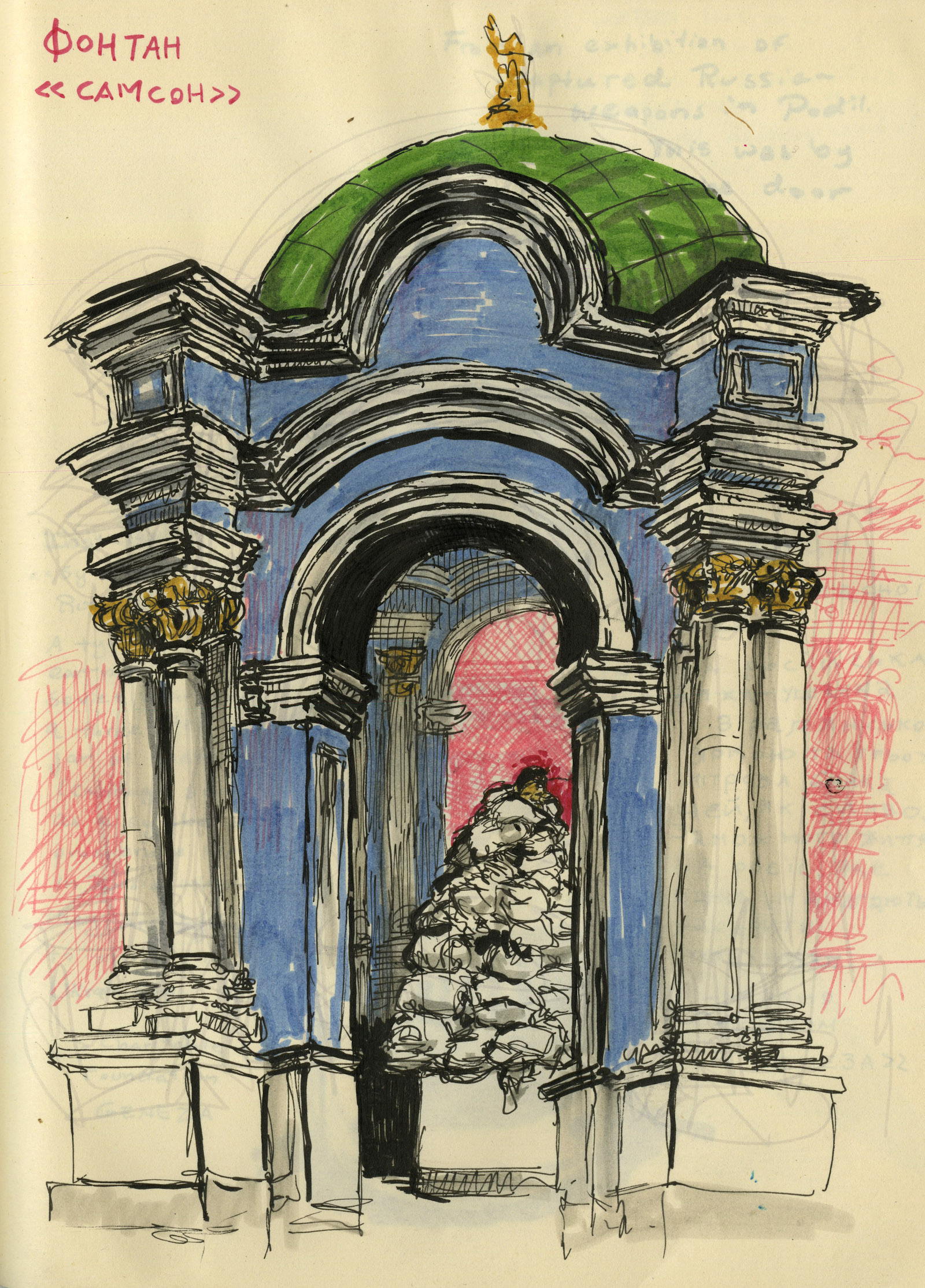 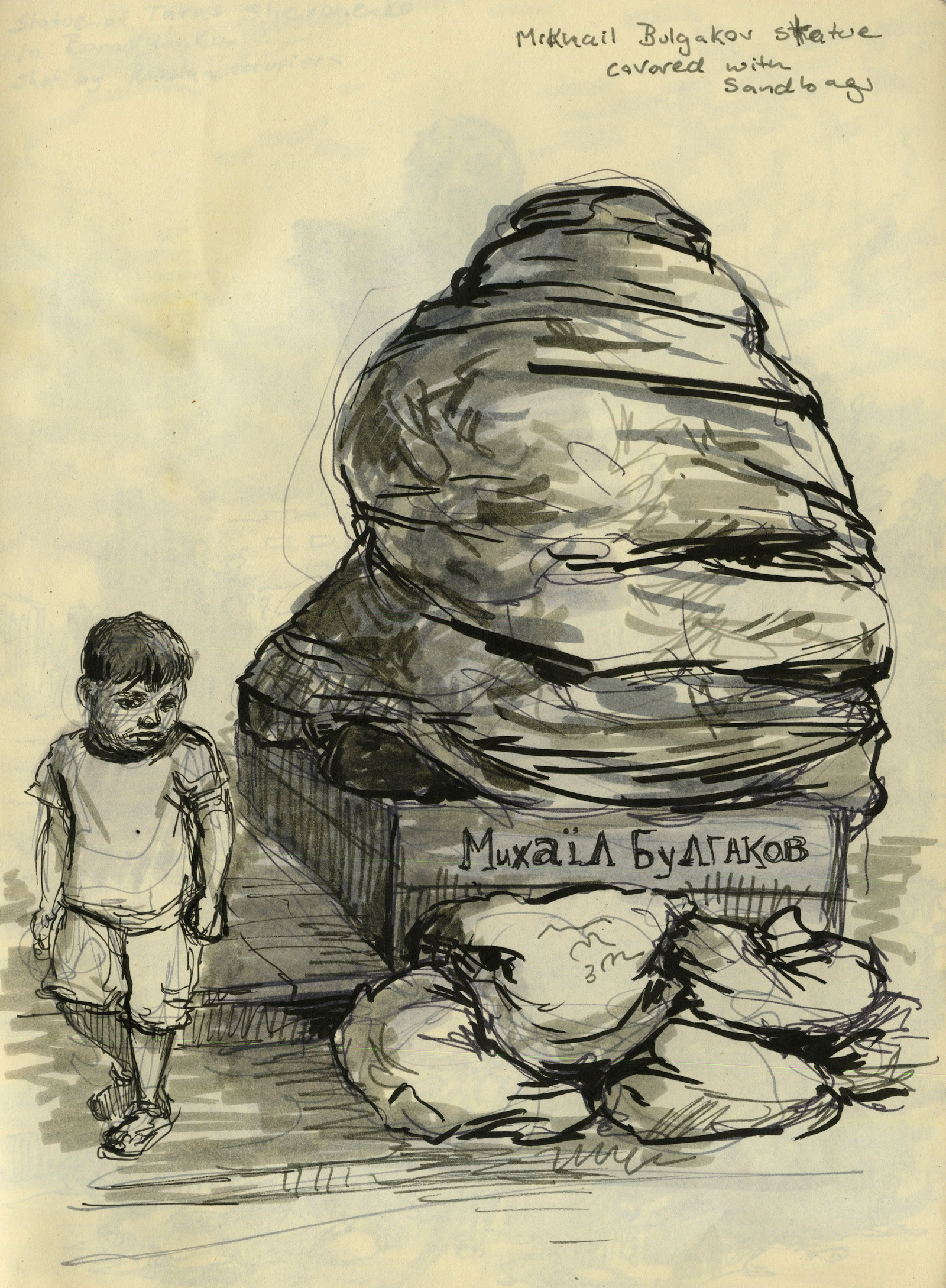 A monument to Mikhail Bulgakov in Kyiv, August 7, 2022 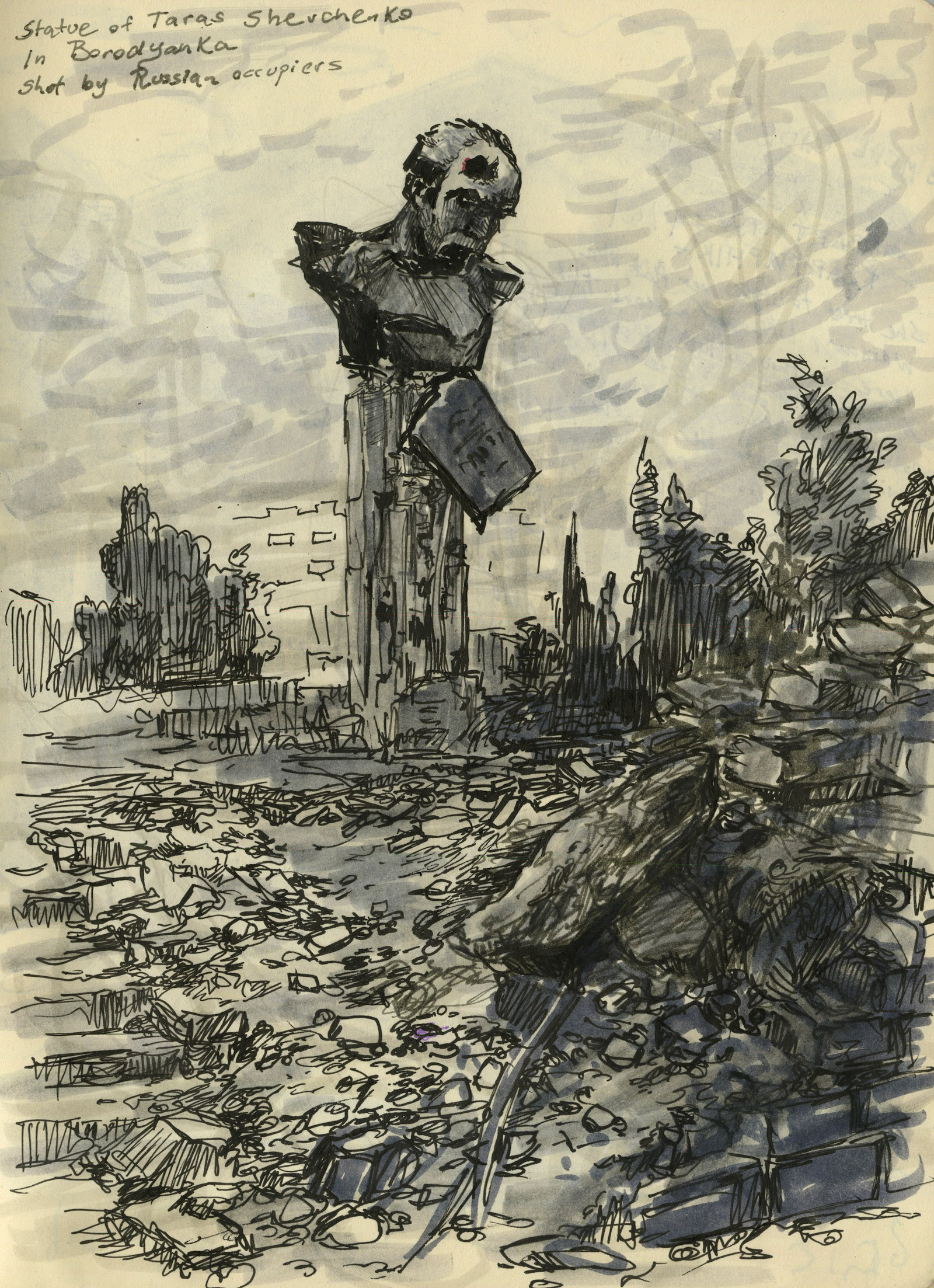 A bust of Taras Shevchenko in Borodyanka, August 5, 2022

Sandbags surround Kyiv’s monuments. In a square in the historic neighborhood of Podil, where a baroque fountain depicts Samson wrestling a lion, I could barely see the top of Samson’s head. The Soviet government had destroyed the statue in 1935, then rebuilt it in 1981 to give the quarter historical ambience, and locals were taking no chances with a new destruction. And, although he was Russian, Mikhail Bulgakov, the author of The Master and Margarita, got equal protection for his elegantly seated bronze. The sandbags went up in the first days of the war and are meant to protect the statuary from shrapnel. Since the war began, Russia has damaged 186 Ukrainian cultural sites. In Borodyanka, occupying Russian troops used a bust of Shevchenko as target practice.

On April 28 Russia shelled apartment buildings in Kyiv’s Shevchenko neighborhood, killing radio journalist Vira Hyrych. Tetyana Teren, the executive director of PEN Ukraine, took me to see the blackened edifice where Hyrych had died. “Vira saved her whole life to get this apartment,” Teren told me. She paused often from emotion; her own nephew had died fighting shortly before we met. “We will think of our pain after victory,” she said. “Now we need to have inner resources: fighting, working, supporting our army.”

In 1935 the Soviet government destroyed the Mikhailovsky Cathedral in Kyiv. They pulled down the golden domes, sold off the silver gates, and carted away the Byzantine mosaics to various museums in St. Petersburg. They dynamited the rest. In 1999 the cathedral was rebuilt at the behest of an independent Ukraine. In recent months, the courtyard out front has been transformed into an exhibition ground for recently destroyed Russian military hardware. Ukrainian families stroll between the rusty tanks, already marked up with dicks, names of towns, curses for Putin. Teens clamber up the turrets to take selfies. Little kids straddle the guns. Beyond them stands the resurrected Mikhailovsky, blue and gold as a fairy tale, a reminder, above all else, of the value of persistence. 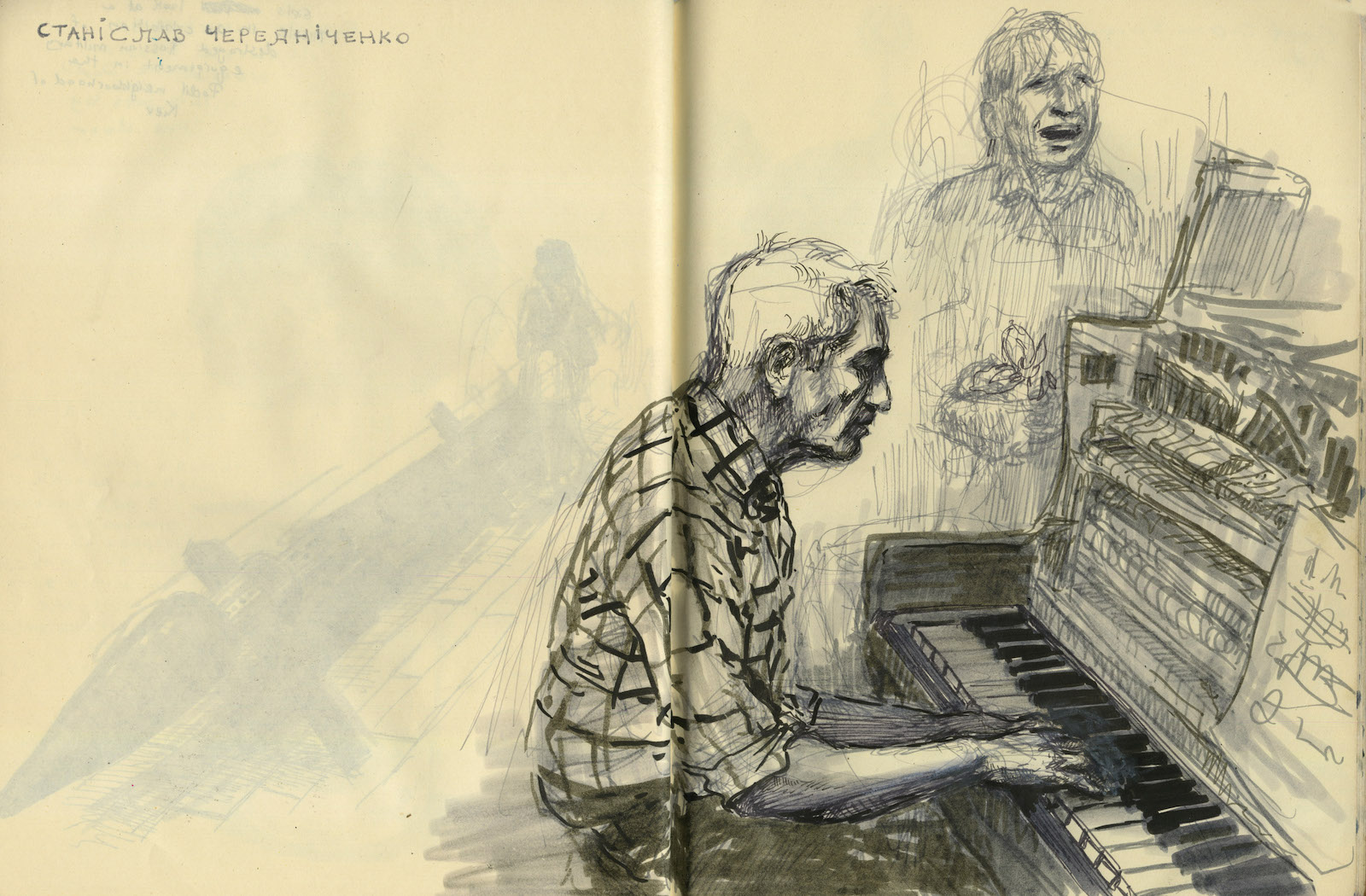 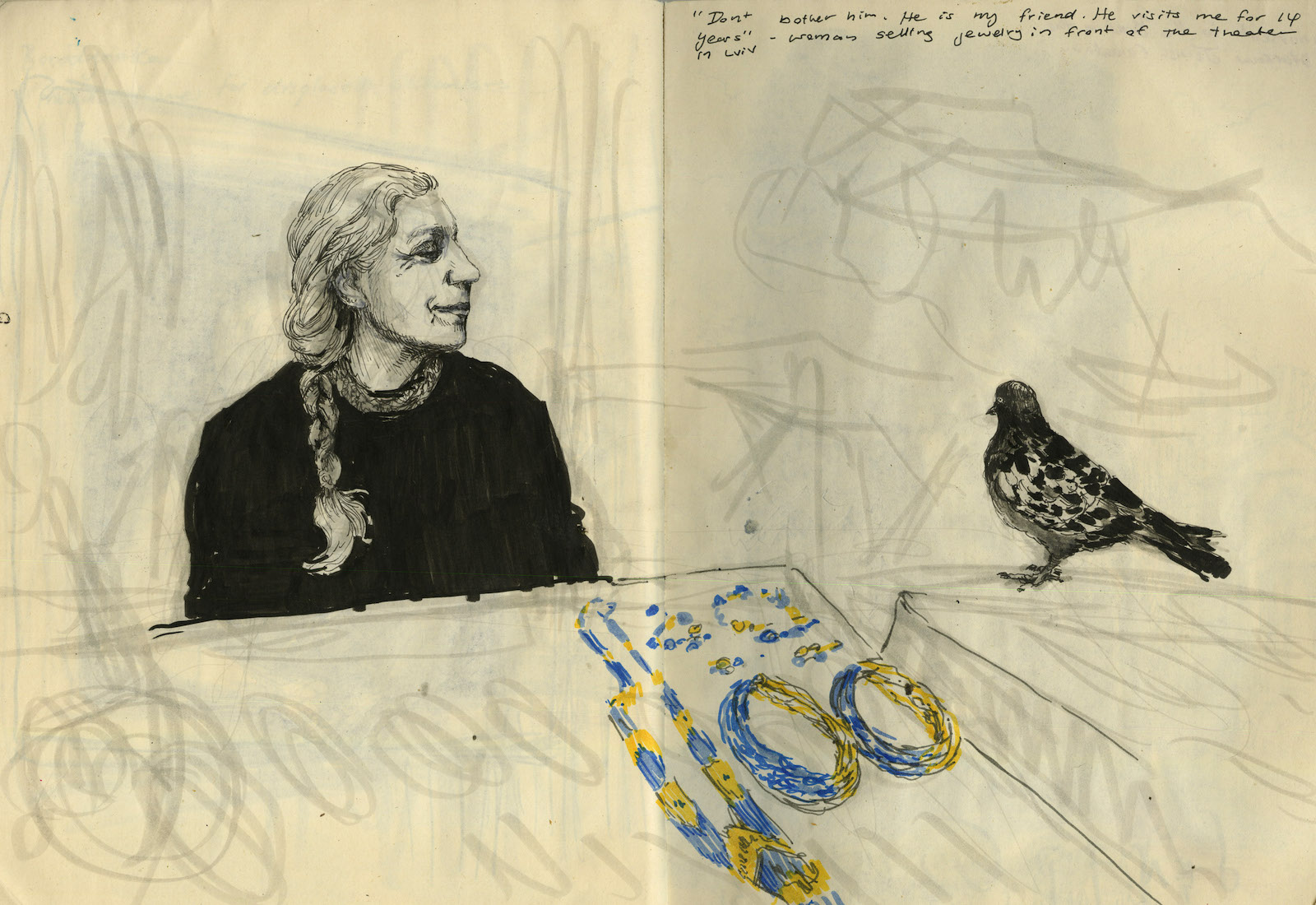 Ukraine’s national revival began in the nineteenth century, but the Russian invasion has put it into overdrive. Traditional arts like embroidery, decorative flower painting, and bandura playing are not just artifacts trotted out for tourists—they’re immediate, urgent expressions of defiance. When Stanislav Cherednichenko plays an old piano outside of Saint Sophia Cathedral, handing out Ukrainian song sheets to passersby so they can accompany him, it’s in this spirit.

As I had my coffee, I saw this soldier and his bride posing for wedding photos near Kyiv’s Golden Fort. With few exceptions, men between eighteen and sixty are not permitted to leave Ukraine. No wonder the parks seemed packed with lovers. Under such circumstances, anyone would hold on tight to their man.

An upscale little town an hour outside of Kyiv, Bucha’s name now stands for a massacre. During its occupation the Russian military murdered hundreds of civilians, including children, and left their charred corpses strewn across the streets. During these days, Vassily said, 150 people took refuge in his dojo. Its underground location made it appropriate for a bomb shelter. After the Russians fled, he was one of the volunteers who went to dig up civilians’ bodies from the forest. Some of them had been his friends. One, he said, was missing his eyes. Vassily soon resumed martial arts classes but added target shooting to the curriculum.

Ukrainian streets are filled with antitank barriers called Czech hedgehogs, welded together from every manner of metal. In the war’s early days a photo went viral of some of these hedgehogs, signed “From the Jews of Odesa.” In Odesa this August, hedgehogs blocked the path to the famous Potemkin Stairs—stairs that lead down to the harbor that Russia hit with cruise missiles on July 23, after so benevolently signing a grain export deal that promised they would do no such thing. Last year, sunbathers filled Odesa’s beach. Now this sand is full of landmines.

I met Konstantin through Anna Grechishkina, a motorcycle legend who had halted her nine-year ride around the world to come home and fight the Russian invasion. She enlisted in a volunteer battalion; Konstantin is her commander. A former military officer who Anna knew from his role as president of one of Ukraine’s largest motorcycle associations, Konstantin is, at sixty-seven, legally too old for the army. He created the battalion because he still wanted to fight. I drew this portrait on the road to Borodyanka, a town not far from Kyiv whose downtown was almost entirely destroyed by Russian bombardment during their attempt to take the capital. The bombs devastated nearby villages, and Konstantin and Anna were on their way to help an elderly woman build an outdoor kitchen near the rubble that had once been her home.

War has a universal architecture. There is the bombed-out building, detritus of daily life hanging from what used to be the floors. Then there is the displaced persons camp, at its best a collection of modular units, where the people who once lived in those buildings now contend with their viciously reduced reality. Grechishkina organized a group of motorcyclists to visit one of those camps in Borodyanka. The idea was to give the kids rides, pass out candy, lift some spirits. I climbed on the back of Konstantin’s motorcycle and joined them. It was raining at first, but soon enough a crowd of children had gathered. The bikers rode circles in the muddy field, while the kids clung to their shoulders and shrieked with laughter. Two elderly ladies watched through the windows of the shipping container in which they now lived. One of them beckoned me over and passed me a plate heaped with black bread, cucumber, and Ukrainian salo, cold pork belly. When we finished the food she gave me another plate, and then another—delighted that, even in a shipping container, she could still feed a guest.

An earlier version of this article misidentified the Shtrudl-band.

Molly Crabapple is the author of Drawing Blood and, with Marwan Hisham, of Brothers of the Gun. Her artwork is in the permanent collection of the Museum of Modern Art. (September 2022)

Scenes at the Polish border, which is seeing part of the largest, most sudden displacement of population since the period after World War II.