May I take some space to acquaint your readers with a problem in journalistic and political ethics? The September 23 issue of The New Yorker carried a story by Renata Adler on the Chicago Convention on New Politics. The story (p. 57) referred to me as one of those who, during the plenary session of the New Politics Convention, argued that the Black Caucus’s 13 Points should be endorsed by the Convention, “without modification of any kind, regardless of the substance of the individual proposals, in a spirit of interracial unity.” It further said, “That this implied a paternalistic white racism that would startle a South African plantation owner seemed not to enter the minds of these speakers.”

These statements are false: Despite considerable effort, I was not able to get the floor to speak in the plenary session at which the 13 Points were passed; secondly, had I been able to speak, I would have opposed the resolution adopting the 13 Points and moved a substitute resolution which I had written and circulated among several delegations; thirdly, I spent hours during the night and morning before the plenary session organizing opposition to flat adoption of the 13 Points and I voted “No” when the resolution came to a vote. Finally, when I did get the floor the following day I publicly referred to the acceptance of the 13 Points as an act of self-castration by the white liberals present who were seeking, by this ill-conceived operation, to become radicals.

On September 26 I wrote William Shawn, the editor of The New Yorker, to explain these facts. I also explained that it was (and is now) my view that the Black Caucus was entitled to adopt any resolutions it chose, as an equal “wing” of the Convention—but that it was not entitled to impose its resolutions on the white wing; that the white wing ought to set forth in a parallel resolution its own analysis of America, its own demands for change, and its own determination to organize for those demands; and that white radicals ought neither to patronize blacks by adopting resolutions for which they would never try to organize support, nor to betray themselves morally and politically by adopting resolutions in which they did not believe, and for which they would never find support. The substitute resolution I tried to propose would have stated this position. If the Black Caucus had rejected this position, I was quite prepared to welcome in a spirit of fraternity their creation of a separate black New Politics organization, rather than to insist on a false and meaningless “interracial unity.” All of this I said publicly, to many people, at the Convention. I never said anything else.

I saw Mr. Shawn on October 2 and talked with him by telephone several times during the succeeding few weeks. His position throughout this time was firmly opposed to printing my letter. He gave the following reasons: Miss Adler feared that printing my letter would confuse, rather than enlighten, the readers; she and he believed that my “bicameral” solution would have been just as racist as simple acceptance of the 13 Points, and therefore the suggestion I was racist remained true; Miss Adler had not heard any mention at the Convention of my proposed “bicameral” resolution, and therefore opposed my referring to it in my own letter; Miss Adler believed that my position at the Convention, if it was as I described it, was deliberately ambiguous or ambivalent. In short, Miss Adler, having first claimed to know what I said, did not even know that I was proposing a substitute resolution to everyone I spoke to throughout the day. Then, asked why five national reporters saw my position as unambiguous and the precise opposite of what she ascribed to me, Miss Adler said that she had seen through the cover to the reality, and they had failed to do so. She and Mr. Shawn then rejected my suggestion that my letter be printed and Miss Adler given as much space as she liked to reply to it.

After two weeks of discussion, Mr. Shawn told me that Miss Adler had with extreme reluctance suggested that she write a letter repeating her original charge and reporting that I said what I wanted to do was have the Convention “adopt the 13 Points as a legitimate statement of one wing of the Convention” (a partial quote from some mimeographed notes on the convention that I had circulated to friends and reporters). I pointed out that this would indeed baffle readers as a legalistic point, in the absence of any clear reference to my bicameral effort. So I suggested that she should quote the next ten words from my notes on the Convention: “and adopt simultaneously a radical statement for the ‘white’ wing.” Miss Adler and Mr. Shawn refused, citing the same grounds as those for refusing to print my letter, and that is where matters now stand.

In all this, Mr. Shawn adamantly refused to check the facts with six or seven persons from various political positions who were at the Convention—including the man who introduced the “endorsement” resolution that I opposed. Mr. Shawn insisted that he had no alternative but to believe his reporter—and on the basis of that belief to decide not only what The New Yorker said, but what I was allowed to say in its pages.

There seem to be three levels of issues in this matter. First, what kind of factual reporting did the Convention get? Secondly, what kind of political analysis went into such imputations as “white racism”? And finally, what kind of journalistic ethics justify the refusal to print either my letter or even any quotation from my notes, except for one statement ripped utterly out of context and meaning?

The last question is easily answered. It is a travesty of journalistic honor for a magazine to deny someone who believes he has been traduced in its pages the opportunity to speak in his own voice—and it is abominable for it to propose that he be quoted in a deliberately distorted version of his own voice. It shows the crudest contempt for readers to say that a reply would confuse, not enlighten them—even if the reply were followed by a reporter’s response. The New Yorker’s stated reason for printing no letters of this kind is that its famed staff of fact-checkers prevents it from making any factual errors at all. This is certainly false. Although its explanation is different from that of the Reader’s Digest, The New Yorker’s behavior concerning letters is the same; and thus The New Yorker as well as the Reader’s Digest betrays the proclaimed principles of the liberal democratic press.

What about “the facts”? What about a reporter who claims to have heard me speak “in plenary session” although I never got the microphone that day? Has The New Yorker ever considered that no one observer of an event can possibly get it all “right”—even assuming there is such a thing as “rightness” in social observation independent of the observer’s social location? Are The New Yorker’s simple-minded sense of factuality and its refusal to print a dissenting view consistent with the politics of the “liberal” sort that Mr. Shawn and Miss Adler profess? Perhaps reasonable “liberals” can believe that a bicameral treatment of the black and white movements (in the tradition of Calhoun’s “concurrent majority”) is racist, because not of the simplistic one-man-one-vote-and-the-devil-take-the-minority view; but can they believe it is indistinguishable from a situation in which the racial minority dictates to the racial majority (the situation I was opposing)? Can they not see how reasonable liberals and radicals might think that dictation by a racial majority or one-man-one-vote—in a situation where the black organizations could not afford to send as many representatives as the white ones and where the two movements differed so deeply in outlook that both had great difficulty in accepting decisions made by the majority of the other—was also racist in itself?

It was blindness to these distinctions and to the new efforts of some liberals and radicals to grapple with what racism means in America that made The New Yorker’s coverage of the Convention more incompetent than that of other journals. (Many others at least mentioned the bicameral notion; The New Yorker did not even do that.) It is hard to believe that this political blindness and stereotyped liberalism was not also responsible both for The New Yorker’s peculiar deafness in Chicago and its ethical insensitivity to the demand that its errors of fact be corrected. 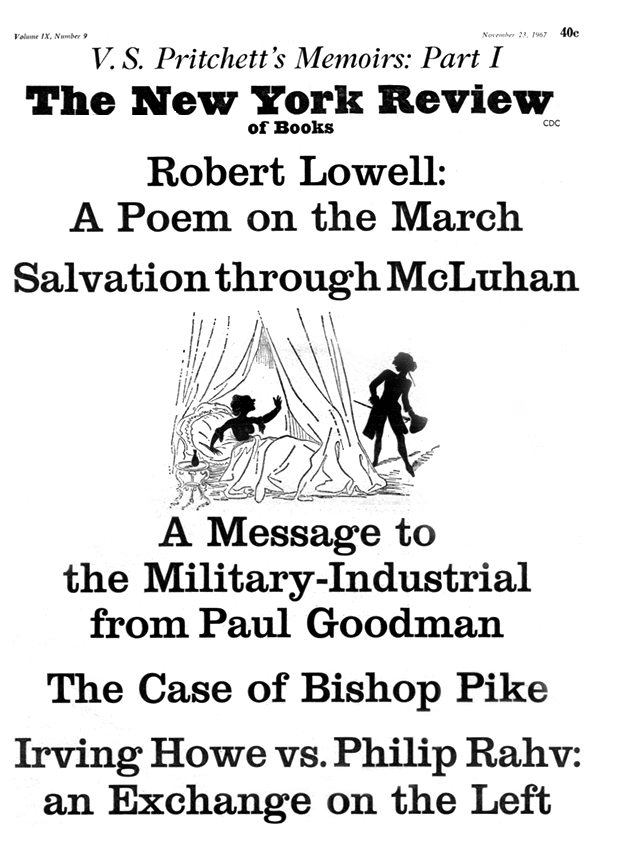 More by Arthur I. Waskow

More by Arthur I. Waskow

She Woke Them Up

An Exchange on “Racism”

They’d Rather Be Left

‘The Not Returning Part of It’