Clear and Present Danger from the December 5, 1968 issue

Your choice of a delegate from the National Committee to Abolish HUAC to review The Committee [December 5, 1968] awakens my appreciation for the tact shown by the editors of the National Review, in not calling in a past commander of the Veterans of Foreign Wars to do the job for them. Still, Vern Countryman’s remarks serve to demonstrate why many people who have small regard for the Un-American Activities Committee are nonetheless unable to take his organization seriously.

Your innocent reader is likely to come away from his essay believing that The Committee is a defense of the Committee. Mr. Countryman seems to believe it too. Our communication failure, I think, has two sources: First, Mr. Countryman is disappointed that unlike other studies which “have been severe in their condemnation of HUAC and unanimous [a grand overstatement—W.G.] in their conclusion that it should be abolished,” my book’s ending is “inconclusive.” Because I forbore from signing off with a ringing call for abolition, he finds that my “ultimate judgment on HUAC hardly seems worth the labor of author or reader.” Can it be that Professor Countryman suffers his way through legal opinions only for the kick of coming finally upon “Judgment Affirmed”?

Secondly, your reviewer seems dismayed by my failure to portray all the unfriendly witnesses as pure in heart, mind, and actions. My excuse here is simply that it seemed to me relevant to report that the Committee has called up a lot of fools, hypocrites, and Stalinists over the years. The point, surely, is that Congressional harassment is not defensible even in such desperate cases. A point that can be maintained without a coat of whitewash.

I agree with Mr. Countryman that the Committee’s broad, vague mandate is an invitation to abuse, and I think my book makes it abundantly clear that it has been outrageously abused for thirty years. But writing off the Committee as “un-American,” as its professional opponents like to do, is hot air and bad for the mind. It’s time we learned from the Committee itself that tossing off slogans like “un-American” is an invidious substitute for useful discussion. As for my views on the Fifth Amendment, Dean Griswold’s examples still seem far-fetched to me and Sidney Hook’s comments still seem sensible. Every person in this country has an inviolable right to refuse to give testimony that he feels may incriminate him, and the courts must respect his silence; but it takes a determined suspension of one’s reasoning processes for an outsider to draw no inferences from such a refusal. We cannot know what the man wishes to hide but we must conclude that he is hiding something. Whether we then criticize or commend him for his action is another matter. (Nowhere have I ever referred to anyone as a “Fifth Amendment Communist,” and I do not take kindly to Mr. Countryman’s implication that I so disport myself; he really should try to make distinctions even among persons with whom he disagrees. As for his dragging in Arthur Schlesinger and Richard Rovere, who committed no crime beyond saying they liked the book, that seems to me a flagrant case of guilt by association, and I call upon the National Emergency Civil Liberties Committee to take action.)

No one is likely to quarrel with a reviewer’s conclusion that liberals ought not to be “held by fear and panic”—but willful simple-mindedness is not a sturdy support for political courage. Mr. Countryman, with no humorous intent I’m sure, sets down his criterion for an acceptable book about the Committee in his first paragraph, when he chides me for providing less evidence than did earlier books that it should be abolished. (As a matter of statistical fact, with all respect to other books, The Committee beats every one of them handily when it comes to evidence, con, pro, and ambiguous, measured in ounces or feet, and your reviewer has drawn liberally upon this supply.) The accumulation of evidence on one side of a case is an appropriate objective for a prosecutor’s brief, which, I gather, is all Mr. Countryman wants on this subject; his essay is a fair specimen of the genre. I must leave that line of work to others, but to assist him in sorting out his good guys from his bad guys without strain, I’d like him to know that if I had my way, the Committee on Un-American Activities would be abolished tomorrow. I trust that most other readers of The Committee will have gathered as much from the book.

Mr. Goodman has found another category. Those who believe that HUAC should be abolished (and both The New York Review and I took pains to identify me as one such) are not qualified to review a book on HUAC which does not call for its abolition. Apart from this inherent disqualification, my errors as identified by Mr. Goodman appear to be trivial or nonexistent, viz;

(1) My statement that three earlier books were unanimous in their conclusion that HUAC should be abolished is “a grand overstatement.” Is it? “If HUAC were abolished, Americans could exercise their freedom to dissent and to criticize without fear…. The image of America…would no longer be shamed by an agency of Government which exploits fear, promotes hate and uses falsehood as weapons of ideological warfare”—Donner, The Un-Americans (1961), p. 307. “All things considered, it appears that the record of the Un-American Activities Committee…is such that the wisest policy to follow would be the complete abolition of the committee”—Carr, The House Committee on Un-American Activities (1952), p. 459. Father Ogden, writing just after Martin Dies had announced that he would not stand for re-election, assumed that HUAC had “come to an end in 1944” but clearly approved of its demise. HUAC “stands in the history of the House of Representatives,” he concluded, “as an example of what an investigating committee should not be”—Ogden, The Dies Committee (1945), pp. 295-296. (Let me note at this point an error in my review not listed by Mr. Goodman. John Rankin’s parliamentary coup, which restored HUAC’s life, came in 1945, not in 1949.)

(2) I read legal opinions with the expectation that they will provide an explanation for the judgment with which they conclude and that the judgment will be of sufficient significance to justify the efforts of opinion writer and reader. I read books the same way. My error, apparently, lies in reading Mr. Goodman’s book this way. I quite agree with Mr. Goodman that it does not contribute to an understanding of HUAC to label it “un-American” and I did not do so. But I find it no more helpful to understanding when Mr. Goodman solemnly labels HUAC “not un-American.”

(3) I did not expect Mr. Goodman to “portray all the unfriendly witnesses as pure in heart, mind and body.” I am sure that they, even as Mr. Goodman and I, were not. My objection was that, on the basis of the unreliable evidence of HUAC, or perhaps on no evidence since he offered none of his own, Mr. Goodman joined with HUAC in labeling the witnesses “fellow travelers,” Communists or tools of Communists.

(4) The “Fifth Amendment Communist” label was invented by Joseph McCarthy, as my review made clear. But, while Goodman eschews the label he supports the theory by which it is employed when he invokes Sidney Hook’s version of “common sense” and rejects as the product of “foggy thinking” a demonstration that the inference upon which that “common sense” rests is an irrational one.

(5) I would not charge Richard Rovere or Arthur Schlesinger, or anyone else, with anything at all because of their “association” with Mr. Goodman through general approval of his book. But I charge them both with muddle-headedness for their own views on this subject—Rovere for thinking that it contributes to our understanding to have Goodman pronounce HUAC “not un-American” and to demonstrate “the evenheadedness of his contempt for the Stalinist Left and the yahoo Right” and for his own observation that “with few exceptions, the investigators and the investigated have seemed richly to deserve each other”—Schlesinger for endorsing Rovere on the last point. Neither Rovere nor Schlesinger can know enough about the thousands of persons “investigated” by HUAC to have any basis for such a sweeping generalization. It is highly unlikely, for example, that either could claim any knowledge of even a majority of those listed as injured by HUAC “investigations” on sixteen printed pages of an Appendix to the Supreme Court brief of appellants in the Stamler case. (I also note that those two great categorizers, Goodman and Rovere, draw finer lines than does HUAC. The Committee denounces Communists—they denounce Stalinists. A further application of Hook’s “common sense” would doubtless illuminate the difference.)

(6) Mr. Goodman does present less evidence about HUAC’s performance than do the earlier books. That is why I said that his book only presents “most” of the record outlined in my review. He gives no real picture of HUAC’s interrogating techniques—my description of the hearing involving witnesses Schneider and Wilkinson was not from his book, but from the hearing record. Neither did he present the evidence, set out in my review, about the emotional instability of some of HUAC’s prize informers. Nor did he have anything to say about the committee’s misuse of claims of self-incrimination by witnesses in the Stamler case. And he has very little to say about the use of HUAC files and dossiers although the information is available in the committee’s annual reports. All of this is very relevant to an appraisal of HUAC whether the ultimate judgment is to abolish it or to perpetuate it.

It is gratifying to know that Mr. Goodman would like to see HUAC abolished. I apologize to him for not having detected that his apparent reason for carefully not saying so in his book was that he was avoiding another category—that of the “professional opponents” of HUAC. 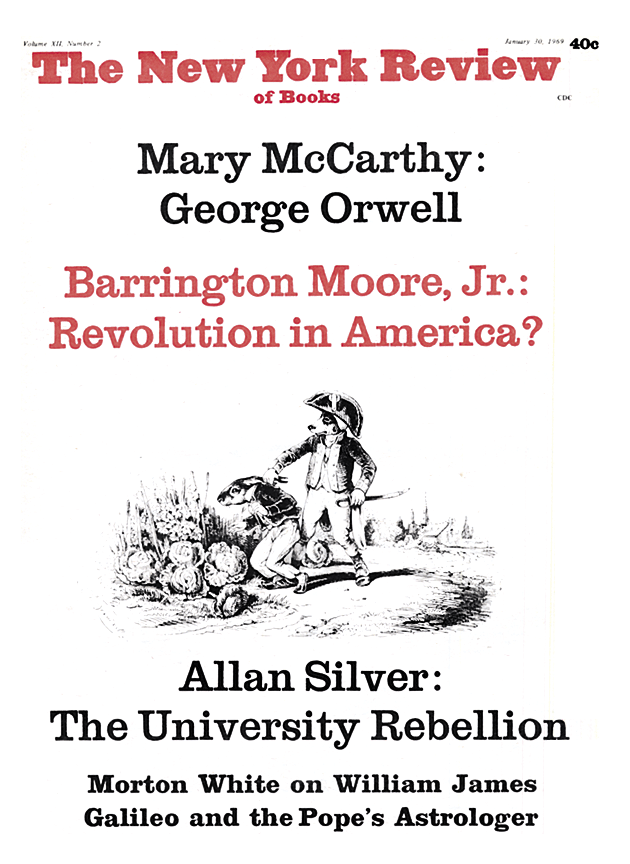 Anthropology on the Warpath: An Exchange