I should like to present evidence about one event in the history of Ocean Hill-Brownsville which bears on the accuracy of the grave charge Martin Mayer has made against Rhody McCoy in Mr. Mayer’s New York Times Magazine article and book on the subject. Mr. Mayer alleges that Mr. McCoy deliberately “helped set…up” a confrontation by perpetrating a “trick” on the Ocean Hill Governing Board, which provoked the Board summarily to transfer nineteen teachers and supervisors in May 1968. Mr. McCoy’s “trick” was to convince the Governing Board that he had asked for these transfers and had been refused, whereas in fact Mr. McCoy had not sought the transfers because the request would have been granted, and thus “most of the confrontation would have been lost.”

Is it true that the transfers would have been granted? Mr. Mayer reports that Superintendent Donovan had once offered to “help McCoy quietly transfer out people he didn’t want” if Mr. McCoy would forward the unwanted names along with a confidential list of reasons. But Mr. McCoy told Mr. Mayer that such requests “would have been pointless, because Donovan would have refused them.”

On this issue—the readiness of 110 Livingston Street to grant the transfers—the following information is pertinent: On Friday, April 26, 1968 (as Mr. Mayer reports), several members of the New York Urban Coalition’s Education Task Force, including the writer, met with three members of Ocean Hill Governing Board and were informed for the first time that the Board intended to transfer out certain teachers. On the very next working morning, Monday, April 29 (as Mr. Mayer does not report), we met with several members of the central Board of Education and Executive Deputy Superintendent Nathan Brown (Mr. Donovan was out of the city), to report on the Governing Board’s intention and to urge action to avoid a major collision. The unhesitating response of Mr. Brown, the second officer in command of the school system, was that the one action which the Superintendent’s office could not take was to effect these transfers during the course of the school year, “quietly” or otherwise, over the objections of the teachers and without a full due process hearing. The members of the central Board appeared to agree with Mr. Brown that such transfers were unthinkable.

In the light of this reaction, is it reasonable to suppose that Mr. Donovan ever promised Mr. McCoy that he would agree to such a mass involuntary transfer during the course of the school year? The improbability of such a commitment is reinforced by Jason Epstein’s report (in The New York Review, March 13) that in March and April 1968 Mr. Donovan and the central Board met with Mr. McCoy and the Governing Board and left the impression that Mr. Donovan would not transfer the unwanted teachers.

Accordingly, Mr. McCoy’s judgment that school-year transfer requests were “pointless” seems sound. If so, the Governing Board was not “tricked” when told that such transfers were unavailable, and we must therefore receive with great skepticism Mr. Mayer’s attempt to prove that the opening salvo at Ocean Hill was fired as the result of a deliberate and manipulative attempt to make a major war.

Professor Simon’s letter is especially interesting in view of a further controversy that has recently emerged in Ocean Hill and which illustrates not only the complexity of these disputes but the severe limits of Superintendent Donovan’s authority in dealing with his own staff. Last summer the State Department of Education announced that Ocean Hill was to become one of four Community Education Centers in New York City financed by the State of New York for the school year 1968-69. These Centers were to provide education outside regular school hours for anyone in the community who was interested and were to be staffed largely by local “paraprofessionals.” The Centers were to cost about $12 million and on September 17 Ocean Hill, for its share, submitted a budget to the New York City Board of Education of $3.4 million.

In November, however, Ocean Hill was told that its allocation was to be only $1.6 million, whereupon the budget was modified accordingly. But on December 19 the administrator of the Ocean Hill CEC discovered accidentally that the Central Board had not submitted Ocean Hill’s request for funds to Albany even though his request had been prepared for submission by December 10, the deadline.

Ocean Hill was thereupon assured by an official of the central Board that Superintendent Donovan would sign and submit its proposal by January 6, but on January 8 it was learned that the Superintendent had not done so. On January 9, however, Donovan increased the Ocean Hill share of the budget to two million but had still not sent the proposed budget to Albany. Also on January 9 various Ocean Hill representatives met with Dr. Lang, the Superintendent in charge of personnel for the Central Board, to discuss the qualifications required for the several job categories in the CEC. Lang announced, however, that he was unprepared to discuss this question. Presumably he was reluctant to authorize salary payments to people who might not qualify under the complex requirements of the school system’s Board of Examiners.

On January 13 Superintendant Donovan assured Ocean Hill that he would ask Dr. Lang to be as flexible as possible where personnel qualifications were concerned, but on January 15 Lang again refused to discuss the personnel question. Meanwhile, he proposed salary levels so low as to make it impossible for Ocean Hill to hire competent people for its program. On January 20 Ocean Hill made certain concessions on salaries but Lang postponed further discussions until the following day. Lang, however, failed to attend this meeting and on January 22 it was learned that he would be out ill for the rest of the week.

By March 24 the question of qualifications and salary levels was still unsettled, but on that day a team of examiners arrived in Ocean Hill from Central headquarters to test candidates for clerical positions in CEC. The team however arrived an hour and a half late and failed to bring the test, which they insisted was to have been supplied by CEC itself. On the same day Lang called to say that Dr. Donovan had been wrong when he said that it would be sufficient for Ocean Hill to submit service reports for its professional personnel. These people, according to Lang, could not be paid until they had been examined at school headquarters, and no one could be paid until this had been done.

Later in the day Donovan called to say that this was not so. The service reports would be sufficient and personnel would be paid retroactive to the day they had been hired. But as it became clear with the original Ocean Hill controversy, Dr. Donovan’s powers over his professional staff are severely limited. Still later in the day Dr. Steinman of central headquarters announced that CEC staff members would receive only two-thirds of their pay until Certificates of Competence had been issued on their behalf by the Central Board. However Dr. Steinman left Ocean Hill without having explained how these certificates were to be acquired. When an Ocean Hill official called Dr. Gamsu, still another Central Board functionary, to find out whether Dr. Steinman was correct on the question of two-thirds pay, Dr. Gamsu said that he was unsure and would call back later.

As of this writing the fate of Ocean Hill’s CEC is still up in the air. Five hundred members of the community who had been promised jobs under the program are still unpaid and Ocean Hill has begun to wonder whether there isn’t a conspiracy at Central headquarters to withhold state funds from the district. 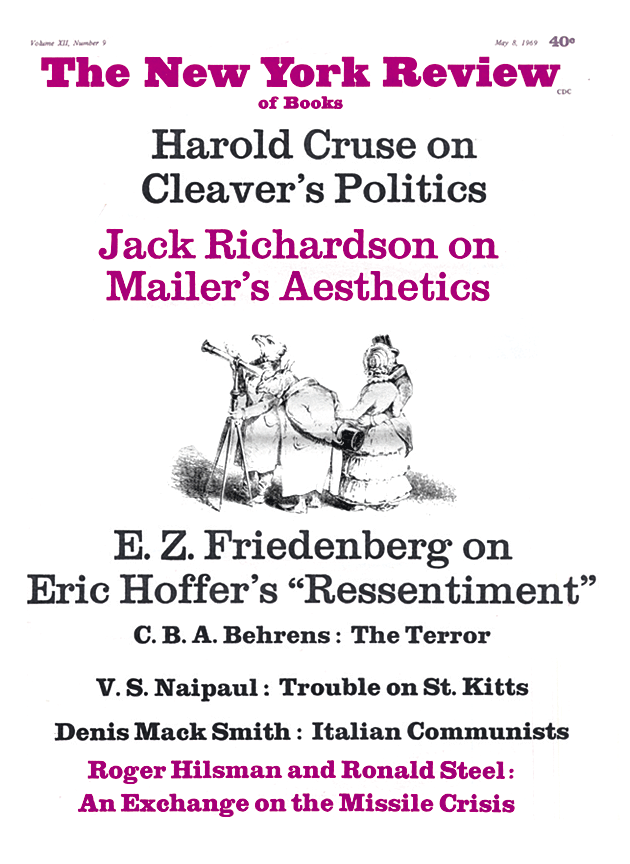 As You Come Over the Hill

An Open Letter to Michael Harrington