The Vision of Jean Genet

In the most literal sense of the phrase, Genet is a writer who has the courage of his convictions. Out of the lives of criminals, and following a tradition in French literature, he has built an erotic mystique, even a kind of metaphysic. Just as Zola was romantically stimulated by the idea of heredity as a fate, and sex as something for the pathetic brute, so Genet is moved by an aspiration to the state of Absolute Evil. One thinks of him as a Vidocq without the gaiety, slipperiness, and hypocrisy—a Vidocq who has read Dostoevsky; the autodidact of the jails.

Absolute Evil implies the existence of Absolute Good at the opposite extreme; but there is no sign of that in his writing. Absolute Evil is not the kingdom of hell. The inhabitants of hell are ourselves, i.e., those who pay our painful, embarrassing, humanistic dues to society and who are compromised by our intellectually dubious committal to virtue, which can be defined by the perpetual smear-word of French polemic: the bourgeois. (Bourgeois equals humanist.) This word has long been anathema in France where categories are part of “logique.” The word cannot be readily matched in England or America, and simply has associations of the grotesque in Germany. Although it has a definite place in Marxist hagiography, it is hard to appoint a certain place for it in our empiricism. Some believe that its emotional force in France comes from the violent overthrow of the Commune in 1871. Possibly the ferocity, the trim, pedantic obduracy of the French middle class, owes a great deal to its roots in the satisfactions of a successful peasantry. (They got what they wanted after the Revolution and, avariciously, what they have they hold.)

Again, there seems to be a Manichean overtone in discussions about the class: the conflict is between the children of light and the children of darkness. In Genet’s novels, his criminals, traitors, male prostitutes, pimps, collaborators, and Nazis are known by adjectives that convey light and brightness. Those of us who close his works in anger and disgust at this sacrilege live in the outer darkness of right thinking. Hell is not an extreme; it is in the middle.

Absolutists put their money on Being rather than Action: they are after our souls. If Genet can be said to have mystical claims they are in his interest in the “dark night” of the soul; but the soul, in Christian thought, emerges from its “dark night”—see the lives of the saints. Genet’s murderers and cheats do not emerge. They live out a drama impenetrable to others. For Genet’s experiences as a thief, a reformatory boy and burglar, and one who has seen murder (but is not a murderer) have taught him—because he is a gifted man, a sort of poet and rhetorician—that criminals are a stupid, dingy lot of short-sighted morons. Their “dark night” is really a grey night. Having opted out of society, and narrowed by their monotonous hatreds, they find their momentarily experienced liberty is a wilderness: they long for punishment in the extremely complacent society of prison in which they spend most of their lives if they survive the treacheries of their friends. (Anyone who has had a passing acquaintance with the convicted knows that many consider the wicked are outside of jail.) Genet draws portraits brilliantly in detail with all the passion and parti pris of prison society: he admires what can be called the virtu of the profession like an aesthete. A good burglar may be self-condemned, but he has pride in his superstitions, his techniques and rituals. Reform is a loss of skill. To be incurable is both a fate and a vanity. He is unknown to loyalty, mercy, pity, or charity (i.e., bonté).

How does it come about that Genet, a writer so committed to his theme, is able to be without illusions about the criminal? A Sade sees himself as a revolutionary energy; a Dostoevsky, who can so thoroughly abandon himself, for a time, in the idea of “beyond good and evil,” sees Christ and Salvation. Genet sees nothing. He is a total nihilist, angered by ennui. In a really admirable exposition, Richard N. Coe describes him as a lucid schizophrenic and makes a very convincing (and anti-Sartre case) for Genet as one living between those disparate poles that at a touch create the electric spark of poetry. Philip Thody, in a cooler but equally searching work*—written, I think, in 1969—contains a little more biographical material, and suggests, if I read him aright, that Genet was a “made” criminal and not a born one, relying on Genet’s words that he became a thief because he was called a thief. It was the result of shock. And that he was able to “cure” himself by a truly astonishing discovery of language; he entered not a moral world, but a world of words and images.

It is certainly true that his prose is very fine, and that his virtuosity as a writer is enormous: he proceeds from criminal ritual to the literary, without losing his innate interest in violence. He has a marked humor. The paradox and the ambiguity that floor the critic who tries to formulate Genet’s thought are the sparks flying off from the brutal hammer-on-anvil of experience. He was born existential. His work is autobiographical but more forcefully so for anticipating the masks, the disguises, the involvement of the reader, assumed by later writers of the nouveau roman.

An important feature, also, is Genet’s preoccupation with Things. Things exist, have a magnetism, and are as inciting as persons: the majority of his characters are homosexual, but it is the holster, the belt, the jackboot, the badge, the uniform of the male lover that allure: the picturesque argot of buggery, its unecstatic clinical detail, are themselves like objects in a “black” museum at police headquarters. It is true there is a passing sexual tenderness and naïvety. Particularly in a book like Funeral Rites—which critics think to be a falling off and which shows an ambiguous and provocative attraction to Nazism—one seems to be in a collector’s gallery. In defense of this book, it must be said we have forgotten the seamy side of the Liberation in Paris.

The poetry of Genet’s novels is fragmentary. This has a special force, because of the abrupt and necessarily fragmentary nature of the criminal’s life: he never sees beyond his nose as he heads toward punishment or his own death. Genet’s virtuosity lies in his rapid management of rapid discursiveness and sudden clinching scenes, in the skill in moving back and forward in time, and in the convincing though arbitrary way in which the author takes himself with a sort of effrontery from the outside to the inside of character. The defects are sudden descents into banal reflection and in over-all pretentiousness. We are not all that far from the idealization of the criminal. There is a theatrical suggestion—especially in the German references, the hatred of France, and so on—of “the twilight of the Gods.”

And it is both the originality and the tedium of the writer that his impulse is one of personal revenge. (There are scarcely any women in Genet’s novels and although this is due to his homosexuality, which is passive and feminine, it has an obvious root in his rage at being abandoned by his mother, who was a prostitute.) The hymn of hate springs from sterility, though it is relieved by a savage humor and by one or two remarkable big scenes. The locale is always deeply there: I think of the eerie seduction in the Tiergarten, or the horror of the hot, stink of shooting, fear, and rape in the long rooftop scene in the Paris street-fighting.

Genet is the natural product of an age of violence, a natural cult-figure for those who feel guilty because they have escaped martyrdom. He offers everything to the voyeur in ourselves. Sartre tried to push him into politics but except in his play The Blacks that has not borne results. I find the interest in the orgies of disgust in the novels, and the attempt to shock us by half-arguing for Hitler and the Nazis, monotonous as scandals. One gets in the novels something of the self-caressing dreariness and pettiness that date, I suppose, from a much better writer like Restif de la Bretonne. The lack of charity is an appalling defect and one rebels against the claustrophobia. His characteristic material is seen to my mind to far better effect in the theater, simply because the theater is drastic and has design. The scene in Funeral Rites where the drunken Nazi shoots at his Other Self in the mirror is pure theater. Genet’s rather portentous conceit of the Self, the mirror Self and the Double, works well in the theater and draws out his extraordinary technical skill. It emphasizes the dream or nightmare frame in which his violence is set, and which establishes him as an artist as well as a pornographer. The Maids is as good as anything in Strindberg’s theater.

Without the aid of commentators like Thody and of Coe I do not get far with the novels. Coe warns us not to stop at the fact that Genet’s novels interpret criminal pyschology, and tells us to see the metaphysical symbolism. This last foxes me. Genet’s paradoxes and contradictions seem to be native to a poet and not a thinker. It is a good argument that Genet is a taboo breaker rather than a law-breaker.

What I got from Funeral Rites, after its view of the hoodlum temperament and passive homosexuality, was his capacity to evoke a really frightening sadness, the tristesse of the incurable. It is a novel about hate and sex, lived by people grieving in the void or limbo. The void is all the worse for being small, a place—if that is the word—where people exist only as bodies with sexual or bullet holes in them, whose “être” or “being” is as trivial as bits of torn-up paper flying in the wind. The sadness of living and grieving beyond good or evil is exactly and even vaingloriously perceived by Genet. It appears—I judge from what both Coe and Thody say—that there is a dawning virility in his work. This may be so: it would be striking to see Genet achieving the masculine instinct for responsibility and a sense of proportion, but perhaps that would silence him as a writer. Inside his great vanity, a serious artist is clearly at grips with his conflicts. 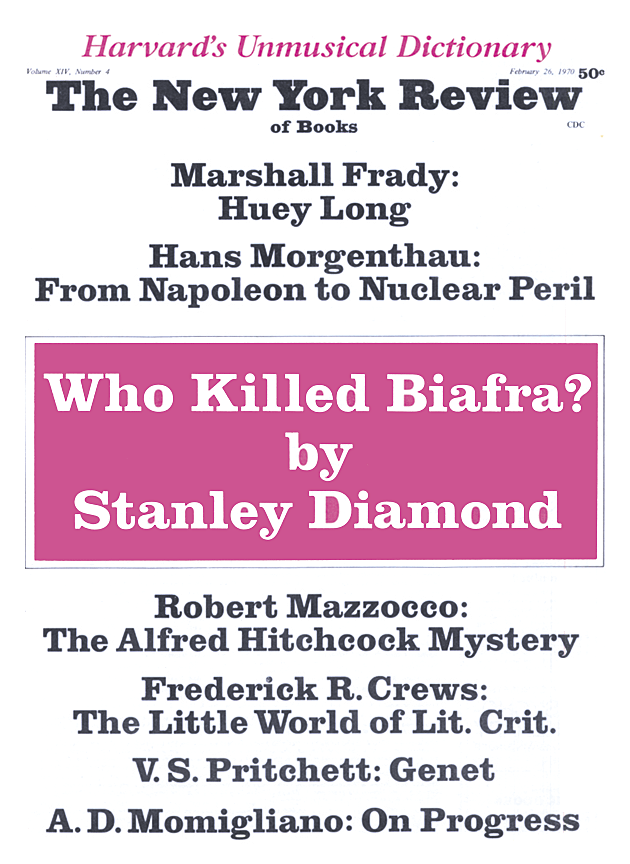