One would believe that composer-critic Virgil Thomson is by now mature enough and sufficiently experienced to check his information when he sets out to reduce Charles Ives to manageable proportions [NYR, May 21], as he has previously pruned and trimmed Arnold Schoenberg and Igor Stravinsky to fit as less trouble-some competitors in his French formal garden.

The procedure of denigration he uses is not easy to get at. When he dismisses the “Concord” Sonata as “seemingly improvisational (even aleatory) in a way that today’s youth finds irresistible for effects of grandeur, anarchy, and chaos,” he puts out of consideration the experience of those pianists, like John Kirkpatrick and my wife Frances Mullen Yates, who have been performing this work for more than thirty years, or Easley Blackwood, who has been studying and playing this sonata since around 1951.

Thomson’s succeeding rough analysis of “musical materials…that simply will not develop…none sticks in memory as an evolving thought” gives evidence that he understands the sonata no better than when, in the early 1940s, he first reviewed it. The continuous transformation of motives which combine to shape the four diverse movements in their unusual structural balance has eluded his comprehension. The opening of the “Concord” Sonata is, as he says, a case in point. It includes in one neatly organized, brief package the motival elements to sustain a sonata as large and exactly as long as Beethoven’s “Hammerklavier.” These motival elements are structural variants of the four-note motive which opens the Beethoven Fifth Symphony. I have praised Virgil Thomson’s music often enough to be able to say that his art is weakest in those areas where Ives shows the greatest strength.

Indeed, I might not have come into this argument if Thomson had not summoned my tears as evidence for his belief that “the jamborees of patriotic marches and evangelical hymns…and many another calling forth of early memories are so deeply nostalgic for Americans that the California critic Peter Yates could sum them up as the only American music that makes him cry.”

As a matter of fact, it is the transcendent sound of Ives’s music which produces in me this embarrassing effect. This happened to me first in the winter of 1938-9, the first time I heard an Ives work in performance; Radiana Pazmor sang “General William Booth Enters Heaven,” and I was for it. “Fountain,” the principal tune, had for me no nostalgic references; being, unlike Mr. Thomson, an Anglican from Canada, I had never heard it. The refrain, “Are you washed in the blood of the Lamb,” was a completely fresh experience.

When Bernstein’s first broadcast of Ives’s Second Symphony caused me again to overflow, it was certainly not because I recognized the hints of “Camptown Races.” And when, still later, sitting beside my daughter-in-law, I made myself a watery spectacle, it was the voices and overarching brass in the “Harvest Home Chorales,” not any familiar melody, which so reduced me. If it’s the nostalgia and not the sound which has brought Mr. Thomson, too, to weeping, we share a sympathetic response but not the cause.

As for Mr. Thomson’s information: Mrs. Ives, the former Harmony Twichell, did not spell her name “Harmonie.” To say that Ives formed his insurance firm with “a partner named Myrick” is to pass over, as if obliviously, a remarkable man, a distinguished figure not only in insurance but also in international tennis.

“For a year or so he had played church organs”—Ives became a church organist around age thirteen, was soon playing regular services for pay, continued this self-supporting job while at Yale and on into his early years in New York. (Mr. Thomson began his career as a motion picture pianist and church organist at about the same age.) The choral music Ives wrote for his church choir, edited from manuscript during the last few years by choral conductor Gregg Smith with John Kirkpatrick, equals in quality and daring his best instrumental music. (I should say in passing that the first record of this choral music, Columbia MS 6921, ML 6321, was mangled in processing from the superb original performance tapes and is for the most part musically unintelligible.)

Mr. Thomson attributes the present success of Ives’s scores to “the loving editorial hands of Lou Harrison” etc. I have had it from Lou Harrison in forceful language that this is not so; the music is that of Ives and Harrison helped transfer it from manuscript to page. As for the “loving conductor’s hands,” I believe it is now becoming evident that conductorial emendations have been no more helpful for Ives than for Bruckner. The younger and superior Ives conductors, Lukas Foss or Michael Tilson Thomas, take their Ives straight, to the listener’s great advantage.

Thomson writes: “Ives’s music does show the marks of haste, and also of limited reflection.” A reading of Essays Before a Sonata—the title does not imply, as Thomson suggests, that the essays were written before but that they were meant to be read as a preface or introduction to the sonata—should convince an open-minded reader that Ives reflected deliberately and at length on the “substance” of his art. Mr. Thomson reads superficially when he equates Ives’s “substance” with “sincerity.” And Lou Harrison has testified, in the text of the record envelope of the violin sonatas played by Druian and Simms, that Ives knew by memory the place on the page of every note in his manuscript.

I have nothing to answer to Mr. Thomson’s prophecy that the music of MacDowell may survive that of Ives, but if the reason is “gentility, not giving one’s all to one’s art,” the statement is a presumptuous and malicious absurdity. I would be angry at anyone who should write such a thing about Mr. Thomson’s music. Ives was a Yankee gentleman, but he despised “gentility.” His favorite denigrative epithet was “nice.” Nicety is characteristic of French formal gardens and Virgil Thomson’s music, if not always of his criticism.

It was pretty certain that someone deeply attached to Charles Ives or to his music would cry out in pain, and I half suspected it might be Professor Yates. I had wondered also what Lou Harrison would say; but when I visited him lately in California he appeared to be less exercised about my opinions of individual works, many of which he shares, than about my analysis of the Ives career strategy, which he admits must have existed but which he says he “might have stated differently.” The highly knowledgeable Elliott Carter, Ivesian since the 1920s, surprised me by being “entirely in agreement with everything [I] said.”

Professor Yates’s indictments, on the other hand, are numerous.

Harrison “worked on,” as he puts it, the Second Symphony and the “Browning” Overture, both of these with Henry Cowell, though he “did more of the reconstructing than Henry.” He “edited [his word] completely the Second String Quartet, the War March (a League of Composers commission of 1943 written much earlier), three or four Psalms for orchestra and organ, the First Piano Sonata and the Third Symphony.” The latter work he also conducted, recorded, and guided through publication. He had chosen for his ministrations the First Piano Sonata rather than the Second (or “Concord”) Sonata because he preferred it, and also because he judged it might need especial care, in view of the attentions already being lavished on the “possibly inferior” one which bore the names of Emerson, Thoreau, Hawthorne, and the Alcotts—an irresistible New England galaxy.

As for differences of opinion between Mr. Yates and myself regarding matters of analysis and of interpretation, I have no comment. Nor do I feel required to admit any intention of “pruning and trimming” music’s great men down to “manageable proportions.”

As for there being something inferior about my alleged toleration for the “French formal garden,” such arguments by analogy are unworthy of the good professor. For his information, the formal garden, Italian or French, was the norm for Bach’s and Haydn’s and Mozart’s time. The informal garden, or jardin anglais, is a Romantic style, very pretty but only suitable to climates with a notable rainfall. And the “German garden,” containing both flowers for cutting and vegetables for the table, is not an ideal metaphor for monumental music. I wonder what kind of garden he thinks Ives is. An untamed forest? Could be. 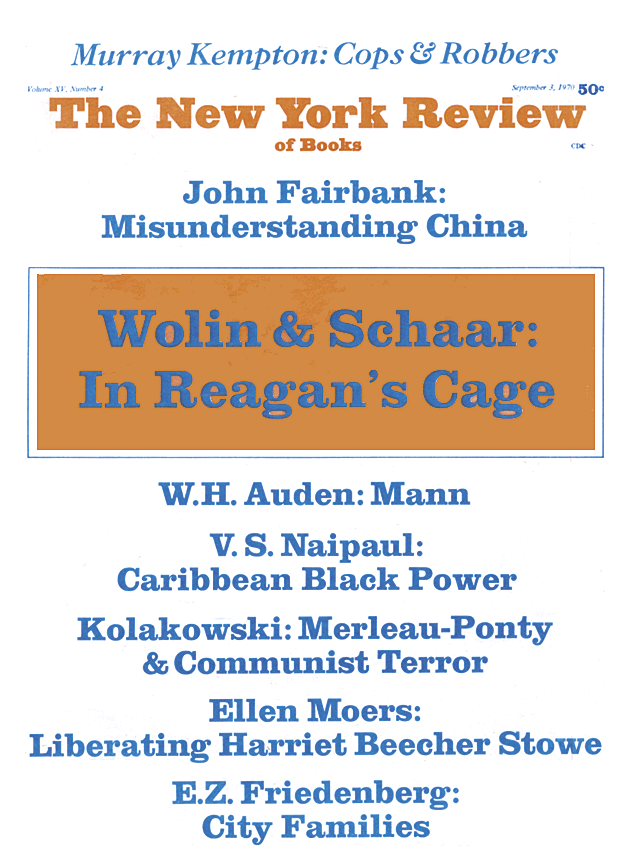