Dooms menace from tumults. Who’s immune
among our mightier of headed men?
Chary with his loins
womanward, he begot us an enigma.

Often pretended he was absentminded
whenas he couldn’t hear; and often was.
‘…always he, he everywhere, as one says of Napoleon’
(Sir John Russell in ’21 hearing a Trio)

O migratory rooms, the unworthy brothers, the worthless nephew!
One time his landlord tipped a hat to him;
Beethoven moved. Awkward & plangent
charged to the Archduke’s foot,—who told his court ‘Leave him alone.’

My unpretending love’s the B flat major
by the old Budapest done. Schnabel did record
the Diabelli varia. I can’t get a copy.
Then there’s Casals I have, 101, both parts.

Moments are, early on in the 4th Piano Concerto
show him at his unrivalled middle best.
It does go up and up, and down lingeringly.
Miser & Timon-giving, by queer turns.

They wanted him London, partout. ‘Too late,’ ‘Too late’
he muttered, and mimicked piano-playing
Prodigious, so he never knew his age
his father’d lied about.

Whatever his kindness to Rossini and contempt for Italians,
if down he sat a while in an exquisite chair
it had to be thrown out (five witnesses,
none of whom says quite why).

O did he sleep sound? Heavy, heavy that.
Waked at 3:30 not by some sonata
but by a botched rehearsal of the Eighth
where all thing has to go right

(Koussevitzky will make it, Master; lie back down)

Lies of his fluency from Betty von Arnim
to eager Goethe, who’d not met the man.
Fact is, he stumbled at the start
and in the sequence, stumbled in the middle,

Often unsure at the end—shown by his wilderness
on-sketchings encrusted like Tolstoy (not Mozart:
who’d, ripping napkins, the whole strict in mind
before notes serried; limitationless, unlike you).

Inundations out from ground zero.
Back from an over-wealth, the simplification of Necessity.
When brother Johann signed ‘Real Estate Owner,’ you: ‘Brain owner.’
And what, among fumbling notes, in the nights, did you read?

Coffee and tallow spot your Odyssey
though, and when Schindler was an arse to ask
your drift in Opus 31 and the Appassionata
you uttered at him, cheerful, ‘Just read The Tempest.’

Thinking presides, some think now,—only, presides—
at the debate of the Instincts; but presides,
over powers, over love, hurt-back.
You grumbled: ‘Religion and Figured Bass are closed concepts.
Don’t argue.’

To disabuse the ‘Heiligerdankgesang’?
Men up to now sometimes weep openly.
Tortured your surly star to sing impossibly
against the whole (small) thwarting orchestra.
One chord thrusts, as it must

find allies, foes, resolve, in subdued crescendo.
Unfazed, you built-in the improbable.
You clowned. You made throats swallow
and shivered the backs of necks.
You made quiver with glee, at will; not long.
This world is of male energy male pain.

Softnesses, also yours, which becomes us.
What stayed your chosen instrument? The ‘cello?
At two points. At others, the forte-piano.
At others, the fiddles & viola & ‘cello.

I’m hard to you, odd nights. I bulge my brain,
my shut chest already suffers,—so I play blues
and Haydn whom you—both the which touch but they don’t ache me.
I’m less inured in your disaster corner,
Master. You interfere.
O yes we interfere
or we’re mere sweetening: what? the alkali lives
around and after ours. Sleeking down nerves
Passing time dreaming. And you did do that too.
There hover Things cannot be banned by you;
damned few.
If we take our head in our ears and listen
Ears! Ears! the Devil paddled in you

heard not a hill flute or a shepherd sing!
tensing your vision onto an alarm
of gravid measures, sequent to demure,
all we fall, absently foreknowing…
You force a blurt: Who was I?
Am I these tutti, am I this rallentando?
This entrance of the oboe?
I am all these
the sane man makes reply on the locked ward.

Did ever you more than (clearly) cope odd women?
save clumsy uncommitted overtures
au moins à Joséphine? save the world-famous unsent
or when retrieved and past-death-treasured letter?

Deception spared. No doubt he took one look:
‘Not mine; I can’t make a kroner there.’
Straightforward staves, dark bars,
late motions toward the illegible. Musical thighs,

spared deep age. Out at prime, in a storm
inaudible thunder he went, upon his height.
The other day I called our chief prose-writer
at home a thousand miles off and began
‘How are you, Sir?’ out of three decades’ amity

‘I’m OLD,’ he said. Neither of us laughed.
Spared deep age, Beethoven. I wish you’d caught
young Schubert’s last chamberworks and the Winterreise
you could have read through, puffing.

Ah but the indignities you flew free from,
your self-abasements even would increase
together with your temper, evil already,
‘some person of bad character, churlish & eccentric’
For refusing to scribble a word of introduction:
‘He is an unlicked bear’—almost Sam Johnson.

An entertainer, a Molière, in the onset
under too nearly Mozart’s aegis,
the mysteries of Oedipus old were not beyond you.
Islands of suffering & disenchantment & enchantment.

But the brother charged the dying brother board & lodging.
Bedbugs biting, stench, unquenchable thirst,
ungovernable swelling. Then the great Malfatti
gave up on, and accorded frozen punch ad lib.

Your body-filth flowed on to the middle of the floor
‘I shall, no doubt, soon be going above’
sweat beading you, gasping of Shakespeare,
knocking over the picture of Haydn’s birthplace.

They said you died. ‘20,000 persons of every class
clashed at the gates of the house of mourning, till they locked them.
Franz Schubert stalked the five hundred feet to the church.
It’s a lie! You’re all over my wall!
You march and chant around here! I hear your thighs.

from Delusions, etc. by John Berryman, to be published by Farrar, 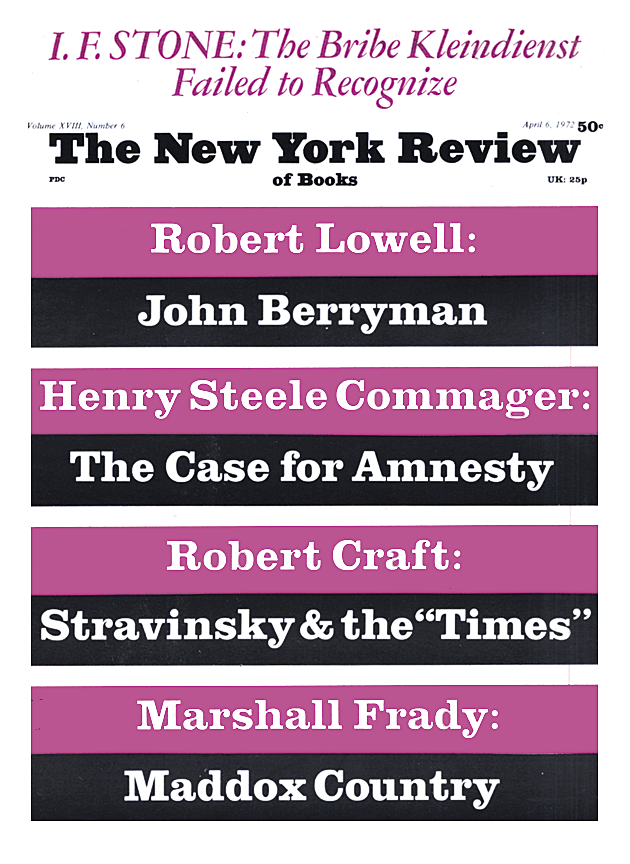 Copyright © 1972 by the Estate of John Berryman.