In response to a letter from Trevor-Roper published in your issue of August 31, I wish emphatically to reject as baseless and unfounded his allegations that I copied from a piece by him published in the New Statesman early in 1959. I have no intention of descending to the level of sneers and name-calling, but I must point out that all he does is to exhibit his ignorance. I worked on witchcraft and related matters long before Trevor-Roper published his piece in the New Statesman. His snide reference to “pompous and erudite footnotes” indicates his ignorance of the fact that Henry E. Sigerist, mentioned in one footnote, was my teacher and friend, and that Sigerist and I discussed witchcraft and its various aspects long before Trevor-Roper appeared on the scene. Sigerist’s paper on impotence caused by witchcraft was published in 1943, and he sent me a reprint at that time.

Trevor-Roper is also ignorant of the fact that in the late 1930s and in the 1940s I was studying the works of Paracelsus and the cultural history of Central Europe in the fifteenth, sixteenth and seventeenth centuries. In 1941, Sigerist together with Gregory Zilboorg, Lilian Temkin, and myself issued Four Treatises of Paracelsus which contains my translation of the Paracelsian book on miners’ diseases, as well as Sigerist’s translation of the book on “Nymphs, Sylphs…and other Spirits.” Both treatises refer to spirits in mines and mountains and their role in causing disease in human beings. My History of Miners’ Diseases published in 1943 contains two passages on this topic (pp. 63-64, 86). I did not have to wait for Trevor-Roper’s piece of 1959 to be informed on the subject. My continuing interest in and study of European witchcraft is further evidenced by an article of mine published in 1947-1948, “Dream and Nightmare in Reginald Scot’s Discovery of Witchcraft,” Ciba Symposia 9:787-790, 1947-1948. I might note in passing that the volume in which this article appeared also contained a contribution on the nightmare which deals with succubi, incubi and witches and was not written by Trevor-Roper. I have also dealt with witchcraft in the context of shared psychopathology in the volume Causes of Mental Disorders: A Review of Epidemiological Knowledge, 1959, New York, Milbank Fund, 1961, pp. 366-376.

In short, over a period of about two decades I have investigated European witchcraft and related subjects, and written on various aspects, prior to the publication of Trevor-Roper’s piece in the New Statesman. Whatever similarity exists between this contribution and anything I have written readers may judge for themselves. Moreover, to return to the point whether Trevor-Roper influenced my paper, I wish to note that in an eighteen-page article all he can point to as “evidence” are two paragraphs of no great moment. The paper on witchcraft is the first part of a two part study on psychopathology in the social process which I prepared in 1957-1958. As far as I can make out Trevor-Roper’s 1967 essay does not bear at all on this subject.

I repeat that I did not read Trevor-Roper’s piece (nor do I know what it was since he does not specify). My own studies and those of colleagues whom I mentioned, as well as sources indicated, provided the basis for what I wrote. In this connection I might mention that a number of the sources which I cited in 1960 were also cited by Trevor-Roper in 1967. Indeed many other authors have used these sources, e.g., Hansen, Lea, Soldan-Heppe, Riezler, so that he is not as original as he thinks he is.

As far as I am concerned, the matter is closed, and I do not intend to respond to any further statements by Trevor-Roper. 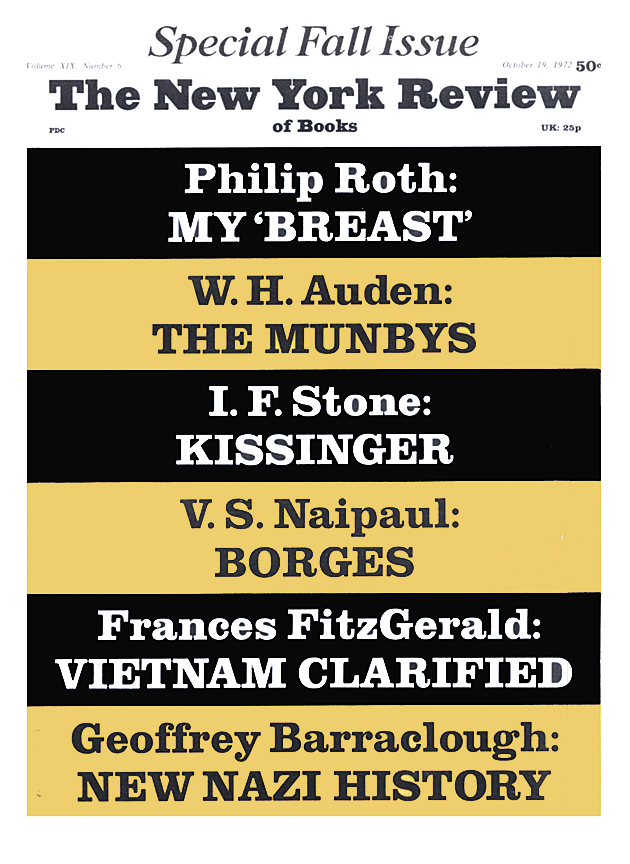 Killed by the Panic

The Uses and Abuses of Art History

‘Bodyguard of Lies’: An Exchange

A Prince of the Essay